The life and death of Mary, Queen of Scots has given rise to countless legends over the years, with many places and objects acquiring a new glamour through their association with her - genuine or otherwise. In our collection we have many items that have been linked to the famous Queen, but is this association fact or myth?

A tour of objects associated with Mary, Queen of Scots

Anna Groundwater, Principal Curator of Renaissance & Early Modern History, takes you on a tour of the key objects associated with Mary Queen of Scots in the Renaissance Gallery at the National Museum of Scotland. She explores how these jewels, coins, and carvings tell the story of Mary’s life, and considers how the surrounding displays contextualise Mary’s years in Scotland.

This gold necklace, locket and pendant date from the late 16th century. Known as the 'Penicuik Jewels', they are said to have belonged to Mary, Queen of Scots. They were long preserved by the Clerks of Penicuik as relics of Mary. 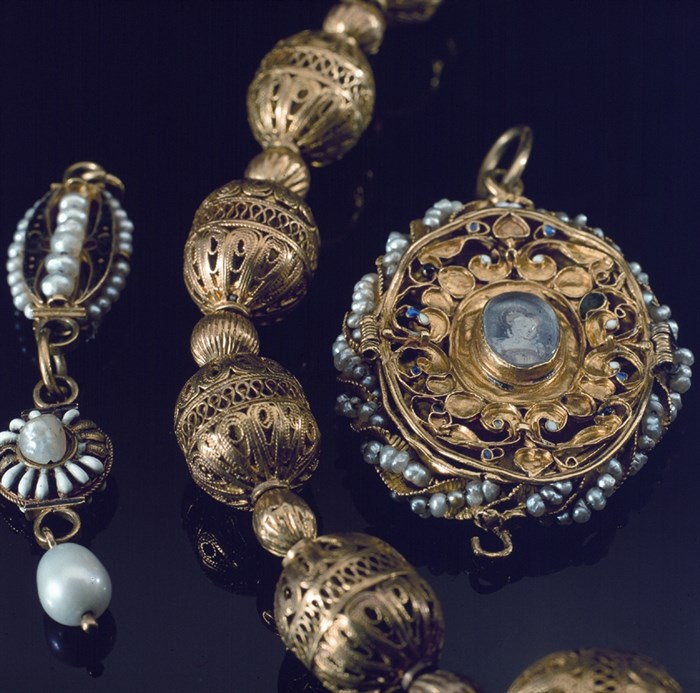 The necklace has 14 large oval beads of filigree work divided by smaller circular beads and would have originally contained perfume. The enamelled locket has painted miniatures showing a man and a woman, said to be Mary and her son James. The pendant was probably formerly attached to the locket.

The Clerks of Penicuik had a connection with Mary, Queen of Scots, through marriage. In the 17th century, a member of the family married a granddaughter of Giles Mowbray, one of the Queen's servants during her English imprisonment. It is possible that the necklace is made from the beads of bracelets given by the Queen to Giles Mowbray, just before her death in 1587.

Mary took great pleasure in a magnificent jewellery collection. She brought many splendid pieces from France in 1561. In Scotland she inherited jewels from her mother and continued to buy new items: there were finger rings, pendants, bracelets, belts, earrings, buttons, crucifixes, rosaries and furs complete with bejewelled gold heads. All were made of gold, enriched with enamelling in bright colours and set with precious stones especially rubies, diamonds, emeralds and sapphires.

Given the provenance, it's likely that the Mary, Queen of Scots connection is true.

The Penicuik Jewels on loan

The Penicuik Jewels are currently on display at the British Library in London’s major exhibition, Elizabeth and Mary: Royal Cousins, Rival Queens, which runs from 8 October 2021 to 20 February 2022.

This mid-16th century oak cabinet, finely decorated in Renaissance style, was imported from France and is said to have belonged to Mary, Queen of Scots. It was long preserved by the Hepburns of Smeaton, supporters of the Queen.

The cabinet is finely carved with medallion panels and has a different character on each panel. The Virgin and Child are placed centrally at the top of the cupboard.

Given that this is a French Renaissance piece of furniture and 16th century, it could have belonged to Mary, Queen of Scots. 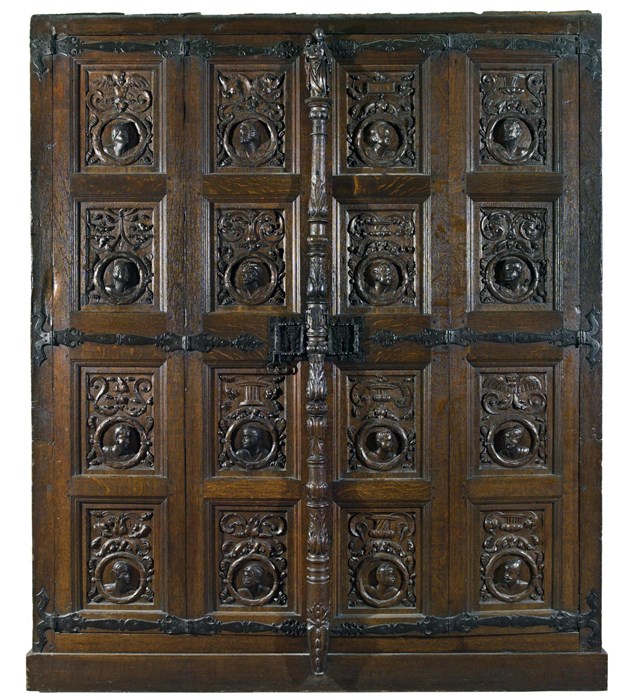 This silver crucifix, decorated with niello and mounted on a plain ebony cross, was found in a bedroom at Craigmillar Castle which Mary was known to have visited.

Given where the crucifix was found, it is likely that the Mary, Queen of Scots connection is true. 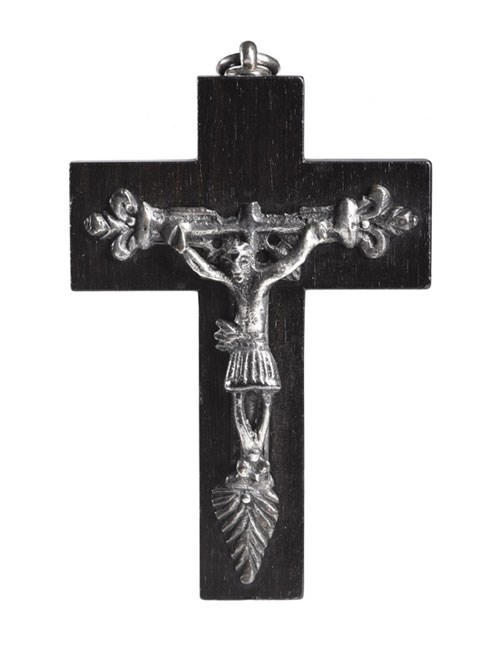 This necklace came into the possession of the Sheriff of Northampton in the year of the Queen's execution. Mary, Queen of Scots was tried and found guilty of treason and was executed on 7 February 1587 at Fotheringhay Castle, Northamptonshire.

It is not clear if Mary gave this locket to the Sheriff of Northampton, but she was generous to her friends and people around her and delighted in giving jewellery and other gifts to them.

Given the provenance of this piece of jewellery, it is likely that the Mary, Queen of Scots connection is true. 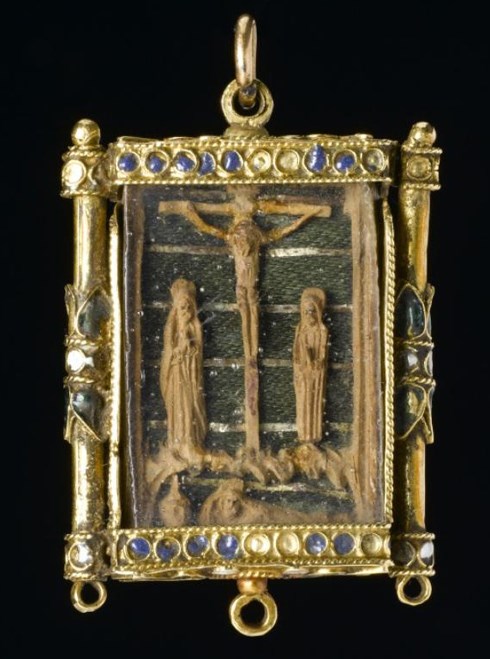 On an inlaid silver oval, an inscription states that this oak cradle is from Linlithgow Palace and belonged to Mary, Queen of Scots.

It is thought, however, that the cradle was made around 50 years after Mary's death.

As the cradle dates from the 17th century, it could not have belonged to Mary, Queen of Scots as she died in 1587. 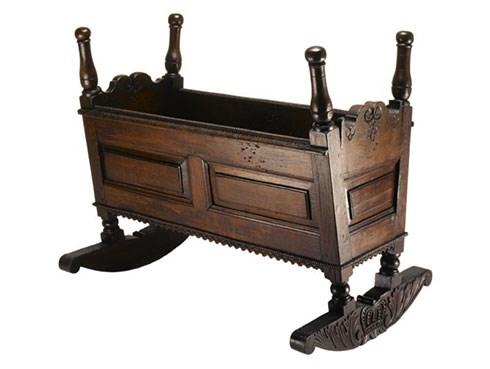 Mary married Henry Stuart, Lord Darnley, her first cousin at Holyrood Palace on 29 July 1565. It was a turbulent marriage. Their son James was born on 19 June 1566 but within two years Lord Darnley was to die. In February 1567, he was recuperating after an illness in a house at Kirk o' Field within the city wall of Edinburgh, when an explosion occurred in the house, and Darnley was found dead in the garden. The site of the murder is only metres from the present day site of National Museum of Scotland!

This silver one-third ryal was minted at Edinburgh in 1565 ,in the reign of Mary, Queen of Scots, during her marriage to Henry, Lord Darnley. The coin was worth ten shillings Scots. The obverse of the coin (left) shows Darnley’s name before that of Mary and his portrait on the left-hand side, in the space conventionally reserved for the reigning monarch. These coins were quickly withdrawn form circulation, but they proved that Darnley had pretentions to the Crown Matrimonial.

This coin, minted in Edinburgh in 1566, replaced the coin minted in 1565. Mary's name now comes before Henry's. The reverse of this coin (right) shows a tortoise climbing a palm tree. The Latin inscription below translates as: 'Glory gives strength' while that around the edge translates as: 'Let God arise and let His enemies be scattered' (from Psalm 68). The tortoise design was well known to Mary, and she embroidered it on the Marian Hanging while imprisoned in England. Some speculate that it refers to Darnley's pretensions to the Crown Matrimonial. Mary's coinage is divisible into five phases, reflecting her early life, two marriages and two widowhoods. During her reign numerous issues appeared in gold, silver and base metal, many of them comprising denominations never previously struck.

The 1565 coin was minted to commemorate the wedding of Mary, Queen of Scots to Lord Darnley on 29 July.

Mary's apartments in the Palace of Holyrood, Edinburgh, where she spent most of her time, would have been used for dining and entertaining. The walls were hung with tapestries similar to the Morton valances.

These valances or bed hangings are the work of a Scottish embroidery workshop, and date to about 1580. They are done in a tent stitch in worsted and probably show incidents from The Old Testament or classical mythology. The figures are, however, clad in French-style costume of the mid-16th century.

The Morton valances are similar to those Mary would have had, but there is no direct connection. 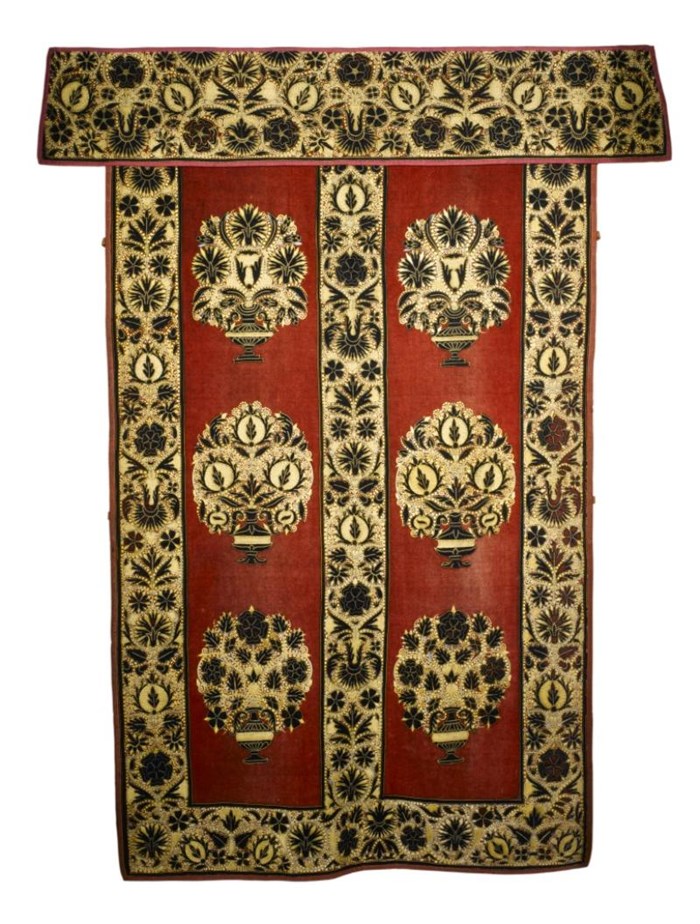 Like all women of the period, Mary was trained in the art of needlework and sat working at this during sessions of her Privy Council. Mary could not have created all of the embroidery attributed to her, including this magnificent set of wall hangings, now known to be the work of professional embroiderers. They were probably made in an Edinburgh workshop in the late 16th or early 17th century.

This set of hangings was made to decorate and warm a bedroom wall but they have been altered over the centuries and may also have been used for a bed. They are part of a set that is now divided between the Burrell Collection and St Leonard's school in St Andrews.

The Lochleven hangings are now known not to have been made by Mary. 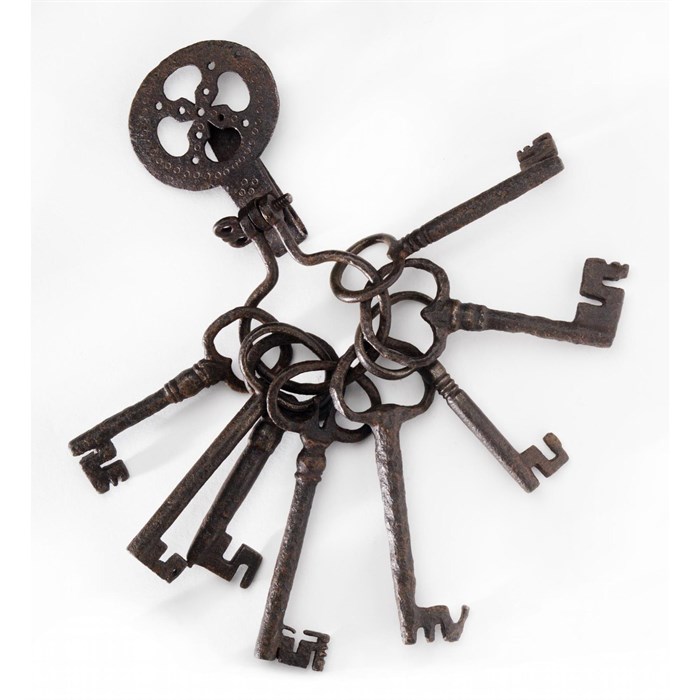 These iron keys - a bunch of eight cabinet keys and a door key - were found in Loch Leven in Kinross-shire. They date from the 16th century. It has been suggested that these are keys of Loch Leven Castle thrown away when Mary, Queen of Scots made her escape from captivity in 1568.

Mary was associated with the death of her second husband, Lord Darnley and was imprisoned at Lochleven Castle. On 24 July 1567, she was compelled to abdicate in favour of her son who became King James VI of Scotland.

With the help of a few brave friends, Mary escaped from the castle and immediately rallied a large force behind her. They engaged in battle at Langside on 13 May 1568, and were soundly beaten by the army led by the Protestant lords. At this point Mary decided to leave Scotland and go to England to beg support from her cousin Elizabeth.

Although associated with Mary, Queen of Scots' escape from Lochleven Castle, it is unlikely that these keys were from the castle.

The pendant was acquired with Art Fund support

The Penicuik jewels are part of