Gold object of the week No. 4

In this week when Welsh gold has gained worldwide fame in the ring of a certain new Royal Highness, we bring you a gold item found in Wales.

When we encounter beautiful gold artefacts from the past, it’s easy to forget that they must have been shaped and worked from an ingot of raw material. The ‘finger ingot’ from Ystradowen in the Vale of Glamorgan, Wales, is one such object.

It’s a slender gold bar in roughly the shape of a finger that was found while metal-detecting. It’s about 51mm long and weighs 22g. On the face of it, this object is relatively unremarkable (especially when compared to some of our previous objects!), but it has lots to tell us about the nature of gold-working and production.

The weight of the ingot is consistent with some bracelets and rings, so perhaps the Ystradowen object was destined to be a piece of jewellery? The isolated nature of the find may suggest it was part of a small-scale goldsmithing practice.

As a stray find, it is difficult to date the Ystradowen ingot, but a similar object has been found in a Late Bronze Age hoard from Llanarmon-yn-Iâl, Denbighshire, Wales, dated to about 1000–800 BC. This hoard contained a similar gold ingot that was deliberately placed inside a socketed axehead with another gold object, as well as two Late Bronze Age gold bracelets buried nearby. 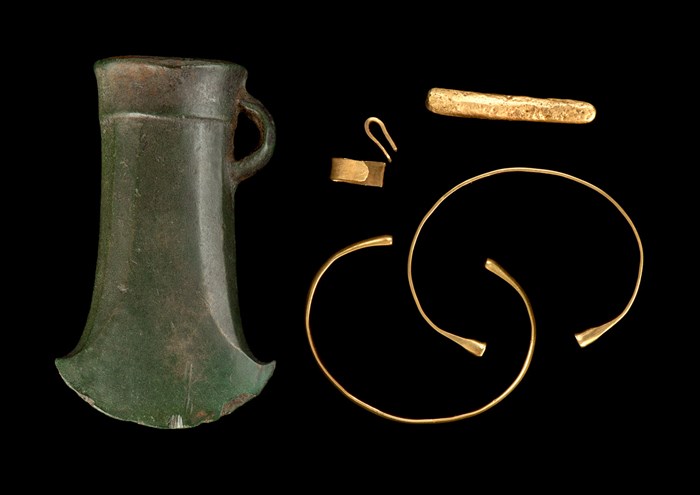 Analysis of the gold in finger ingots is also important, as this can help tell us whether these can truly be considered Bronze Age objects. The analysis done on the Ystradowen ingot – a process known as energy dispersive X-ray fluorescence analysis – confirms that the gold is of a composition that is characteristic for Late Bronze Age gold.

Finger ingots are increasingly being found and recognised across the country, with examples now known from Devon, Kent, Buckinghamshire, and Wiltshire. Apart from Devon, these are areas where no natural sources of gold exist, but where we often find finished gold products. This indicates the gold must have been traded and moved across the country. The ingots thus tell an important story of how gold may have been moved. Clearly, not all objects were traded in their finished forms, but gold was sometimes moved as a raw material. 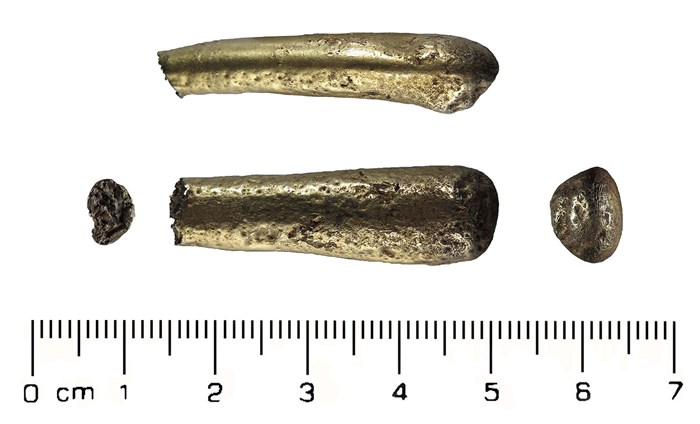 The Ystradowen example is a good example of this, as the gold sources in Wales are largely confined to the west and north of Wales; Ystradowen is in the south-east. Of course, we don’t know for certain that the ingot is made from Welsh gold. It is also possible that this gold was transported from other regions, such as Ireland or south-west England. More information is needed on sourcing the origin of gold before we can say anything for certain.

The Ystradowen gold ingot is currently held at Amgueddfa Cymru – National Museum Wales and more information about their gold collections can be accessed here.