Huge chains strike the eye with a comic book grandeur. Yet this is no comic or Pop Art painting but an Archie Brennan tapestry from 1977 entitled Chains.

Archie Brennan was a bodybuilder and a former Mr Scotland. 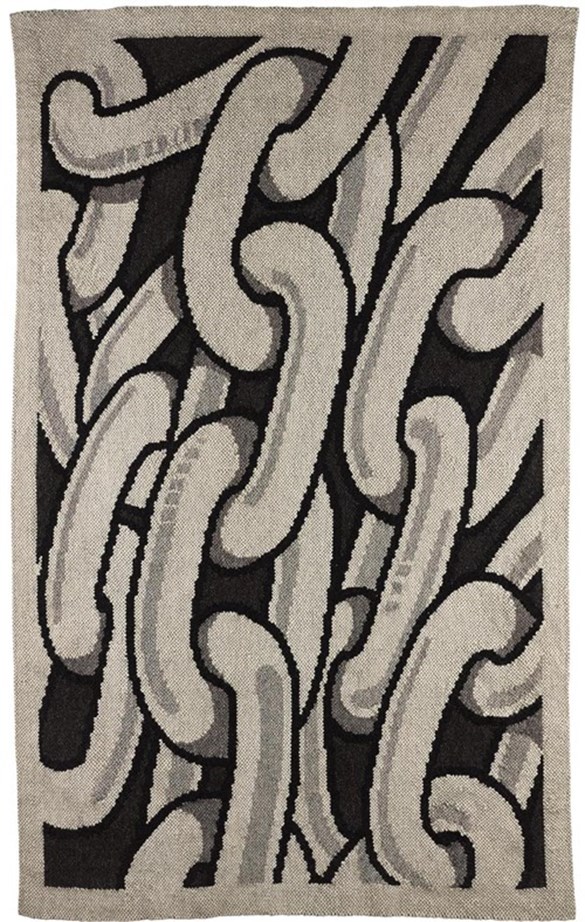 The design for Chains is based on photographs Brennan took of mooring chains piled in a yard at Leith docks. Brennan, struck by the sheer scale and simple majesty of the giant chains, using his photographs as models, developed a series of drawings on the theme which culminated in a large-scale drawing. It was from this drawing that the Dovecot Studios (or the Edinburgh Tapestry Company as it was then known) made their working cartoons, the design the weavers look at while weaving the tapestry.

How is the tapestry made?

Throughout his career Brennan was fascinated by the process and technique of making tapestry. Here, the links of the chains of the design are ‘woven’ together just as the weft threads of the tapestry form chains around the warp to create the design. Chains is a tapestry about tapestry making itself and Brennan took this further by using a special technique. By using a relatively fine grey warp with crude weft threads which do not completely cover the warp, the chain-like nature of the structure of the tapestry is accentuated. 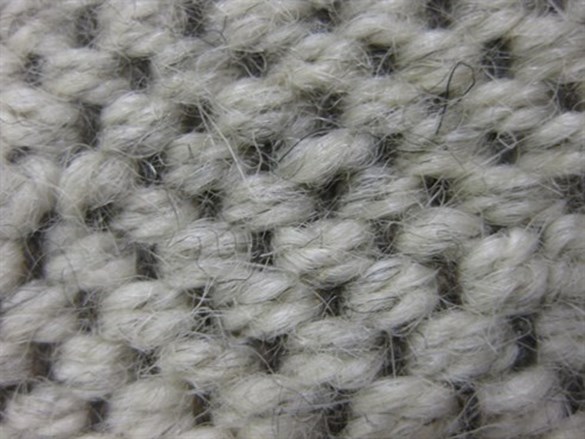 This technique also creates an unusual texture and tonal dimension where the textile is more like a coarse and floppy plain weave fabric – like a cheap hessian – than a conventional tapestry. The cream, brown, and grey colours through which the grey warp shows create an overall effect of dirty off-white, with the grey warp acting like oil on the chains. Sometimes Brennan used blisteringly bright colours in his work but some of his most thoughtful and conceptual pieces, including the giant crucifix Cruciform I(1966) in St. John’s Kirk in Perth, ply a tonality of mauves, browns and natural wool, where texture and design rather than colour are the most important considerations.

What was the inspiration behind Chains?

In the 1960s and 1970s, Leith had a busy dock and a shipbuilding yard, and the initial inspiration for Chains came from observing ship’s mooring chains at the docks. 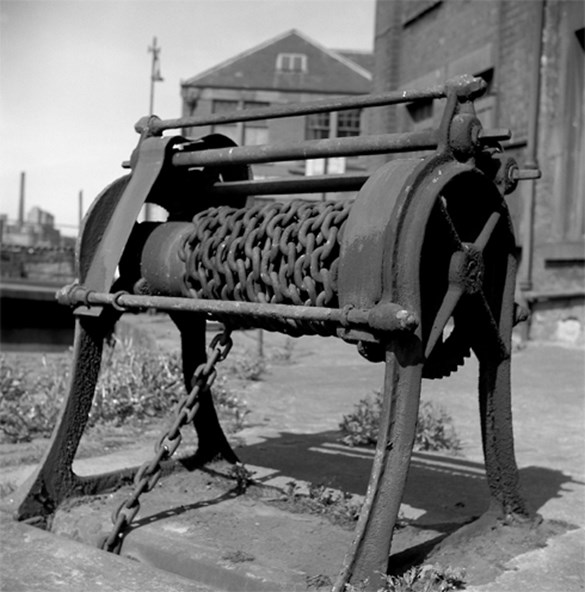 Further inspiration came from observing the process of winding cotton yarn at Eskmills near Musselburgh. This yarn, known as Seine twine, was used for making the fishing nets for which Eskmills was famous, but in the 1960s Brennan introduced it as warp threads in Dovecot tapestry. On one hand it was a practical and good quality warp thread but on the other it showed Brennan’s interest in the manufactured and the industrial in contrast with the delicate and luxury craft of tapestry. Brennan’s idea of using Seine twine for tapestry warp threads has now been adopted by tapestry makers all over the world.

As an artist and as a weaver Brennan is difficult to categorise. He worked with abstraction, with figures, with text and image, and could equally be called a modernist or a post-modernist. But Brennan had an undeniable Pop Art instinct and along with his friend Eduardo Paolozzi should be considered one of the greatest Pop artists Scotland has produced.

Chains is one of Brennan’s most iconic images, a key work of Scottish Pop Art, and it was woven several times. Chains I was woven in 1974-75 and acquired by the Victoria and Albert Museum in 1979. Our version, Chains II, was woven in 1977 and entered the National Museums Scotland collection in 1991 along with other Brennan tapestries including Mohammed Ali andBurn, as part of a transfer from the Scottish Development Agency (now Scottish Enterprise). 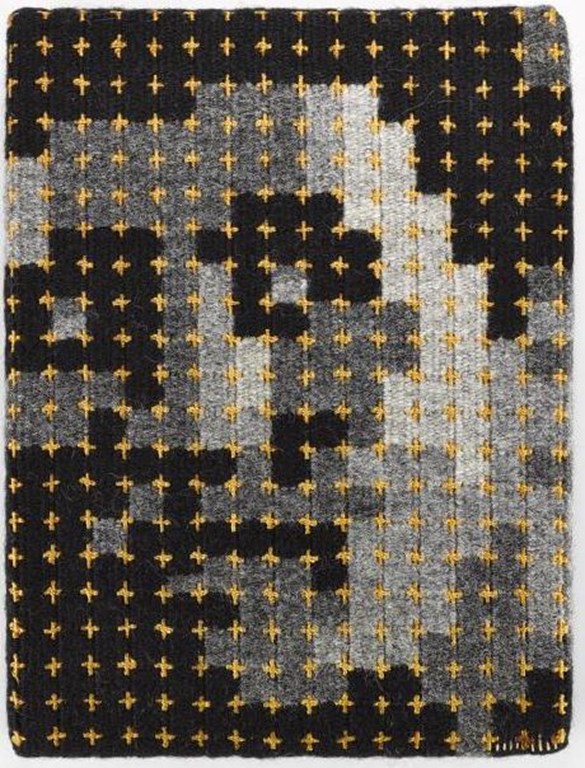 Above: Archie Brennan's Mohammed Ali, also in the collection of National Museums Scotland. 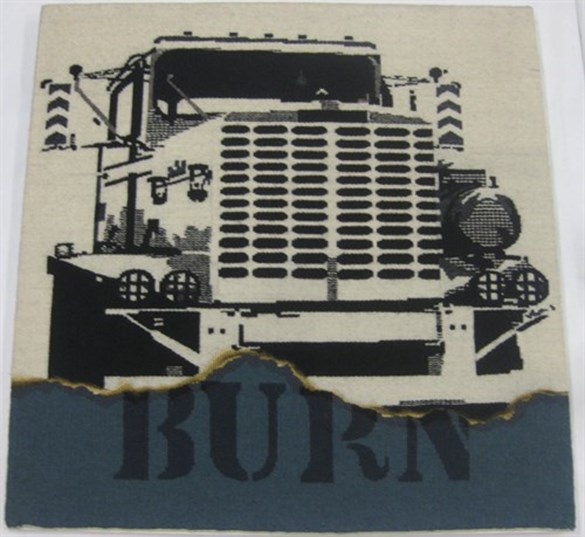 Above: Burn by Archie Brennan, also in the National Museums Scotland collection.

Although a great weaver in his own right, in the 1970s Brennan did not always feel the need to weave his own work and Chains II was woven by two Dovecot weavers Jean Taylor and Dot Callander, who had initially trained in tapestry weaving under Brennan at Edinburgh College of Art. The weavers not only followed Brennan’s cartoon, but Brennan wove samples as testers for texture and colour and as a guide for the weaving technique – especially important for Chains, with its unusual structure. Brennan’s original sample for Chains is still at the Dovecot Studios, now located in Infirmary Street Edinburgh. 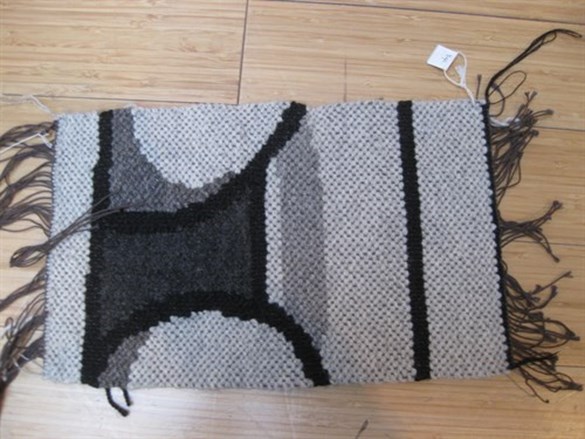 Above: The workshop sample for Chains, held at Dovecot Studios.

Who was Archie Brennan?

Archie Brennan was born near Edinburgh in 1931 and served an apprenticeship as a weaver at the Dovecot Studios between 1947 and 1953. After National Service he went to Edinburgh College of Art from 1956 to 1962 and from 1962 to 1977 was director of the Dovecot Studios. From 1962-1973 he was head of the tapestry department at Edinburgh College of Art, and in 1977 was elected Chairman of the British Arts Council and President of the Scottish Society of Artists.

After nearly thirty years of protean work at Dovecot and Edinburgh College of Art, Brennan moved to Australia, New Guinea, Hawaii and finally settled in New York where he lived with his partner the weaver Susan Maffei. Archie Brennan died in 2019.