This extravagant, highly impractical gown would have been worn at royal occasions. Putting it on and moving in it took skill and practice!

The skirt is nearly 2.5m wide.

For court wear in the early 18th century, women wore the open-fronted mantua, with a train and matching petticoat. To give the figure the required shape, stays (an 18th century precursor to the corset) and hooped petticoat, or panniers, were worn underneath. Designed to reflect the wearer’s status, mantuas were typically decorated with opulent embroidery incorporating gold or silver thread or gilt lace. 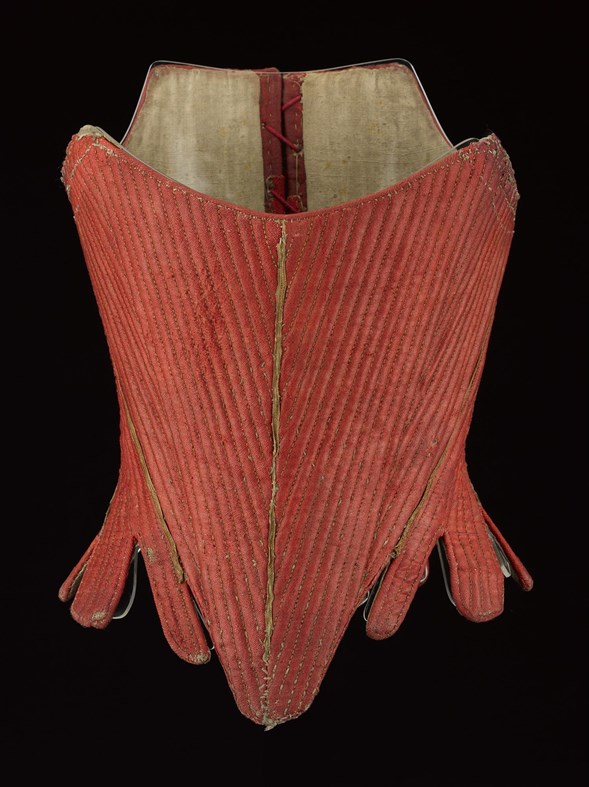 Above: Woman's stays made from linen and stiffening. Lengths of cane have been sewn into the interior with rows of vertical stitches. The reverse of the stays can be adjusted with a length of linen interlaced through eyelets at the centre back opening. English, c. 1730-50.

What was the inspiration behind the design of the mantua?

The mantua was worn only on specific royal occasions, such as receptions at Hampton Court and St James’s Palace in London. The King’s birthday was one of the man celebratory events of the year, when the nobility would gather in London and commission new clothes. It’s possible that the mantua was made for one of George II’s birthdays (10th November) as gold brocade fabrics were usual for this event: the firm of William Sharp in 1752 advertised a ‘great variety of gold and silver brocade for ladies, and rich waistcoat stuff for gentleman’s wear, entirely new, for the ensuing birthday and winter wear’.

The wide skirts of the mantua reflect the contemporary fashion, but their extreme exaggeration is purely a court affectation. In Britain the shape remained largely the same for many years, with only minimal changes in the formation of the train, or the fashionable pattern of the silk. 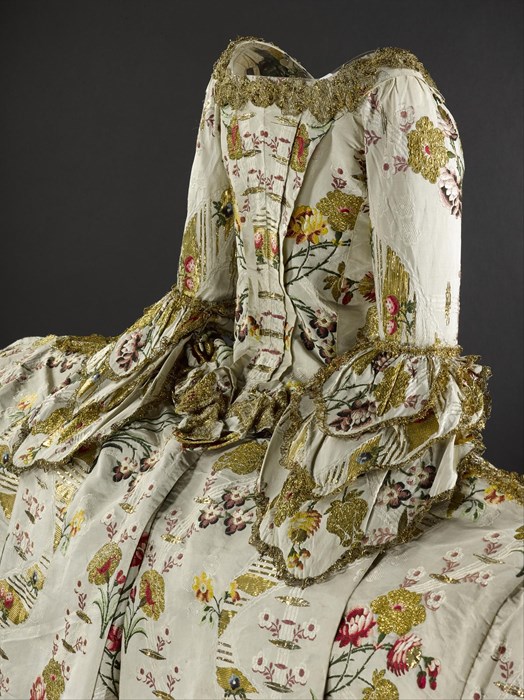 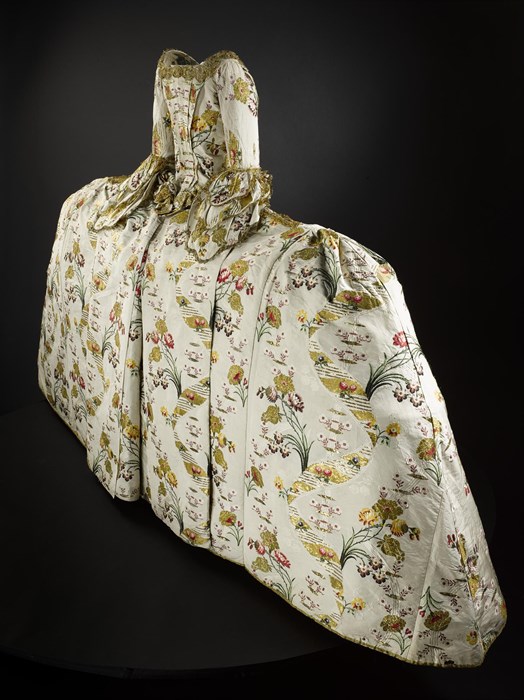 Why is the mantua special?

It is rare for mantuas to survive in such excellent condition and the museum is particularly lucky to know the family this belonged to.

The skirts of the mantua were used to show off luxurious fabrics that reflected a wearer’s wealth, taste and status. The use of gold, silver and silk, as well as the technical skill required to weave such complex patterns made these fabrics very expensive. Although we cannot know the exact cost, it is probable that the fabric of this dress would cost around the equivalent of £5,000 today.

How was the mantua worn?

It was a skilled practice to wear a mantua, from putting it on to learning to walk and dance in it. There were many layers underneath including stockings, held with a garter, a linen or cotton shift and stays, which fastened at the back. The hooped petticoat would have been arranged on the floor with the outer skirts over it for the lady to step into; both were then pulled up and tied at the waist. Small hip pads, or panniers, may also have been added at the waist to support the width of the skirt. The bodice and the stomacher – the triangular insert of fabric which sits in the open front of the garment – was arranged and pinned or sewn to the stays at the front. Finally, it was accessorized with the finest European lace and jewels. The process required the assistance of a lady’s maid, who would have been expected to attend their mistress for any change of clothes. 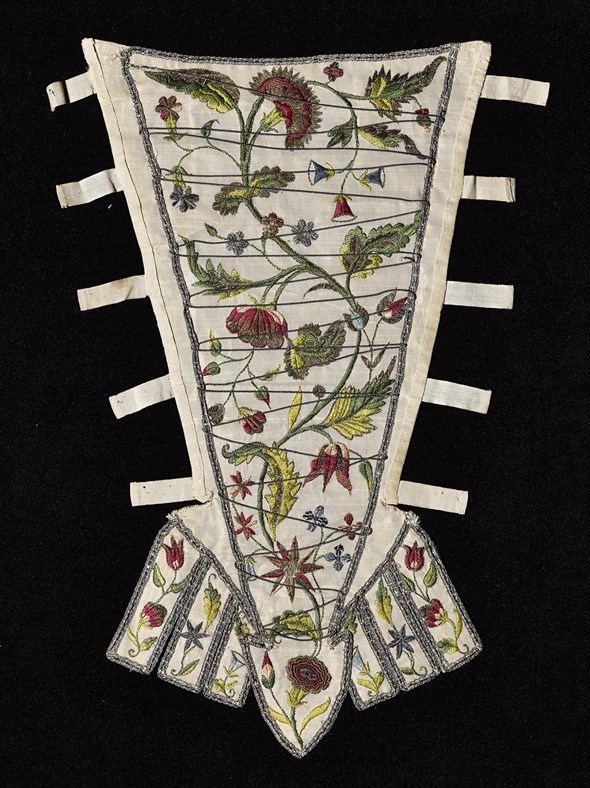 Above: This silk stomacher is a rare survival from the early 18th century (c1730-1750). It is backed with linen and embroidered with naturalistic floral design in coloured silks and silver-gilt thread.

The layers of clothing were heavy and cumbersome and women had to take the time and trouble to practice the decorum of wearing the court mantua. In the novel Belinda, written in 1801, Lady Delacour laughs at the absurdity of the situation:

“
Every body wears hoops, but how few - 'tis a melancholy consideration! - how very few can manage them. There's my friend lady C----- in an elegant undress; she passes for very genteel, but put her in a hoop and she looks as pitiable a figure - as much a prisoner - and as little able to walk as a child in a go-cart.
- Lady Delacour, Belinda, 1801

How was the mantua prepared for display?

The mantua underwent over 100 hours of conservation treatment, which included surface-cleaning the garment, humidifying creases, supporting weak joins and areas of loss and reattaching loose gilt threads. You can read more about the painstaking conservation process in this blog post. 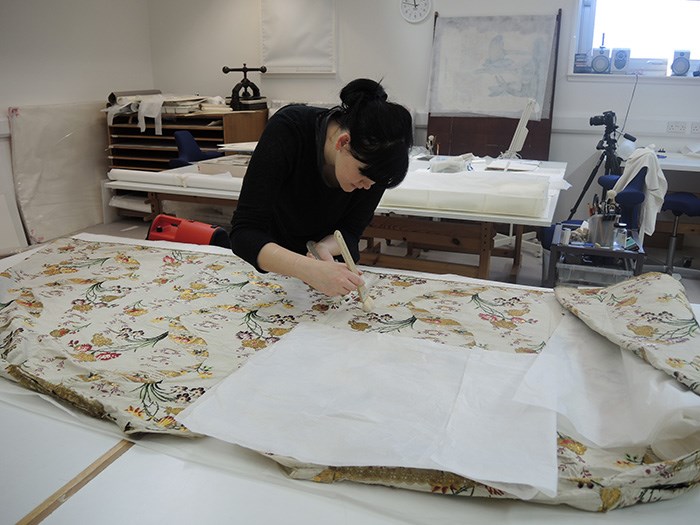 Above: Conservator Danielle Connolly cleaning the surface of the dress.

Mounting historic garments for display reveals much about the body shape of the original wearer. The fashionable shape of the torso at this time was much more conical with a flatter, smoother bust line, fashioned by the rigid stays worn by ladies in the 18th century. 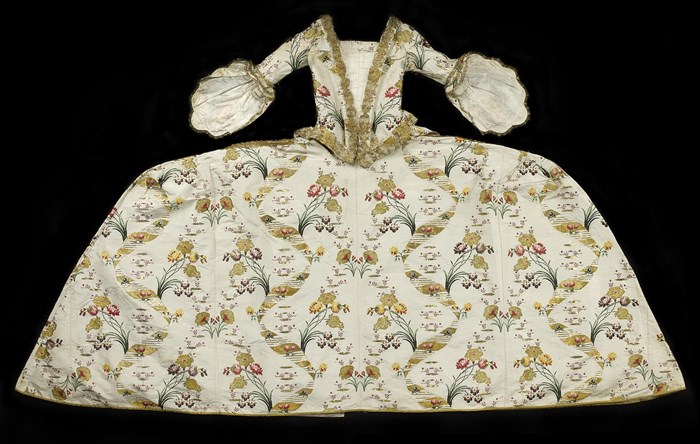 Above: The court mantua before it was mounted for display.

To support the mantua on display and to achieve the fashionable silhouette of the 1750s, our costume mounting specialist made a replica hooped petticoat. This in turn is supported by an acrylic structure made for us by The Museum Workshop at the same time as the bespoke acrylic mannequin. The costume mounter also had to make padded arms, which are stitched onto the acrylic torso, and a replica stomacher, as stomachers original to 18th century open-fronted dresses rarely survive. You can see the process in action here: