England – the vase was probably made in Shropshire and decorated in London.

The vase is one of a set of four. The other three vases can be seen at the National Museum of Wales, The Higgins Art Gallery & Museum, Bedford, and the V&A.

The art and design of Britain during the second half of the 19th century was one of revivals and reimagining, with artists drawing inspiration from all manner of historical and global sources including Ancient Greece, Rome and Egypt, also Japan, China, Tudor England, the Middle East, the 18th century, the Italian Renaissance and, perhaps most crucially, the Gothic architecture and design of the Middle Ages. 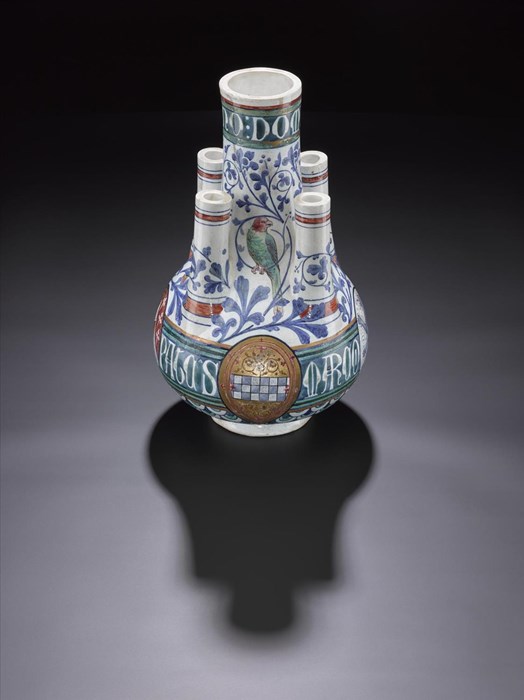 Who was William Burges?

The architect and designer William Burges (1821-81) was one of the greatest exponents of this eclecticism, and is regarded as the most innovative of all the designers working in the 19th century Gothic Revival style. His work, as exemplified by the vase, drew on a great range of sources, including the arts of the Middle Ages, the Islamic world and East Asia. 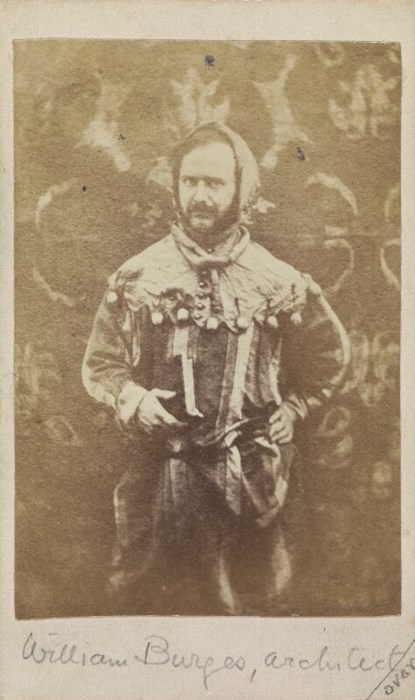 This vase, one of a set of four, was created in 1874 as an integral part of the interior decoration of Cardiff Castle, one of the most important, and opulent, architectural and decorative commissions of the 19th century in Britain. It is made of stoneware and decorated with paint and gilding, and was most probably made in Shropshire and decorated in London.

The commission to rebuild Cardiff Castle for John Patrick-Crichton-Stuart, 3rd Marquess of Bute (1847-1900), provided Burges with an extraordinary opportunity to realise his ideas and vision on a grand scale. Bute was probably the richest man in Britain at the time, and he shared Burges's somewhat romanticised love of the Middle Ages. The exterior architecture was inspired by French medieval castles, and the interiors are covered with elaborate, vividly coloured carvings, panelled walls and painted ceilings. The furnishings were equally inventive and extravagant, drawing on a range of craft and manufacturing techniques, including carving and tapestry weaving.

This vase was one of four designed to be placed on stone brackets in the corners of the Summer Smoking Room, a galleried interior at the top of the dominant Clock Tower of the Castle. 'Designs for the Decoration of the Winter and Summer Smoking-rooms at Cardiff Castle' painted for Burges by the artist Axel Haig, were exhibited at the Royal Academy in 1870 and show the vases included in the proposed scheme. 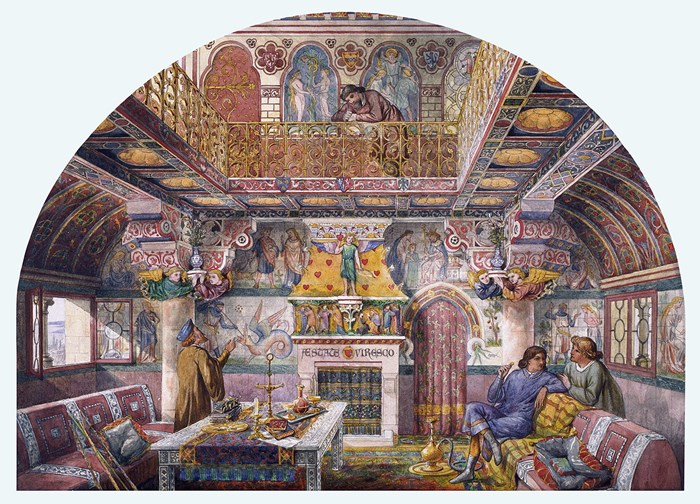 Above: Axel Haig, Design for the Summer Smoking Room at Cardiff Castle, circa 1870 © National Museum of Wales.

Having completed the main interiors of the Castle, Burges inscribed Lord Bute’s name and the date onto wood or marble. For the Summer Smoking Room, Burges had his patron’s name and the date inscribed around the vase: the inscription 'IOHNS PATCS. MARQ. DE BUTE' runs around the body, where it is embellished with Bute’s armorial bearings, and 'ANNO DOMINI 1874' is inscribed around the neck. The vase functions as a vivid symbol of the wealth and the important artistic patronage of the Bute family during the second half of the 19th century. 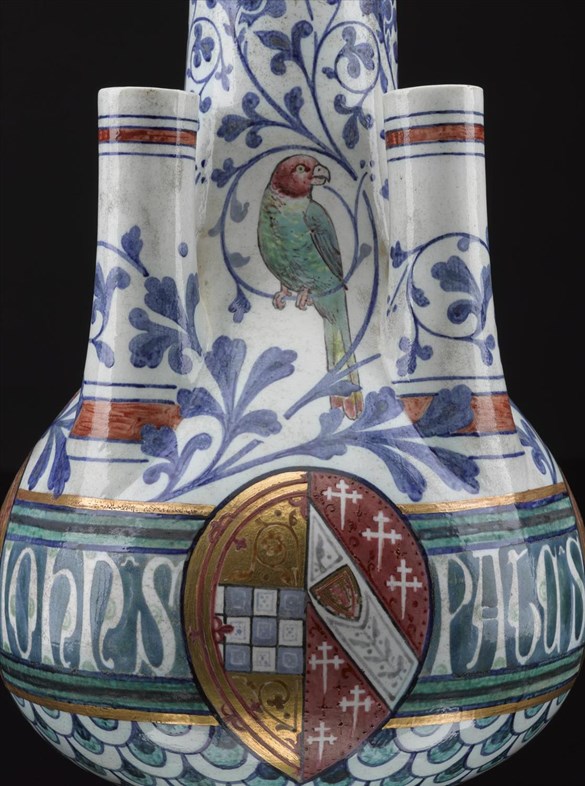 Above: Detail of the vase showing Bute's armorial bearings.

This vase also illustrates Burges’s great range and skill as a designer, particularly the eclecticism that characterised his style. The shape of the vase relates very closely to European, Middle-Eastern and Chinese examples of multi-necked vases, and a drawing of a glass rosewater vase of comparable form appears in one of Burges's sketchbooks.  The bright polychrome and gilded decoration draws on European maiolica, Turkish fritware and medieval manuscripts. The blue, green gold and ochre colours used in the decoration reflect the Summer Smoking Room interior, and the love birds adorning this vase are also depicted throughout, including on the hood of the chimneypiece. 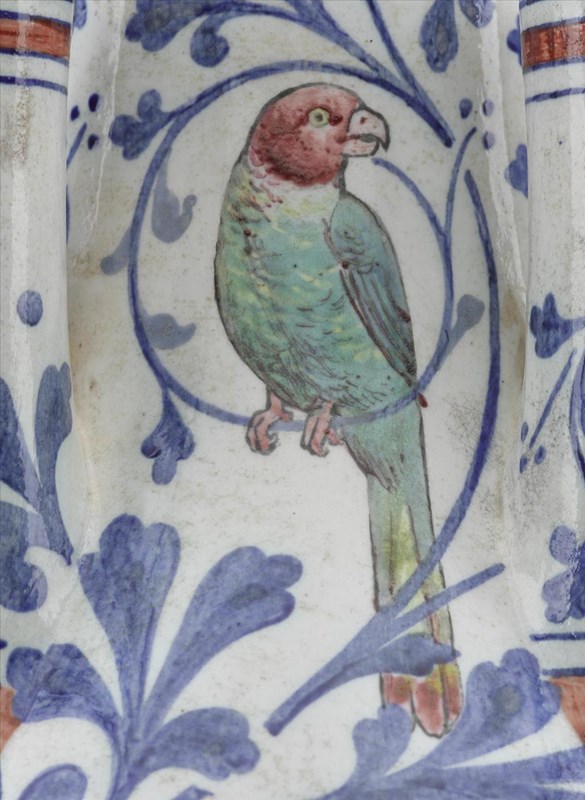 Above: Detail of love bird on the Burges vase.

The four vases designed for the Summer Smoking Room are the only known works by Burges which are made wholly of ceramic and without the collaboration with a metalworker. Normally, Burges repurposed existing ceramics from his own collection by having them mounted silver and other materials. The material, shape and decoration of the Summer Smoking Room vases were all part of Burges’s vision of a harmonious and elaborate scheme that would evoke the glories of the Medieval world.

Acquired with the generous assistance of the National Heritage Memorial Fund.