The Meissen lion is part of the animal menagerie commissioned by Augustus II the Strong in the early 18th century.

The lion was part of a collection of nearly 600 animals commissioned by Augustus II the Strong in the early 18th century.

The Meissen lion was commissioned by Augustus II the Strong, King of Poland and Elector of Saxony (12 May 1670- 1 February 1733). It was made in the famous porcelain factory at Meissen for the Japanese Palace Augustus bought in Dresden in 1717 to house his extensive oriental collection. The lion is one of 296 mammals and 297 birds made of porcelain commissioned to occupy a large-upper floor gallery of the Japanese Palace. However, a much smaller number was actually completed due to a variety of problems. 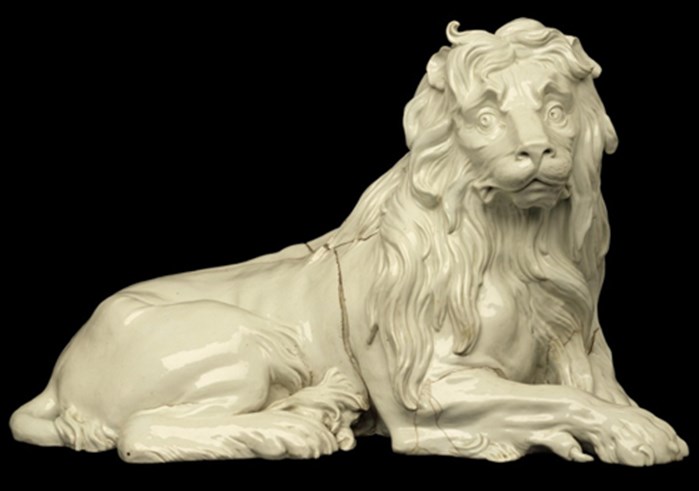 Above: Porcelain figure of a lion: German, Saxony, Meissen, from a model by Johann Gottlieb Kirchner, c. 1732-1735.

In addition, only a fraction of the porcelain produced was ever paid for, which placed the Meissen factory in a precarious financial position. The Meissen artists and craftsmen however were pleased to be experimenting with new porcelain techniques.

In the porcelain production process, a plaster mould was created from a large model, usually made from clay, but with the large porcelain animals this led to problems. The model had to be made bigger than the size intended for the finished figure as, once fired, the porcelain would shrink by up to a sixth of its original size.

Once the plaster mould had been created, a special porcelain paste would be pressed into each of two separate halves. The porcelain paste was then removed from the mould and joined together to create a complete figure. Once the figures had been assembled and given their finishing touches, they were left out in the air to dry out completely and then given a low firing and glazed. The large animal figures were too big to be dipped into glaze so they were basted.

Additional problems sometimes occurred when the glaze was fired, causing discolouration and cracking. The large animals also had to be hollow, as solid ones would not have survived the firing. In order to make the figures stable, experiments were carried out using various designs and support constructs. The whole production process could take weeks to complete. 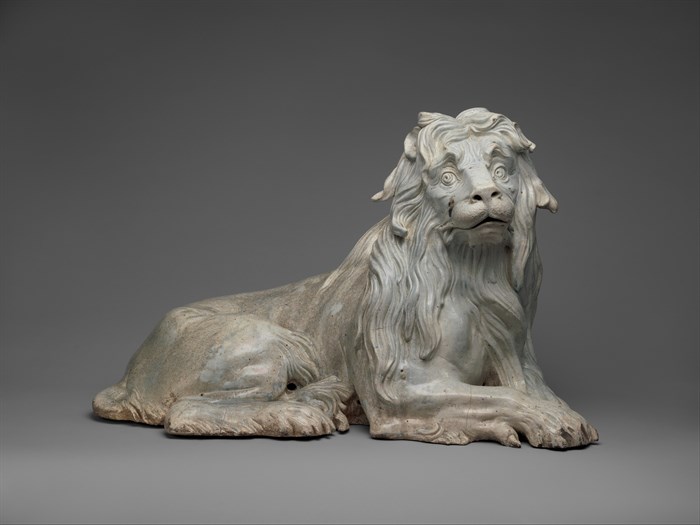 The first sculptor permanently engaged by Meissen was Johann Gottlieb Kirchner. From 1727, he began to familiarise himself in depth with the technical procedures and difficulties inherent in porcelain production. Kirchener was joined by an assistant Johann Joachim Kaendler in 1731 and Kaendler took over as chief modeller in 1733 as Kirchener resigned. It's not clear if Kirchner or Kaendler were responsible for the animal moulds but it's likely they both worked on the large animal moulds.

The lion in our collection is one of several surviving beasts from the menagerie. He is shown at rest, his tail carefully tucked between his hind legs and forepaws placed demurely together. The impressive moustachioed head has a melancholy, distinctly human, expression. The legs, tip of the tail and mane all have strands of hair and the jaws are closed with no teeth. The typical characteristics of a fierce lion are absent but it is typical of the Baroque approach of the time.

Today, there are five other known lions: three in the Dresden Porcelain collection, one at Longleat House, Wiltshire and another at the Metropolitan Museum of Art, New York. The lions and other large animals in the series are landmarks in the history of porcelain manufacture. Even the Chinese had never attempted figures of this size, as porcelain is an awkward medium on a large scale. Kirchener's finely modelled and elegant lions are certainly a remarkable achievement.