Why should a 19th century Scottish woman feature on a contemporary African cloth? Discover the story of Mary Slessor: missionary, magistrate and champion of women's rights.

The cloth is currently not on display.

Mary Slessor featured on the bank of a £10 bank note issued by the Clydesdale Bank in 1997 as part of the Famous Scots series.

Our African collection of textiles ranges from large, hand-woven, embroidered cotton and silk robes to finely woven raffia skirts dyed with natural pigments and printed patterned cotton cloths. They date from the late 18th century to the present and represent the wide range of clothing styles from across the continent.

We continue to add to our growing collection of contemporary African textiles with examples of the cloths printed with designs to celebrate, commemorate or promote an individual, event or anniversary. Known as commemorative or portrait cloth, these brightly-coloured fabrics are identified by the slogans incorporated in the design and many include a photograph or representation of an individual. These cloths are often commissioned by political parties and religious institutions and worn to demonstrate solidarity and affiliation by supporters and members. 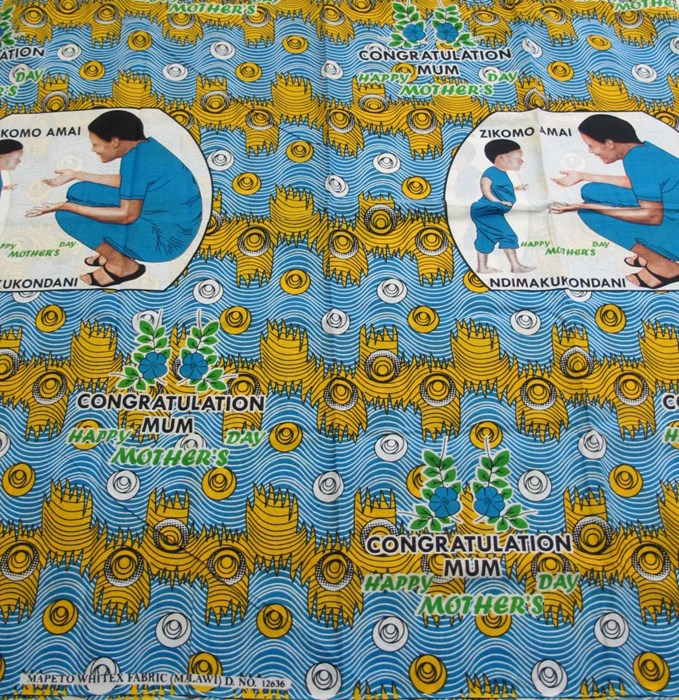 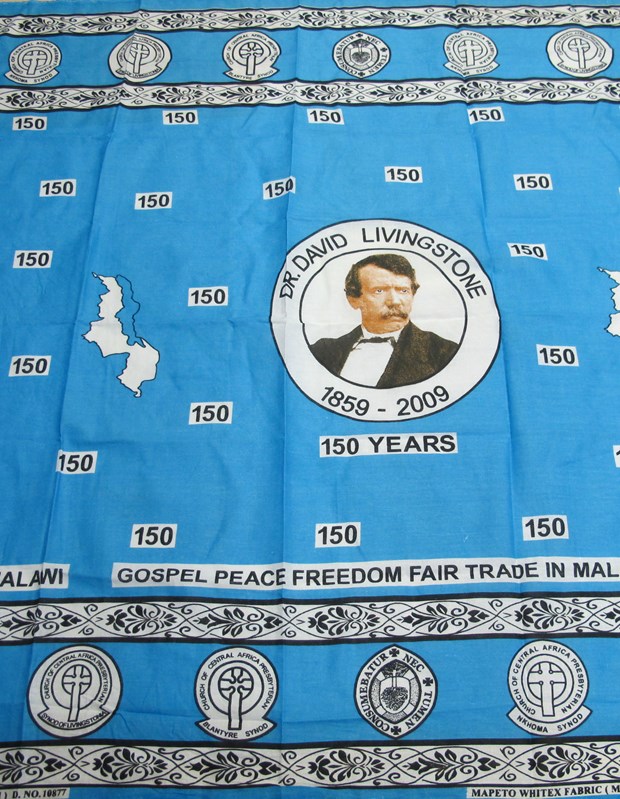 Above: Cotton cloth commissioned by the Church of Central Africa Presbyterian to commemorate 150 years since the arrival of Scottish missionary David Livingstone in Malawi: Africa, Southern Africa, Malawi, 2009.

This particular cloth was donated to National Museums Scotland in 2015. Produced by the Presbyterian Church of Nigeria to commemorate the Scottish missionary Mary Slessor, it is a cloth traditionally worn by women of the church on Mother’s Day, as a tribute to her memory. 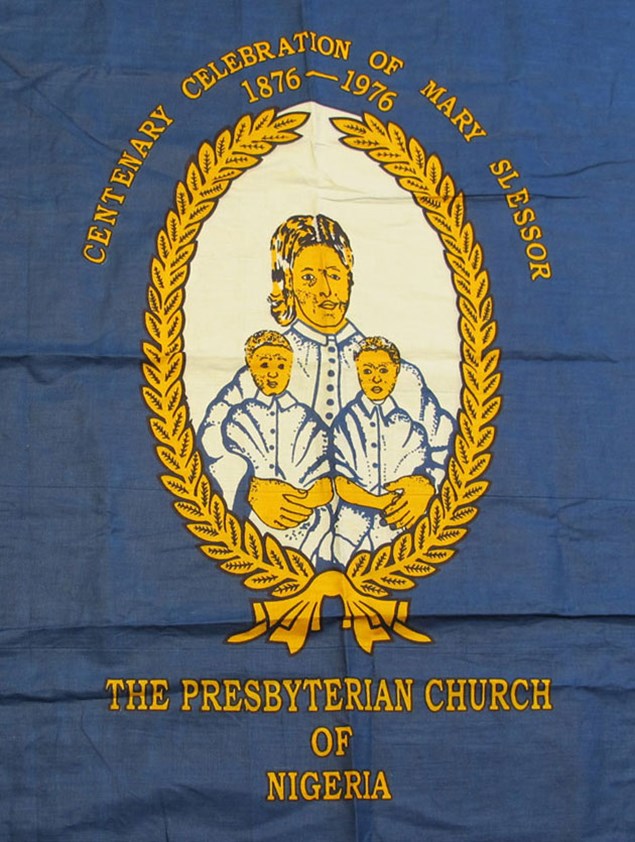 Above: Cotton cloth commissioned by the Presbyterian Church of Nigeria to commemorate the centenary of the arrival of Scottish missionary Mary Slessor in Calabar: Africa, West Africa, Nigeria, 1976. The figures represent Mary and the local twin children whose treatment and civil rights she worked to improve.

But who was Mary Slessor, and why should a 19th-century Scottish missionary feature on a contemporary African cloth?

Who was Mary Slessor?

Born in Aberdeen, Mary Slessor (1848-1915) moved to Dundee with her family in 1857. By the age of twelve she was working as a weaver and attending the factory evening school. At eighteen she was an active member of the United Presbyterian Church (UPC), working amongst the slums of Dundee. The UPC promoted their work abroad and this appealed to Mary, and in 1876, after missionary training in Edinburgh, she left Dundee for the Calabar Mission in West Africa. 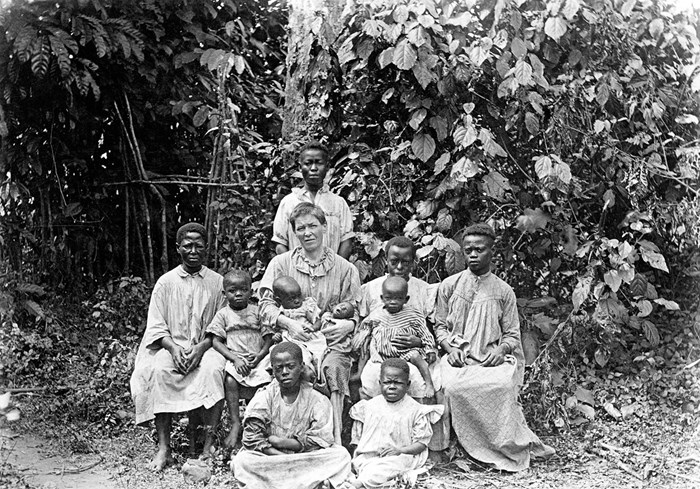 Mary was to remain working in the region for 39 years, until her death in 1915. Although resistance to single women missionaries by the church was strong at first, by the late 19th century, women outnumbered men in missions as wives, teachers, nurses and nuns. Whilst married women were not officially commissioned as missionaries, they were all expected to work where possible. Single women such as Mary had the same commitments as men, and mission journals printed news about them and the mission wives as a means of interesting the Christian public, especially fundraisers, in the wider mission work.

“
Okoyong and its people are very dear to me… Whether the Church permits it or not, I feel I must stay here, and even go on further, as the roads are made…
- Mary Slessor, 1906

There have been a number of biographies which detail the harsh life and difficult working environment in which Mary lived. After twelve years working at the established coastal mission stations, she travelled inland to the Cross River region, where she settled in Okoyong among the Efik people. She was particularly interested in improving conditions and rights for local women and children.

Mary is recognised among her other work for the impact she made on the change of attitude towards the treatment of twin births among the Efik. Here twin babies were abandoned or killed and mothers were ostracised, their birth believed to be the product of intervention by the devil and to have a negative impact on society. It is well documented that, although adoption of children was not generally approved by the mission, Mary adopted and cared for nine babies saved from such a fate, providing a safe home for them all. 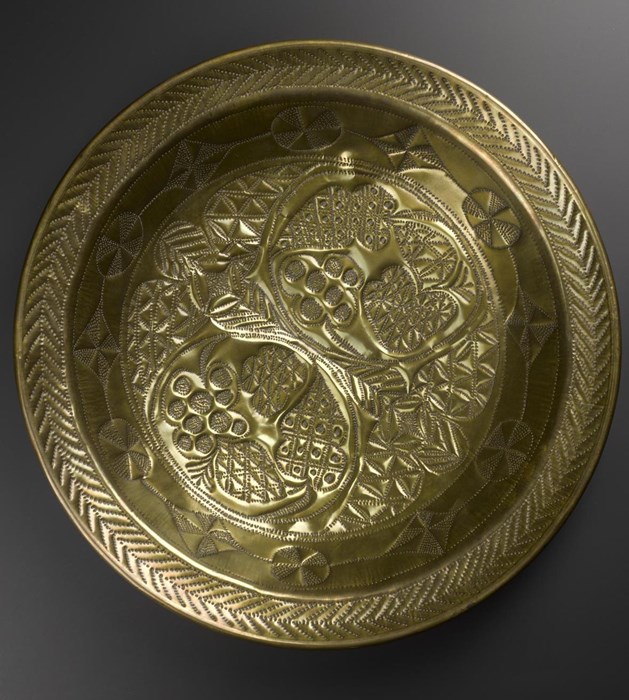 Above: Decorated tray made from imported brass currency bars by the Efik people in Calabar, Beaten and decorated trays were high-status goods used in local chiefly households. You can see this tray in a display about Mary Slessor's life in the Innovators gallery, on Level 5 of the National Museum of Scotland.

The complex associations linked to twins, both negative and positive, are common in many African countries, and the museum’s collections include a number of figurative carvings which represent twins. These include carvings originating from the Yoruba, neighbours of the Efik and Ibibio, among whom Mary worked. You can find out about these here. 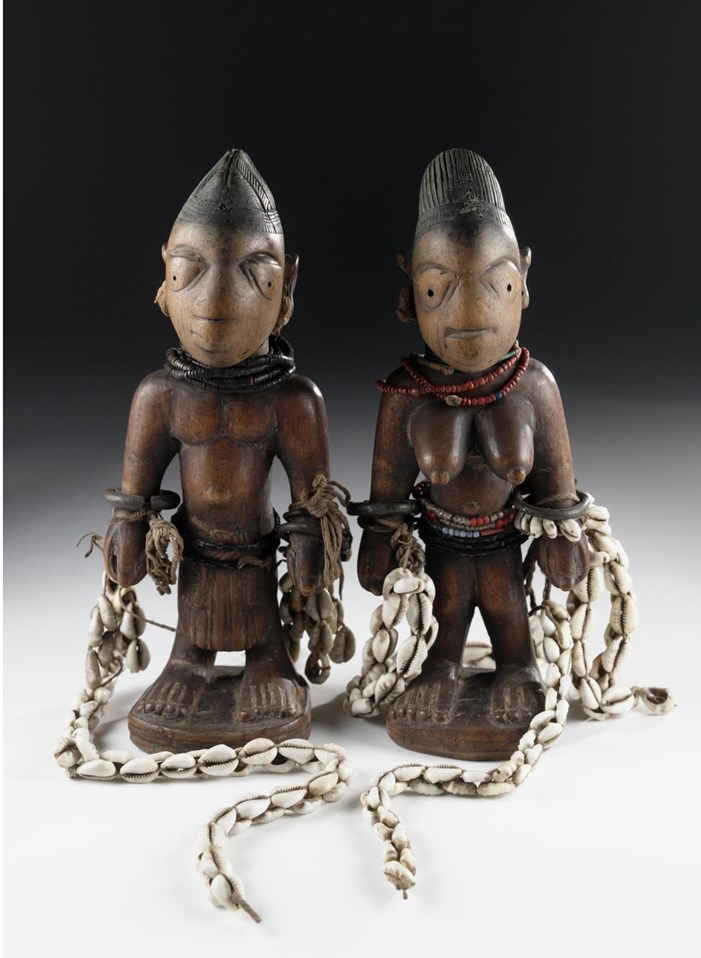 Mary died of malaria at the age of 67 and was buried in Duke Town, Calabar, with the equivalent of a state funeral. There are a number of prominent memorials to her life and work in Dundee and in Calabar. 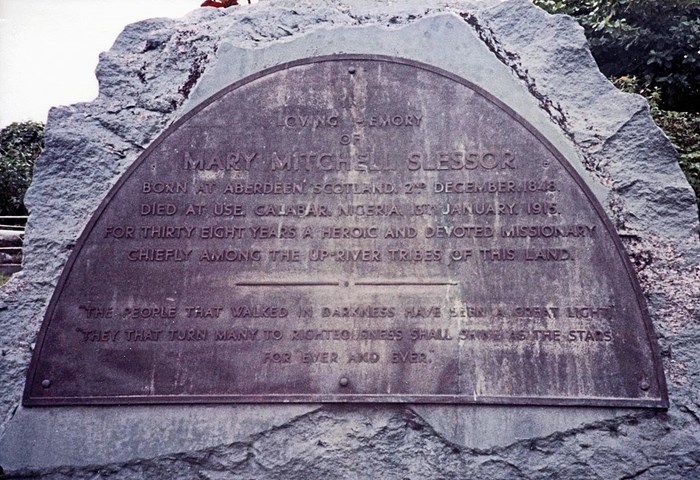 In 2015, National Museums Scotland took part in commemorations for the centenary of Mary’s death. Taking the lead in the programme of events was the Mary Slessor Foundation, a Scottish charity run from Dundee and based in Okoyong, Nigeria, which aims to continue her work in the region. The foundation generously donated the length of Mary Slessor cloth, originally commissioned in 1979 to celebrate the centenary of her birth, to the African textile collection. Mary is depicted in a familiar pose with a baby in each arm, as a symbol of motherhood, acknowledged for her pioneering work by generations of women in the Calabar region. 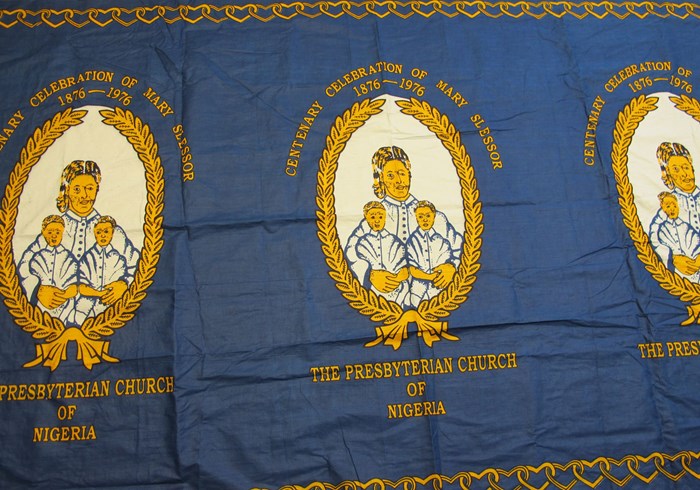 Worn on Mother’s Day, this cloth is also a celebration of the connection between Dundee and Calabar forged by this strong and determined woman over one hundred years ago.

You can find a display featuring Mary Slessor on Level 5 in the Scottish galleries at the National Museum of Scotland.