A slice of history preserved thanks to Scottish naturalist and conservationist John Muir.

Purchased in 1891 from Mackay and Chisholm

The closest living relative to the Araucarioxylon arizonicum is the Araucaria, or Monkey Puzzle tree.

A slice of history

During the Triassic period, over 200 million years ago, the landmass which is now Arizona was located in the Tropics, near the equator, and was densely forested. This beautiful, highly polished slice of fossilised wood comes from a tree called Araucarioxylon arizonicum, a conifer tree. Now extinct, these trees once grew over 60 metres high.

This beautiful, highly polished fossil originates from the Arizona Petrified Forest National Park in the USA. The park became a National Monument in 1906, thanks to the campaigning work of the Scottish-born naturalist John Muir, and a National Park in 1962.

Who was John Muir?

Did you know? Muir’s birthday, 21 April, is a California holiday. 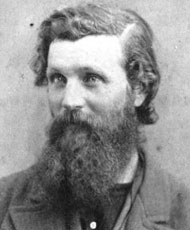 John Muir was born in Dunbar, East Lothian in 1838. When he was 11, his family emigrated to America, settling in Milwaukee, then still very much a frontier town. His father, Daniel Muir, was a stern and zealous preacher, and John was raised on daily Bible study, forbidden to read anything without practical or religious merit. But this didn’t stop him avidly consuming any written material he could lay hands on, and in 1861 he was admitted to the recently founded University of Wisconsin.

Here he was introduced to science, and to the value-centred views of nature in the writings of William Wordsworth, Ralph Waldo Emerson and Henry David Thoreau, which would shape his passionate love of nature for life.

From 1869-1873, Muir settled in the scenically stunning Yosemite valley, which he explored thoroughly on foot. Finding everywhere traces of the huge but now vanished glaciers that he believed had carved the valley from granite, Muir began to disseminate his geological views, which directly contradicted previously existing theories about the formation of the area.

Geologist and botanist, author and diarist, mountaineer and explorer, Muir was also a groundbreaking conservationist, whose work has inspired and informed the modern ecological movement. As a result of his tireless campaigning, Yosemite, Sequoia, Kings Canyon, Mount Rainier, Grand Canyon and Petrified Forest were eventually established, and the idea of national parks spread worldwide. Thanks to Muir, these rich, wild landscapes have been preserved for future generations.

Where is the fossil displayed?

The tree fossil is on display in the Discoveries gallery, as part of a celebration of the life of John Muir. This fossil was collected before the Petrified Forest became a national park. Fossil collecting is now illegal on federal land, and thieves face a fine and possible imprisonment.