With its slick design and sensational selection of records, this jukebox for the future may look like an all-American classic but it was designed in France and manufactured in the UK. Let’s rock this joint!

The Chantal Meteor was named after designer Foufounais’ wife.

One for the money: the history of the jukebox

The word 'juke' is an African-American word derived from the West African word 'Dzug'. It was used to describe a person or a place that was 'bad, wicked and disorderly' and was applied to 'Juke Joints' popular in  the 1920s and '30s in the Southern US states – particularly in rural areas – that served cheap drink and food and provided music for dancing. They were often portrayed as ramshackle and rowdy places.

Although coin-operated music boxes and phonographs had been produced since the 1890s, the use of electrical amplification from the 1920s meant the volume of the machine was at a suitable level to be considered public entertainment. The jukeboxes of this era used classic Art Deco styling, reflecting the dominant design aesthetic of the time with clean lines, angular shaping and electric lighting featuring heavily on the machines.

It was not until the mid-1940s that the jukebox became more popular in the UK. The influence of American popular culture – partly spread by GIs who had been stationed in the UK during the Second World War – had a great effect on the uptake and popularity of the jukebox. As in the US, the reputation of the jukebox and its associations with rowdy and undesirable meeting places meant that manufacturers had to work to market the jukebox as a respectable addition to any establishment.

This can be seen in the artwork of Albert Dorne, who provided the illustrations for Wurlitzer advertisements in the mid-1940s. He created an image of the jukebox at the centre of white, middle class, American cultural life, depicting elegant people in elegant settings enjoying the sounds from the jukebox, despite the fact that it was teenage and black audiences using the jukebox most frequently. 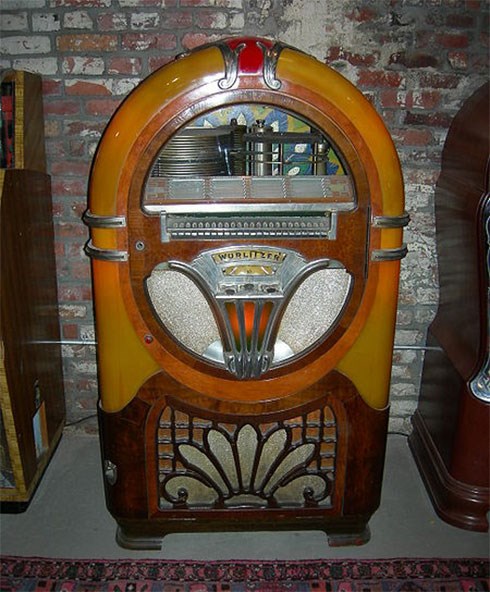 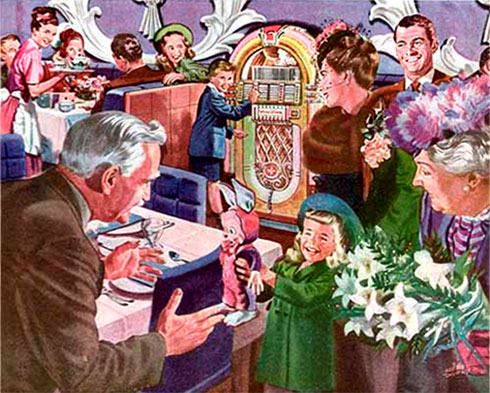 Above: 1947 illustration for Wurlitzer by Albert Dorne. Image courtesy of the American Art Archives.

In the 1950s and 60s, newer models offering a greater selection of discs were launched, featuring design elements drawn from US automotive design and reflecting the ‘Atomic Age’. It’s from this era that our jukebox belongs and, as this advertisement for the Chantal Meteor 200 shows, it was marketed as a machine for the future. 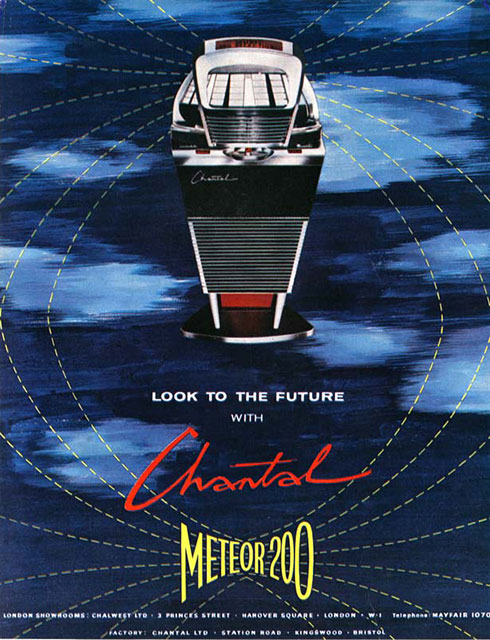 Above: Advertisement for the Chantal Meteor 200. Image by Tony Holmes.

Two for the show: the launch of the Chantal Meteor 200 Jukebox

This is not the end of the Chantal Meteor story as in 1959, David Fry – owner of the Bristol manufacturing firm Frenchay Products – had begun production of a British version of the jukebox under the licence name ‘Chantal Ltd’. It is in this factory that our jukebox was made. In the initial month of manufacture, 75 machines were produced, which increased to 100 per month until 1962.

Such was the significance of a British firm entering the US-dominated market of jukebox manufacture it was reported in a 1959 edition of the US Music Business magazine Billboard under the headline: “Chantal Jukebox Completely Manufactured in Great Britain”, referring to the fact it was “believed to be the only such machine completely manufactured – down to the last nut, bolt and washer – in large quantities in Britain.”

In terms of commercial distribution, it was estimated that 100 machines were operating in the London area, with jukebox distributors Chalwest Ltd concentrating on promoting the Chantal in the Home Counties, moving further afield over the coming months. They were originally sold for around £595 but our model was purchased in 1976 at Sotheby’s auction Rooms for a mere £176 – what a bargain! 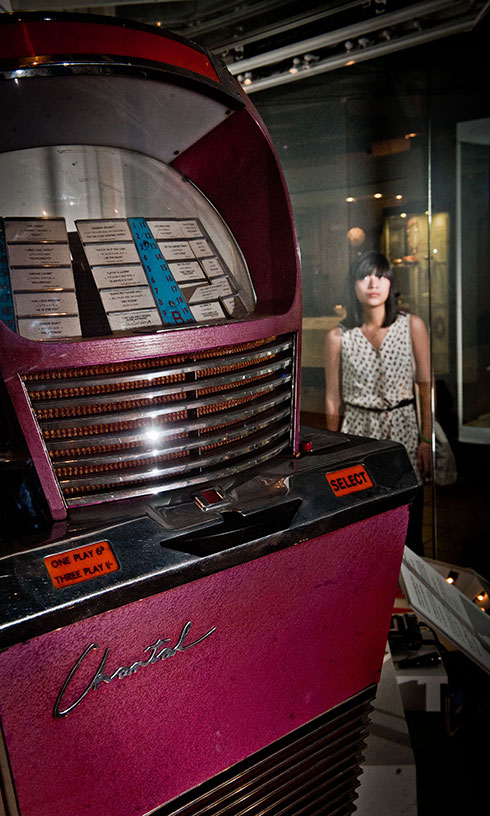 An advertisement in our collection promotes the simple mechanical construction of the Chantal Meteor which “leaves patrons fascinated by the ingenious mechanism” – an aspect of the machine which had also been an attraction to audiences of the music boxes of the late 19th century. 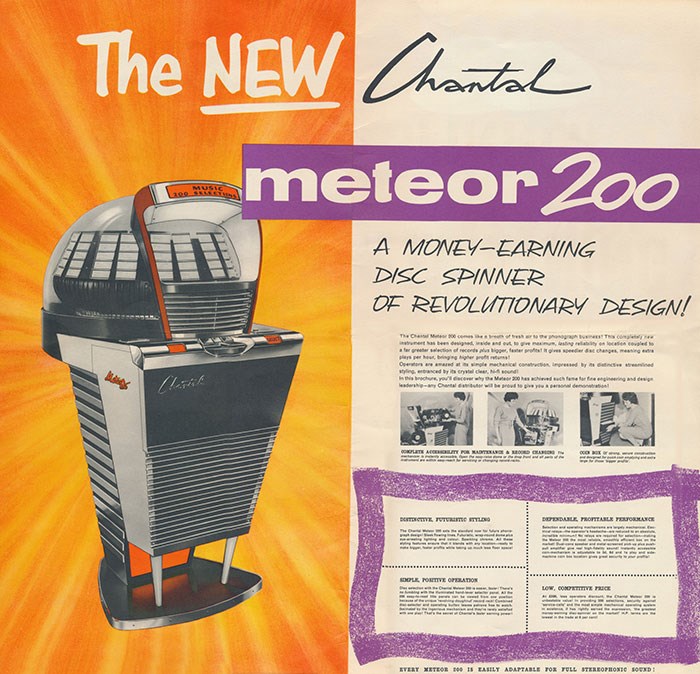 Above: Advertisement for the 'money-earning disc spinner' Chantal Meteor 200.

However, the revolutionary design of the perspex dome, simple construction and ease of access to the discs did have some negative effects on the machine’s money-spinning potential, as customers discovered that by burning a hole in the dome with a cigarette and then poking a knitting needle through to nudge the discs, they were able to get free plays! Thankfully our Chantal never suffered this fate and the dome is intact!

You can see the Chantal in action here:

Three to get ready: jukeboxes in the UK

Writing in Billboard magazine in 1960, Aaron Sternfield sent a report from London detailing the use and popularity of jukeboxes in the UK. He estimated there to be 20,000 in operation in pubs, private clubs and restaurants across the country. Many of these were still the old 16 selection (8 discs) models that played 78rpm discs, but 200 selection machines using 45rpm 7” discs – such as the Chantal Meteor 200 – were becoming increasingly popular.

Even in this period it was noted that:

“
The big problem has been to give the jukebox an aura of respectability. The British for some obscure reason have always tended to wrinkle their noses at the jukebox.

Aaron also noted that young people in the UK had more disposable income than their American counterparts and were willing to spend it on enjoying themselves. As they were the dominant customer base, they influenced the choice of discs going into the jukeboxes with the emphasis on rock ‘n’ roll, especially from UK artists who produced copies of songs originally performed by American artists.

The discs that are currently resting in our machine were selected by our former Curator of Audio and Television, Alan Mills. He selected discs dating from the 1950s through to the 1960s. 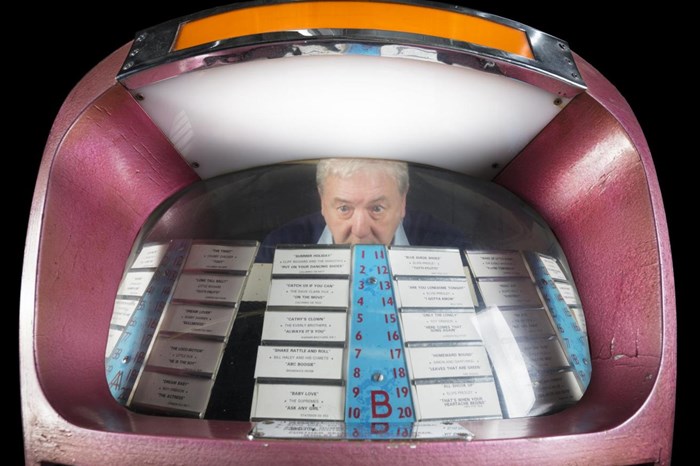 Above: Curator Alan Mills selects a track on the Chantal Meteor jukebox.

From this selection, Julie Orford, Assistant Curator of Science, has put together a playlist for your listening (and dancing!) pleasure, featuring songs from the 1950s to the early 1960s, to cover the period of manufacture for our jukebox.

Here’s what Julie would choose if the Chantal Meteor were fired up again: