The Comet made the first commercial journey by a jet aircraft on 2 May 1952.

The last civil Comet to fly was our Comet 4C, G-BDIX  on her journey to East Fortune in September 1981.

Aeroplanes became faster when engineers developed the jet engine. Fuel and air, forced through a nozzle at high pressure, forms a thin stream or jet; when this burns, it creates enormous energy – the 'thrust' needed to travel at great speed.

A jet engine can either generate 'thrust' by pushing greatly expanded air/burnt fuel mix out at the rear, or driving a turbine to turn propellers on the aircrafts wings, which propel the aeroplane forward; or it can turn huge fans which suck air through engines to create 'thrust'.

The Comet was the world's first passenger jet, a much faster aircraft powered by a jet engine. It made its debut in 1952. One year later, however, a Comet broke apart after taking off from Calcutta airport. Two more crashes followed before engineers traced the problem: metal fatigue spreading from the window frames.

The Comet's designers, the de Havilland Aircraft Company, re-designed the entire aircraft and the Comet 4 series appeared in 1958. They were now fitted with four mighty Rolls Royce turbojet engines; just one of the these generated a massive 10,500 lbs of power. 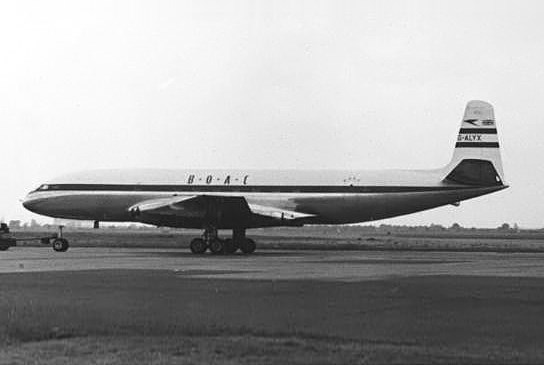 The Comet's first maiden flight was on 2 May 1952, from London Heathrow to Johannesburg, South Africa and it was also the first commercial journey by a jet aircraft.

She stopped off en-route in Rome, Beirut, Khartoum, Entebbe and Livingstone. The next day 20,000 people gathered at Palmietfontein Airport to welcome the aeroplane.

“
The principle of jet propulsion was the outcome of British enterprise and British ingenuity...forged in the fires of war, today it starts making its contribution to peace and prosperity. I am extremely proud that we had the honour of introducing this remarkable new form of travel to the world.

Comet G-BDIX making it's last ever landing on the runway at East Fortune in September 1981.

G-BDIX was the last of five built in the early 1960s for the Royal Air Force. She served from their transport command centre at Lyneham in Wiltshire, and could carry 94 passengers. In a crisis, the aircraft was sometimes used as a flying ambulance, with room for 50 seats, 12 stretchers and six medical personnel.

The larger airline companies began phasing out Comets in the early 1970s. They were immediately snapped up by charter company Dan-Air, (known affectionately as Dan Dare).  They acquired the last five RAF Comets in 1975 and flew a 119-passenger service with them until 1980.

On board Comet 4C G-BDIX