Discover how this unique piece of Scottish printing heritage found a new home at the National Museums Collection Centre – bringing with it a sprinkle of Harry Potter magic!

The Cossar press has been used to print newspapers around the world, from Brisbane to Beirut. It also inspired the press that prints The Quibbler in Harry Potter and the Deathly Hallows! 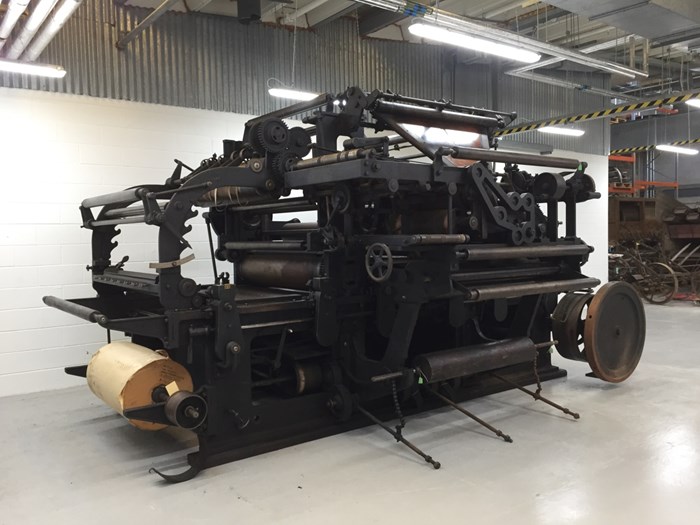 Above: The 1907 Cossar newspaper press at the National Museums Collection Centre.

This 1907 Cossar newspaper printing press was donated to National Museums Scotland in 2012. The press has now been moved from its temporary storage to take its place in the National Museums Collection Centre.

As the last surviving example of these Scottish-invented presses, it has a fascinating story of invention and use, as well as an important place in printing history. Its acquisition also presented a monumental challenge for the national collections.

The Cossar family and the Govan Press

Born in 1841 and brought up in Elsrickle, Lanarkshire, John Cossar (1841–1890) moved to Glasgow in 1872, having run a small printing business in Carluke from 1864 after a printing apprenticeship in Biggar. After moving premises several times around Glasgow, John and his wife Jane White Brown (1844–1926) built their own printing works from 1888 to 1890 on Burndyke Street, with offices facing onto Govan Road. From there they continued to print The Govan Press, which they had established in 1878. 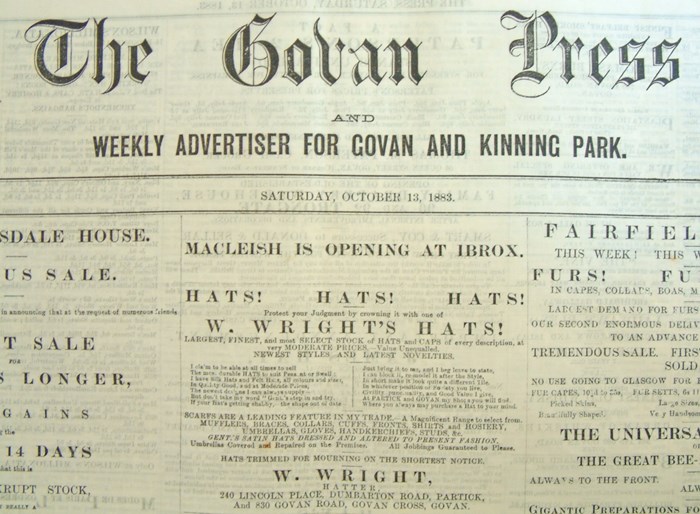 The couple chose to decorate the building frontage with roundels which sandwich their likenesses between those of printing and literary greats Johannes Gutenberg, Walter Scott, Robert Burns and William Caxton. 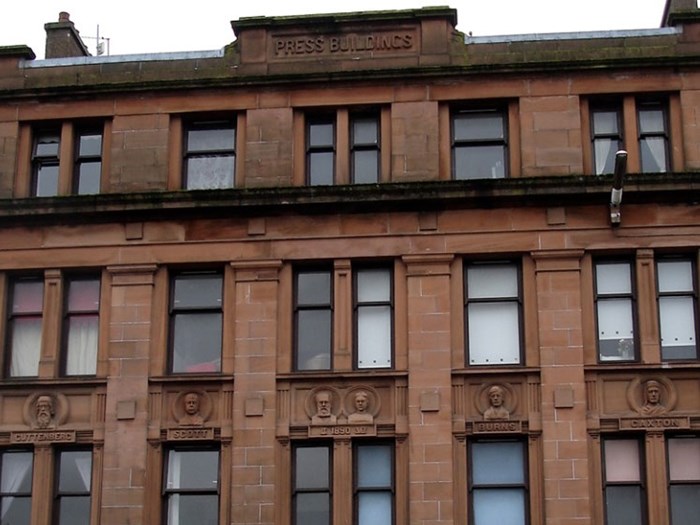 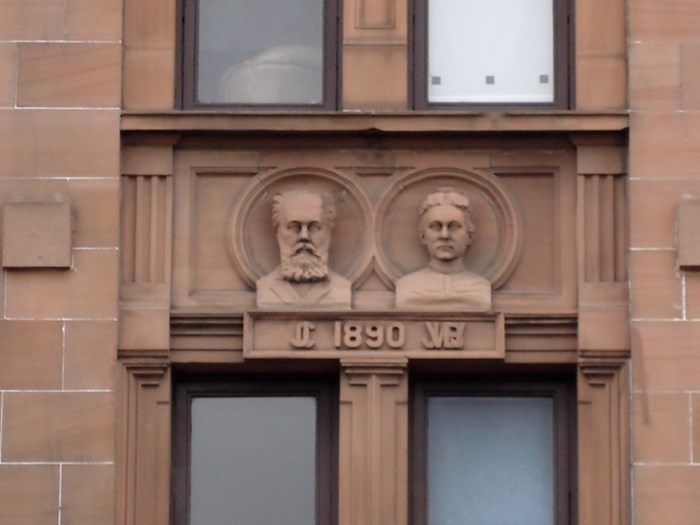 Above: The busts of John Cossar and Jane White Brown.

On John Cossar's death only six months later, Jane White Brown took on and very successfully extended the business to include at least three other newspapers, until her death in 1926. The firm of John Cossar Ltd (also known as the Govan Press) finally closed in 1983. The office building remains, but the printing works was demolished in 1976.

It was one of their sons, Thomas Cossar (1875–1952), who developed the Cossar press while working in the family firm, having studied engineering in the local shipyards. The first patent for his design was granted in 1899. This web-fed flatbed newspaper printing press was an adaptation of the long-established 'Wharfedale' flatbed press. The Yorkshire firm of Payne & Sons of Otley became interested and invited Cossar to join the company to further develop and market his press.

The success of the Cossar press lay in its relative compactness and transportability (for a newspaper printing press). In addition, it did not need the more specialised stereotype plates to print each page used by larger newspaper printers (for an example of a stereo newspaper press see the model of the Foster press made in the Museum workshop in 1888, based on the press then in use at The Scotsman newspaper).

The Cossar press was designed to be 'flat-packed' for global shipping and to be operated successfully by jobbing printers in remote locations, with the same sort of type and equipment needed for general letterpress printing work but with the speed and efficiency gained by printing on a large reel of paper rather than feeding in individual paper sheets. The press incorporated a folding and cutting unit which delivered finished newspapers. The first Cossar press went to New Zealand in 1903 to be installed at the Wanganui Chronicle.

Around fifty of the early design were produced, replaced by a new model in 1915.  Several hundred later Cossar presses were sold and installed around the world well into the 20th century, particularly at locations within the British Empire. They produced such newspapers as The Poverty Bay Herald, The Diamond Fields Advertiser and The Rangoon Mirror.

The Cossar press now in the national collections was installed in Crieff in 1907 under the supervision of its inventor, Thomas Cossar, at the printworks owned by the Philips family since 1862. 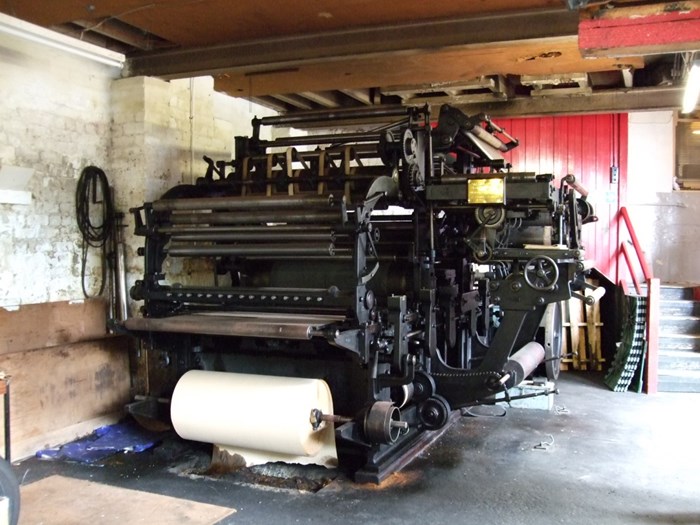 Above: The Cossar press in situ at Philips Printers, Crieff, 2009.

It was one of several Cossar presses installed around the same date to print various Scottish local papers, including ones in Airdrie and Elgin. All of these presses have long been scrapped, making the Crieff Cossar the last survivor. Its drive belt was originally powered by a gas engine and converted to electricity in the 1930s. The press was able to print both sides of a four or eight-page newspaper in one operation, at a rate of 4,000 to 5,000 an hour. 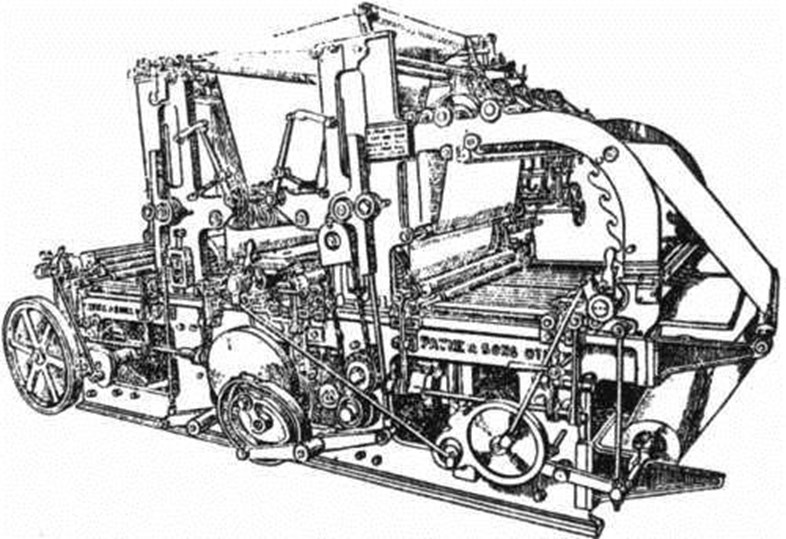 Above: Image of the Cossar press as it appeared in the first edition of The Strathearn Herald printed on it, Saturday 6 July 1907.

The first edition printed on the new press gives an account of the installation, noting:

“
The various parts of the press, numbering several thousand, and weighing in all over 10 tons, have been most expeditiously put together in our premises by the makers' representatives, and on Thursday and yesterday satisfactory trials were made under the superintendence of Mr Cossar.

Donor of the press David Philips, owner of Philips Printers and editor of the paper, recounts how the press printed the weekly Strathearn Herald without fail from July 1907 until its final run on 28 March 1991. 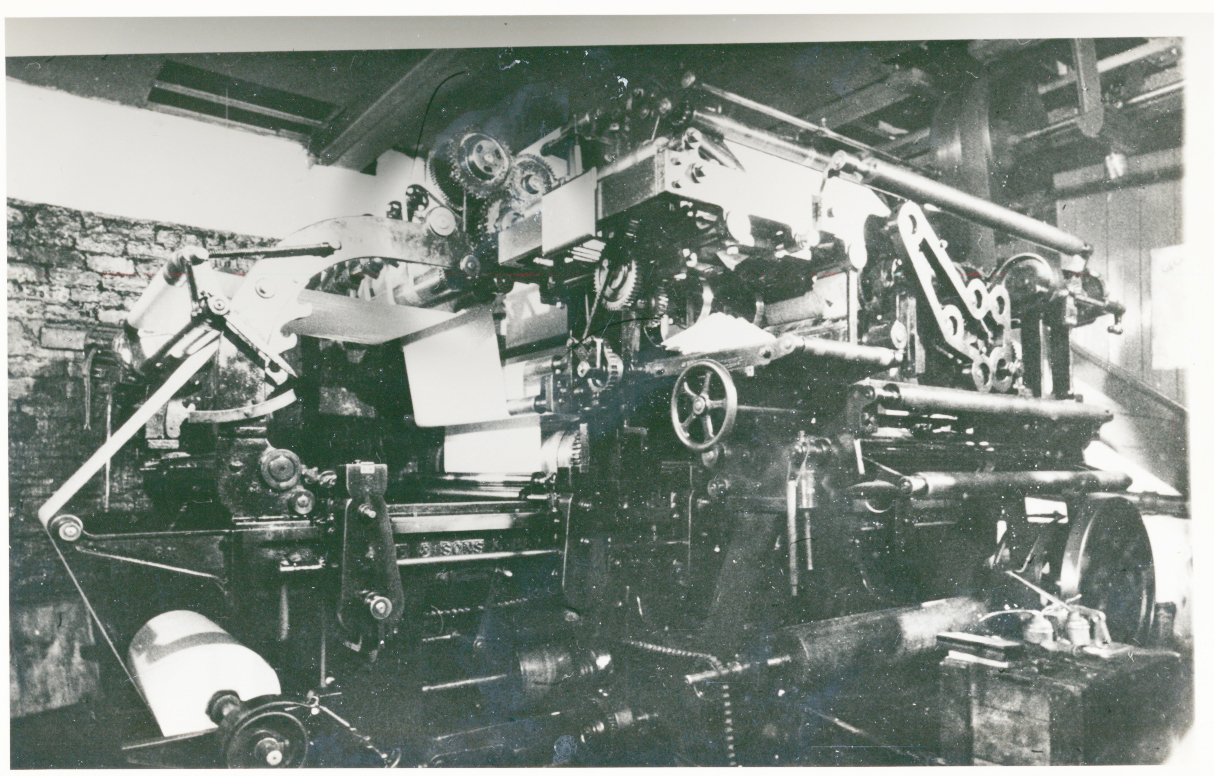 Above: The Cossar press in situ at Philips Printers in Crieff, earlier in its operation.  Courtesy of David Philips.

As well as donating the press to National Museums Scotland, Mr Philips donated the archive related to the Strathearn Herald to the Crieff Public Library. The title is now part of Trinity Newspapers Ltd., following acquisition by their Scottish and Universal Newspapers Group in 1991, when the title was transferred following four generations of Philips family ownership. Production was then updated from hot-metal letterpress to web-offset lithography.

The press was located in the basement of David Philips Printers, with access via a steep, narrow alleyway at the side of the building, giving a maximum width for each load of 90cm. It was down this pend that the parts had originally been delivered 105 years before, after a journey by rail from the Yorkshire factory of Payne & Sons in Otley to Gleneagles and from there by horse and cart to Crieff.

It took three weeks for engineers Robert and Graham of RMH Print Engineering to dismantle the press back to the individual parts in which it had arrived, with each section then mounted onto an individually made pallet. 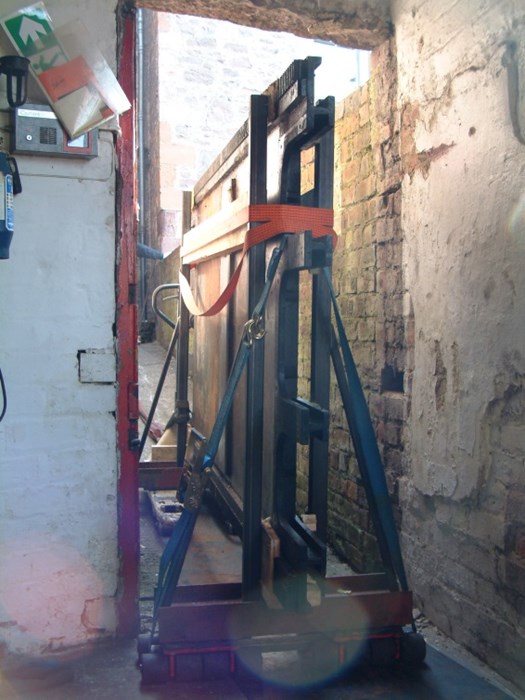 Above: The bed, consisting of one casting weighing more than a tonne, was supported on its side in a purpose-made steel frame. 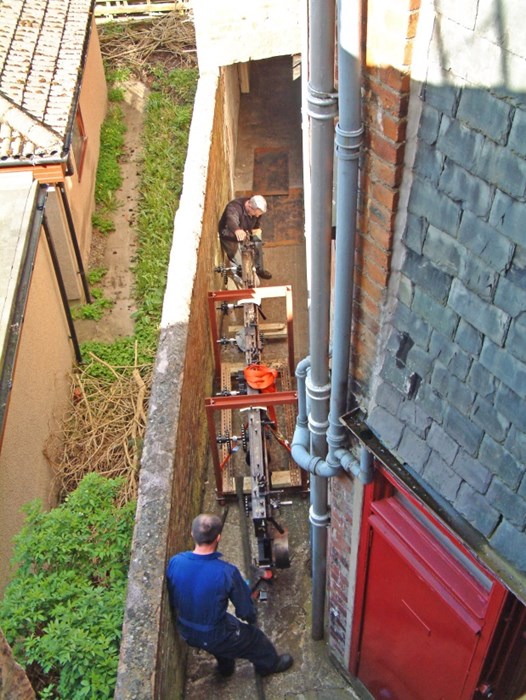 Above: Each of the two side frames were also held upright in a steel support. They were the heaviest single loads, estimated at over two tonnes each. 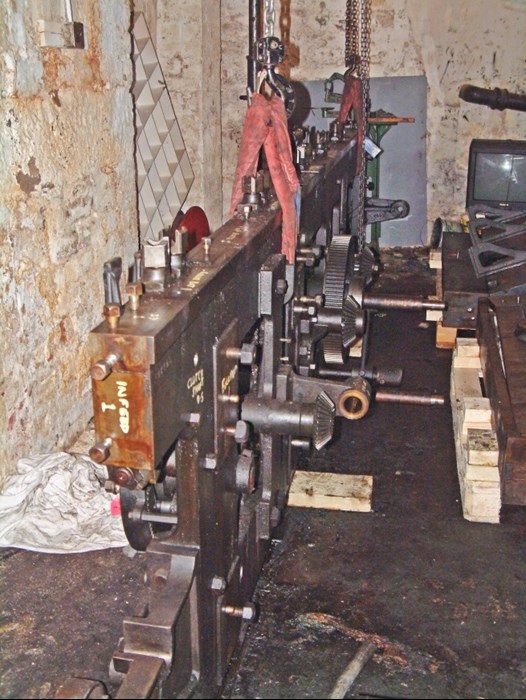 Above: Every section was marked up as it was removed and the whole process was documented by photograph or video. 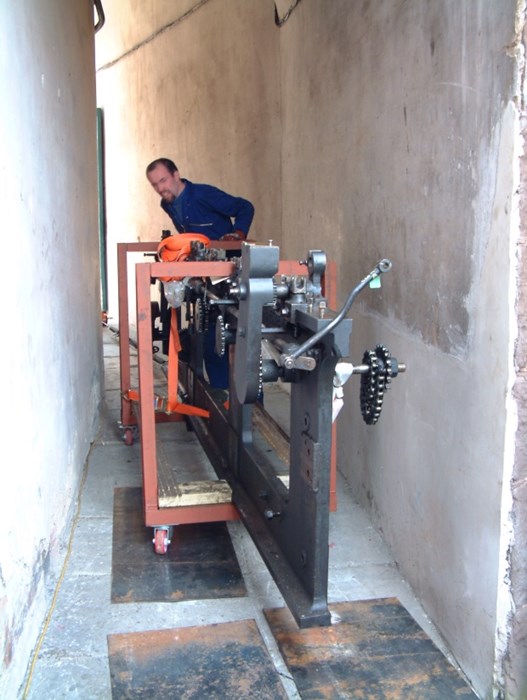 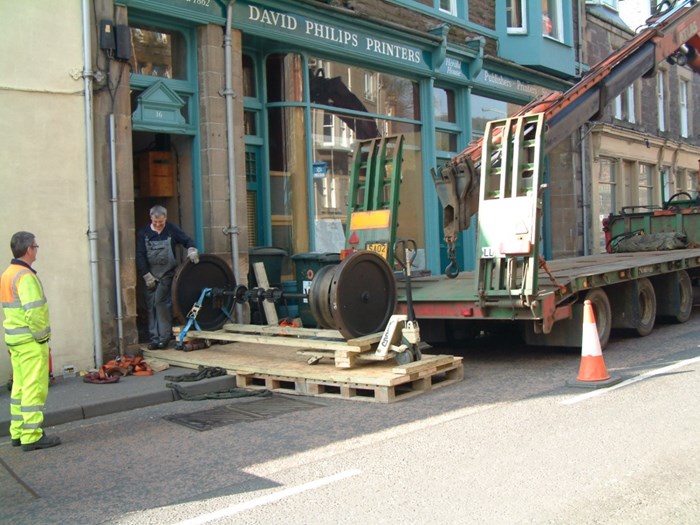 Above: The flywheels and driveshaft proved to be the widest load, with a 10mm clearance at the narrowest point of the pend.

All the palletised loads were then either winched up the alleyway or hauled by hand, to be craned from the pavement onto a flatbed lorry and trailer. The loading process filled two such flatbeds with trailers. The work was carried out over two Sundays and delayed over the Easter weekend to cause least disruption, being completed on 15 April 2012. 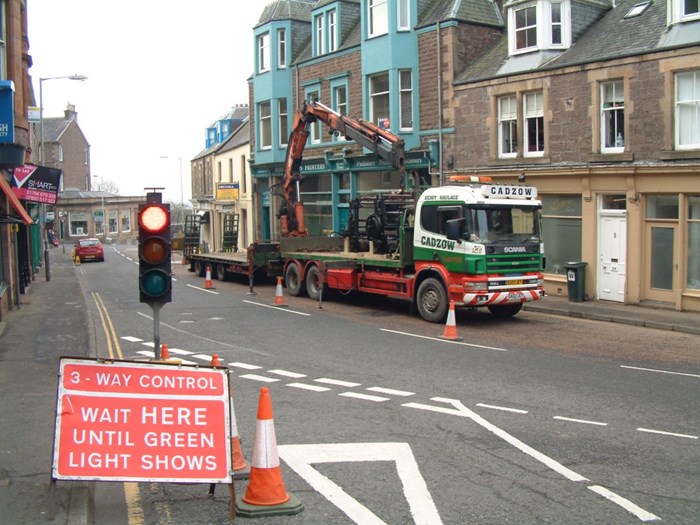 All pallets were moved to storage in Glasgow, at Kinning Park, the same Kinning Park mentioned in the masthead of the Govan Press, above, and within a mile of inventor Thomas Cossar’s birthplace in Govan.  The press was entirely reassembled by December 2012. 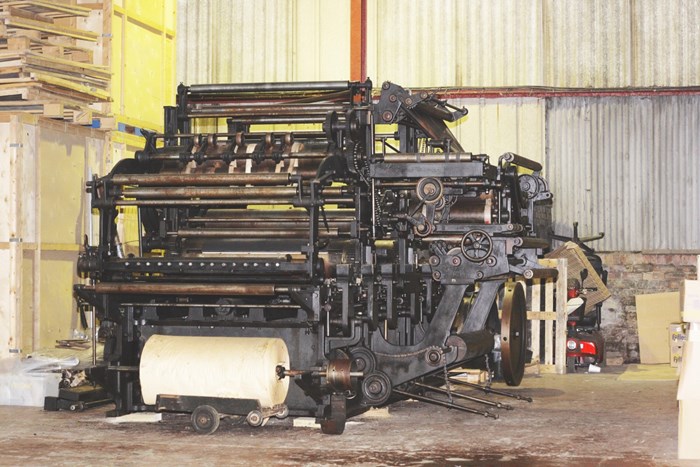 Above: The rebuilt Cossar press in storage in Glasgow, 2012.

There it stayed for seven years, with regular inspection visits, until earlier this month, when the press was moved one last time, from Glasgow to the National Museums Collection Centre in Edinburgh.

This time the dismantling of the press was limited to the removal of the newspaper folding mechanism on the side and the drive shaft at the back. Without removing these, the press would have required a police escort along the M8 as a wide load. With the help of a vast 16 tonne fork truck, the folder and drive shaft were removed in a couple of days. The slimmer press was then lifted onto its transport to Edinburgh. Once delivered, reattaching the various pieces of the press was successfully accomplished within a day and the whole finally manoeuvred into its final location.

From a first visit to the press in its original operating location in Crieff to the successful move to the Museum store, the relocation process has taken ten years.

Cossar presses on TV and film

The Crieff press featured in an episode of the BBC TV series Dr Finlay’s Casebook on 11 May 1969, where it printed the fictitious Knoxhill and Tannochbrae Advertiser. 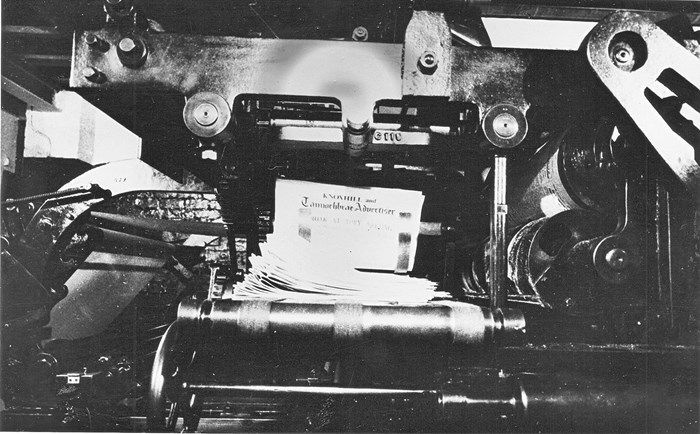 Above: Stills from the TV series Dr Finlay's Casebook, broadcast in 1969. Courtesy of David Philips 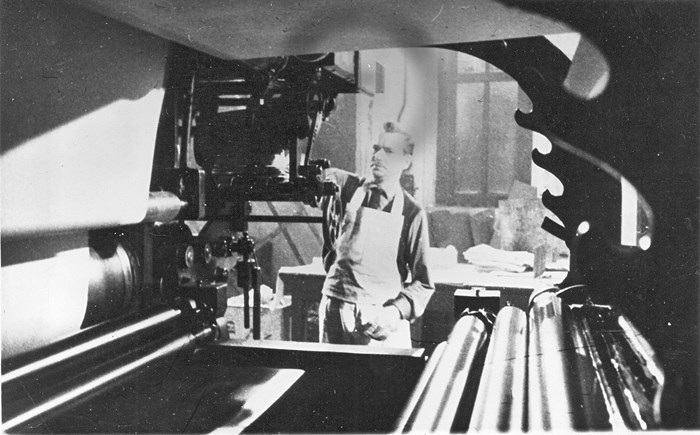 More recently it was used as inspiration for the printing press featured in the film Harry Potter and the Deathly Hallows. 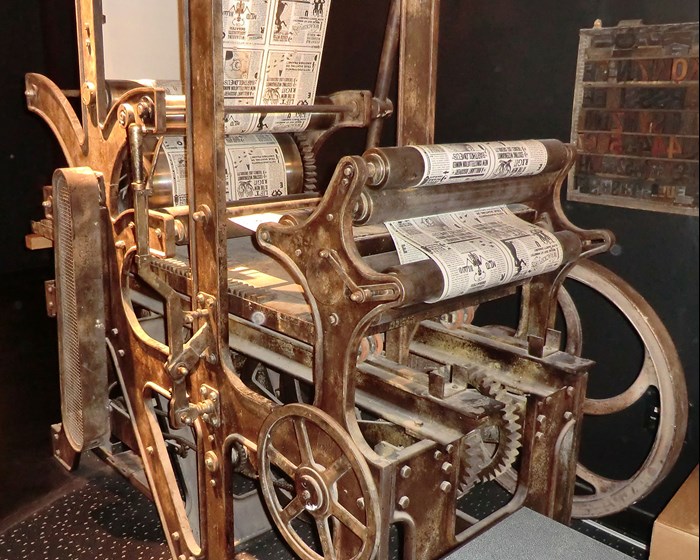 Above: The printing press at the Making of Harry Potter Warner Bros Studio Tour, inspired by the Cossar press at Crieff. Courtesy of Helen Williams.

The final print run of the Crieff Cossar press on 28 March 1991 was featured on BBC Reporting Scotland and can be seen here:

Our thanks to the many people who made the acquisition of the 1907 Cossar press possible, in particular donor David Philips, and:

John Watson and the Watson Foundation