Meet Cybraphon, the moody autonomous robot band in a box created by Edinburgh-based artist collective FOUND. Just like a real band, the diva-like Cybraphon scours the internet for reviews and comments and celebrates or sulks depending on what it finds.

Cybraphon is not currently on display.

Cybraphon won a Scottish BAFTA in 2009 – the only automaton to have received the award.

Inspired by early 19th century inventions such as the nickelodeon self-playing piano, Cybraphon is an interactive version of a mechanical band in a box. Image conscious and emotional, Cybraphon behaves like a real band, obsessively Googling itself every 15 seconds to see how popular it is. The results affect its emotional state (on a scale of ‘delirium’ to ‘desolation’), which in turn affects its playing style. 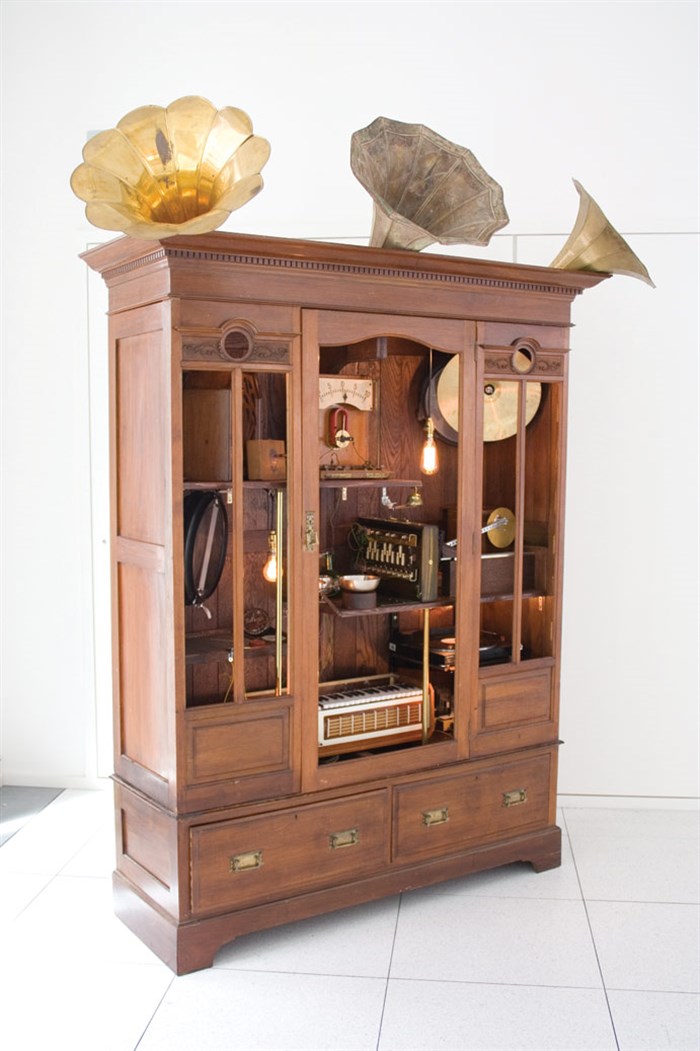 Cybraphon consists of a number of instruments, antique machinery and found objects from junk shops operated by over 60 robotic components, all housed in a modified wardrobe. Volume is controlled by opening and closing the wardrobe door, while its hidden computer ‘brain’ resides in one of the drawers. Using custom software, the ‘brain’ monitors the web and updates Cybraphon’s emotions according to the rate at which its popularity is changing over time. All mentions of Cybraphon online that are indexed by Google are noted, as well as activity on Twitter, Facebook, YouTube, Vimeo, Flickr and MySpace.

A review in a local newspaper, for example, will almost certainly radically change the mood of the installation – and hence the music it plays – soon after it appears. However, Cybraphon is an insecure, egotistical band. A good review will cheer it up in the short term, but once the initial excitement dies down it will soon become disillusioned if its fame does not continue to increase. 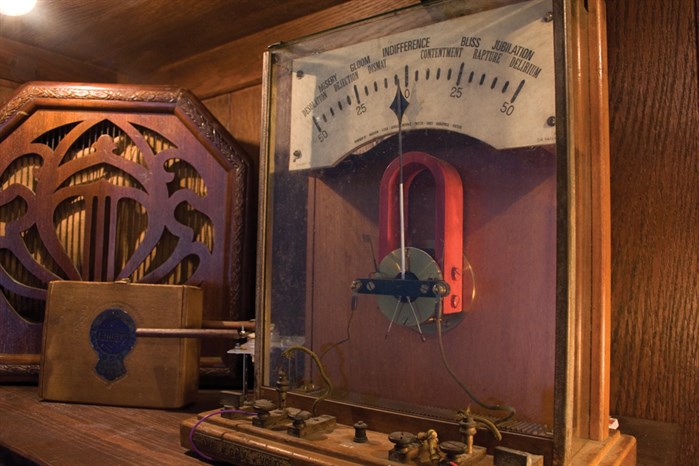 Its emotions are shown on a 100-year-old school galvanometer; a motor-driven crank drives the bellows of an Indian classical instrument modified with 13 robotic servo motors; a switched fan pumps air through a Farfisa organ retro-fitted with robotic keys; 12 chimes are struck by suspended coils; numerous percussion instruments are hit by beaters attached to motors, including a cigar box with an integral spring “reverb”; and a purpose-made vinyl record is cued robotically to play through antique brass gramophone horns. In addition to these musical components, Cybraphon has several internal light sources that are controlled on four fader channels, and infra-red motion detectors to monitor people watching it. 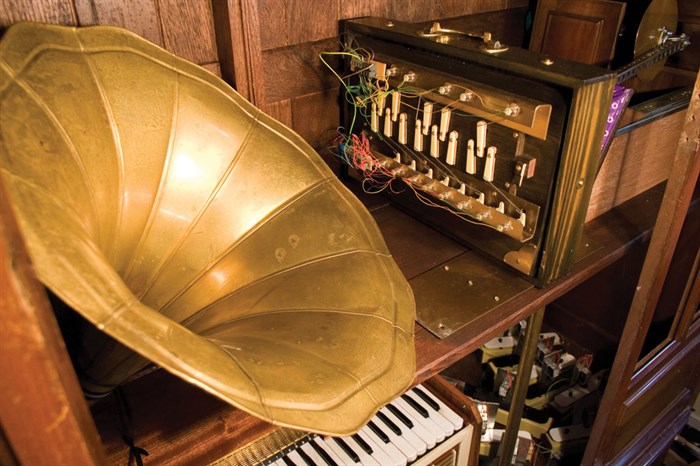 The acoustic music that Cybraphon plays spans a range of emotional states and is all composed especially for it by its creators, Edinburgh-based artist collective FOUND, who coincidentally played at the first Museum Lates event at National Museum of Scotland. Which tracks will be played at any point in time entirely depends on Cybraphon’s mood, which rests in the hands of the online community.

You can see Cybraphon in action here:

In its early days, the Web functioned in many ways like any other avenue for publishing. Information was put there to be consumed, and consumers went looking for information. Over time, however, it became something else: with the advent in turn of web counters, rapidly updated search engines, indexed blog postings, and more recently social networking sites, the Web has become the ultimate popularity contest. How many people regularly search for themselves on Google to see how many hits are returned? Do you care if everyone you know has more friends on Facebook than you do? 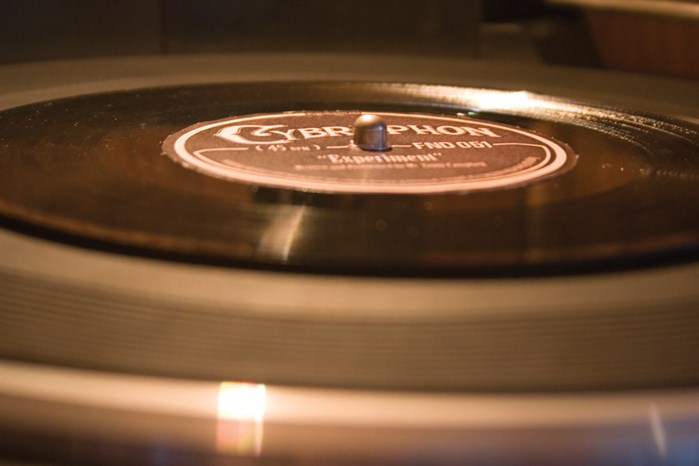 This use of the Web as the perfect “mirror on the wall” for the image-conscious generation saw its ultimate expression with the Myth of the Band That Was Signed Through MySpace. An inevitable obsessive monitoring of MySpace friends and play numbers for all struggling bands followed.

Cybraphon automates the now-familiar process of musical performance, followed by obsessive tracking of online opinion, and subsequent mood swings. It is the 21st century equivalent of the player piano, but instead of your coins, it begs for your attention in the online world.

Why did Cybraphon join the museum collection?

National Museums Scotland has a comprehensive collection of equipment to represent the early days of recorded sound from 1877, the year Edison first patented his recording machine, which used wax cylinders to record voice or music. The earliest disc playing gramophones in the collection date from the 1890s. Over the decades the Museum has collected audio equipment used by a growing audience for popular music, from radiograms to the trendy Dansette record player and transistor radio of the 1960s to the Sony Discman of the 1990s from long playing discs to audio chips made for iPods.

You can see a selection of items from our Communications collection below.

So it seemed a logical next step to investigate collecting material relating to downloadable music and the parallel phenomenon of social media, which now plays such a key role in determining what and who becomes popular. All Cybraphon activity rests in the hands of the online community and as such provides a means of displaying online social interaction in a unique way, manifested through an object. It captures its makers’ interest in social media interaction at a point in time, 2009, when the phenomenon was still relatively new. Its component parts, from gramophones and galvanometers to tobacco tins and Tibetan signing bowls, represent a microcosm of the Museum’s collections. This makes it a unique and exciting acquisition for the Communications collections. Our next challenge is working out how we collect its website and its online presence. 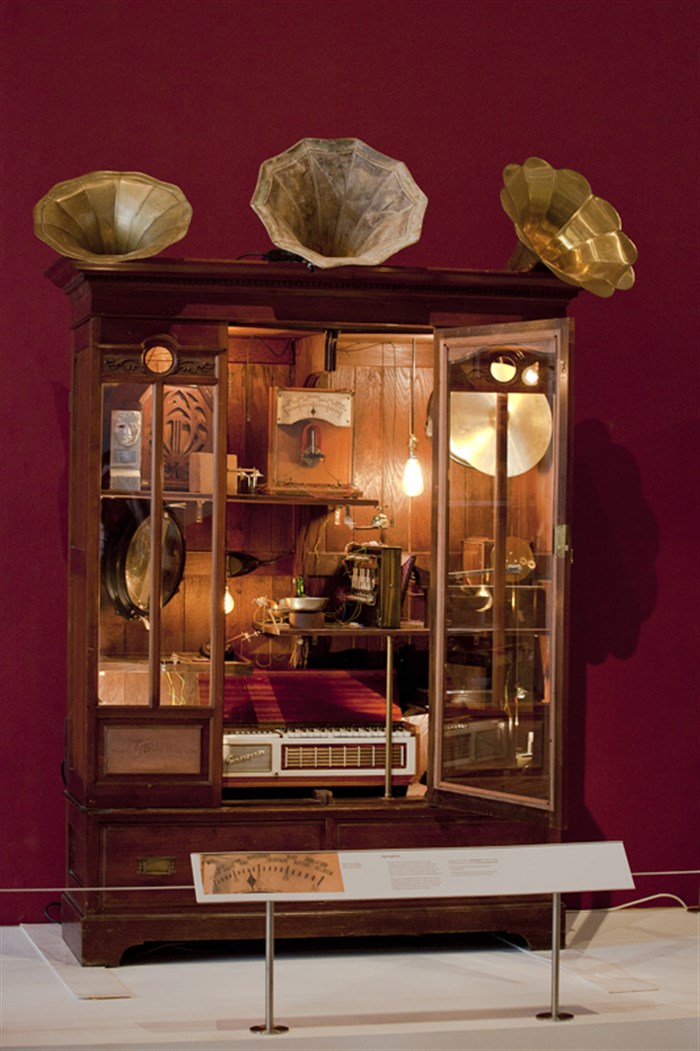 Above: Cybraphon on display in the Discoveries gallery in 2013. Photo by Ruth Armstrong.

In the video below, Simon Kirby and Dr. Gordon Rintoul talk about Cybraphon as it joins the Museum collection.

Cybraphon was commissioned by New Media Scotland's Alt-w Fund with investment from Creative Scotland. Supported by Edinburgh Sculpture Workshop and the University of Edinburgh.