This Enigma machine is of the type used by the German Navy on submarines to encode messages during World War II. Discover the secrets of this famous code maker here.

Bletchley Park is now a museum commemorating the top secret activities carried out in its grounds.

The machine is an electro-mechanical device that relies on a series of ‘rotors’ to scramble plaintext messages into incoherent ciphertext. Similar machines were first made in the early 20th century, and the first ‘Enigma’ was invented by German engineer Arthur Scherbius in 1918, who sought to sell it for commercial, rather than military, purposes. 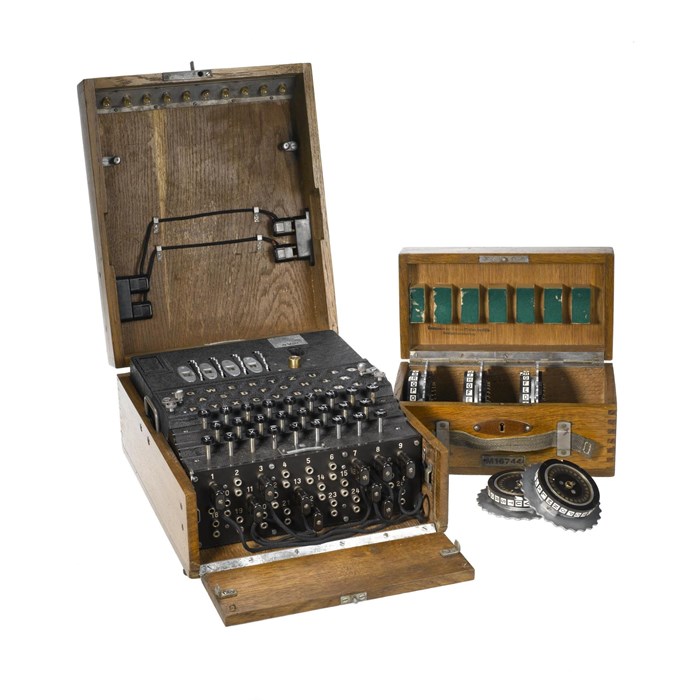 Above: Enigma machine with four rotors.

During the following years, the Enigma was redesigned and improved several times. This particular machine was made in 1944. It uses four code rotors and is housed in a wooden case. With it comes a rare survival, a smaller case containing five interchangeable spare rotors. This naval-type machine is the most advanced Enigma machine used in World War II; those used by the other military forces only had three rotors, and two spares.

The Enigma code was eventually cracked by British Intelligence officers working at Bletchley Park near London, initially using methods developed by Polish mathematicians. The messages sent out each day used a different password, and discovering this password permitted the messages to be read. The machines used in the decoding work were called Bombes. They could only solve one problem, so were not really true computers.

The information received from deciphered material was codenamed ULTRA, as the fact that messages could be deciphered had to be closely guarded to prevent the encryption methods being changed. ‘Ultra’ secrets were deemed even more valuable than information classified ‘Most secret’, previously the highest security classification used.

This ability to decipher German military communications is often thought to have helped bring the war to a swifter end, although decades of secrecy delayed the recognition of the work carried out at Bletchley Park.

How does an Enigma machine work?

This short video demonstrates how a Swiss Enigma machine translates messages into cipher, and how this can then be deciphered.