The phrase 'painting the Forth Bridge' has become synonymous with a never-ending task. Discover how this humble paint mixer played its part in the maintenance of one of Scotland's most iconic structures.

While the Forth Bridge is sometimes referred to as the 'Forth Rail Bridge', this was never its official name.

Building the Forth Bridge

One of the world’s most recognizable landmarks and designated a World Heritage Site in 2015, the Forth Bridge marked a milestone in bridge design and construction, extending the railway beyond the Firth of Forth and opening up new transport links.

Construction started in 1882 and involved around 5,000 workers. Opened by the Prince of Wales in 1890, it was the world’s first all steel bridge, consisting of 54,000 tons of steel and seven million rivets.

Designing the Forth Bridge

Designed by engineers Fowler and Baker, the cantilever design had been used in bridge building for centuries, but the scale of the structure was unprecedented. The steel design was chosen because it looked so strong, thought to rebuild public confidence in the strength of bridges after the collapse of the Tay Bridge in strong winds in 1879.

Blueprint of the Forth Bridge, 1880s.

The bridge was supported on huge granite piers which took three years to build. This was done by sinking caissons – great wrought iron cylinders weighing 400 tons each – to the sea bed and pumping them out so that men could work on the floor of the Firth of Forth, constructing foundations and building up the piers. Compressed air kept a positive pressure in the working area and airlocks and airshafts provided access for men and material since these foundations were built at or below sea level. 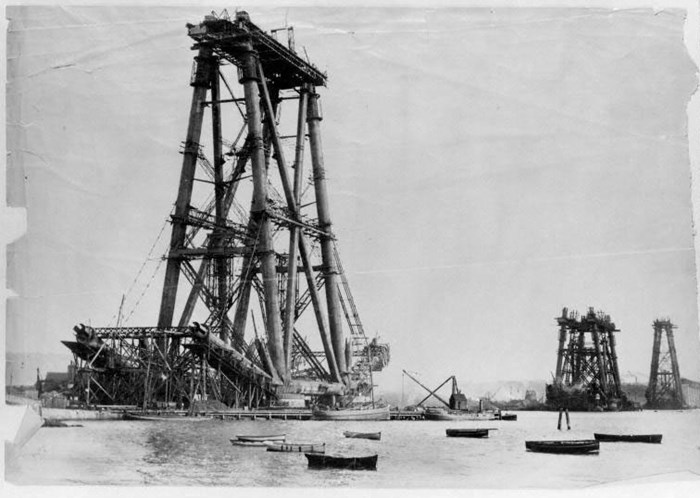 Above: Construction of the Forth Bridge, late 1880s.

Many parts of the bridge were made in a construction yard in South Queensferry. To check that the parts fitted together correctly, these parts were assembled and disassembled in the yard, and then transported to the bridge site.

Work on the superstructure got under way in 1886 and the growing structure became a site of wonder as it grew out from the piers, growing first upwards as the towers were completed, and then outwards as the cantilevers stretched out to meet one another, seemingly defying gravity as they did so.

Workers on the bridge

Around 5,000 people were employed on the Forth Bridge. Jobs ranged from divers working in the caissons to boys catching hot rivets in buckets. Workers were housed in the South Queensferry yard, with living quarters and facilities including shops and dining rooms.

The work could be dangerous. One log book of accidents and sickness had 26,000 entries and records in 1890 noted 57 deaths over the six years of construction. Identical memorials on both sides of the Firth of Forth record the names of 73 men who died building the bridge, ranging in age from 13 to 63. 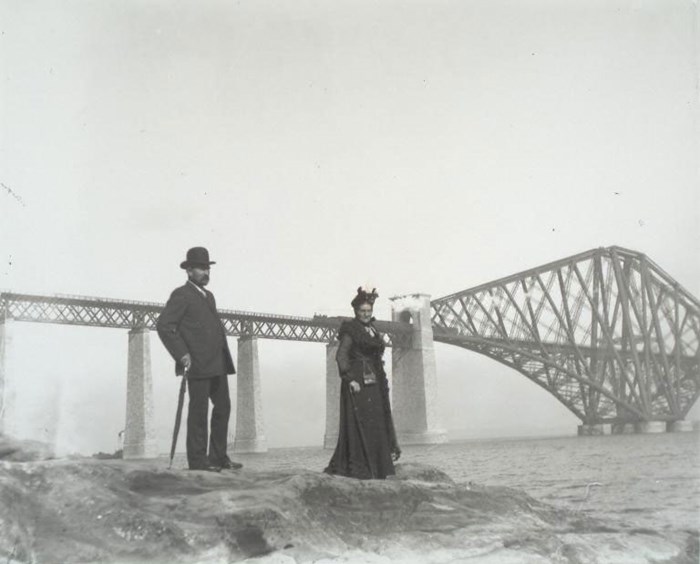 Above: Couple posing in front of the Forth Bridge, 1905.

Joining up the bridge

The bridge was completed in December 1889 and it was officially opened on 4 March 1890, by the Prince of Wales, later King Edward VII.

For the first time, travellers could now journey from London to Aberdeen along the east coast, and the bridge helped open up Scotland to tourists. 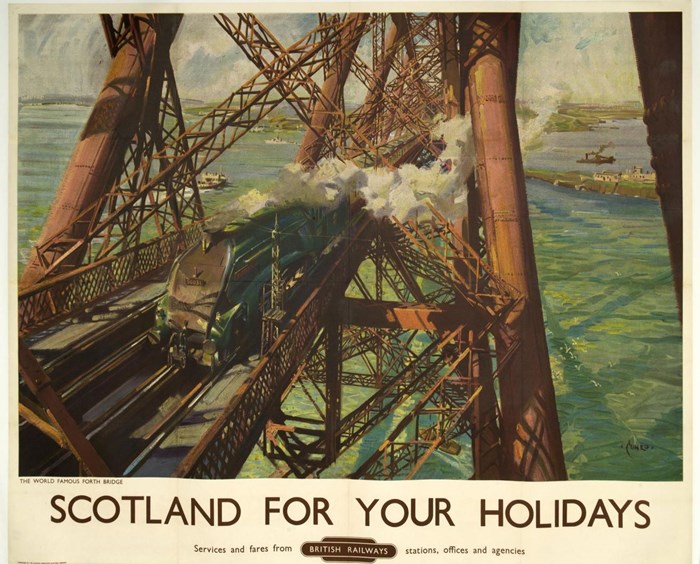 Above: Lithograph advertising poster entitled Scotland for Your Holidays, depicting the Forth Bridge, for British Railways, by Terence Cuneo, c.1952. 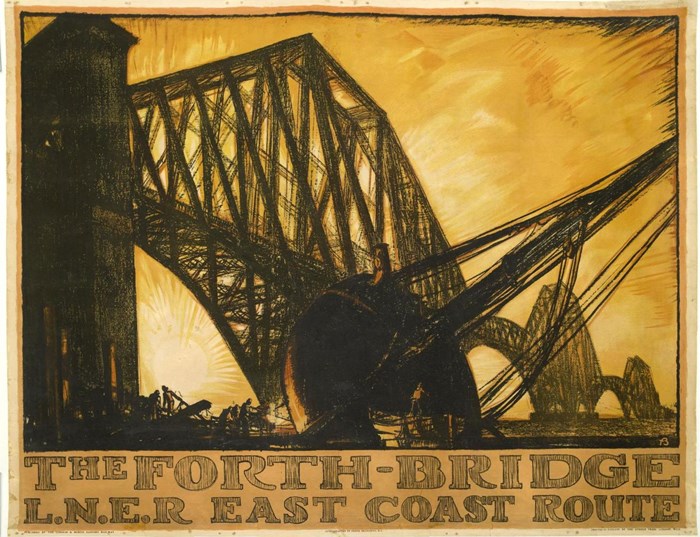 Above: Advertising poster for the LNER (London and North Eastern Railway) East Coast route, depicting the Forth Bridge, illustrated by Frank Bragnwyn, 1920s-1930s.

As well as being an essential part of the railway network in Scotland, carrying around 200 trains every day, the bridge is also a UNESCO World Heritage Site.

Painting the Forth Bridge

The phrase 'painting the Forth Bridge' has come to mean working on an interminable task. This is because it was believed that as soon as the maintenance crew had finished painting the entire length of the 2.5km bridge, they would need to start again at the other end. 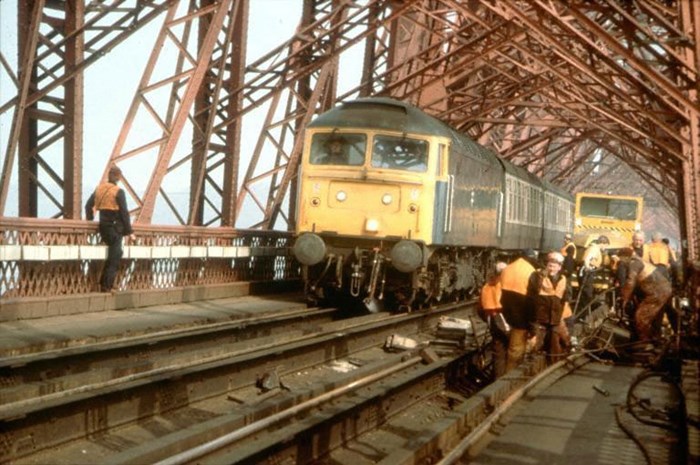 Above: Workers carrying out maintenance on the Forth Bridge, 1985-86.

This hand-operated paint mixer, used on the Forth Bridge, was made by Torrance & Sons Ltd of Bitton, Bristol, in around 1923.

Above: Paint mixer used on the Forth Bridge.

The task of painting the bridge was continuous until 2002, when a new, long-lasting paint containing glass was introduced. The colour, known as 'Forth Bridge Red', was mixed to match the original red oxide colour used in 1890. The bridge is now not expected to need a repaint for at least 20 years!

The Forth Bridge paint mixer is part of