Pocket watch from the shipwreck of the Swan

Salvaged from a shipwreck, this pocket watch has lain under water for over 300 years. But now a high-tech process has uncovered the hidden secrets of this rusty artefact.

Niccholas Higginson. No other example of work by this maker has so far been found in other museum collections.

A watch like this would have belonged to someone of considerable wealth or high social standing; it is therefore most likely that it belonged to the Swan's captain, Edward Tarleton.

Only a few watches from this period have been recovered from archaeological sites. Of note are a 17th-century pocket watch which was part of the Cheapside hoard found next to the Thames, and an 18th-century silver pocket watch found on the wreck of HMS Pandora in 1983.

What happened to the Swan?

In 1653, Oliver Cromwell, leader of the English Commonwealth forces that had invaded and subdued Scotland, sent a flotilla of six ships to put down a Royalist rising on the west coast. This force included a small warship called the Swan.

During the operation, a furious storm blew up, dismasting three of the ships and dashing the other three, including the Swan, to pieces against the rocky shore.

The wreck of the Swan lay at the bottom of the Sound of Mull until 1979, when a naval diving instructor, John Dadd, rediscovered it. Since then, a ten year programme of underwater archaeology has yielded a large number of important finds and stabilised the site, which was at risk because of the strong local currents. This site has provided a wonderful snapshot of life on board a small warship of the mid-17th century.

What was found in the wreckage of the Swan?

Among the objects recovered from the Swan were: a hoard of silver coins, a brass lock-plate, a Scottish snaphaunce pistol, cast iron guns, a small iron anchor and some prized possessions such as an ornate sword hilt decorated with gold and silver wire, and a pocket watch.

The pocket watch was particularly interesting, because only a few watches made in this period have survived in an underwater archaeological environment. 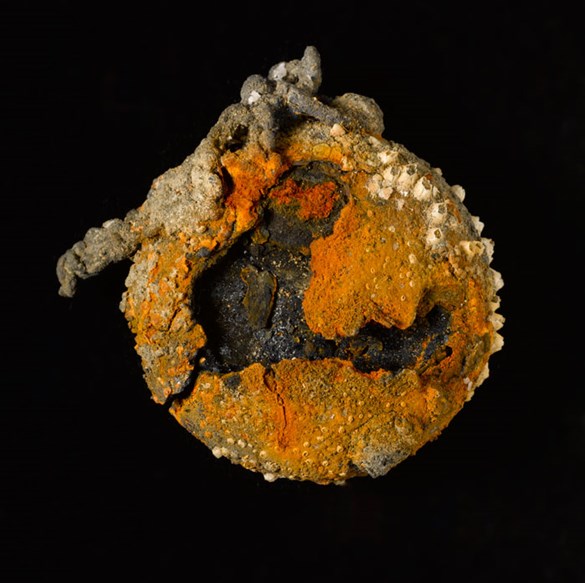 Above: The pocket watch discovered amongst the wreckage of the Swan.

How was the watch examined?

From the outside, the watch appears corroded beyond recognition: a rusty mass encrusted with barnacles. All that can be seen of the watch through breaks in the outer case is a black mass of silver corrosion, although X-ray radiography undertaken in 1994 surprisingly revealed that some parts of the watch’s mechanism had been preserved. However, further interpretation was limited, as Lore Troalen, Analytical Scientist in the Conservation and Analytical Research Department at National Museums Scotland, explains:

"At this point, conservation work could do little to reveal further the mechanism without irreversibly changing the object. Until some innovative research was recently published using X-ray computed tomography (CT) to image an ancient Greek device called the Antikythera Mechanism. The technique seemed very promising for the study of archaeological objects, so we decided to apply it to the watch hoping to unveil more information."

"Three dimensional and two dimensional CT will allow us to move around the virtual space, to strip away components, and slice it in any arbitrary direction to see interior details. So technically it should be possible to view with clarity the tiniest part of the mechanism and maybe also some engravings."

The results were amazing. Not only is the watch’s face clearly visible, engraved with Roman numerals and an English rose at the centre, but the scans also show the workings of the watch in fine details.

The results were amazing. Not only is the watch’s face clearly visible, engraved with Roman numerals and an English rose at the centre, but the scans also show the workings of the watch in fine details.

By examining the scans, Darren Cox, conservator of clocks and watches, was able to conclude that the watch is a single train movement, typical of the period. This means that the mechanism keeps time but does not strike or chime.

"The images obtained were astonishing; the condition of surviving interior pieces exceeded our expectation… All of the steel (arbors, pinions, the pallets, balance wheel, etc) has corroded and appears missing in the X-ray, while the brass work appears to be in much better condition. The wheels are clearly visible to the extent that the teeth can be counted!

"The inner case appears to be very simple; which could correspond to a 'puritan' watch, a style relatively free of decoration. However, decoration on watches during this period was moving from the inner case to the outer case, and many inner cases on watches (not only 'puritan' ones) made in the second quarter of the 17th century were plain. Unfortunately there is too little evidence left to describe the outer case, which would confirm the style of the watch." 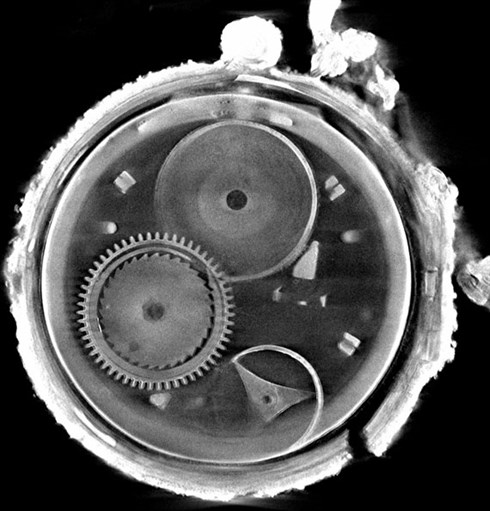 Above: 2D slice through the 3D-CT volume showing the fusee click teeth.

Who made the pocket watch?

Perhaps the most exciting discovery was the name of the maker, “Niccholas Higginson, Westminster”, engraved on the back plate.

Research in Clockmakers' directories showed that Higginson was registered in the Clockmakers’ Company from 1646 until 1656, with some records of him working outside the city of London in workshops in Chancery Lane and Westminster. This authenticates the date of the watch, prior to the sinking of the Swan. 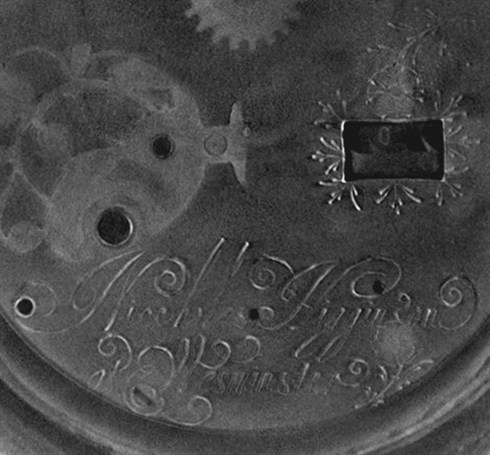 Above: 2D slice through the 3D-CT volume showing a floral engraving and the engraved signature: Niccholas Higginson of Westminster.

This film shows an x-ray of the watch, in which its mechanism can be clearly seen.