At the centre of the Earth in Space gallery stands an impressive piece of apparatus, the Schmidt telescope. Discover how this revolutionary telescope was invented, and how it found a home at the National Museum of Scotland.

Cox, Hargreaves and Wilson. The base was made in 1930 by Grubb Parsons of Newcastle.

The largest Schmidt telescope in the world can be found in Karl Schwarzschild Observatory in Germany.

How does the Schmidt telescope work? 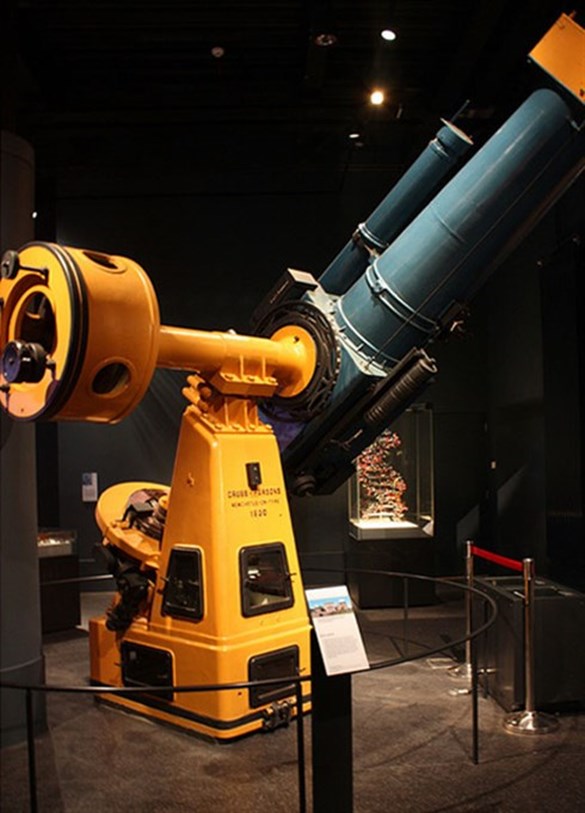 Above: The Schmidt telescope in the Earth in Space gallery at National Museum of Scotland.

This reflecting telescope is a camera, imaging directly onto glass photographic plates. Before its invention, astronomers were unable to photograph large areas of the sky in any great detail. Instead, they had to build up a picture using narrow images, which was extremely time consuming and meant larger objects were sometimes missed, or use smaller lenses, which could not capture faint objects.

This camera telescope was invented in 1930 by optician Bernhard Schmidt (1879-1935) working at Hamburg observatory. a Swedish-Estonian optician. Schmidt’s groundbreaking solution was to use a spherical mirror within the telescope, correcting distortion (known as ‘spherical aberration’) with a thin, aspheric lens, now called a ‘Schmidt corrector plate’. Because its revolutionary design provided a large field of view, it could photograph bigger swathes of sky, far more quickly. The images it produced could be used to build up an atlas of the sky. 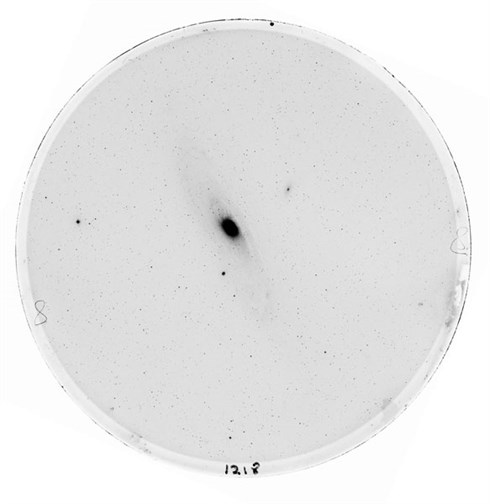 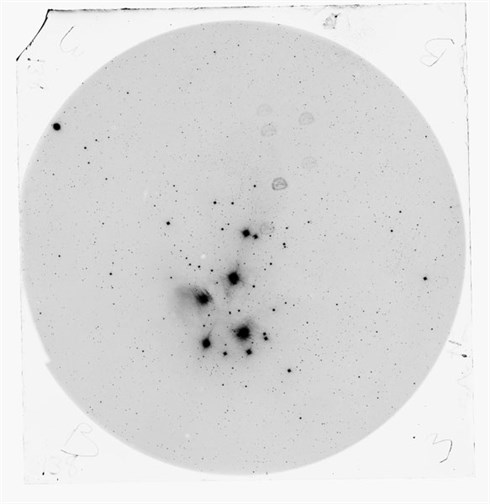 Where does the telescope come from?

This particular telescope was one of the first Schmidt telescopes to be set up in a British observatory. It was installed in 1951 in the West Dome of the Royal Observatory on Blackford Hill, Edinburgh. The mount is prominently dated 1930; this is because it was reused from a previous telescope.

In the early 1960s this telescope became the most widely used telescope on Blackford Hill. From 1970, images taken with it were used in the observatory's pioneering development of a plate scanner to convert glass astronomical photographs to digital data. This telescope retired later in the 1970s and the four inch glass photographic plates it used are no longer made.

From 1973 the astronomers of the Royal Observatory, Edinburgh operated the UK Schmidt telescope in Australia, at a site further away from air and light pollution, and with better weather.

What was it like to use the Schmidt telescope?

Dr Bill Samson, a research student at the Royal Observatory from 1966-1969, explains what it was like to use the Schmidt telescope.

"Each evening, weather permitting, an astronomer would be scheduled to work from dusk until dawn on the Schmidt Camera. Sometimes he would be taking photographs for his own research work, and sometimes for other people’s, depending on what happened to be high in the sky at the time.

"The astronomer would drop in to see the night watchman on duty at the observatory, to avoid being mistaken for an intruder, then would make their way up the spiral staircase to the floor directly below the telescope. On that floor was a large fridge full of photographic plates of various kinds – some for blue light, some for yellow, some for ultraviolet and some for infrared. They had to be kept at a low temperature – especially the infrared ones – to prevent them clouding over before they could be used.

"A box of the right kind of plates was taken up to the dome, where there was a tiny darkroom for handling them.

"The dome was opened and the cap taken off the telescope. Occasionally a sleepy astronomer would forget this step and spend the whole night taking photographs with the cap on. 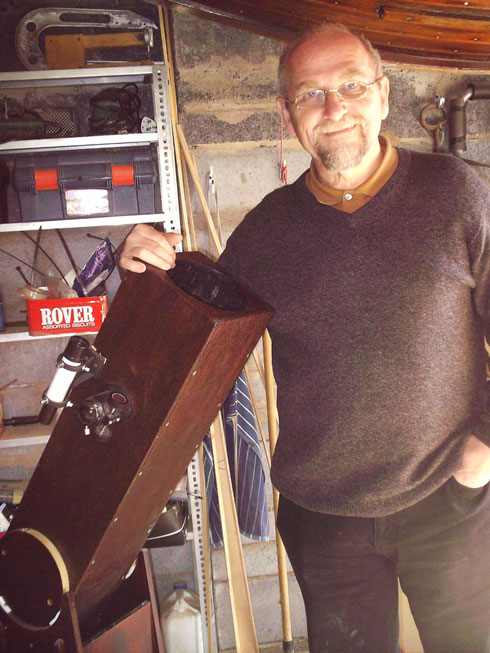 Above: Dr Bill Sansom with his own home-made telescope.

"The astronomer would then climb up a stepladder and extract the plateholder – a heavy brass box that held the plate during an exposure. The plates were made of thin glass, coated on one side with photographic emulsion, and when the plateholder was closed, the plate bent into a slight bulge to form a surface where the focus would be perfect right across the plate. A filter of some kind would also be inserted to allow only light of the right colour to pass through to the plate.

"The plateholder was replaced and the telescope pointed to the part of the sky that was to be photographed.

"Fixed to one side of the telescope – which is actually a giant camera – is a smaller telescope with an eyepiece in it. The astronomer would line this up on a convenient ‘guide’ star then open the shutter to start the exposure.

"Then came the toughest part of the job, which was keeping the guide star centred on the cross hairs while the exposure was taking place. This could mean standing on a set of steps for half an hour staring into the eyepiece holding a small control box which could move the telescope up/down/left/right to keep it pointed at the star.

"Sometimes the telescope would break down during the night, and so precious were evenings with dark clear skies that an engineer was on call at all times to fix the telescope right away when it went wrong. Naturally, engineers weren’t always delighted to be woken at 3am to come out and fix the telescope. Angry words could be exchanged when the fault was something as simple as forgetting to switch something on! People aren’t at their brightest in the wee small hours.

"The next day the astronomer would take the box of exposed plates to a darkroom where they were developed. Once the developed plates were dry, they were examined under a microscope to make sure the telescope hadn’t wobbled accidentally during the exposure.  If that had happened, the star images would appear as short trails rather than perfectly circular dots. Bad plates like this were useless and had to be discarded.

"The good plates were measured using special instruments. There were Becker Iris Photometers, which measured the sizes of the star images to allow the astronomer to tell how bright the stars are. When this is done with plates that picked up different colours of light, it was possible, too, to tell the temperatures of the stars and how much their light was reddened by passing through clouds of dust.

"Sometimes a big prism was fixed to the top of the telescope so that the stars’ light was split into short spectra, allowing the astronomer to tell what the stars were made of.  These plates were measured on another instrument called a Joyce-Loebl Microdensitometer.

"At the start of the 1970s things changed a lot for the astronomer. Auto-guiders were introduced to keep the guide star centred in the eyepiece, allowing the astronomer to go for a cup of tea while the plate was being exposed.

"Automatic measuring machines like GALAXY and COSMOS were also introduced to speed up the process of measuring the images on the plates."

How was the telescope installed in the Museum?

Removing the telescope from the dome at the Observatory was something of a challenge, made possible through the fortuitous timing of major restoration work to the dome and the experience of our engineering conservation team and contractors. Before it was removed from the Observatory, it wasn’t even possible to tell how much the telescope weighed, as it was perched on top of a column, or pier, about 10 metres tall. We now know it weighs over 3.2 tonnes!

It now takes pride of place in the Earth in Space gallery, which investigates our planet’s place in the universe.

With thanks to the UK Astronomy Technology Centre, who donated the telescope to the Museum. 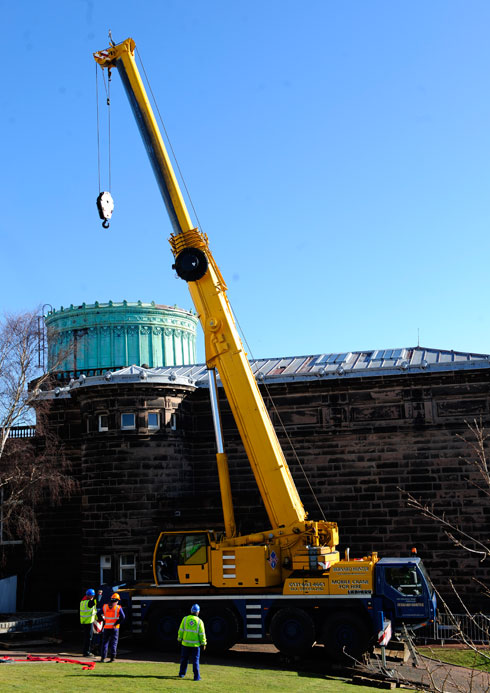 Above: Hoisting the telescope from the Royal Observatory. 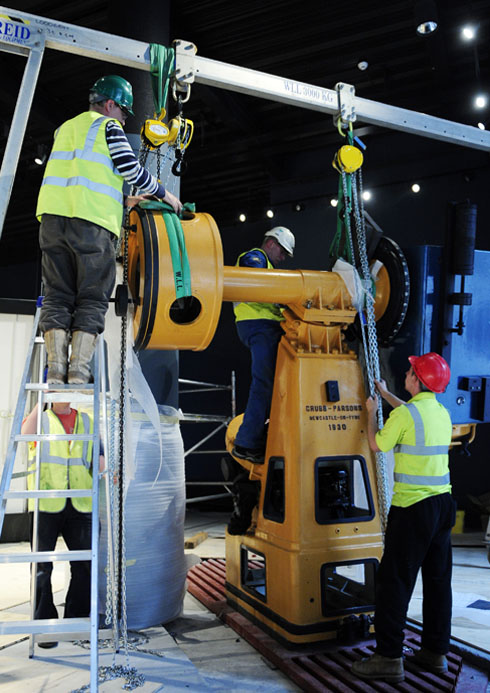 Above: Installing the telescope in its new home at the National Museum of Scotland.