Fertility figure or Iron Age goddess of the straits? This carved sculpture of a female dates from around 600 BC, but its origins remain unknown.

Alder, with quartzite pebbles for eyes

If you find an archaeological object, according to Scots law you must report it to the Treasure Trove Unit. Finders may be eligible for a reward. If you find waterlogged wood or similar material, keep it wet! 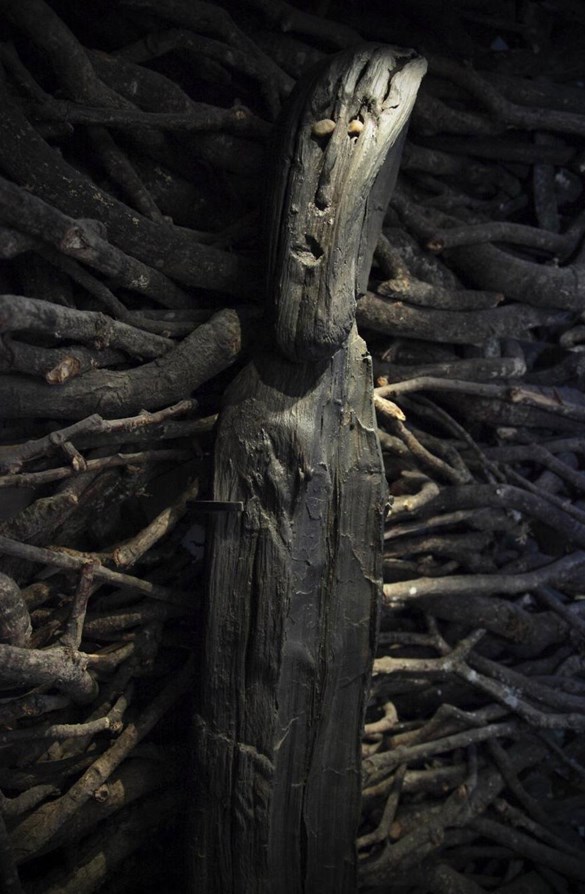 The mysterious Ballachulish figure is a roughly life-sized figure of a girl or goddess, carved from a single piece of alder, with pebbles for eyes. It was found during building work in November 1880, under deep peat. It was lying face down on the gravel of an old raised beach, around 120 metres from the shore of Loch Leven. It might originally have stood beside a pool. The figure has been radiocarbon-dated to around 600 BC, making it over 2,500 years old, and belonging to a period when iron was beginning to be used in Scotland.

Details of the carving are hard to see, but are clearest on the old photograph. The slender body is naked, and seems to be hairless. The lower part is definitely female, but the chest is flat, so the figure may represent a girl or young goddess. She is shown holding objects which must have had great significance, but cannot now be securely identified. Her pebble eyes stare out and her mouth is slightly open. The legs end in a solid block of wood, with a rectangular hollow carved into its front. The height of the figure, when found, was around 145 centimetres (just under 5 feet).

Pebbles found embedded in the bottom of the block suggest that the figure had originally stood on the raised beach, and had fallen over – or been deliberately toppled over – before the peat formed. Under and above the figure were found intertwined branches and twigs, with a few straighter poles. These could be from a wickerwork container, or a little shrine surrounding the figure.

Although the figure is unique in Scotland, other wooden figures dating to the Bronze and Iron Ages are known from Britain, Ireland and the Continent. Often these are found in special places – beside a spring, or where a trackway crosses the wetland – and they are thought to represent supernatural beings. Ballachulish is a special place too: the figure would have overlooked the dangerous straits linking Loch Leven with the sea. Perhaps this odd-looking figure represented the goddess of the straits, to whom prehistoric travellers would need to make an offering if they wanted to be sure of a safe crossing.

The area is rich in archaeological remains. Within half a kilometre there are several Bronze Age burial monuments, and some years before the figure was dug up, a peat-cutter discovered ‘several barrow-loads’ of worked flint, inside a round building, deep under the peat. The Ballachulish Moss area is nationally important for its archaeology, and is a Scheduled Ancient Monument.

Today, the Ballachulish Figure looks very different from when it was found. There were no scientific techniques to preserve waterlogged wood in the 1880s, and although people wanted to keep the figure wet, they could not find a container large enough, so they decided to let it dry out. It was taken to the (then-named) National Museum of Antiquities of Scotland in Edinburgh over two weeks after its discovery, and during the journey, it broke at the legs. When it dried out, it warped and cracked, and a large piece broke off.

See the Ballachulish figure in 3D on Sketchfab

The Ballachulish figure was 3D scanned by Digital Heritage Age as part of The Pallasboy Project. Explore the figure from all angles below.