A 10th-century hoard found on the Isle of Skye contained 19 dirhams, silver coins from the Islamic emirates of central Asia. These were not exotic curiosities collected by a Viking traveller, but evidence of trade routes connecting Scotland across vast distances at the turn of the first millennium.

This Viking-age hoard contains objects from Ireland, Anglo-Saxon England, the Baltic and as far as modern-day Uzbekistan.

from Storr Rock, Isle of Skye.

In January 1891, the Queen’s Remembrancer received two silver coins from the Portree Procurator Fiscal. He passed them on to the Keeper of the National Museum of Antiquities, Joseph Anderson, who recognised them right away as dirhams of the Samanid dynasty (AD 892-1005). Similar coins had been found in a Viking-age hoard from Skaill, Orkney, so Anderson requested the findspot be searched further. 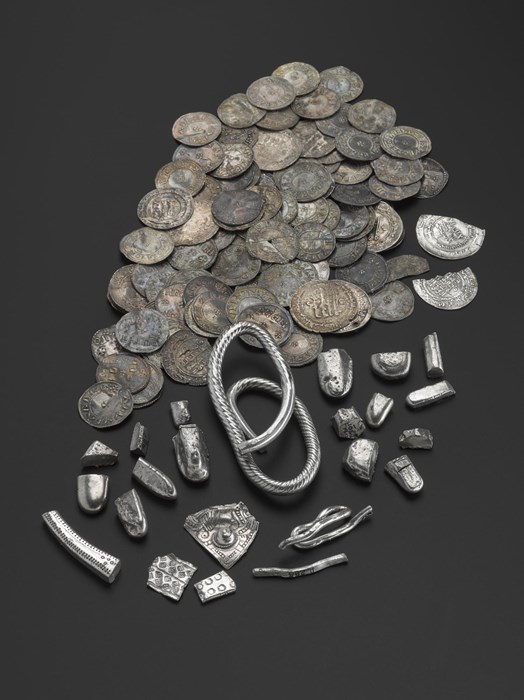 The Storr Rock Hoard, Isle of Skye, deposited c. 940, including 18 dirhams of the Samanid dynasty.

It was a good idea: the search turned up 110 coins and 23 other fragments of hacksilver. This has been called the Portree, Skye or Trotternish hoard, but is now known as the Storr Rock Hoard after the famous landform near which it was found. It is a significant find in various ways, but most notably for its exotic coins. How did dirhams with Kufic script end up buried on a beach on the Isle of Skye? 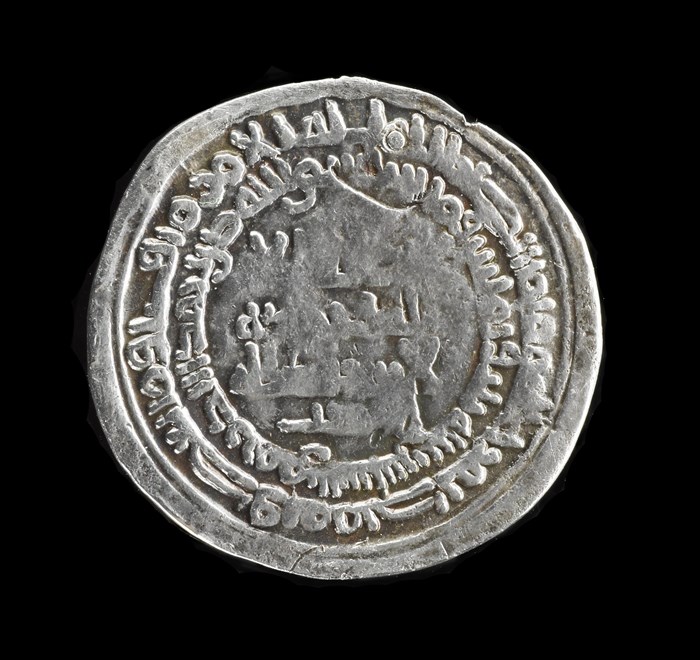 Dirhams were the standard silver coinage used in the Islamic world from Spain to central Asia, but they are also found in hoards of the ninth and tenth centuries across northern Europe. They are incredibly rare in Scotland. There were originally 19 from Storr Rock, but one unidentified dirham from was apparently kept by the estate owner who had it fashioned into a brooch; sadly this has not been seen since 1891!

Elsewhere, we know of two fragments from the Talnotrie Hoard, Dumfries and Galloway (deposited c. 875); a single find of the 10th-century from Stevenson Sands, Ayrshire; and coincidentally, another 19 from the large Skaill Hoard, Orkney (deposited c. 950-70). In addition to these, there were said to be fragments of dirhams from the 10th-century Machrie, Islay hoard found in 1850, but these have not survived.

The dirhams of Skye

The surviving 18 dirhams of the Storr Rock hoard are dated 282-332 AH (anno Hegirae in the Islamic calendar, corresponding to AD 895/96 to 941/42). They were minted by emirs of the Samanid dynasty in Samarkand and al-Shash (Tashkent), both in modern-day Uzbekistan. The Samanid dynasty entered the international stage in AD 892, acquiring key silver-producing mines as they expanded across central Asia. They ruled a vast territory semi-independently under the Abbasid caliphate based in Baghdad, and were ideally placed to access trade routes to the Near East, India, and north up the Volga to the territory of the Rus’, a people considered to have been Scandinavian in origin.

As with all dirhams, they bear verses from the Quran, as well as a date, mint statement and attribution. The Storr dirhams include 5 coins of Ismai’il bin Ahmad (r. 892-907), 4 coins of Ahmad bin Isma’il (r. 907-914), and 9 coins of Nasr II bin Ahmad (r. 914-943). The vast majority of all dirhams found in northern Europe come from these mints, issued by these first three Samanid emirs.

In emerging markets stretching from the North Sea to the Volga, these dirhams of high quality silver were likely exchanged for a variety of goods from the north: fine furs, walrus ivory, and, perhaps most lucrative of all, human slaves. There are so few from Scotland that it has been thought that Viking merchants used dirhams as bullion, or for their weight in silver, soon to be melted down into ingots and brooches. This was the first influx of pure silver into Scotland since the last shipments of Roman coins and hacksilver centuries earlier.

The Storr Rock, Isle of Skye

from the Scottish Life Archive.

What sets the Storr Rock dirhams apart is their condition. Of the other dirhams from Scotland, only a single coin from Skaill is complete, whereas on Skye, all but 3 are complete, despite some being half a century old by the time of deposition. 2 of them are pierced, as if worn in a pendant, indicating they had circulated in different ways before being deposited in this hoard. The Storr Rock Hoard is also notable for its collection of 91 Anglo-Saxon coins, including issues from Plegmund, Archbishop of Canterbury (AD 890-914) to Aethelstan (AD 924-939), which are also largely undamaged.

Along with the coins, the hoard contains 23 fragmented silver ingots and ornaments cut to weight as ‘hacksilver’, known from Viking hoards such as Cuerdale, Cumbria. The inclusion of a rare ‘Permian’ spiral ring, a silver neck-ring used as currency in Eastern Europe and southern Scandinavia, is a sign that these dirhams were exchanged in a Baltic Sea marketplace, and made their way to someone more used to trading with bullion in the Irish Sea zone. It seems the Storr Hoard was deposited around 940 by someone plugged into a trade system stretching from Ireland to Uzbekistan, but it is not necessary for the individual to have physically travelled as far as central Asia. 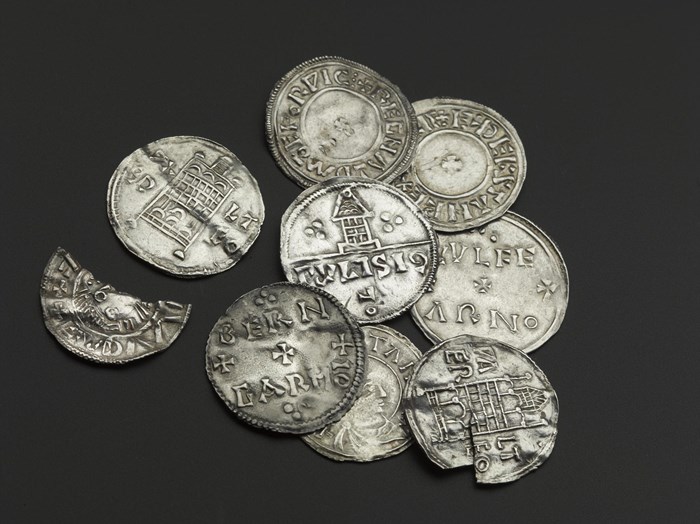 Coming back to the dirhams, Recent work taking all hoards and single finds together suggests that items like hacksilver and coins circulated together in a sophisticated ‘dual economy’ that could use coinage and bullion as needed. This would allow traders like those behind the Storr Hoard to be flexible, able to move between urban centres using coins such as Dublin and York, coin-producing Anglo-Saxon burh market towns such as Chester, or rural beach markets using bullion as might be found in Viking Scotland.

The world to Scotland 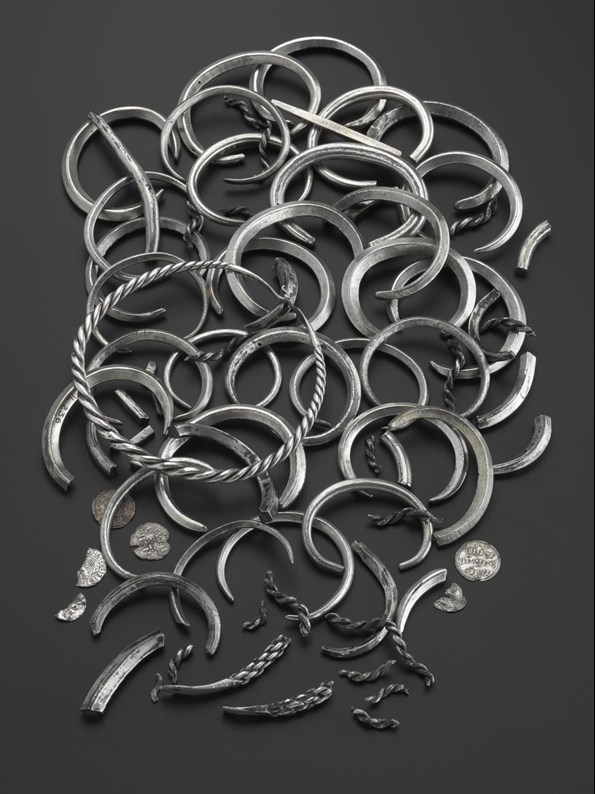 The Burray Hoard, Orkney, deposited 997 - 1010 AD, showing the kind of items made from silver coins and ingots.

These coins show the broadened frontiers of the known world in Scotland at the turn of the first millennium. The dirhams were the raw material from which iconic 10thcentury objects like the Skaill thistle brooches and the Burray arm-rings were crafted. Even though we call these ‘Viking’ hoards, by this point silver would have been obtained not just by a slash-and-burn raid, but as agreed payment for mercenaries, or trade between diverse and multilingual communities. It shows how places like Skye would have been newly central to networks which spanned the known world.