The right to vote: franchise reform in 19th century Scotland

Though its outcomes may at times frustrate us, the right of all citizens to engage on equal footing with the British electoral system was hard-won. For most of the 19th century, the extension of the 'franchise' (the category of people who are able to vote) was a dominant political issue. The struggle for these rights is represented in a number of household and personal objects in our collections, which inform our understanding of modern Scottish political developments.

The rules which dictated who could vote differed between constituencies. In 1830, only around 2.66% of people in Britain were enfranchised. In Scotland, the franchise was even more restricted. Out of a population of around 2.3 million, fewer than 4,500 people, or about 0.19% could vote. On top of this, the processes for voting meant that elections were easily influenced and corruption was rife.

Throughout the century, various political groups and individuals known as ‘radicals’ attempted to reform the electoral system to be more equitable. However, their efforts were almost always focused on men's suffrage. Arguments for women's suffrage were sometimes considered within these wider movements, but ultimately dismissed.

The period following the Napoleonic Wars saw the emergence of a number of mass movements for parliamentary reform in Britain. In 1819, unarmed radicals in Manchester were massacred by the local yeomanry during a large outdoor meeting on St. Peter’s Fields, an infamous event which became known as the Peterloo Massacre, or simply ‘Peterloo’. In 1820, Scotland saw a week of radical unrest, during which radicals from Glasgow and Strathaven armed themselves and fought unsuccessfully with government troops. This uprising became known as the Radical War. 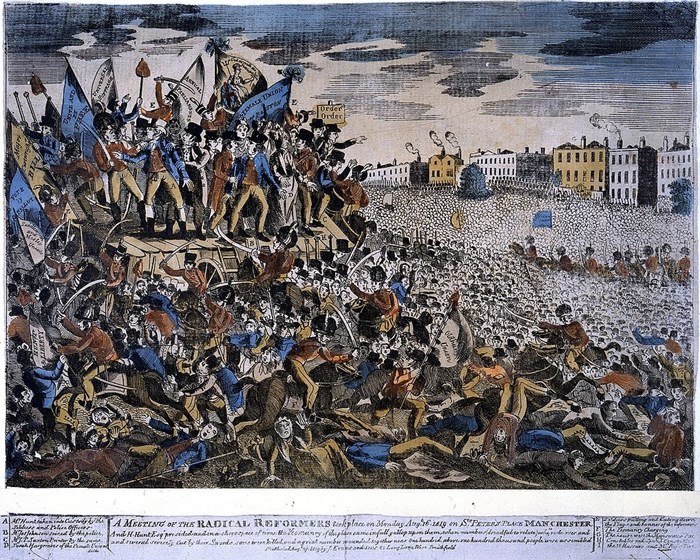 After Peterloo, the government sought to prevent any unrest stemming from the radicals by implementing the Six Acts, attempting to effectively make public radicalism illegal. In response, radicals were often forced to be clandestine when expressing their political beliefs. It is possibly because of this secrecy that the National Museum of Scotland has no overtly pro-reform items from the period.

However, many radicals threw their weight behind king George IV’s spurned wife, Queen Caroline, as a means of legally criticising the state. The museum does have a good selection of objects which celebrated or commemorated the Queen consort’s struggle to be recognised. These tend to be homeware, reflecting her contemporary status as a symbol of domesticity.

Queen Caroline: a figurehead for reform

This plate is embossed with a portrait of Queen Caroline, drawing the viewer into her personal struggle. The crowns and national feathers which border the plate emphasise the legitimacy of her claim to the throne. Though rife with radical undertones, Caroline also had many non-radical supporters and the ownership of such a plate was not automatically an indicator of radicalism.

Through items like these, radicals with a desire for legality could reinforce their political beliefs within the relative security of the home. The domestic nature of Caroline’s struggle meant that they could also promote fidelity within their own marriage. Learn more about how Queen Caroline became a symbol of the reform movement in our blog.

Queen Caroline's personal struggles in parliament were also commemorated. The jug below commemorates Caroline’s defenders in the House of Lords, Brougham and Denman. Wear at the front of the jug implies that it saw use and was not just decorative. 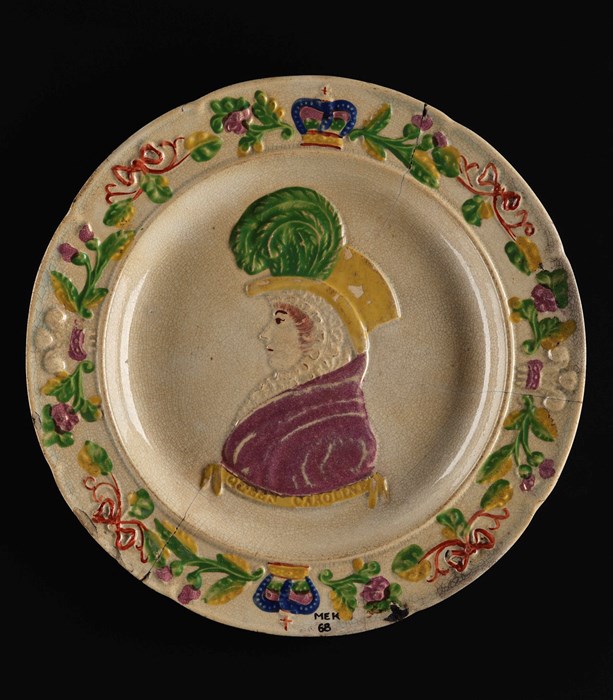 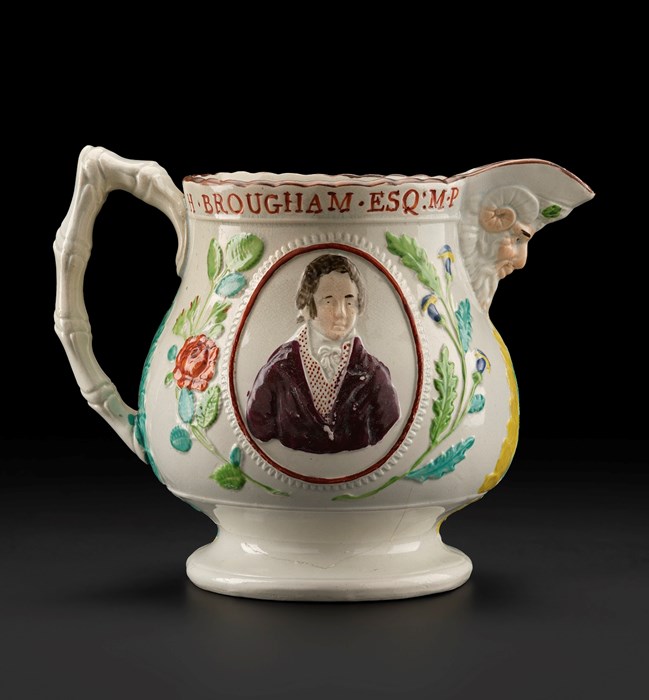 By the 1830s, radicals were again willing and able to advocate openly for reform. The growing economic and social influence of the unenfranchised middle classes, along with a growing acceptance of the necessity for some level of reform amongst politicians, meant that agitations across Britain eventually led to the 1832 Representation of the People Act.

The ‘Great Reform Act’ created fairer constituency boundaries and extended the franchise to middle-class men. Though its scope was limited, its impact was significant in Scotland, increasing the electorate from 4,500 to 65,000, or approximately 2.8% of the total population. Although its limitations later became more apparent, it was broadly popular at the time and left a range of materials in its wake. Many of these are also pieces of commemorative homeware, such as this plate, which again brought radicalism into the domestic environment. 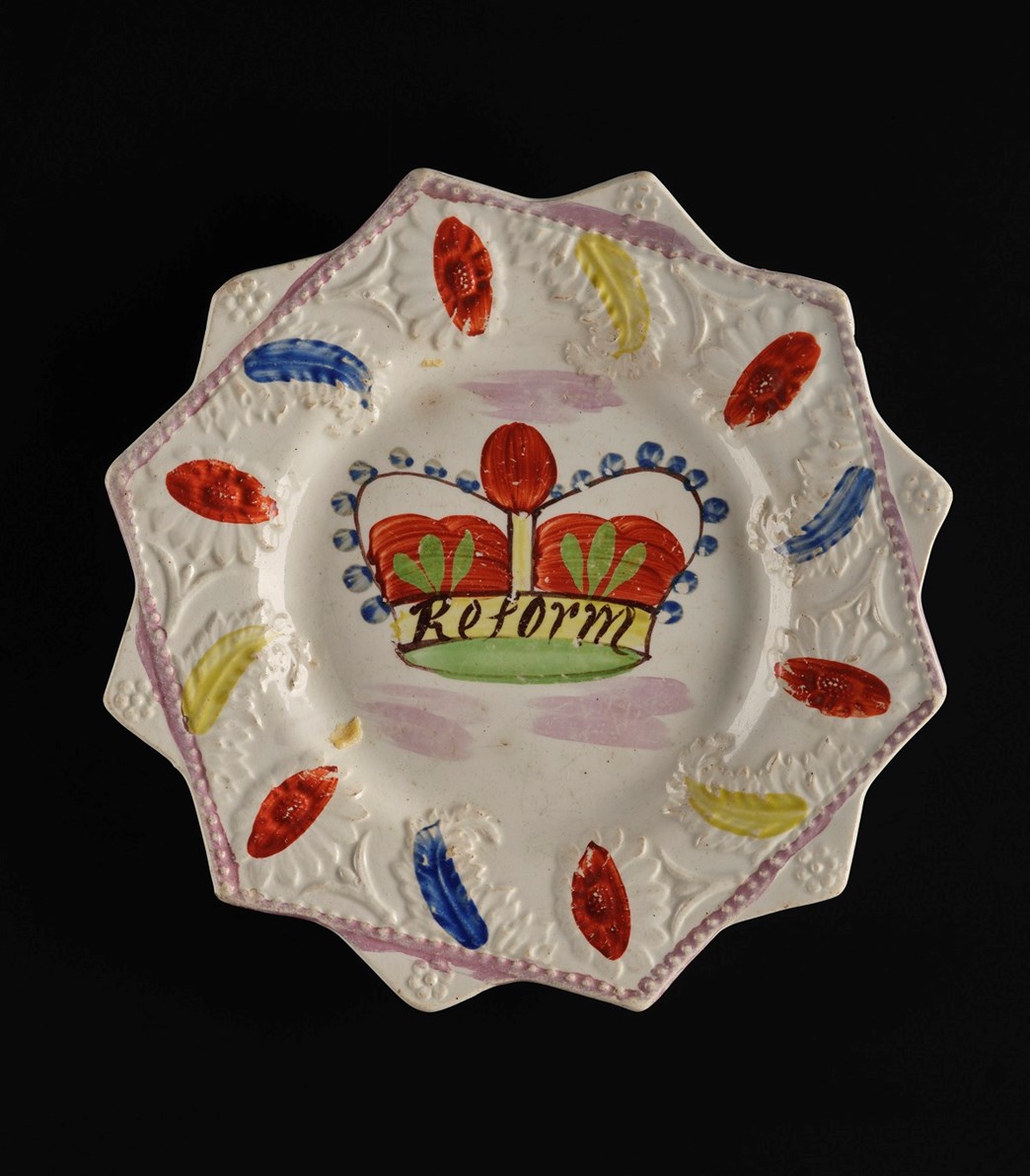 The use of the crown design on this plate is indicative of the belief among radicals that reform was a constitutional endeavour. Such royal imagery is common in these objects. One set of metal fireside ornaments from the era show a king leaning against an obelisk which reads, “BILL OF RIGHTS. MAGNA CHARTA.”, drawing franchise reform into a lineage of constitutional law-making. 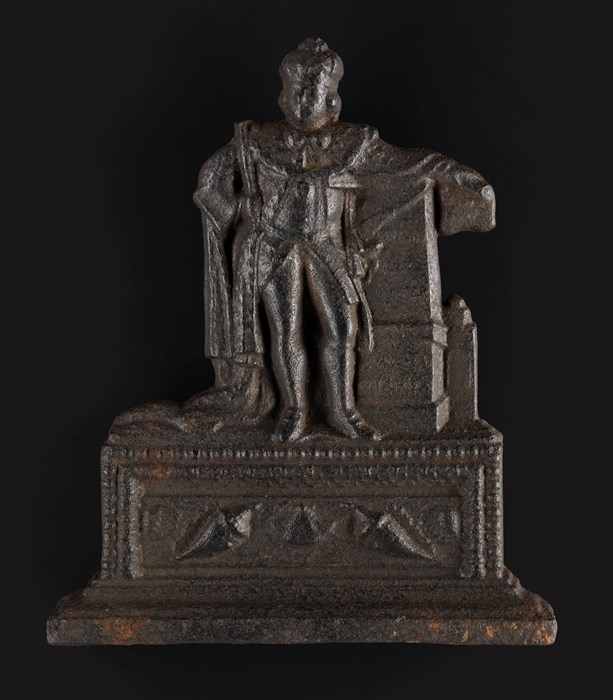 Front of the fireside ornament. H.SD 75 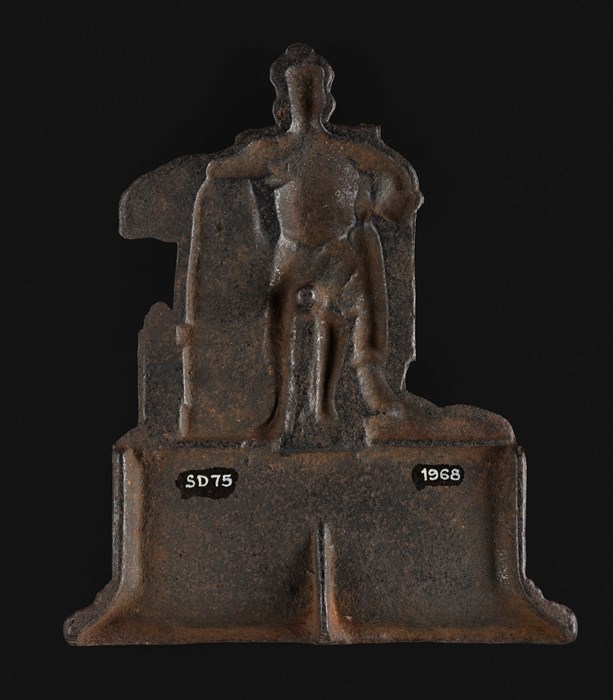 Reverse of the fireside ornament. H.SD 75

One novel means of agitation during the struggle for the First Act were organised, formal processions of the trades, who gathered together en masse to demand reform as well as to celebrate its passing. These marches were loud, fun, communal affairs which saw the trades of a city and its surrounding areas parade with a variety of materials to identify themselves as workers and as radicals.

One set of such materials held by National Museums Scotland belonged to the Edinburgh Goldsmiths. As well as a banner, a gonfalon, and a carved wooden panel, the museum has possession of these ceremonial batons, below, which were carried on a march to mark the passing of the act in August 1832.

Ceremonial marching items were used by trade contingents to mark themselves out from those around them and to show the pride they held in their professions. They tended to be valued by contemporaries for their historical importance, and were often carried by successive generations of reformers to prove the radical lineage of their trades. 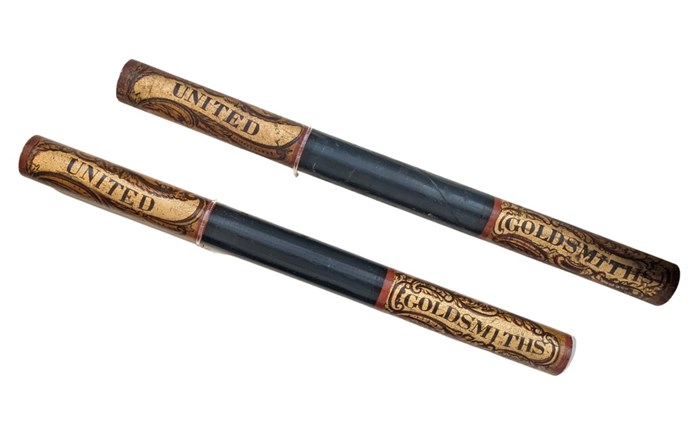 However, many working-class radicals felt that the First Reform Act had not gone far enough. This conviction was laid out in the demands of The People’s Charter, launched in Glasgow by the London Working Men’s Association in 1838. The Chartist Movement aimed for the realisation of six key demands: universal men's suffrage; a secret ballot; a fairer distribution of seats; payment for MPs; a removal of property qualification for MPs; and annual parliaments.

The Chartists presented three large petitions to parliament in 1839, 1842, and 1848, but their support petered out in the 1850s. Sadly, there are no materials from the Chartist movement in the museum’s collections.

This is not because such items did not exist. There were certainly Chartist processions which made use of similar marching materials to those in 1832, and there are mentions of Chartist homeware and clothing being given as gifts to visiting speakers.

The absence of these objects in the museum may be because the Chartists were unpopular with the middle and upper classes, who tended to throw their weight behind other contemporary political movements, such as the Anti-Corn Law League. 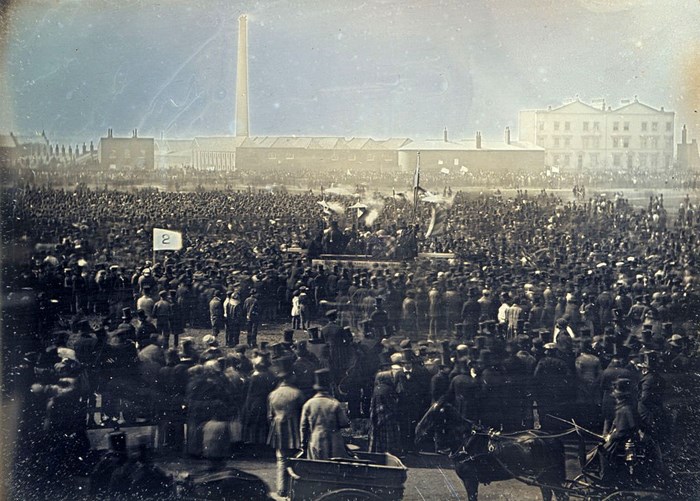 As a result, antiquarians and those in charge of collecting may not have viewed the movement’s objects favourably. Similarly, manufacturers may not have been willing to court controversy by mass-producing Chartist items to be sold commercially. Altogether, these factors may contribute to the lack of extant Chartist items as compared to other social and political movements of the century.

Many involved in Chartism then went on to agitate for less sweeping franchise reforms in the 1860s, which eventually led to the 1867 Reform Act. The 1867 Act further widened the franchise, giving the vote to urban householders and lodgers who paid rent of at least £10 per year, thereby enfranchising much of the urban working class.

Incremental reforms to the electoral system followed, such as the implementation of the secret ballot in 1872. In 1884, William Gladstone’s Liberal government passed the Third Reform Act, which extended these same reforms to the countryside.

The objects produced during the reform movements of the 1860s and 1880s tended to focus less on the commemoration of ideas and more on the commemoration of leaders. In particular, John Bright and William Gladstone were frequent subjects for materials of the period. Both appear on this jug, where they are framed by laurel wreaths. Once again, reform was not far from domestic life. 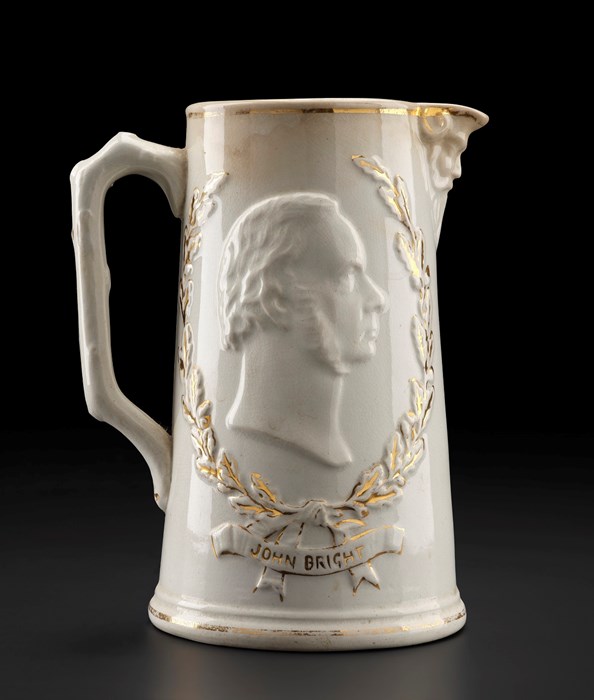 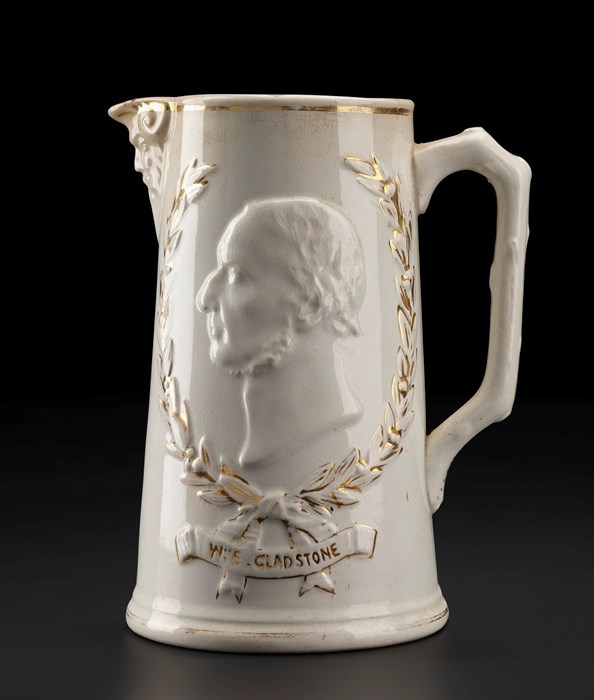 Both Bright and Gladstone also appear separately on political medallions, such as the one below which commemorates an 1866 march for reform in Edinburgh.

Medals like this were purchased by supporters of reform, then drilled and worn on ribbons. By wearing such medals at political marches, radicals marked themselves out as a member of the community, whether or not they were part of the procession. As well as being sold, medals were sometimes distributed by the marchers to the audience, further bridging the gap between the two and reinforcing a radical community beyond the boundaries of the trades. 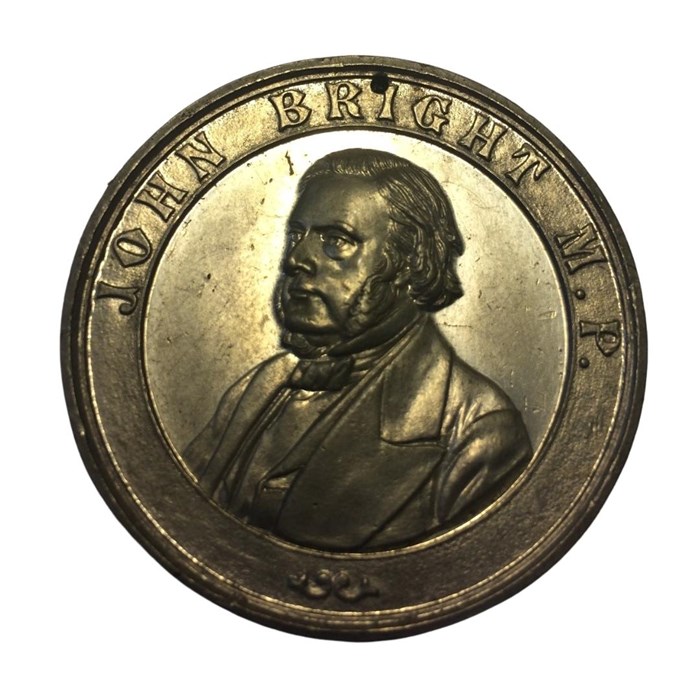 Where the ribbons survive, such as on an 1884 medal featuring Gladstone, their orientation suggests that their wearers prioritised commemoration of events over the celebrations of leaders. 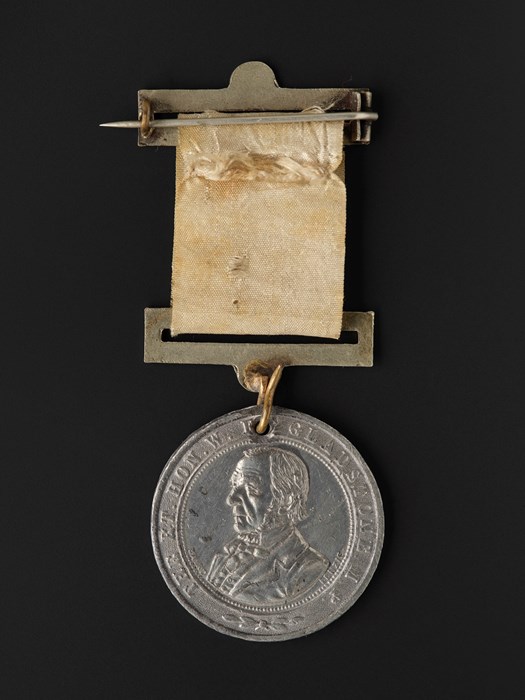 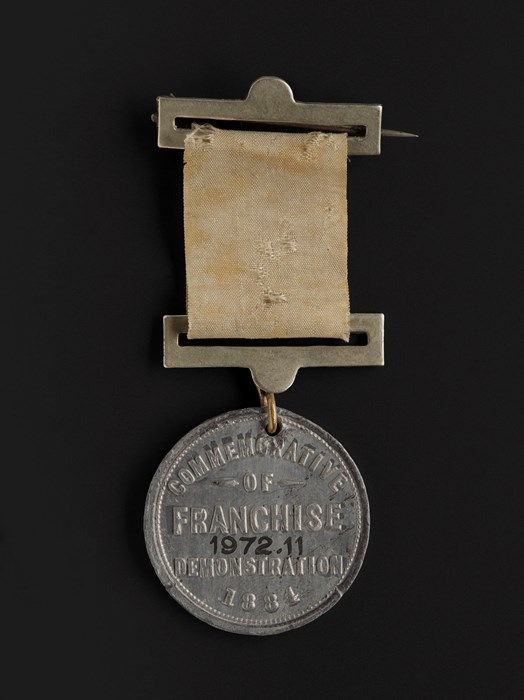 Medallion with surviving ribbon from 1884, commemorating a franchise demonstration. H.1972.11

Gladstone remained a figure of commemoration long after the passage of the Third Act, being the subject of such wide-ranging items as doorknobs, statuettes, and plates. Not only was the man himself commemorated, his marriage is also referenced in a large decorative piece from 1889.

This large, weighty medallion shows Mr and Mrs Gladstone together on one side, while on the other their union is commemorated with an ouroboros surrounding a pair of clasped hands. 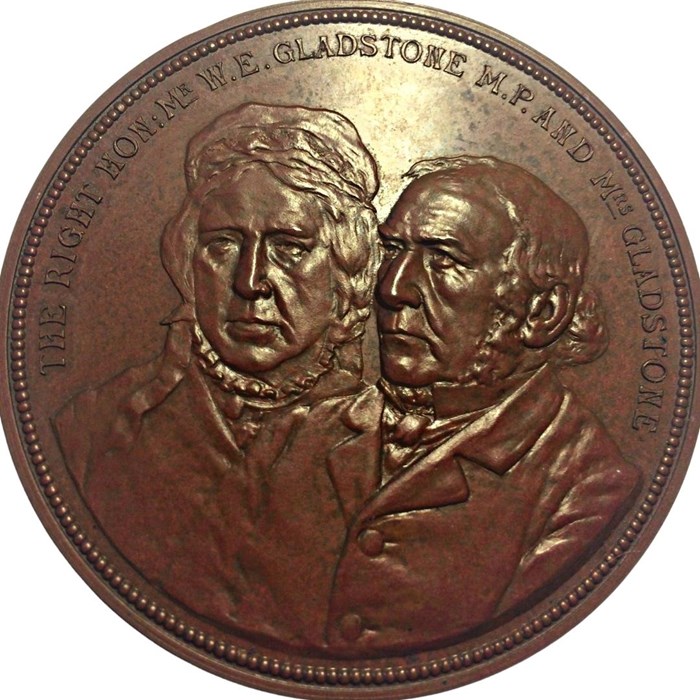 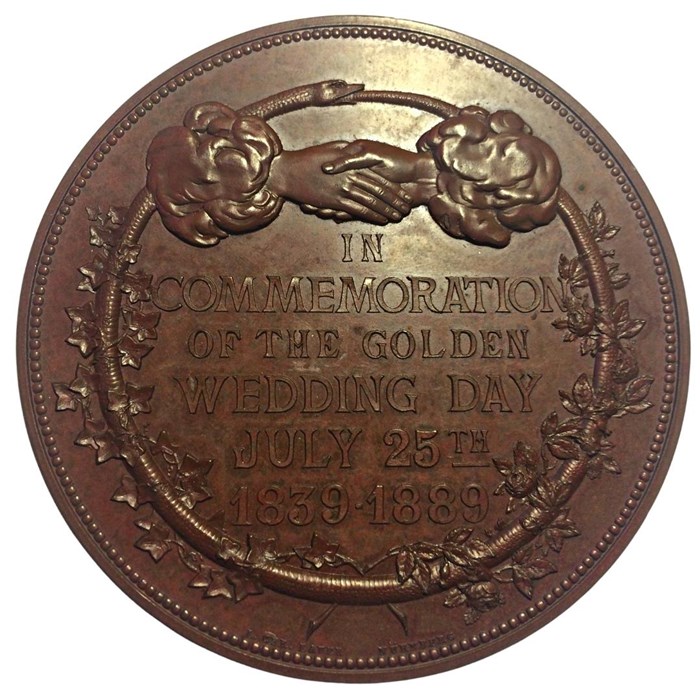 Reverse of the 1889 medallion commemorating the marriage of Mrs and Mr Gladstone. H.1974.10

Gladstone’s death was also the subject of commemoration. The handkerchief below was made to memorialise the ‘Grand Old Man’. It references the various constituencies he represented, and places his portrait above one of his widow. 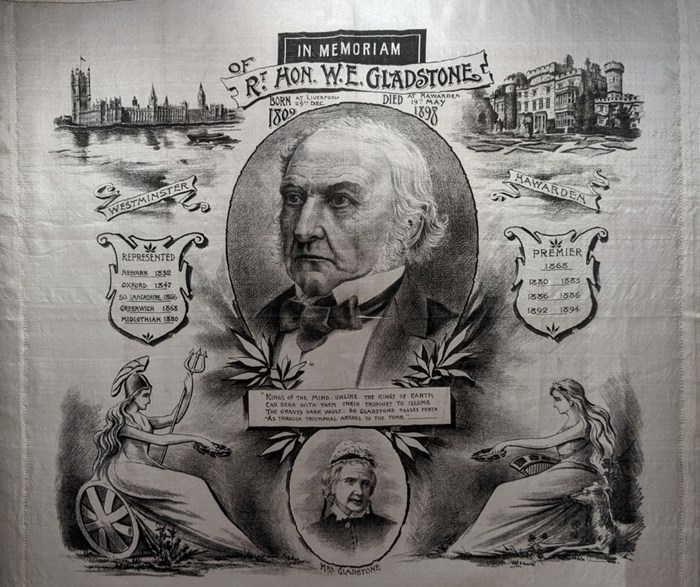 Handkerchief commemorating William Gladstone, with Mrs Gladstone in a frame below. H.TS 15

Through an exploration of these objects, we may piece together insights into the intersection of the personal and political identities of 19th century radicals. The consistent use of homeware implies that radicals were keen to include references to their political identity in their construction of a domestic environment. The centrality of marriage within Gladstone objects from the end of the century and Caroline objects from its beginning indicate that the link between politics and the domestic environment was a strong one.

Radicalism was also a public affair, meant to be displayed proudly in banners, marching materials, and medals. These items were closely tied to work-based identities, tying radicalism to the ownership of labour. They also, however, ensured that radicalism was not only the preserve of ‘the trades’ through the sale and distribution of medals.

These objects are small windows into the lives of their original users and suggest to us that the idea of every man voting was a deeply personal one. Despite this strong belief in democracy, the 19th century did not see the franchise extended to all men, nor to women. 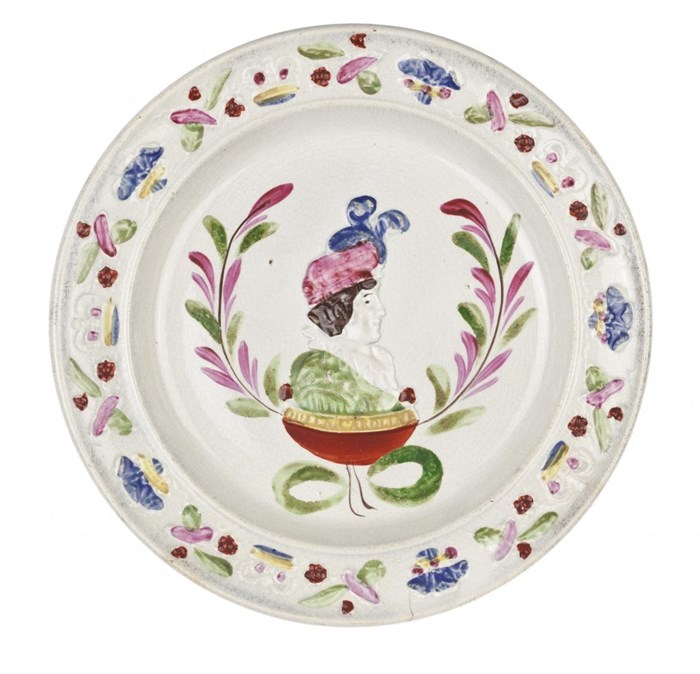 An earthenware plate with a moulded relief of Caroline at it center, bordered with Crowns and Prince of Wales feathers. West Pans, c. 1820. H.1993.7

Sonny Angus recently completed his PhD at the University of Edinburgh. This page is a result of his Collaborative Doctoral Partnership with National Museums Scotland, during which he studied the material culture of reform movements.