The Thin Red Line is one of the best known of all Scottish historical paintings and is the classic representation of Highland military heroism as an icon of Scotland.

Robert Gibb painted The Thin Red Line 25 years after the incident it depicts, inspired by Alexander Kinglake’s book The Invasion of the Crimea.

Robert Gibb’s celebrated painting depicts the 93rd Highlanders halting a Russian cavalry charge at the Battle of Balaclava during the Crimean War in 1854. Painted over twenty-five years after this famous incident took place, the composition was inspired by Gibb’s reading of Alexander Kinglake’s book The Invasion of the Crimea, which was published in eight volumes between 1863 and 1887, and a scene which came to the artist as he walked along a hillside in the Peak district.

Above: The Thin Red Line painted by Robert Gibb.

What was 'The Thin Red Line'?

In 1853, France and Britain allied with Turkey to resist Russian pressure to secure strategic naval access to the Mediterranean from the Black Sea. The Allies repulsed Russia's attempt to invade the Balkans, then fought to occupy the Crimea and neutralise the Russian naval base at Sebastopol.

The Battle of Balaclava took place on 25 October 1854, when the Russian army tried to get between British forces besieging Sebastopol and the British supply base at Balaclava. The battle is best known for the disastrous Charge of the Light Brigade, but also for the incident which became known as 'The Thin Red Line', when a single Scottish Highland regiment, the 93rd Highlanders, drawn up in a long line, remarkably halted a Russian cavalry charge.

The 93rd had been left alone to defend Balaclava after Turkish forces and Marine artillery had withdrawn. Four Russian cavalry squadrons, numbering around 400 men, advanced on some 500-600 Highlanders. At this time, infantry were not thought to be able to withstand cavalry in the open, and would, given the chance, fire then form defensive squares. On this occasion, the regiment deployed in line and fired three volleys, which inflicted terrible damage on the Russians, who halted and withdrew.

An act of courage, nerve, and military discipline undoubtedly, but also explained by a development in military technology: the 93rd was one of the few regiments in the Crimea which had been issued and trained with the new pattern 1851 service rifle, which boasted improved accuracy, range and rate of fire. 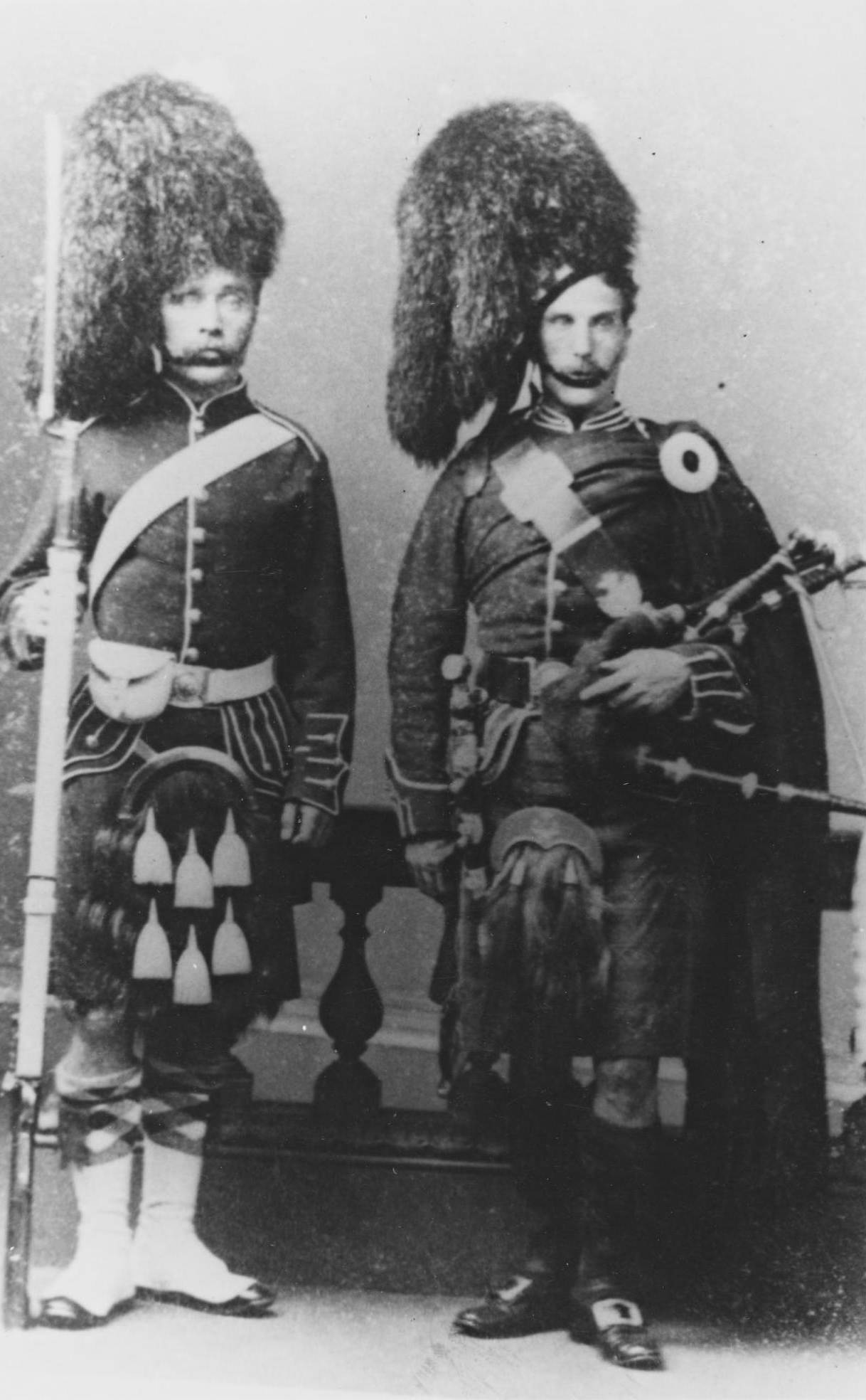 Above: Photograph of a private and a piper, 93rd Highlanders, c. 1865 in the collection at National War Museum.

“
...a thin red streak topped with a line of steel...
- William Russell, despatch to The Times

The phrase 'The Thin Red Line' is in fact a misquote. Eyewitness war correspondent William Russell wrote in his despatch for The Times of 'a thin red streak topped with a line of steel', but in later accounts he used the 'Thin Red Line' phrase, which stuck in the public consciousness. The phrase remains in wide use today, often used colloquially to mean infantry (as in Terence Malik’s 1999 film about US infantry in the Pacific in 1942) or any thinly-stretched group resisting greater forces, including – as 'the Thin Blue Line' – the police.

Why is the painting important?

With The Thin Red Line, Robert Gibb not only immortalised a brilliant feat of courage and military efficiency, he captured the essence of the Scottish military tradition at the height of the Victorian era. Scotland in 1854, and in 1881 when Gibb painted the picture, strongly identified with its soldiers, and with Highlanders in particular as symbols of Scottish historic nationhood, and of national contribution to the power of the British empire. This idea originated in the late 18th century and very early 19th century, when British military success against Napoleonic France combined with the craze for the Highlands occasioned by the European Romantic movement, seizing on the distinctively dressed Scottish Highlander as a heroic figure.

The Crimean War was controversial: the newspaper-reading public were appalled by accounts of the conditions endured and mistakes made, and shortly afterwards the shock of the Indian Mutiny of 1857 further rocked public confidence in the imperial project. In both of these wars, the conspicuous successes of the Scottish Highland regiments of the British Army were rare and comforting good news stories.

Who was Robert Gibb?

Scottish artist Gibb (1845-1932) was born in Lauriston near Falkirk. A historical genre and portrait painter, he is best known for his military pictures. Following up his success with The Thin Red Line, Gibb painted two further well-known Crimean War battle pictures, as well as other military historical paintings. He became Keeper of the National Gallery of Scotland from 1895 to 1907, during which time he painted his last major battle painting Hougoumont, a depiction of an incident at the Battle of Waterloo, which is also displayed at the National War Museum. 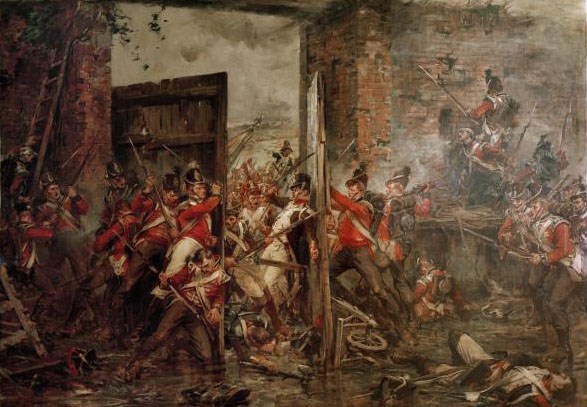 Above: Closing the Gates at Hougoumont, by Robert Gibb. This picture shows a turning point during the Battle of Waterloo in 1815, when around 30 French soldiers forced the north gate and entered into the grounds of chateau of Hougoumont.

How did the painting come into the collection?

The dramatic painting created a sensation with the public when first displayed by the artist at the Royal Scottish Academy in 1881.

It was bought by a collector, the music entrepreneur Archibald Ramsden of Leeds, and, following Ramsden’s death in 1916, was bought at auction at Christies by Sir Thomas Dewar, one of the two brothers behind the international success of Dewar’s whisky. It was through this whisky industry connection that the picture has been on long-term loan to us since 2000 from Diageo. 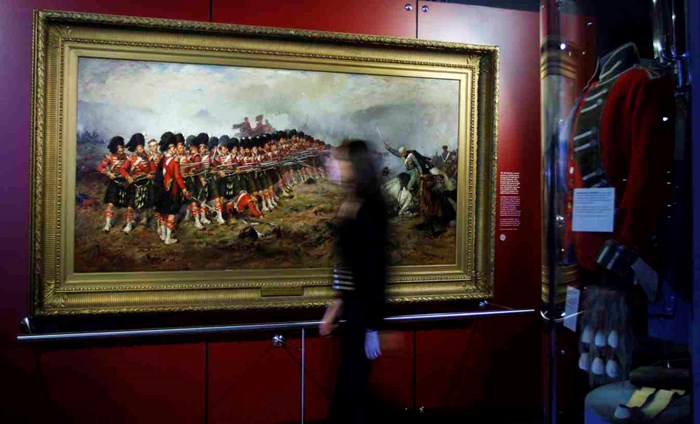 Above: The Thin Red Line on display in the National War Museum.

Now generously donated to National Museums Scotland by Diageo, The Thin Red Line remains on display as one of the highlights of the National War Museum. It is the centrepiece there of the Highland Soldier gallery, which explores how the military reputation of the Highland regiments came to symbolise Scotland.