You are here Home > About us > Press office > First Major Exhibition on Scottish Pop Music Opens in Edinburgh
Thursday 21 June, 2018

Rip It Up: The Story of Scottish Pop
22 June to 25 November 2018
National Museum of Scotland, Chambers Street, Edinburgh

This summer the National Museum of Scotland presents Rip it Up: The Story of Scottish Pop, the first major exhibition dedicated to Scottish pop music, exploring the musical culture of the nation over more than half a century, from influential indie pioneers to global superstars.

Rip It Up puts music in the spotlight, featuring archive footage and new interviews with artists and musicians along with iconic costumes, memorabilia, instruments and props from musicians including The Proclaimers, Shirley Manson, Lulu, Midge Ure, Simple Minds, Annie Lennox, Gerry Rafferty, Alex Harvey, Texas, Franz Ferdinand, Young Fathers and more. The majority of the 300 objects on display are being lent to the exhibition by the artists themselves and in many cases have never before been on public display.

The exhibition is being produced in partnership with BBC Scotland, and a three-part TV series will bring another dimension to the story through the voices of those who made the music, those who witnessed it from behind the scenes, and the fans who lived for it. A new book complements the exhibition, written by writer, broadcaster and DJ, Vic Galloway, who presents a four-part series on the topic for BBC Radio Scotland.

The exhibition takes visitors through the early beginnings of the music scene, exploring the roots of Scottish popular music, through the dawn of skiffle and the emergence of Lonnie Donegan against the backdrop of cafes and dancehalls, the overlap with Scottish folk and traditional music and the formation of the popular music industry, where artists would head to London in search of the all-important record deal. Highlights include a custom trouser suit made for Lulu, Alex Harvey’s cane and famous striped jumper and a guitar painted for Gerry Rafferty by his friend, the artist John Byrne.

Delving into punk and new wave, the exhibition traces the influential role of record labels such as Postcard, Creation and Fast Product, through costume, instruments and artwork relating to Josef K, Orange Juice and the Fire Engines, among others. This was also the time of the Rezillos (highlighted by the green jumpsuit worn on Top of the Pops by Eugene Reynolds), Altered Images (loans from Clare Grogan include a dress made for their 1982 US tour), The Skids (handwritten lyrics and a guitar bought for Richard Jobson in Woolworths by Stuart Adamson, later of Big Country, who also feature later in the exhibition), and The Associates (a master tape from December 1980 and a beret worn by Billy McKenzie). The exhibition features remarkable photographs of many of these artists taken by Glasgow’s Harry Papadopulous, who was a staff photographer for Sounds magazine. Foundations were laid for the likes of Primal Scream, Teenage Fanclub, BMX Bandits and the Jesus and Mary Chain, who also feature.

Arguably the biggest Scottish act to emerge from the post punk period was Simple Minds, from whom there are two decorated acoustic guitars and a very early gig poster. They will be among artists showcased in the ‘going global’ section of the exhibition alongside many other artists with a notable international impact, ranging from Average White Band and The Bay City Rollers to Midge Ure, Franz Ferdinand, Annie Lennox, Biffy Clyro, Shirley Manson, Texas and Paulo Nutini. Treasures here range in size and scope from Shirley Manson’s bright orange jacket worn on the poster for Garbage’s 1998 release of Version 2.0 to the robot stage props from Franz Ferdinand’s 2006 world tour, the guitar set on fire by Biffy Clyro at the Reading Festival, the tartan trouser suit designed by Annie Lennox and made by Jeff Banks which she wore during the Eurythmics Touch tour (1983-4), and the photograph of the Average White Band jamming onstage in the USA with Marvin Gaye.

Bands including The Proclaimers, Capercaillie and Runrig will also feature, as the exhibition explores artists who have made a point of emphasising their Scottish language or identity in their work. Within that, particular parts of Scotland have at different times been notable hubs of musical creativity, most obviously Glasgow, and also Fife with the Beta Band and the Fence Collective.

To conclude the show, an audio-visual installation recreates a live concert environment with a hand-picked selection from Scotland’s rich back catalogue.

“Popular music is a shared experience, and a really important one in many people’s lives. We want the exhibition to capture people’s imagination and allow them to reflect on their own experiences of listening to and enjoying music. Between the objects, the AV and the music, people will be able to learn more about their favourite artists and see their treasured objects up close, but also to discover music that is new to them in a whistlestop tour of over six decades of Scottish pop.”

“I’m exceedingly grateful to the National Museum of Scotland for envisioning the idea for Rip it Up and in doing so, recognising the depth and influence of Scottish artists and their music. Scotland has long deserved an examination of its rich musical heritage, the effects of which can be heard all over our globe today.

“While music is universal, and Garbage are an international band, being Scottish is a large part of who I am and has had a huge bearing on my work and our career.  I’m honoured to be included in the exhibition alongside my peers and many of the artists who influenced and moulded my own musical identity. I must admit that I’m actually very much looking forward to seeing the exhibition myself.”

"The Rip It Up:- The Story of Scottish Pop exhibition is a real triumph and shows off Scotland's major role in the 20th and 21st Century's most inspiring, influential and popular artform. From Lonnie Donegan and Alex Harvey in the 1950's to Young Fathers and Calvin Harris today, via the huge successes of the 70's, 80's and 90's, it's a roller-coaster ride of sound and vision. Hats off to Stephen Allen and his team. It's been an honour to write the official book in association with the museum, and to present the accompanying radio series for the BBC. I hope local and international visitors alike dig in and enjoy this celebration as I have."

During the run of Rip It Up, a programme of musical events will allow audiences to participate in and experience Scottish pop music first hand through live performances, talks and discussions hosted at the National Museum of Scotland. Additionally, associated programming is included as part of the Southern Exposure festival at Summerhall and during the Edinburgh International Festival as well as new Edinburgh music walking tours. There is also a compilation CD to accompany the exhibition.

Both the exhibition and the National Museums Scotland programme of events are sponsored by Baillie Gifford Investment Managers.

“We are delighted to be continuing our association with National Museums Scotland by supporting Rip it Up. This exhibition features objects from such a wide range of Scottish musicians that it is sure to appeal to all ages, from those who can remember dancehall and ballroom culture in the 50s and 60s to fans of Young Fathers”

Further information on exhibition and images from:

Exhibition
Rip It Up
The Story of Scottish Pop

Discover the story of Scottish pop music at the National Museum of Scotland as we take you on a musical journey from the 1950s to the present day.
More 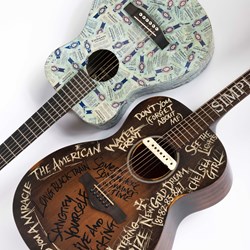