You are here Home > Collections and research > Our research > Past research projects > Democratising knowledge: Chambers's Encyclopaedia > Printing methods > The wood engraving profession
From the professionalisation of wood engraving during the first half of the 19th century, the trade had virtually disappeared by the beginning of the 20th century.

Much has been written about pioneer wood engraver Thomas Bewick (1753-1828) and his well-known former pupils such as William Harvey (1796-1866), John Jackson (1801-1848), and John Anderson (1775-1808), who travelled from Newcastle to London, Paris, Berlin and North America, establishing wood engraving as a highly skilled profession. However, the wood engravers of the generation following them worked increasingly for illustrated newspapers and magazines with uncompromising publication dates.

In the early decades of the 19th century, wood engraving was considered a good and stable profession. The price of illustrations was high and a good living could be made.  Apprenticeships typically lasted seven years, teaching young men the methods of Thomas Bewick and his former pupils. After completing an apprenticeship, engravers served for many years as journeymen, with the expectation of eventually achieving master engraver status. According to illustrator Randolph Caldecott:

Due to the new markets driven by the growing illustrated newspaper and periodical businesses in the mid-19th century, there was such a great demand for wood engravers that apprenticeships decreased from seven years to five, then down to three or two years. Finally, on-the-job training was provided at firms needing illustrators and wood engravers to keep up with the work. The Graphic periodical established its own school specifically to train wood engravers. Outsourcing blocks to freelancers was common practice by the middle of the century. Publishers relied on wood engraving firms to supply engraved blocks at a more rapid pace than engravers of the past, which inevitably affected working conditions.

While there are some exceptions, it seems that by the mid-century, the traditional journey from apprenticeship to master engraver was reduced to that of freelance jobbing engraver working to the demands of a wood engraving firm foreman. Many successful firms, like the Dalziel Brothers or J. & R. M. Woods, established and managed by master engravers, considered wood-engraving offices less as places to learn traditional craft skills, but as assembly-line workshops to finish blocks to tight deadlines. 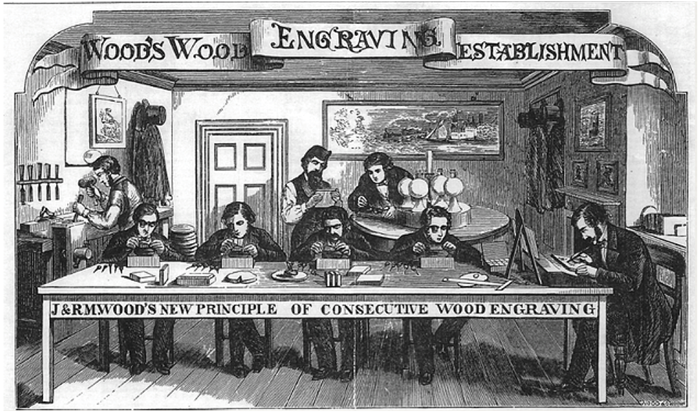 Where once a master wood engraver was skilled in all aspects of the trade, from the 1870s onward apprentices might only be trained in specific types of engraving. Those who specialised in botanical illustrations were known as pruners. Others specialising in animals or the human form were called butchers; specialists in clothing and drapery were tailors and experts in machinery were mechanics.

Larger images, for frontispieces or header and main stories, were drawn across several woodblocks that when joined would create a large printing surface. 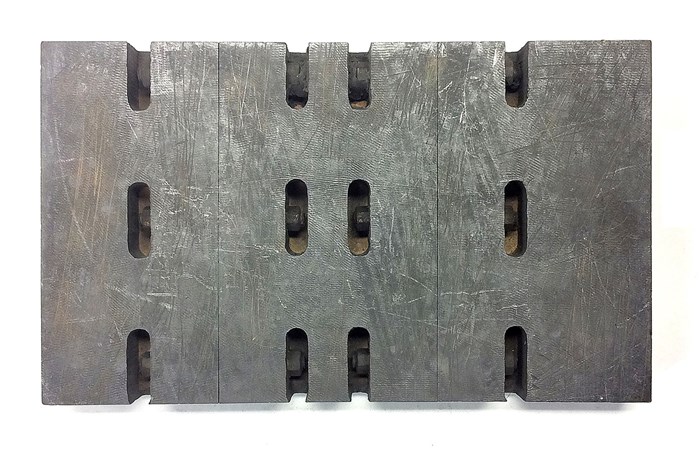 Above: Underside of three blocks joined with bolts. Photo by Rob Banham.

A master engraver would engrave across the joins to establish the overall image. The large block was then dispersed to be engraved in individual segments, then the whole glued together or bolted in the case of larger blocks. 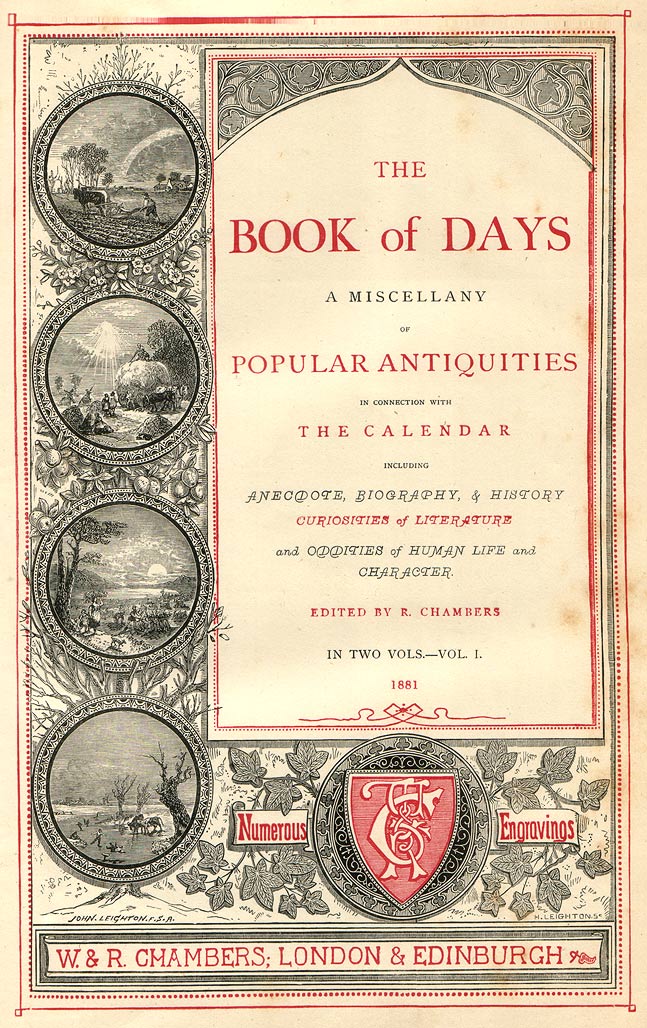 Jobbing wood engravers were not acknowledged on their work. Very rarely are any of the encyclopedia images marked with initials or a name. Credited illustrations were by recognised illustrators or painters. This can be seen in one of the Chambers firm's more elaborate publications, The Book of Days, published during the production of the first edition of their Encyclopaedia, in 1864. Presented in the form of an almanac, the frontispiece and the entry for each month is headed by an elaborate engraving, with the artist identified by name as John Leighton. By contrast, the engraver remains anonymous. Illustrations elsewhere in this publication are unusual in the Chambers output for bearing the initials of the engravers. Many of the blocks for The Book of Days have been commissioned from the eminent London company, the Dalziel Brothers, identified by the blocks which bear their company name rather than that of the individual engraver. 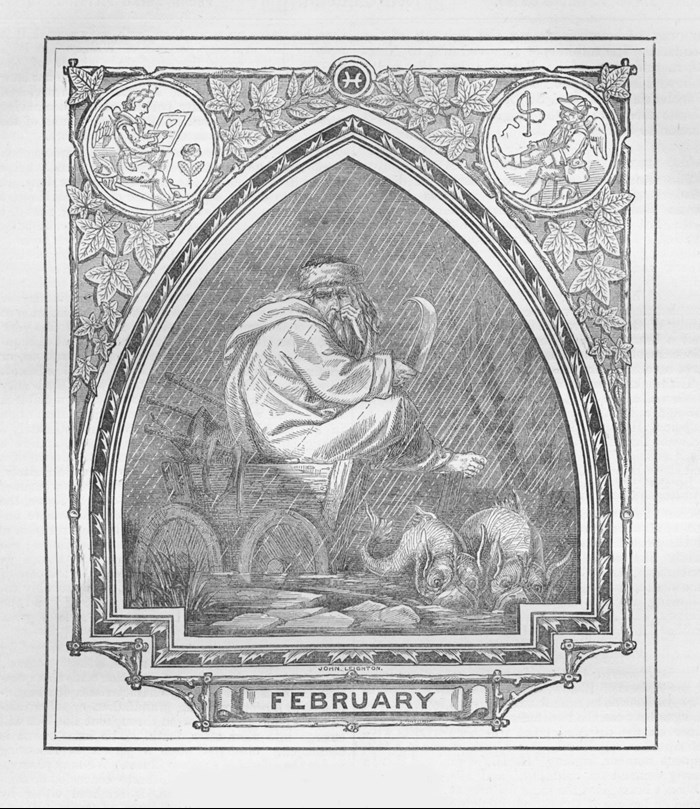 Above: The Book of Days February heading, 1864.

A rare exception to this can be found in Chambers's Miscellany of Useful and Entertaining Tracts on 'Wood-engraving' published in 1845, where one individual's contribution is highlighted:

"It is but justice to mention that the greater number of our wood-cuts have latterly been the production of Mr John Adam, a rising and almost self-taught artist, a native of Arbroath, who has been several years in our employment."

There is no further detail on which images were engraved by him, but the mention of his name here might signify he is the engraver responsible for the illustrations in this tract, amongst many others. It is tempting to read the illustration on the wood engraving process as his own hands at work. 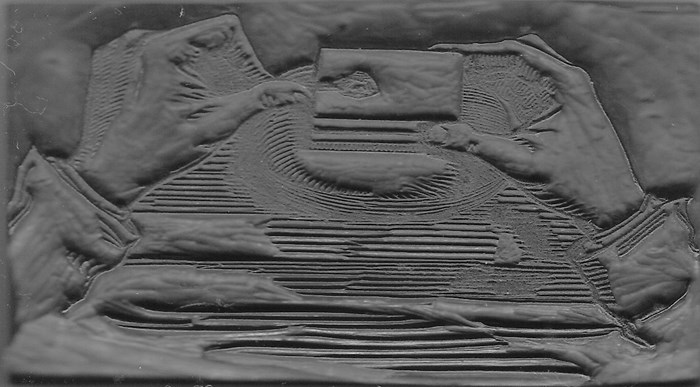 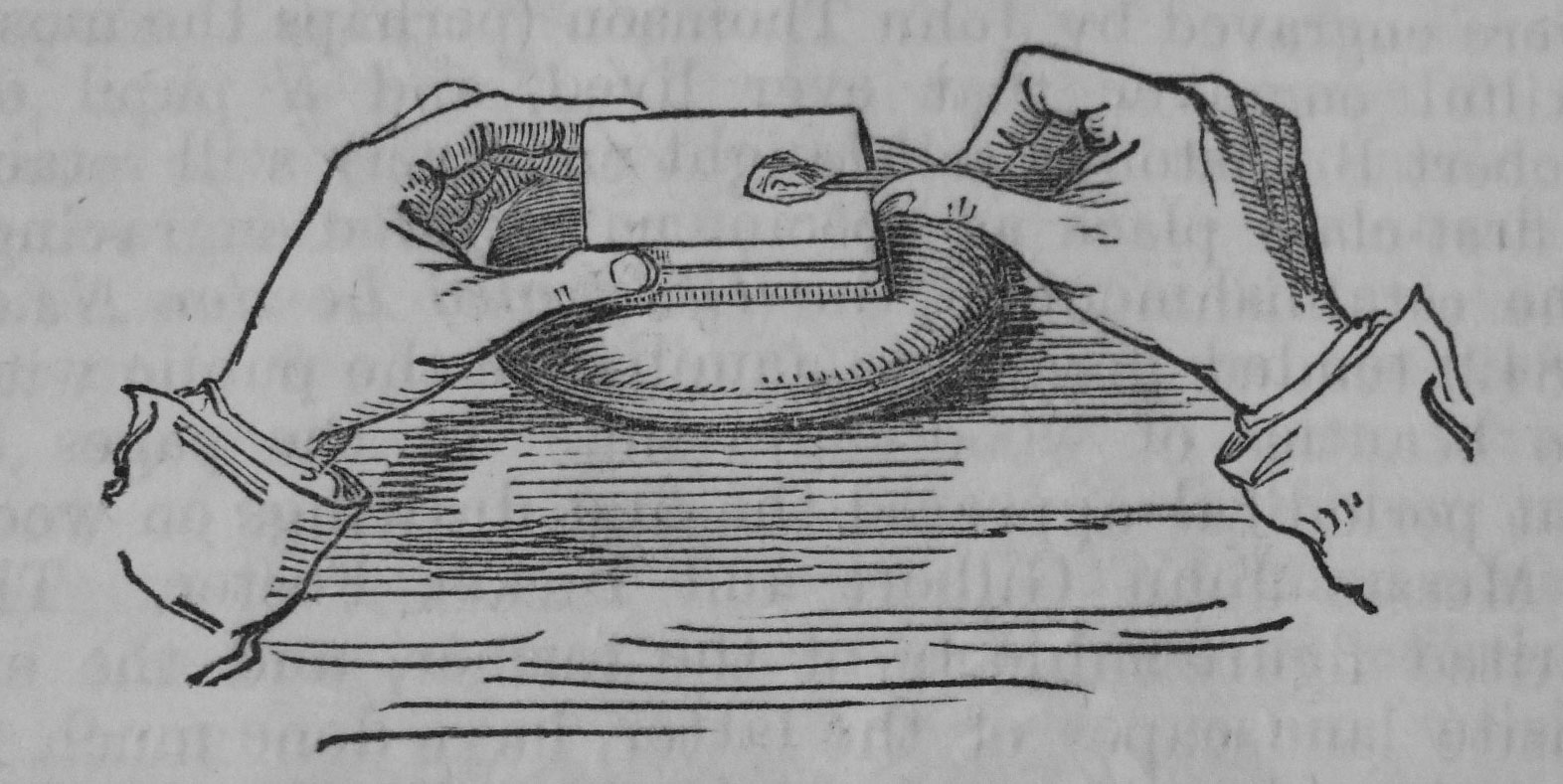 From the mid-century, a divide emerged between anonymised wood engravers whose work for periodicals, catalogues or technical manuals was increasingly considered 'mechanical’ and those whose work illustrated poetry, literature or art and whose style was described as 'pictorial'. Wood engravers' skills in reproducing images in the mid-Victorian period were of such a high standard that the value of their artisan skills became overlooked. Some processes were aided by the introduction of tools such as multiple gravers and ruling machines, but there remained huge skill in applying those effectively. The process of capturing the nuances of a tonal drawing in a wood engraving equally took great skill. Once the print from that engraving was made, it tended to be the work of the original illustrator or artist which was admired, rather than the skill of the wood engraver's interpretation of that work. "The more skilled an artisan, the more likely their skill will be taken as 'merely' mechanical," writes art historian Glenn Adamson.

The wood engraving trade became increasingly de-professionalised over several decades towards the close of the 19th century, making it easier for publishers to shed engraving jobs. As photomechanical methods of image production became more widespread, these eventually replaced the wood engraver by the beginning of the 20th century. Engravers were expert at creating facsimile images, but could not compete with the impact of an actual photographic image at a time when photography was presented as the future of image making. 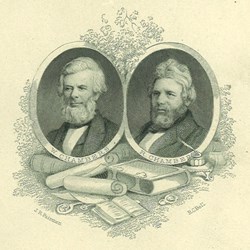 Born in 1837, John (sometimes James) Ramsay Pairman began working for W. & R. Chambers in 1858. During his 50 year tenure, he rose from wood engraver to superintendent of the Illustrating Department by 1866 and acted as the firm’s Art Editor.
More