The design of this elegant modernist dining suite was once admired by the Queen Mother. Now extremely rare, it makes a significant new addition to the national collection.

The sideboard and one chair from the suite will be on display in the Design for Living gallery, Level 3, National Museum of Scotland.

The Allegro dining suite is a rare example of a much celebrated collaboration between one of Britain’s leading architects, Basil Spence, and a pioneering Scottish manufacturer, Neil Morris.

Sideboard from the Allegro dining set.

Sir Basil Spence (1907-76) was one of Scotland's most celebrated architects, responsible for the rebuilding of Coventry Cathedral, the creation of the Sussex University campus, major housing projects such as Glasgow’s Hutchesontown C tower blocks, commercial buildings including Glasgow Airport and the Scottish Widows complex in Edinburgh, and Government commissions such as the Hyde Park Cavalry Barracks and the British Embassy in Rome. 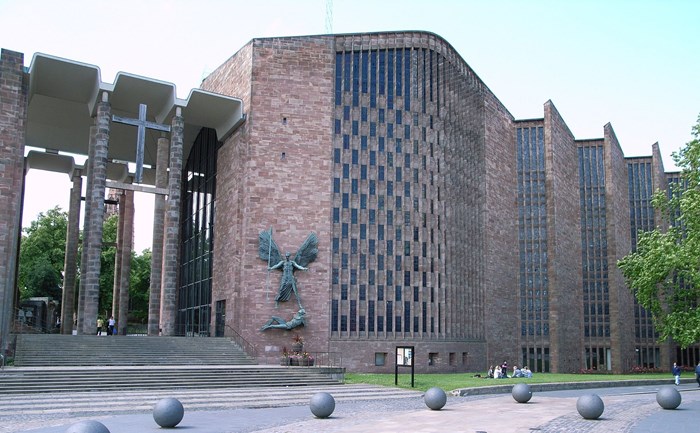 During the years of economic reconstruction that followed the Second World War, Spence co-ordinated the design of several exhibitions promoting British industry. Between Britain Can Make It in London in 1946 and the Festival of Britain in 1951 came a constant stream of smaller events including Enterprise Scotland, held at the Royal Scottish Museum in Edinburgh in 1947, and the Scottish Industries Exhibition at Kelvin Hall in Glasgow in 1949.

Also involved in these exhibitions was Neil Morris, the owner of H. Morris and Company. Founded in Glasgow in 1914, the firm, in addition to making furniture, fitted out ocean liners and made helicopter blades. At the onset of the war, Morris joined an elite group of subcontractors making parts for Mosquitos, Lancasters and other British warplanes. The company was thus in a good position to return to furniture production in 1945, in spite of post-war Utility Scheme restrictions: furniture, like food and clothing, was rationed, and these restrictions were designed to ensure that scarce resources such as wood were used as efficiently as possible.

Utility Scheme rules were relaxed in 1948, and Neil Morris designed the Cumbrae range of furniture incorporating plywood during this so-called Freedom of Design period, often using techniques from the USA that many UK competitors had little knowledge of.

A meeting of minds

Morris and Spence met during the preparations for Britain Can Make It, where Morris was an exhibitor and Spence the chief architect. At Enterprise Scotland, the following year, the café was fitted out with Morris furniture. Then, in 1948, Morris approached Spence to design Allegro specifically for the Glasgow Today and Tomorrow exhibition at Kelvin Hall in March 1949. 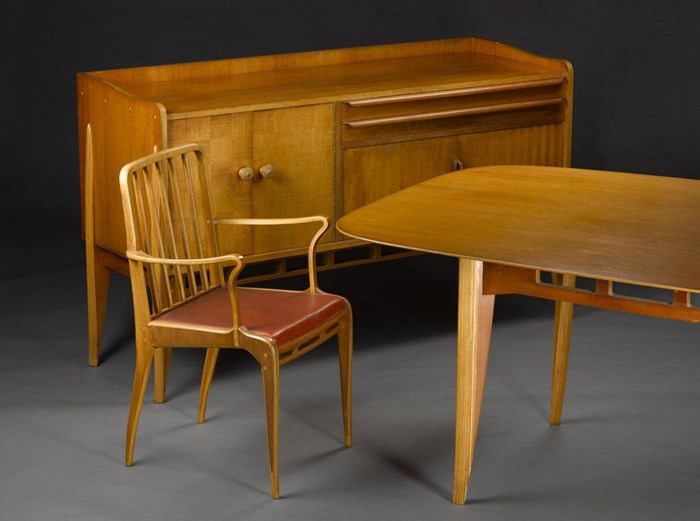 Morris was doubtless keen to capture Spence’s name value, but the collaboration was beneficial to both parties and in tune for the period, when many young architects freelanced between architecture and industrial design.

Spence had learnt how to assemble artist commissions within a single structure at the Glasgow Empire Exhibition in 1938 and would continue to work closely with artists and craftsmen at the Festival of Britain and at Coventry Cathedral.

Allegro immediately won a first class diploma from the Council of Industrial Design, appearing on the cover of Design magazine. At the Scottish Industries Exhibition in September 1949, Allegro was displayed in front of a mural by the artist John Hutton, who would later engrave the Great West Screen for Coventry Cathedral. The suite was reportedly admired by the Queen, whose daughter, Princess Elizabeth, had just received a wedding gift of Morris furniture from the City of Glasgow. Shrewdly, Morris donated examples of the Allegro chair to both the Victoria and Albert Museum and the Museum of Modern Art, New York.

The significance of Allegro lies in Spence’s exceptionally well-conceived design, which is something of a poem to plywood, striving to expose and express the material at every opportunity.

The exploration of new materials was of great importance to organic modernists, such as the Americans Charles and Ray Eames, who practised art, architecture and design concurrently.

The chair in the Allegro suite was very much a technical tour-de-force, comprising over one hundred mahogany and betula laminations, bonded under high frequency electrical and hydraulic pressure with a phenolformaldehyde resin. The result was exceptionally light, stable and strong for the period. Subtle horizontal curves contrast with thin verticals, often tapered in one plane. 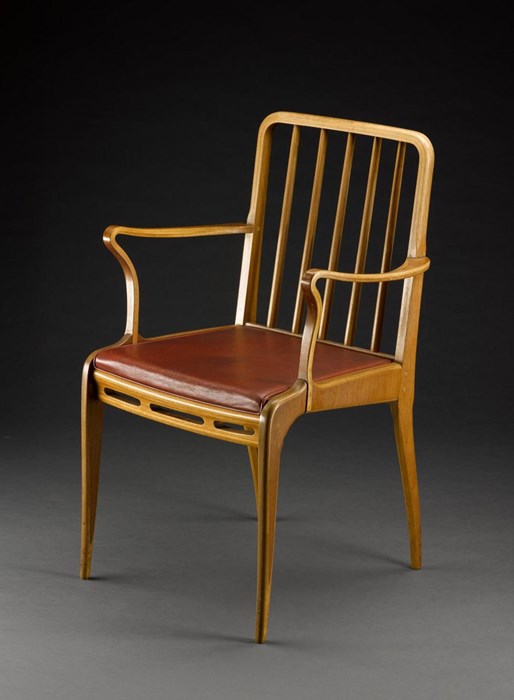 Above: Chair from the Allegro dining suite.

The well-mannered elegance was picked up by the designer Ernest Race, writing for The Architect’s Journal in April 1949:

“
[Allegro] is a very beautiful and sensitive piece of work, truly contemporary in conception yet having much in common with the finest British work of the late eighteenth century.

The parabolic cornering and chamfered edge of the table top create an object which entertains the eye in the best tradition of the applied arts. The strongly tapered legs of the table and sideboard derive from Morris’ existing Cumbrae designs but are lent subtlety and interest from being rounded in a manner reminiscent of the helicopter blades and propellers from which the suite drew its material inspiration. 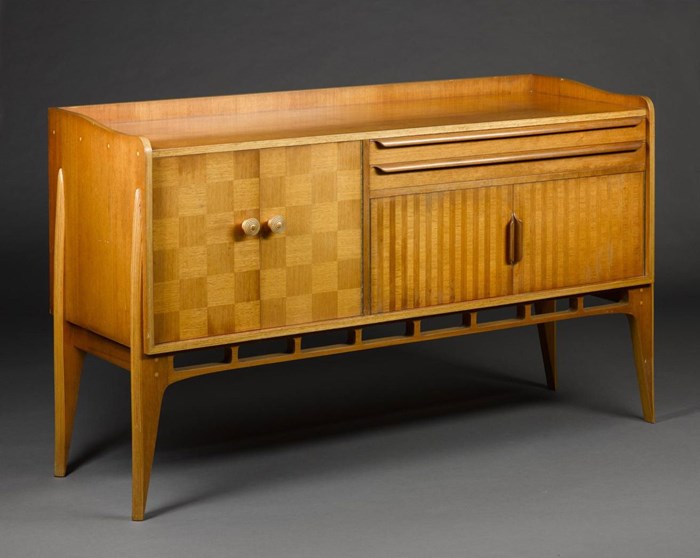 Above: Sideboard from the Allegro suite.

Within the sideboard the thin yet surprisingly sturdy shelves and racks for glasses were made from a new material called Vendura. This consisted of aluminium sheet sandwiched between veneers, in this case sycamore, bonded with an adhesive that had been invented for wartime tank and aircraft production. Innovative materials appealed to both Morris and Spence. Morris later wrote:

“
I cannot express the excitement aroused by the use of a new machine, the start of a new job, the discovery of a new material, or a new way of doing something.
- Neil Morris 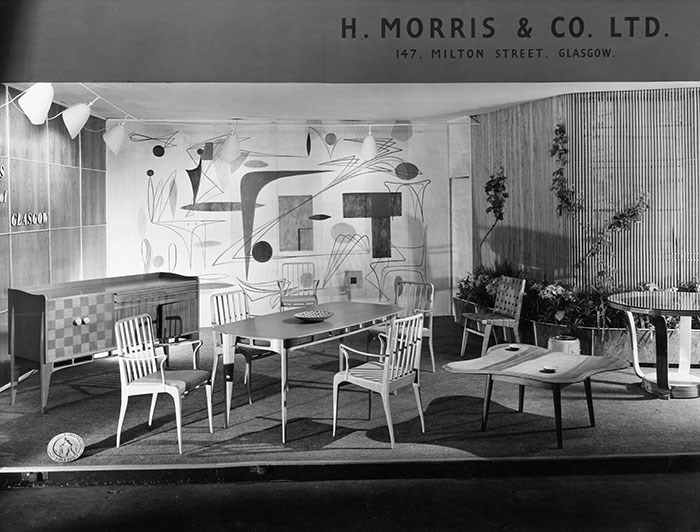 Above: The suite on display in the Glasgow showroom of H. Morris & Co. © Historic Environment Scotland (Spence, Glover and Ferguson Collection).

Although marketed through leading retailers, very few complete Allegro suites appear to have been made, doubtless because of the high cost. Allegro was essentially a loss-leader, encouraging sales of Morris’ cheaper and simpler Cumbrae range.

A partner in the leading furniture retailer, Dunn’s of Bromley, recollected in the 1990s that the only Allegro suite the firm sold was to a well-known patron of inter-war modernism, the Czech industrialist Thomas J. Bata, then in exile in Knightsbridge.

The suite recently acquired by National Museums Scotland is believed to have been in a Scottish home since 1949. Now, however, it has a new home in the national collection, where its restrained elegance and cool modernist lines will continue to inspire and delight.