This rare and beautiful 13th century reliquary was made in Limoges to house the relics of saint.

Reliquaries have been part of Christian tradition since at least the 4th century. 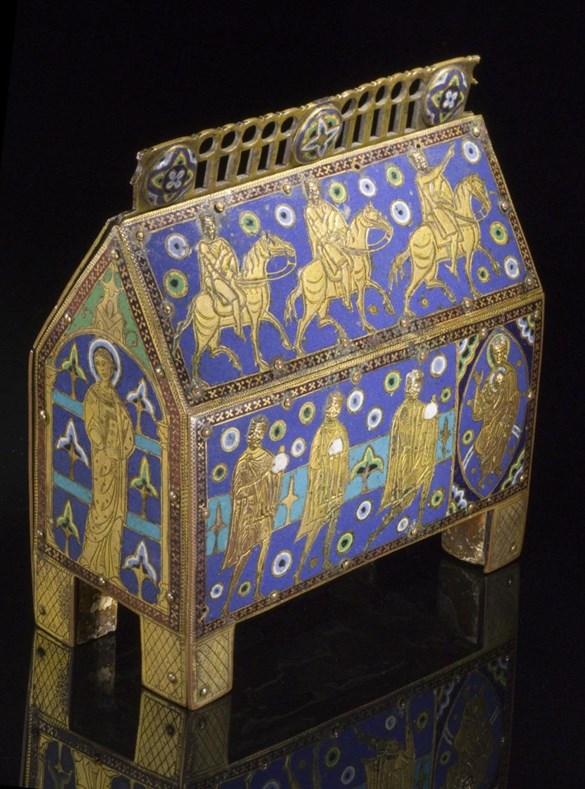 In the medieval period relics of saints – fragments of bone, clothing and other items – were powerful symbols. The relics were preserved and cherished, often in beautifully designed and expensive reliquaries or shrines, and were shown to the faithful on special occasions. Pilgrims would travel long distances to see them.

Where was the reliquary made?

This house-shaped reliquary, or châsse, was made in Limoges, in central France, the principal centre of enamel manufacture in the Middle Ages. The Limoges workshops operated on a production line system, with several men working on each piece. This division of labour was necessary to deal with the huge demand for reliquaries, book covers, pyxes and other items for church services. Limoges reliquaries like this one ended up in churches all over Europe, and around 700 are still in existence today. 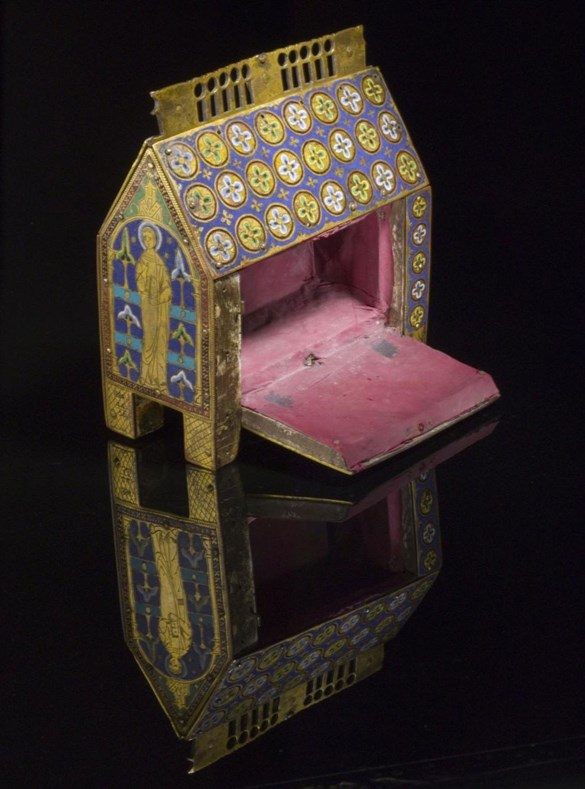 Above: Inside the 13th century reliquary casket.

What does the reliquary represent?

We do not know which saint is associated with this casket. However, it is clearly decorated with scenes from the story of the Three Kings, or Magi. On the lid the Kings are shown following the star of Bethlehem, while on the front panel they bring their gifts of gold, frankincense and myrrh to Jesus and the Virgin Mary. The Journey of the Magi and Adoration of the Magi were popular subjects for Limoges reliquaries – for example, a similar casket can be found in the Musée National de Moyen Age in Paris. 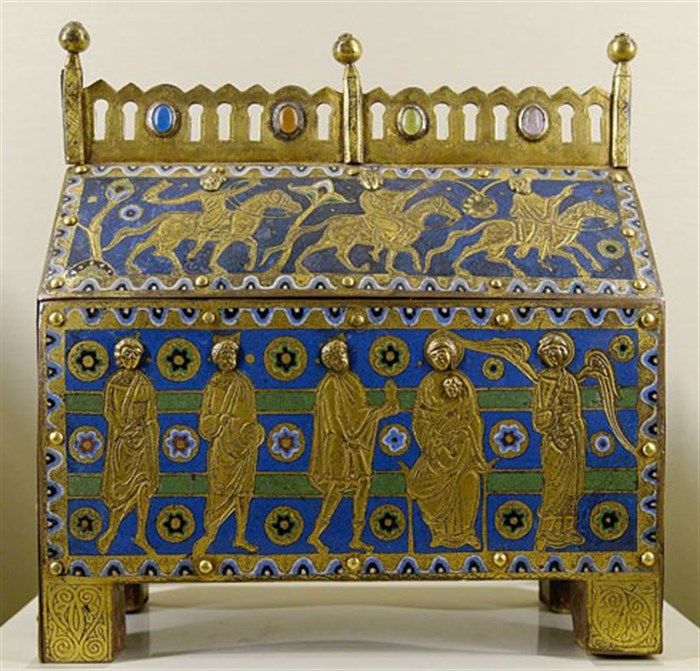 How was the reliquary decorated?

The reliquary follows the fashionable Gothic style, its design reflecting the pointed arches and tracery of medieval Gothic architecture such as the cathedral of Notre Dame in Paris, which was built between the 12th and 14th centuries.

Above: The back of the 13th century reliquary casket.

The casket is decorated by a technique called champlevé. This involved cutting away surface areas from a sheet of metal and filling the recesses with powdered glass in a chosen colour. The sheet was then placed in a kiln hot enough to melt the glass but not the metal. Afterwards the panel was polished, gilded and nailed onto a wooden frame. The background of this reliquary has been enamelled in this way, with the figures engraved and then gilded. The heads were made separately and were applied to the panel before it was enamelled and gilded.

Although many of the relics carefully preserved are now regarded as fakes, the reliquaries themselves remain beautifully crafted pieces of work.