Uncover the story behind this fragile Chinese artefact.

The earliest written references to the decorative use of kingfisher feathers in China date from the Han dynasty (206 BCE-220 CE). 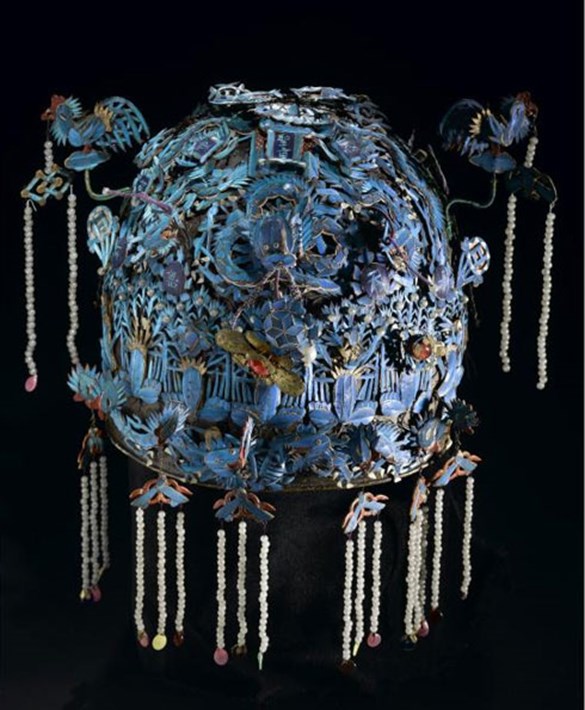 Acquired in 1969, this delicate Chinese headdress is magnificently decorated with feathers from kingfisher birds. Centuries ago, kingfisher feather crowns (known as feng guan) decorated with phoenix, dragons and precious stones were only worn by Empresses in China. From the 19th century, however, a headdress such as this would be worn either by a bride on her wedding day or by an aristocratic lady on formal occasions, as an indication of her wealth and status.

The origins of this crown are not known, however, its quality, design and craftsmanship suggest it once belonged to an elite woman with honourable rank. For example, the famous Tang empress Yang Guifei (719-756 CE) was said to have worn a kingfisher crown, which fell to the ground as she was dragged away by rebel troops and executed.

Bringing the headdress back to life

Unfortunately, the headdress arrived at the Museum in very poor condition. Many parts of it were broken or even lost and several components had been re-attached in the wrong position. Not least, it was extremely dirty, which severely dulled the appearance of the brilliant blue kingfisher feathers.

Bringing the headdress back to its original condition was the focus of conservation student Lydia Messerschmidt’s internship in the Artefacts section. By carrying out in-depth examination and analysis, Lydia identified parts of the headdress requiring stabilisation, as well as the correct placement for components such as the phoenix heads, which adorn the sides and front rim. 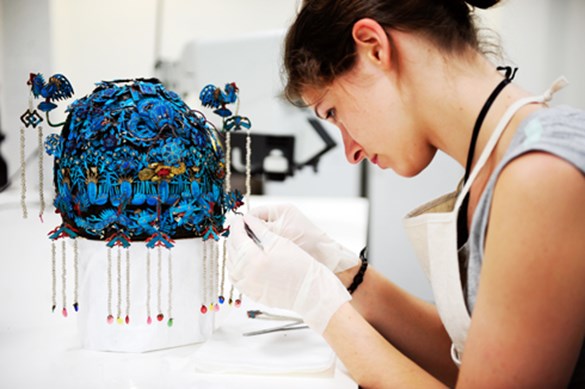 She tested various materials and methods for the safe and effective cleaning of the feathers and repair of the broken elements.

Cleaning the feathers was a slow meticulous process that was carried out under the microscope. Dirt was removed with tiny cotton swabs, dipped into a cleaning solution.  Only a small amount of the solution was applied each time, to protect the delicate feathers and underlying paper structure. Crushed ornaments were re-formed through gentle physical manipulation and any breaks in them were mended with an adhesive.

After three months of challenging work, Lydia finished the treatment of this complex object with great success. Once again, it is a headdress fit for a very special occasion.