This evening dress of bright leaf green and red shot silk is by the Maison Lucile Ltd, founded by Lady Duff Gordon, and is on display in our new galleries.

Lady Duff Gordon’s stepfather, and both her first and second husband, were Scottish. 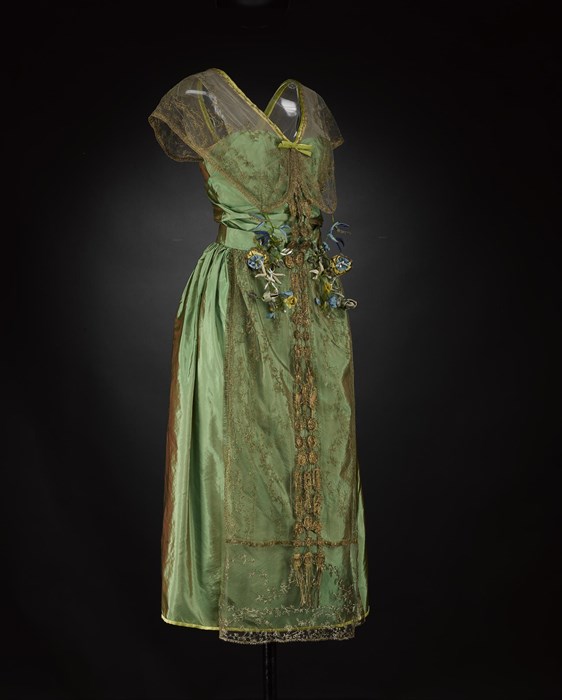 This evening dress of bright leaf green and red shot silk is by the Maison Lucile Ltd, founded by Lady Duff Gordon. The first London-based couturière to achieve international success, Lucile’s pioneering spirit engineered designs that exemplified luxury and liberation for women at the turn of the twentieth century. Her contributions to haute couture, merchandising and the performing arts helped to pave the way for the birth of modern fashion as we know it today. Known for her romantic, feminine designs, often rendered in cascades of diaphanous chiffon, gossamer-light wisps of lace and shimmering silks in delicate colour combinations, Lucile gathered a prestigious clientele. Among them were royalty, high society ladies, the reigning stars of Hollywood’s flourishing silent cinema and three of the most beguiling fashion icons of the day: Mary Pickford, Lily Elsie and Irene Castle.

What was the inspiration for this dress?

Often inspired by the late Rococo manner of Jean-Honoré Fragonard’s 18th century paintings, Lucile’s handwriting was in her scalloped hemlines, obi-like sashes, and passementerie comprised of the finest silk ribbon rosettes and delicate embroidery. Believing that ‘dresses, if they are to give any pleasure to their wearer, must become a part of the personality’, she called these ethereal evening dresses ‘gowns of emotion’, honouring each one with a unique poetic name to reflect the unique character of her client, or the expression of a mood. 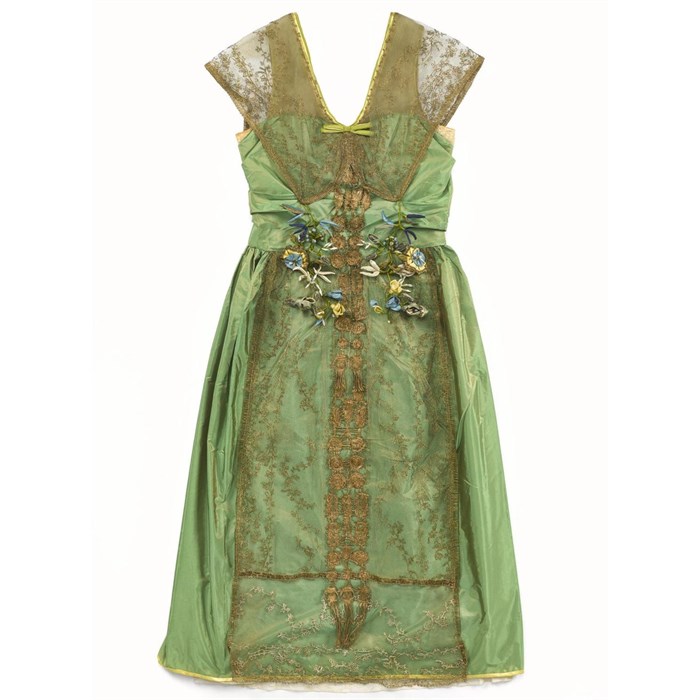 This dress is particularly interesting for its date: made shortly after the end of the First World War, the choice of vibrant green was fitting for its time. Although considered unlucky for some, in France – where it was made – green was always used as a symbol of hope and to Lucile it represented ‘God’s choice for a world that needed rest, it is the colour of renewing, of re-birth’. 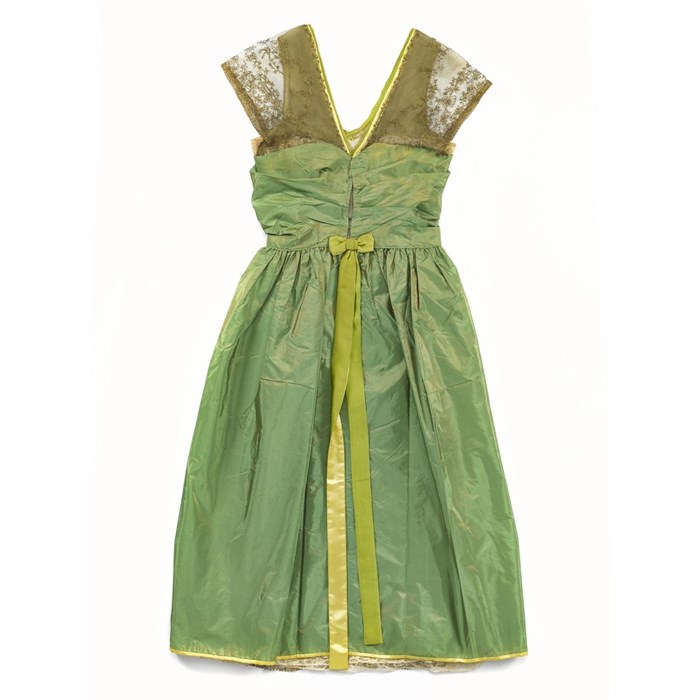 Lady Duff Gordon has a remarkable personal story. A single mother estranged from her first husband in the 1890s, she began her fashion career cutting out dresses on the floor of her house, and ended it as the head of an internationally famous brand of its time.  Her sensational introduction to the fashion world was eclipsed in 1912 when she and her husband survived the sinking of the Titanic but became embroiled in scandal surrounding their controversial escape in a near empty lifeboat. Fortunately for the rich tradition of haute couture, her reputation survived and her legacy has endured.

Inspired by the theatre, she was the first to develop the mannequin parade – the forerunner of the modern catwalk show – and thus precipitated the cult of the professional model, plucking young women from anonymity and taking them to international stardom. She launched liberating slit skirts and low necklines, championed the brassiere in opposition to the corset and promoted alluring, pared-down lingerie with her range of filmy underclothes ‘as delicate as cobwebs’. 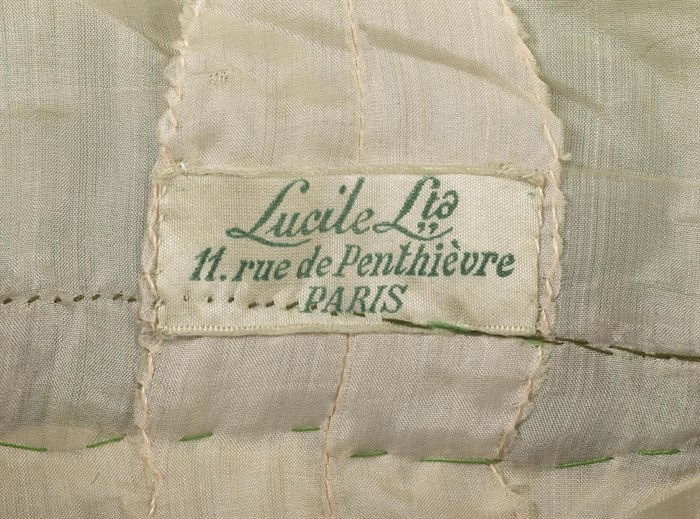 What happened to the Maison Lucile?

A success story of the Edwardian era, Lucile Ltd expanded to branches in New York (1911), Paris (1912) and Chicago (1915).  Her introduction to America was well-timed: Europe had recently entered into war and its effect on industry and transport had impacted the ability of Parisian couture houses to export to the US. Lucile’s popularity became such that she was invited to design for the Ziegfeld Follies at the height of the showgirl’s popularity.

However, Lucile’s creative success was not matched by astute business acumen and a number of ill-advised deals and legal entanglements had left her vulnerable. The cost of living was high, trade in Paris and London was struggling and after America also entered the war in 1917 the mood of austerity spread. Lucile’s decision to sell the Paris and American branches of the business and its subsequent move to produce cheaper models drove her back to London. There she found a dispirited staff unable to procure quality silks and execute orders and realised that ‘the old standard of extravagant dressing had gone for ever’. Hers had been a style suited to the belle epoque ballroom, not to the harsh reality of post-war life and the impending jazz age, and in 1923 she was finally bankrupt. 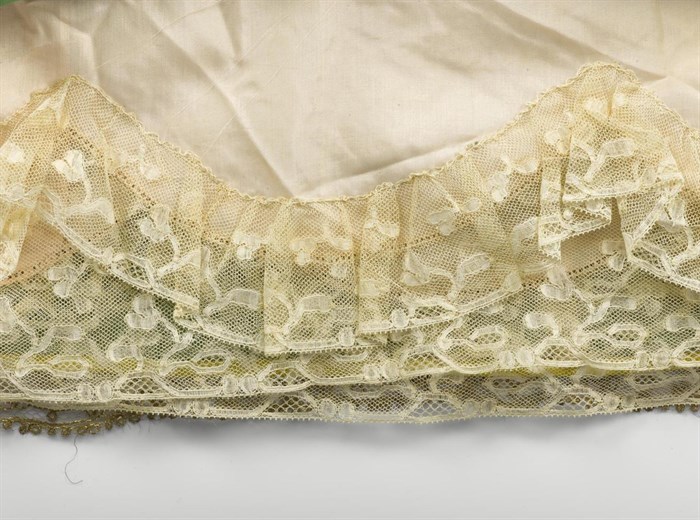 How was the dress prepared for display?

You can see the Lucile dress in the Fashion and Style gallery at the National Museum of Scotland. Prior to that, the dress received treatment in our conservation lab, to enable it to be safely mounted for display. As part of the treatment process our textile conservators reassessed the existing support-work on the shoulder straps. The polyester gauze had completely obscured the original material, giving the impression of the material being very dirty; on reversal of the support it was discovered that the original straps were in good condition and that this original element of the dress could be revealed for display. 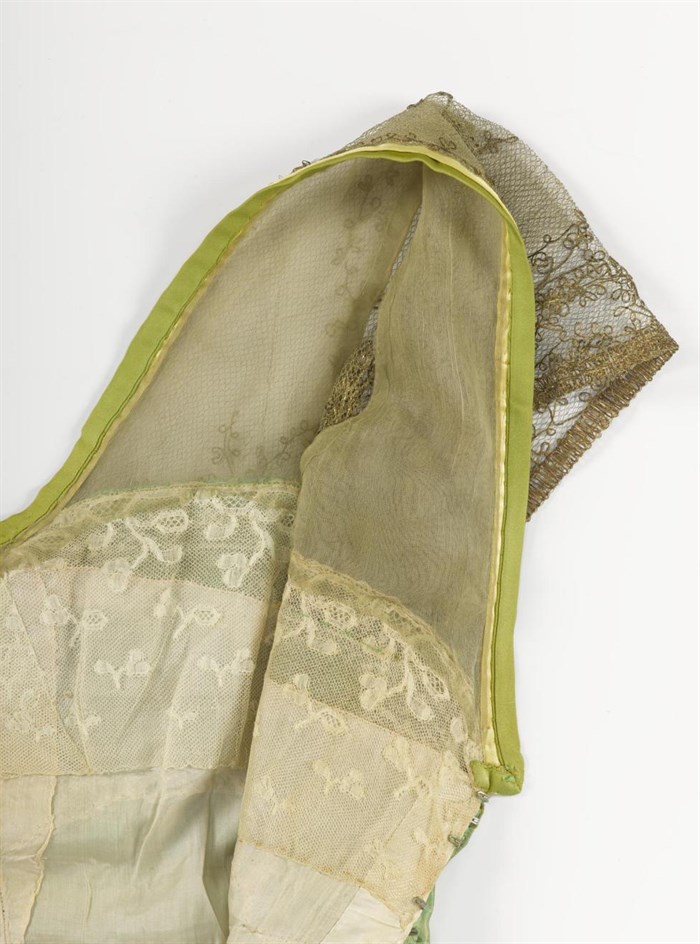 All references taken from: Lucile Duff Gordon, A Woman of Temperament, (London, 2012). Originally published as Discretions and Indiscretions by Lady Duff Gordon (London, 1932).