Hung in Europe’s most noble households, this luxurious tapestry belongs to a Flemish set known as The Triumph of the Seven Virtues. It was woven in Brussels during the early 16th century.

Early 16th century. The absence of a Brussels mark means it was probably woven before 1528.

Without a Weaver’s mark, no one knows for sure which Flemish workshop created the Triumph of Prudence. It was likely woven in Brussels; other tapestries from the same series bear the Brussels mark.

No complete set of The Triumph of the Seven Virtues survives. The Triumph of Temperance no longer exists anywhere in full, although fragments have been sewn into other tapestries at Biltmore House, Asheville and the Museo de Santa Cruz in Toledo.

The Triumph of the Seven Virtues 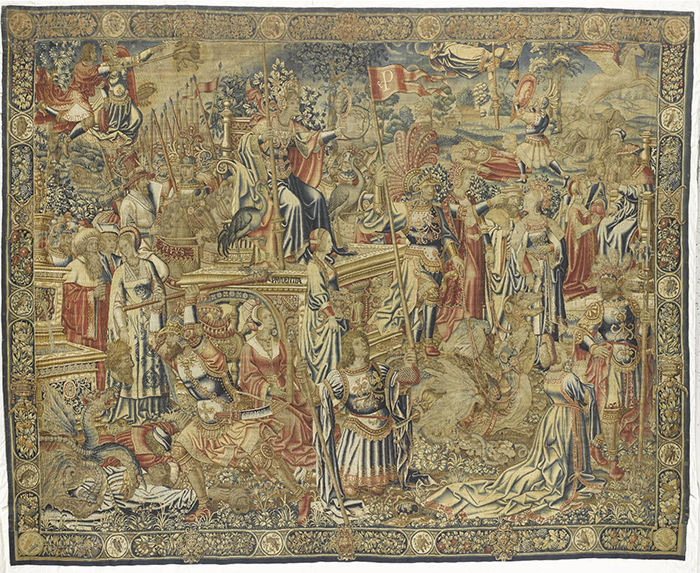 Above: The full tapestry

This luxurious wall hanging belongs to a set of early Flemish tapestries known as The Triumph of the Seven Virtues. It was woven in Brussels during the ‘Golden Age’ of Flemish tapestry. The Triumphs were a popular set and several copies were made to display in noble houses across Europe.

Designed to delight and instruct, each tapestry depicted either a theological virtue – Faith, Hope and Charity, or a cardinal virtue – Temperance, Prudence, Justice and Fortitude. Characters from biblical, historical and classical sources were brought together in one magnificent symbolic scene. While it might not be obvious to us as viewers today, 16th-century admirers would have been able to read this tapestry almost like we read a book. The characters and symbols served as a moral guide to the ruling elite and as a reminder on how to achieve salvation.

Prudence is an allegorical figure. In this tapestry, she represents one of the four cardinal virtues and is surrounded by prudent characters from history and mythology. These leaders and heroes triumphed by commanding well, using a balance of knowledge and judgement to foresee possible future events and acting towards them for good purposes.

You can see Prudence right in the middle, crowned with laurels and sat upon a throne. Perseus, Greek hero and son of Zeus, brandishes a shield to the right. He used his intellect to defeat Medusa. To the left is another symbol from Greek mythology, the Titan Prometheus. He and his mother Themis allied with the victorious Zeus in the War of the Titans; his very name means ‘forethought’. Fans of Harry Potter might recognise the name Cassandra, the doomed seer for whom Divination professor Cassandra Trelawney is named. Blessed with foresight but cursed never to be believed, she stands in front of Prudence.

Where is the tapestry now?

Approximately four metres by five metres in size, The Triumph of Prudence is fragile and one of the largest textile objects in our collections. Now almost 500 years old, its delicate threads and fabric needed to be conserved before it went on display in our Art of Living gallery in 2016.

Therefore, the tapesetry was treated by a team of textile conservators and tapestry specialists, here at the Museum in Edinburgh, and at specialist studios in England and Brussels. The surface was gently cleaned, a linen support added to the back, and the magnificent stitching conserved by adding sympathetic repairs, removing knots and loosening warps.

The images and film below show details of this process.