Purchased with the help of the Art Fund

The portrait was probably painted at the Dalrymple family home of Newhailes, near Edinburgh, perhaps in the Chinese sitting room. 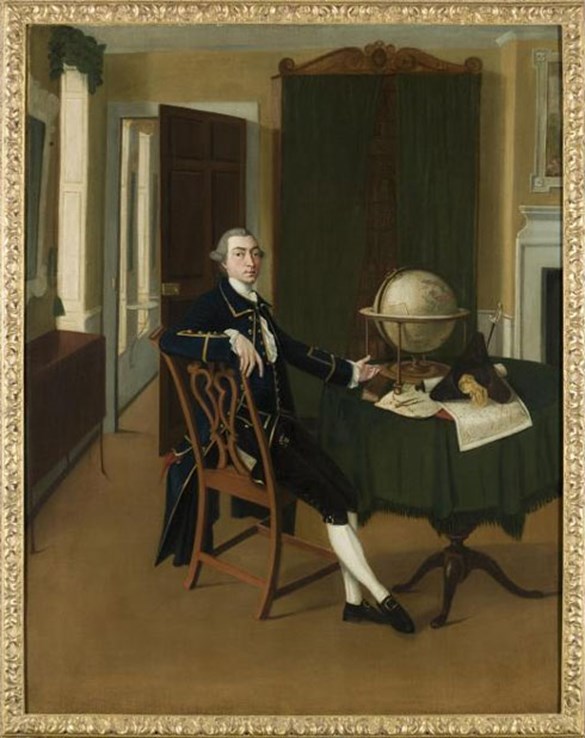 Who was Alexander Dalrymple?

Although relatively unknown to today’s public, Alexander Dalrymple (1737-1808) led a life exemplifying service to his country during the age of Enlightenment. His influential role in Britain’s maritime history makes him an outstanding historical figure.

Dalrymple was born in Newhailes, near Edinburgh, on 24 July 1737. In 1795, at the age of 58, Scottish-born Dalrymple’s became the first Hydrographer to the Admiralty. Hydrography is the science that maps, measures and describes water, and is vital for the safe navigation of vessels at sea.

In his portrait, Dalrymple is wearing the uniform of a sea-officer of the East India Company, and he is aged about 28. His association with the company began in 1759, when he commanded an East India Company ship whilst surveying in the China Sea and around the Philippines.

Dalrymple is pictured with a globe, a map of the Dutch province of Friesland, two hydrographic charts and a pair of dividers, the tools of his trade.

Dalrymple's experience with the East India Company enabled him to organise a vast governmental library of maps in London for the benefit of British traders and travellers.

He is credited with the creation and design of the Admiralty Chart, which was subsequently developed over 150 years to form a body of more than 4,000 charts. These charts provided a guide to safe navigation of the world’s oceans by naval and merchant shipping. In this way, he helped to lay one of the secure foundations upon which the far-flung trading posts of the British Empire was based. 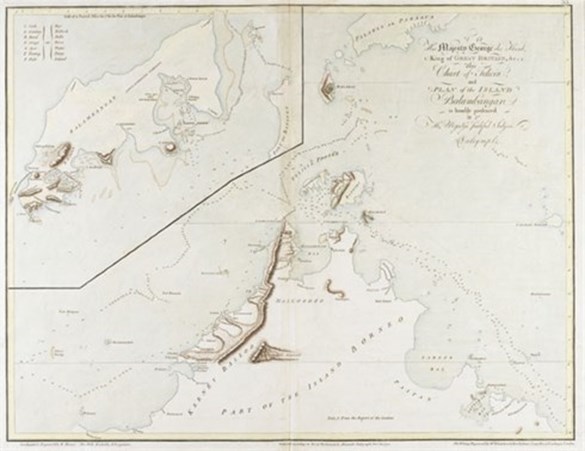 Above: Double-page hand-coloured engraved chart of Felicia and plan of the Island of Balambangan (off modern Borneo), by Alexander Dalrymple, 1770.

Whilst translating some Spanish documents captured in the Philippines in 1752, Dalrymple found evidence that showed a passage south of New Guinea, now known as the Torres Strait. The discovery led Dalrymple to publish a book which aroused widespread interest in his claim of the existence of an unknown southern continent. This resulted in Captain Cook undertaking another voyage of exploration into the South Pacific which eventually led in 1770 to the British discovery and charting of the Eastern coastline of Australia.

Today, the headquarters of the United Kingdom Hydrographic Office in Taunton are named after Dalrymple and his papers are deposited in the National Archives at Kew. However, the only other original likeness of Dalrymple is a pencil profile held in the collections of the National Library of Australia, which makes this portrait a rare and important addition to the Museums’ collections.