Our Nimrod served with the RAF from the early 1970s until March 2010, when it was decommissioned. 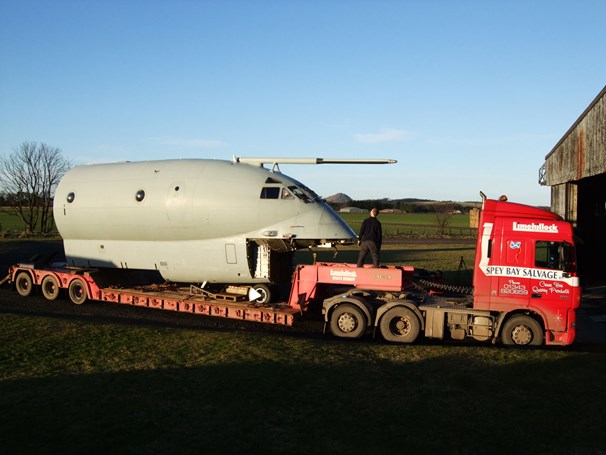 Above: The Nimrod fuselage arriving at the National Museum of Flight.

History of the Nimrod

The Hawker Siddeley Nimrod MR1/MR2 was developed and built in the United Kingdom. It was an extensive modification of the de Havilland Comet, the world's first jet airliner, an example of which is on display at the National Museum of Flight.

The Nimrod was a Royal Air Force maritime patrol aircraft, with anti-submarine warfare, maritime surveillance and anti-surface warfare capabilities. It served with the RAF from the early 1970s until March 2010.

Nimrods played an important role in search and support for ships lost or in difficulty at sea. Many high profile disasters received support from Nimrods, including the Fastnet yacht race disaster in 1979 and the Piper Alpha oil rig disaster in 1988.

With a 40 year association with Scotland, the Nimrod is an important type to be represented in the collections of the National Museum of Flight. The Nimrod operated from RAF Kinloss during the Cold War, during times of national crisis and in an international role. 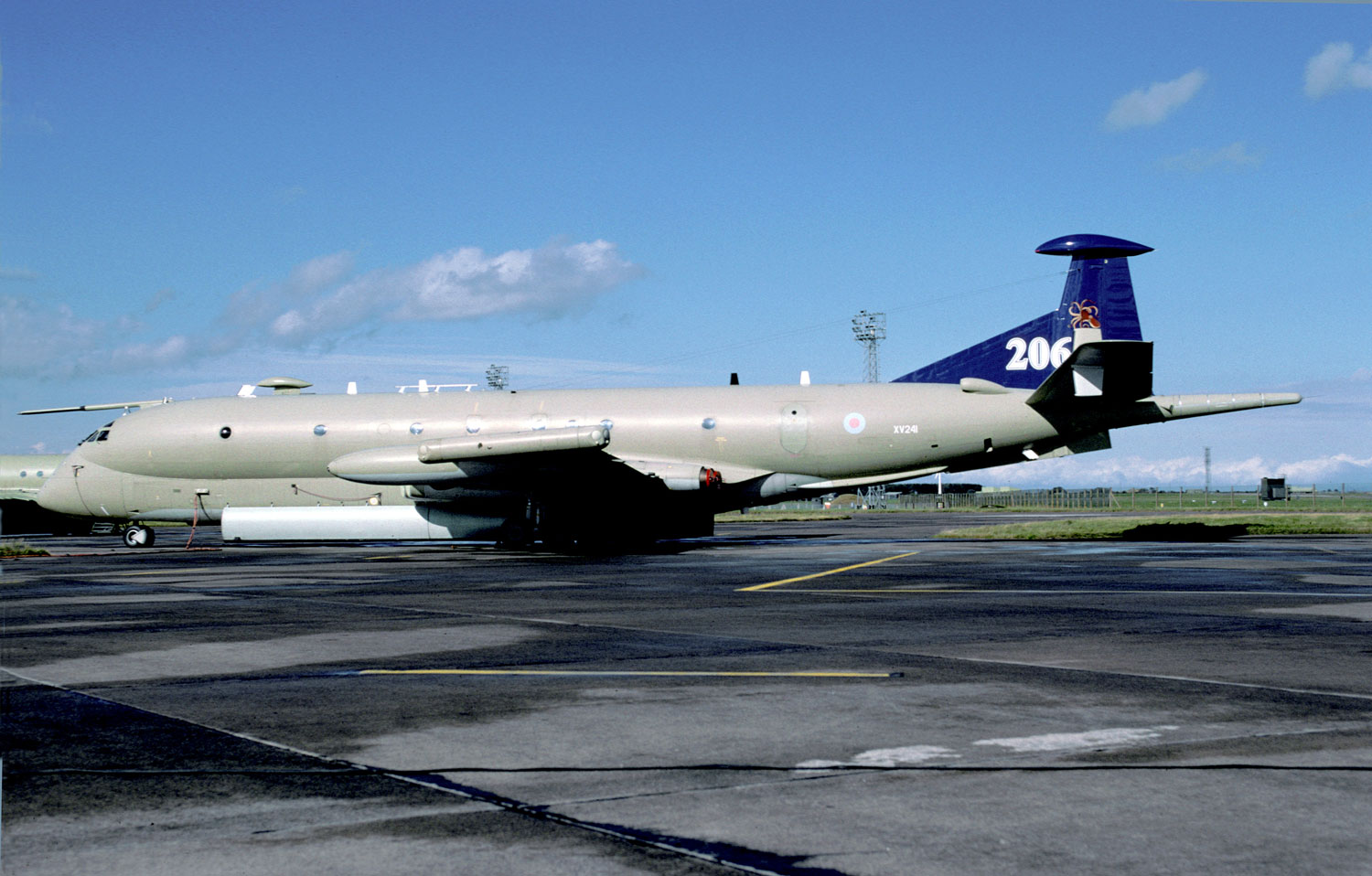 The development of the Nimrod patrol aircraft began in 1964 as a project to replace the Avro Shackleton. The design was based on the Comet 4 civil airliner. The Comet's turbojet engines were then replaced with Rolls-Royce Spey turbofans for better fuel efficiency.

Major fuselage changes were made, including the introduction of an internal weapons bay, an extended nose for radar, a new tail with electronic warfare sensors (ESM) mounted in a bulky fairing, and a MAD (Magnetic anomaly detector) boom.

After the first flight in May 1967, the RAF ordered 46 Nimrod MR1s. The first example (XV230) entered service in October 1969. Five squadrons were eventually equipped with the MR1.

Starting in 1975, 32 aircraft were upgraded to MR2 standard. Enhancements included modernisation of the electronic suite, provision for in-flight refuelling and additional ESM pods on the wingtips. The in-flight refuelling capability was introduced during the Falklands War, as well as hardpoints to allow several Nimrods to carry the AIM-9 Sidewinder missile.

The Nimrod MR2 carried out three main roles: Anti-Submarine Warfare (ASW), Anti-Surface Unit Warfare (ASUW) and Search and Rescue (SAR). Its extended range enabled the crew to monitor maritime areas far to the north of Iceland and up to 4,00 km out into the Western Atlantic. With Air-to-Air Refuelling (AAR), range and endurance was greatly extended.

The MR2 was a submarine killer carrying up-to-date sensors and data processing equipment linked to the weapon systems. In addition to weapons and sonobuoys, a searchlight was mounted in the starboard wing pod for Search and Rescue (SAR) operations.

The crew consisted of two pilots and one flight engineer, two navigators (one tactical navigator and a routine navigator), one Air Electronics Officer (AEO), the sonobuoy sensor team of two Weapon System Operators (WSOp ACO) and four Weapon System Operators (WSOp EW) to manage passive and active electronic warfare systems. Two of the WSOps were used as observers positioned at the port and starboard beam lookout windows when flying in dense air traffic. The MR2 had the longest bomb bay of any NATO aircraft. 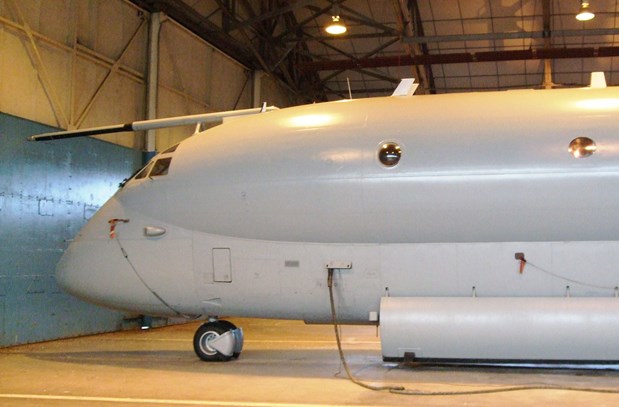 Above: The Nimrod fuselage at RAF Kinloss.

The Nimrod MR2 aircraft was withdrawn on 31 March 2010, a year earlier than planned, for financial reasons. The last official flight of the MR2 Nimrod took place on 26 May 2010, with XV229 flying from RAF Kinloss to Kent International Airport, Manston, where it is used by the nearby MOD Defence Fire Training and Development Centre as an evacuation training airframe.

After being decommissioned at RAF Kinloss in 2010, Nimrod XV241 was dismantled on 7 February 2011. The front fuselage arrived at National Museum of Flight three days later. 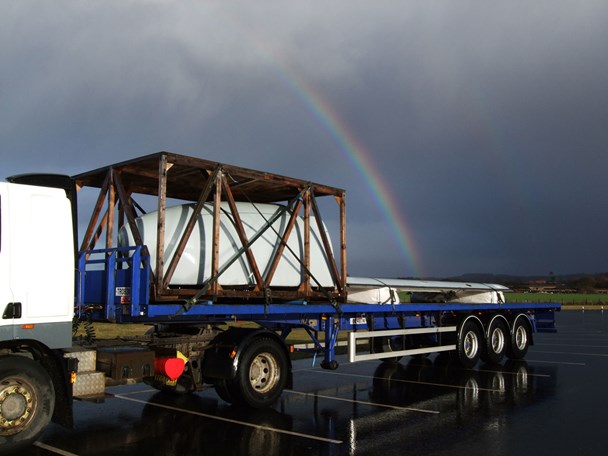 Above: A rainbow greets the arrival of the Nimrod at the National Museum of Flight.