The story of the plough

After 4,000 years the plough is still with us and its development has been at a slow and steady pace but the basic technology has remained the same. Discover more about this essential tool through ploughs in our collection.

“
a bladed farm implement used to turn over the surface of the soil and bury stubble, weeds, etc. in preparation for the cultivation of a crop.
- As defined by the Chambers 21st century dictionary.

The origin of the word is difficult to determine as throughout Europe the spelling is similar – ‘ploh’, pflug’ ‘ploeg’, ‘plogr’ and old Saxon ‘plog’.

A brief history of the plough

Farming is perhaps the oldest industry in the world and the earliest implement was probably a crude tree branch which was used to stir and break the surface of the soil. This earliest type of hand-held hoe, which the user scratched at the earth to bring nutrients to the surface, let moisture penetrate the soil. This would produce a suitable tilth and conditions in which seeds could be grown.

Over 4,000 years ago, the basic hand-held tool soon developed into simple scratch tools. These primitive ploughs were usually pulled by oxen. Using animals enabled farmers to till the land faster and more easily, which produced more food for their families.

A model of a plough pulled by two heifers.

The primitive plough made an open shallow furrow, pushing soil away to either side rather than inverting it. The ancient Egyptians made considerable advances to this design. They also succeeded in growing many crop varieties in a dry climate by devising complex irrigation systems.

Other ancient civilisations such as the Greeks and the Chinese were not far behind the ancient Egyptians and further developed the plough with wheels. The addition of a wheel provided great control and manoeuvrability.

Eventually, the plough was developed to cut a long soil slice and turn it upside down, burying the surface residue, conserving moisture, aerating the soil and killing weeds.

Ploughing after the 1600s

There was little attempt to change the design of the plough until the mid-1600s, with the Dutch being among the first to improve its shape. The change in shape was soon discovered further afield, including in Scotland. 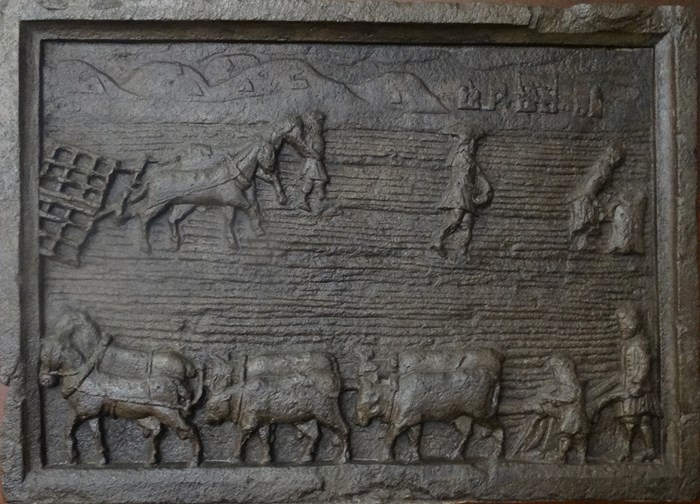 Above: Plough scene from a gravestone in Liberton Kirkyard, Edinburgh 1753. On display at National Museum of Rural Life.

This plough scene shows some of the people who would have been involved in ploughing. The farmer guides the plough, and a boy clears the stones and weeds away. There is also a man sowing, and a woman bringing him seed. A man and a pair of horses harrow ground before the seed is planted - then harrowed it afterwards. 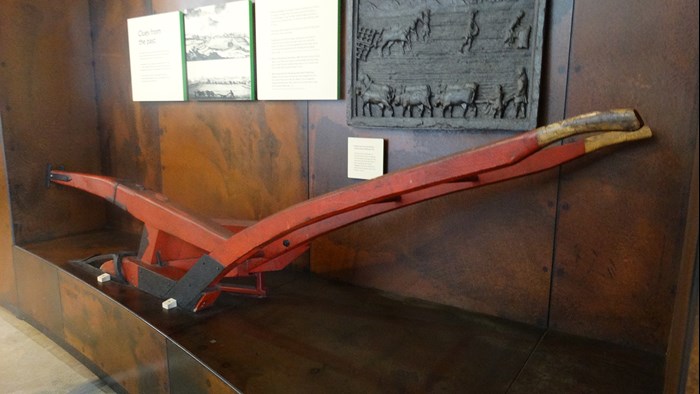 This replica Chilcarroch plough is made of wood and iron. It had to be strong to manage stony, wet or heavy ground. The bottom or sole of the plough is long and this kept it going straight and made it easier to use on sloping ground. It would have been pulled by cattle or horses. It needed a large team of people and animals, and farmers often shared their animals and labour.

Ploughing was only the first stage in getting the land ready for sowing. Farmers had to break up the large lumps of soil left by the plough, and make sure that the ploughed land was fully turned over. They also had to dig channels for draining off any trapped surface water.

In 1730, Joseph Foljambe patented the Rotherham Swing plough.  The Rotherham was a local plough to Yorkshire which had been improved upon with Dutch designs.  Later on, James Small, a Berwickshire man would improve on this design again. It had an iron blade that was lighter and easier to use than the traditional wooden plough.

The Rotherham plough was handled by two horses and one person whilst the traditional plough required four oxen, a ploughman and an ox driver. The Rotherham plough proved to be quicker and more efficient than previous ploughs, as well as reducing the cost for farmers. For many years this design provided very popular and was used extensively.

Working with plough and two horses

in 1763, James Small went on to use mathematical calculations and experimented with varying mouldboards, curvatures and patterns. He eventually produced a universal cast iron shape that turned the soil more effectively with less force, wear and strain on the horse and ploughman.  Over the years this ‘Scots Plough’, as it was known, became the modern mouldboard plough.

To grow crops in less-fertile areas, the soil must be turned to bring nutrients to the surface. A major advance for this type of farming was the mouldboard plough, introduced in the 18th century.  A coulter (or skeith) could be added to cut vertically into the ground.

Plough wall at the National Museum of Rural Life 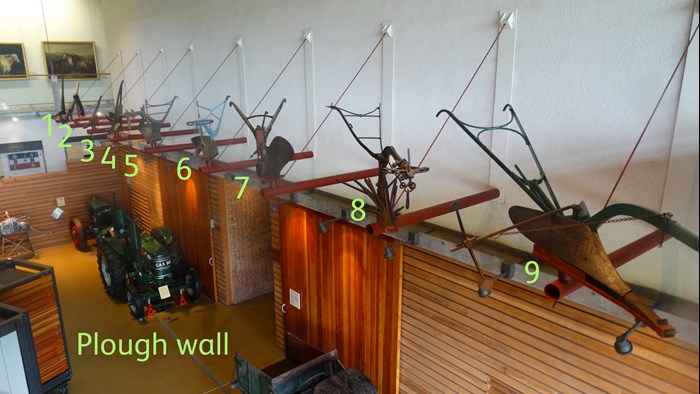 Cas chrom means 'crooked foot' in Gaelic. This simple hand tool was developed for working the soil in small areas of land, which were rocky or inaccessible to larger ploughs. Cas chroms were used in the north east of Scotland from the end of the 17th century. In some areas they were used until the 1930s. 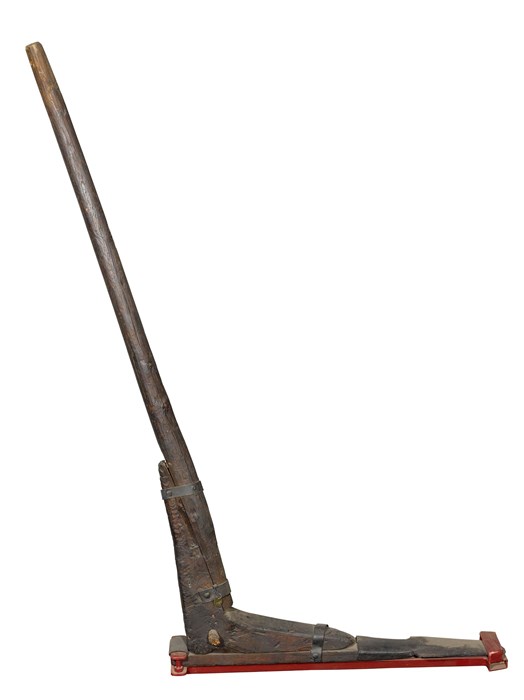 This plough was used in in the Hebrides. It was pulled by a single horse and cut the bottom of the furrow. It was well suited to sandy soil.

This type of plough dates back at least to the 17th century. They were used on the islands of Coll, Tiree, Harris, the Uists and Eriskay. Used along with the crann nan gad, this cut away the side of the furrow. 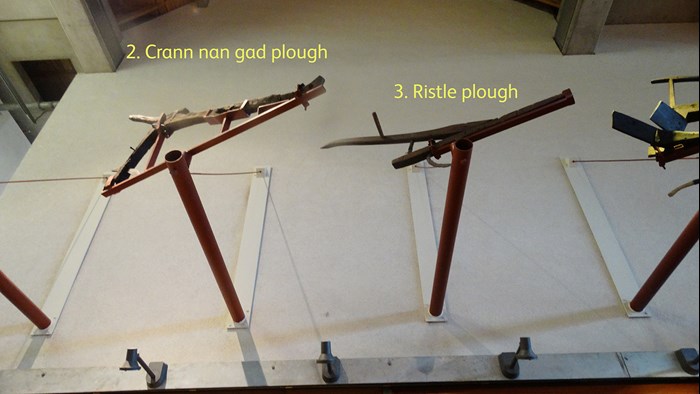 One man led the horse while another man guided the plough using only one hand. This type of plough was used on light sandy or peaty soil and is probably from Orkney. 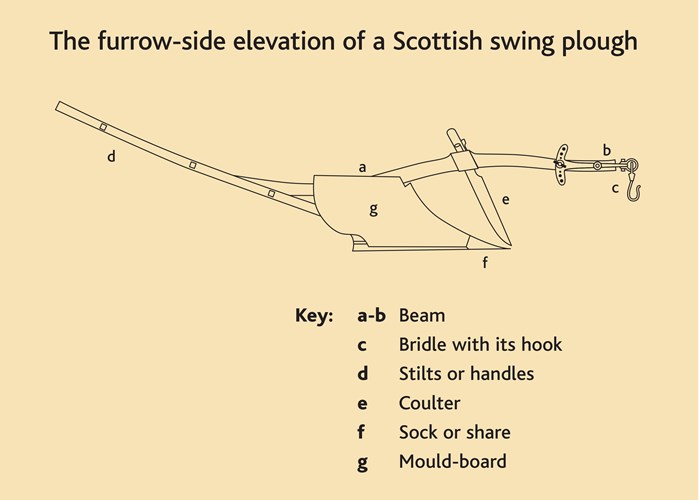 Above: Diagram showing parts of the Scottish swing plough.

Ploughing matches developed in the later 18th century when the new swing ploughs were first used on a wide scale. They had long mouldboards to cut neat and straight furrows. This helped to generate pride in the work of the ploughman. This pride became competitive. Ploughing matches were a good way to improve skills and technology. Producing a good furrow was the height of skill.  If the furrow was too ‘open’ the seed would get buried and would not germinate. 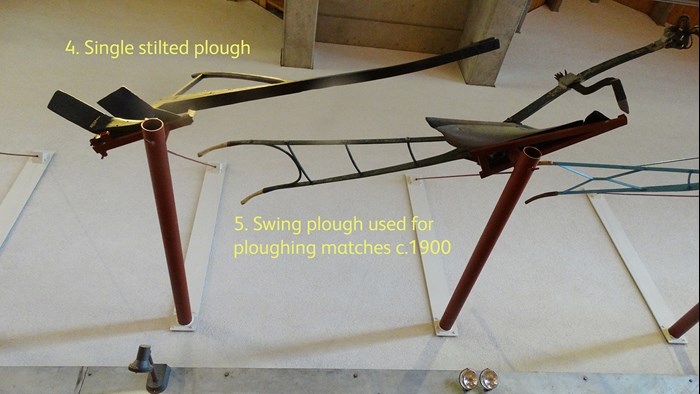 The standfast plough featured a bar-point at its front tip. The bar-point creates some ‘give’ in the tip, so that if the plough hit a stone, the point would not be damaged.

The Oliver plough had a reversible mouldboard, which could swing round so the furrows can be ploughed to either side. If the plough hit a stone, the point would not be damaged. 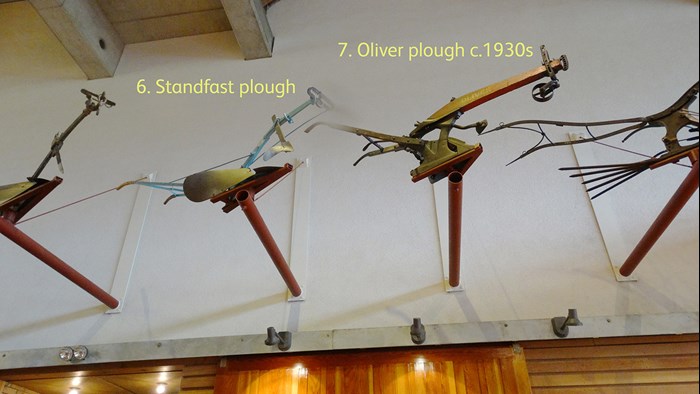 Made by Howard of Bedford, this plough was used for lifting potatoes.  It split the drill as it moved along, bringing the potatoes to the surface. The soil dropped back through the tines of the plough's forks.

Made by Newlands of Linlithgow, this plough was used to prepare the soil, setting up the drills ready for planting potatoes or turnips. The ‘marker’ was used to gauge the distance between the drills. Straight evenly spaced drills made the ploughing look smart and professional. 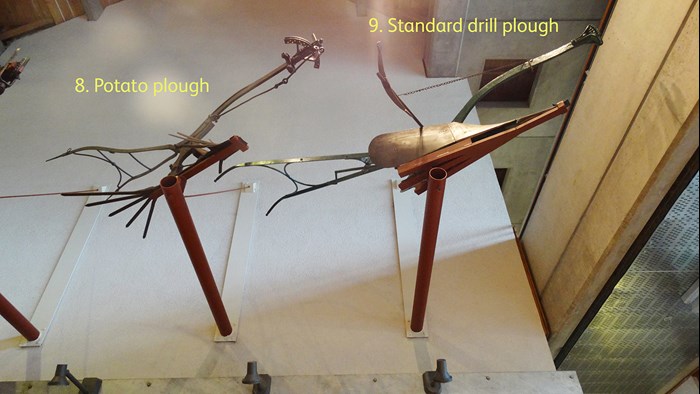 From the mid-1800s, there was enormous change in plough development. Some horse ploughs were replaced by arguably more efficient steam units with large multi-furrow balance ploughs. These ploughs were pulled by cable up and down fields, with only the sound of a steam whistle to indicate a change in the ploughing direction. 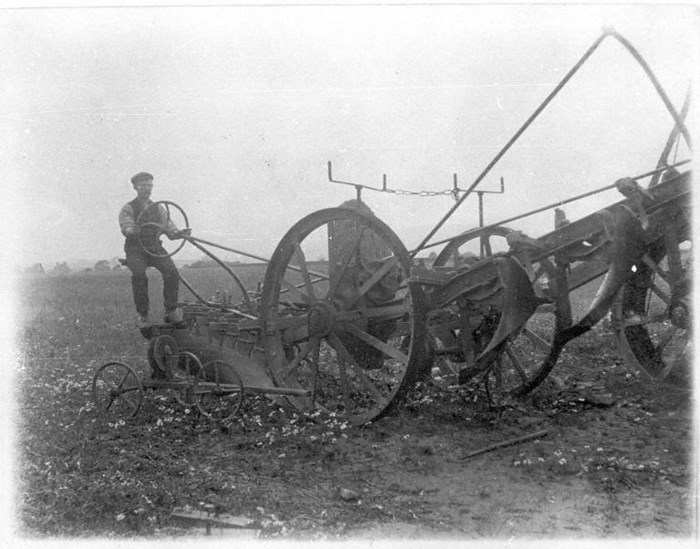 And along came tractors

Using converted horse ploughs, the more manoeuvrable wheeled tractor slowly took over from horse and steam in the early 1900s and was the start of the modern system we are familiar with today.  In the 1920s when Harry Ferguson’s 3-point linkage appeared it totally revolutionised implement attachment, machine control and performance.  The system of attaching an implement to a tractor is now universally used throughout the agricultural industry. 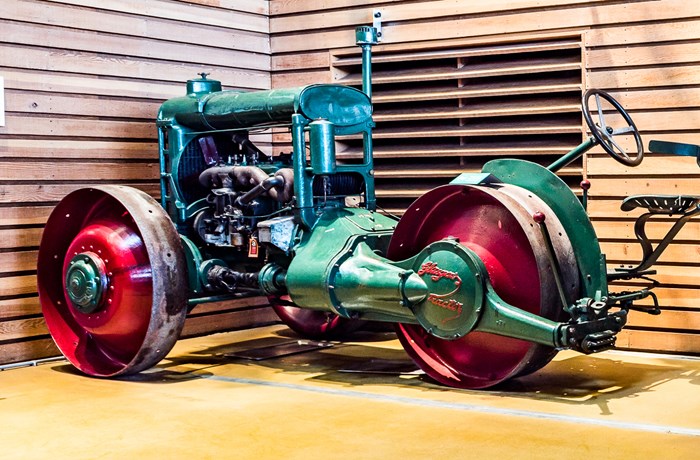 Above: Glasgow tractor from the 1920s on display in the Tools Gallery at National Museum of Rural Life.

Find out more about our tractors in the collection here.

Plough developments since the 1950s

There have been major changes to ploughing machinery since the 1950s and 1960s to cater for the needs of modern farming. In the UK, for instance, the conventional plough has been superseded by the reversible plough because of its simplicity of use and ability to produce level fields. Larger and wider farming implements are being used, sprayers, combine and sugar beet harvesters to name but a few and they would not perform well if the cultivated land was not level.

Other changes made include developments in the reversing mechanism, larger wheel settings, increased furrow width and stronger frame design to withstand the demands of modern ploughing.

Ploughing matches have become an important part of the farming year. Held since the development of the swing plough in the latter part of the 18th century, they continue to this day all over the UK using traditional horse pulled ploughs and those pulled by tractor. Indeed, The Society of Ploughmen’s objective is to:

“
promote and encourage the art, skill and science of ploughing the land.

We conclude the story of the plough with the familiar phrase ploughing on:

“
To move, progress, or develop at a slow but constant and deliberate pace, especially that which is menial, time-consuming, or tedious

After 4,000 years, this essential tool of farming is still with us and no doubt will be in years to come. Its development has been at a slow and steady pace but the essential technology of the plough in preparing the land for crop cultivation has remained constant.