Our Science and Technology collection encompasses a vast range of objects, from tiny microchips to Concorde. Discover an object at the larger end of the scale, the classic Ruston steam excavator, and find out how our conservation team restored it to its former glory.

Ruston and Hornsby of Lincoln

Even Donald Duck has had a go at operating a steam shovel - here he is involved in a steam shovel fight in the 1949 Christmas comic book story 'Letter to Santa'.

What is a steam excavator?

Steam excavators, also known as steam shovels, are large machines that are designed to excavate, lift and move material such as soil for engineering purposes.

Steam excavators were invented in 1839 by the American inventor William Otis. They became extremely popular among Public Works, contractors, drainage commissioners, quarry and mine owners throughout the world during the late 19th and early 20th centuries. 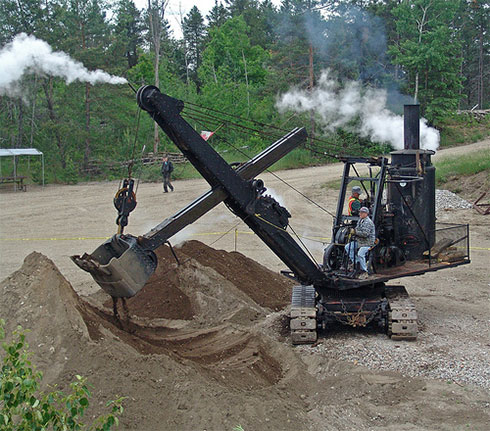 The Ruston and Hornsby No.6 steam excavator

The Ruston & Hornsby No.6 steam excavator is a particularly unique example. It was available in two models, a dragline excavator, or a crane navvy. A dragline escavator has a bucket suspended and controlled by a rope and cuts the ground towards itself, whereas a navvy (as pictured above) has a more rigid shovel mechanism, which works on a hinged lever system and cuts the ground away from itself.

Either version of the No.6 excavator could be fitted with the option of railroad wheels, road wheels, or caterpillar tracks. It was a universal machine that could be quickly converted for various civil engineering jobs, functioning as a grabbing crane, pile driver, dragline, or a shovel. Its main appeal however, was its ability to excavate below its own level, whilst other rival models struggled or simply failed to manage this.

Approximately 350 No.6 Excavators were produced between 1914 and 1932, and were bought by companies from all around the world, from Australia to Russia. These were all produced by the Lincoln engineering firm Ruston & Hornsby, who became renowned for their manufacture of excavators amongst other types of industrial machinery. They prided themselves on the quality of the machinery they made, and accordingly used particular production methods to ensure high standards. This included a purpose built excavator testing ground, where every finished excavator was test driven before it was handed over to the customer. 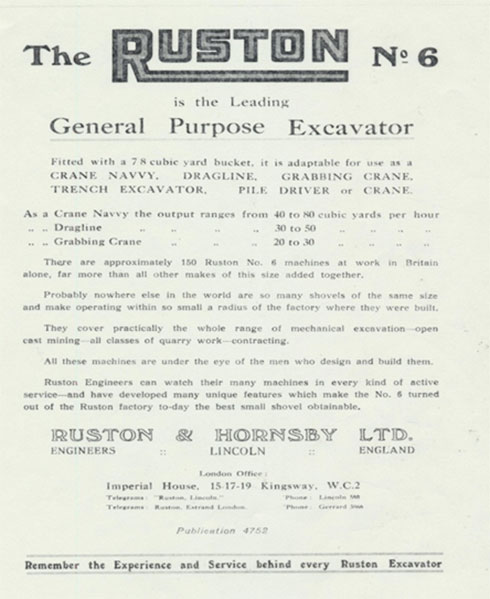 Above: Advertisement for the Ruston No.6, circa 1920s. 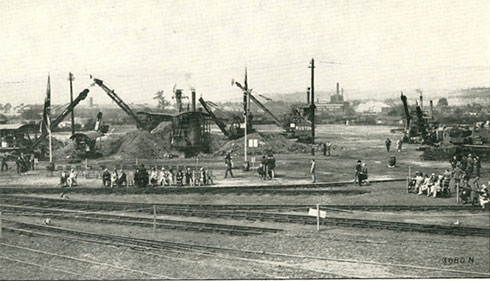 Above: View of the Ruston excavator test ground. Image courtesy of Lincolnshire Archives.

The History of National Museums Scotland’s No.6 Excavator

The No.6 excavator housed by the National Museum of Scotland is considered to be the only one of its kind in Scotland, and is believed to be only one of two that remain in existence within the UK. This particular model was built as a crane navvy with caterpillar tracks, which would have made it ideal for working on sites with deep ledges and uneven surfaces. It has a jib of 35 feet, a bucket capacity of 6-7 metres, and its weight in working order is approximately 25 tons. 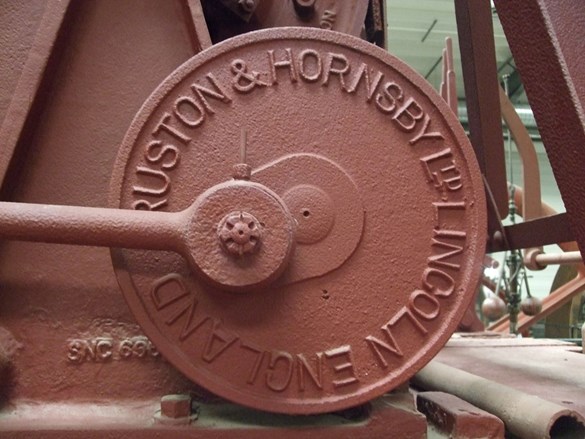 Above: Detail of the No.6 excavator.

Built in 1926, the No.6 was purchased by the Civil Engineering contractors Murdoch MacKenzie Ltd of Motherwell, to work on the Glasgow to Edinburgh road (the A8). It was used until 1958 and then remained at the Company’s depot near Carluke. This was due to the goodwill of the owner, who had a personal appreciation for industrial history and intended to renovate the No.6. However the No.6 sat unattended at the depot until 1984, when it was acquired by the National Museum of Scotland.

The task of arranging the move and storage of this object was a major project, and took a total of 453 hours to complete.

Due to the large size of the excavator it was necessary to have it dismantled for transit, and then reassembled at the other end. Large cranes and haulage trucks were used to carry out this work.

Once positioned in its new home, conservation work began. After years of disuse and exposure to the elements, the excavator was extremely dirty and had a major rust problem.

To remedy this, a process known as Waxoyling was used. This technique is often used to restore classic cars. Waxoyling requires the existing rust to be removed first, followed by an application of a rust-preventative fluid known as Waxoyl. This works by excluding water and air from bare metal and by slowing the progress of existing surface rust using phosphoric acid rust inhibitors.

Unfortunately complete restoration of the excavator was not possible. The roof canopy was missing when the N0.6 was acquired. Originally it would have had a cab with doors and a corrugated iron roof. 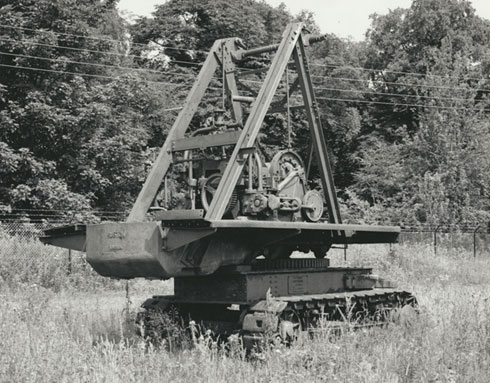 Above: The Ruston excavator before conservation.

Today the No.6 Excavator is stored at the National Museums of Scotland Collection Centre. Although in storage, it is clearly prominent amongst the other large objects that surround it, and can still be viewed during public tours. 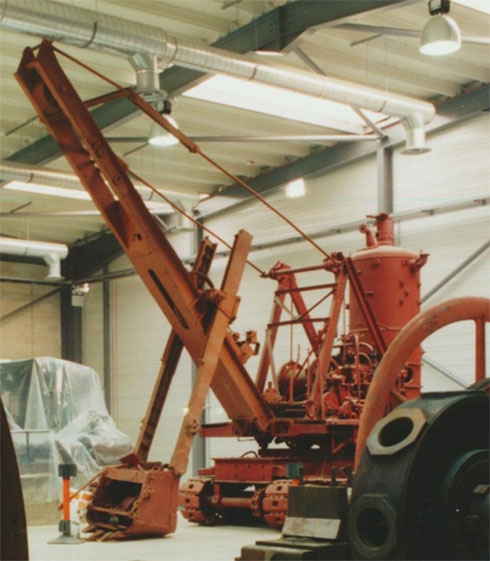 Above: The Ruston excavator in the National Museums Collection Centre.

The steam excavator in popular culture

Though obsolete as working machines today, having been replaced by cheaper diesel powered excavators in the 1930s, great affection for steam excavators still continues. There are a number of restored and preserved excavators owned by industrial museums and private collectors. There is also certain popularity for these machines through the media of cartoons and books. First published in 1939, Mike Mulligan and his Steam Shovel, written and illustrated by Virginia Lee Burton, tells the story of a steam shovel operator and his steam shovel, Mary Ann. The Thomas the Tank Engine series features a steam shovel called Ned, whilst steam shovels also appeared in Disney cartoons and comic books. 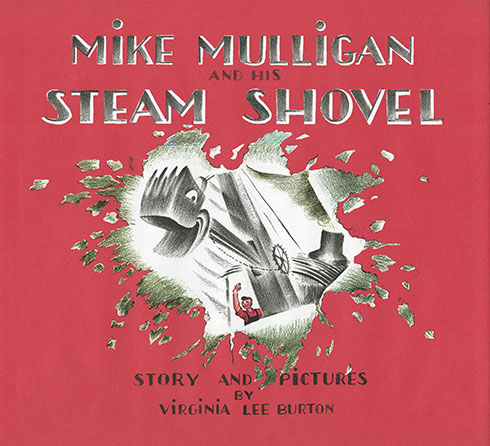