Behind this frightening-looking mask, worn as a disguise by the outlawed Covenanting minister Alexander Peden, lies a fascinating story of rebellion and religious conviction.

The mask is made from leather and fabric. The beard and wig are probably made from real human hair. There are also some feathers and false teeth attached.

The mask was discovered in the 1840s, in a cottage near Cumnock. The mask and wig, along with his sword, had been handed down through his family for generations. 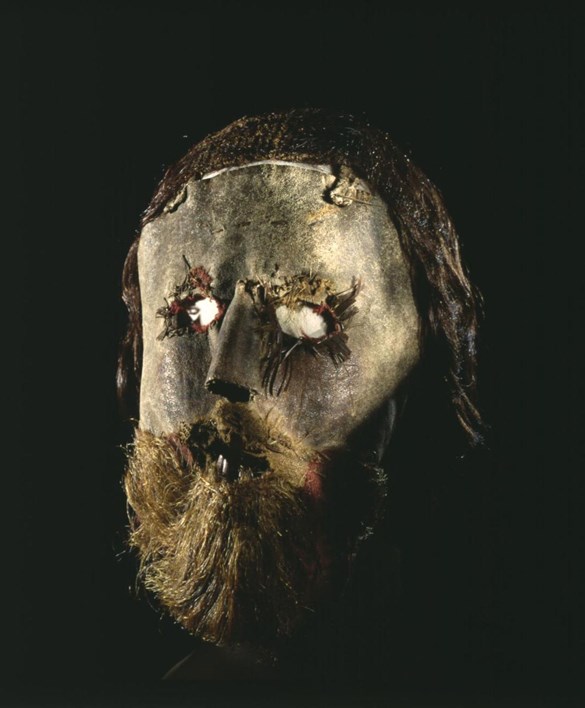 Who were the Covenanters?

‘Covenanter’ was the name given to the people of Scotland who signed the National Covenant in 1638, in opposition to religious and political policies introduced by Charles I. You can see this historic document in the National Museum of Scotland, just a few yards away from Greyfriar’s Kirk, where it was first signed on 28 February 1638. 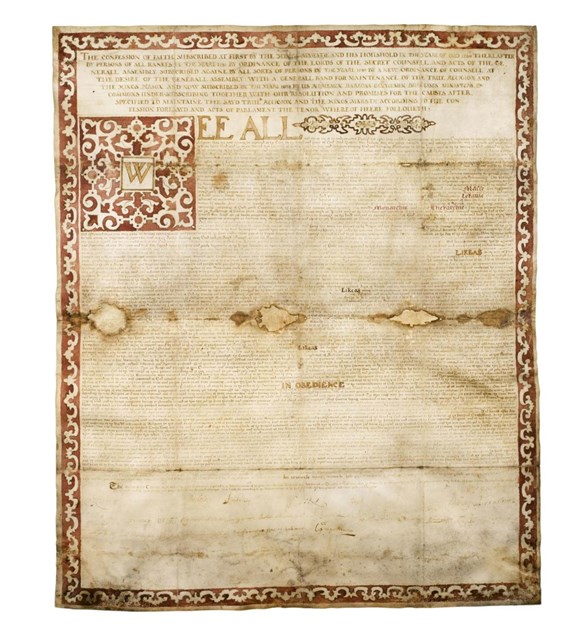 Above: The National Covenant can be seen in the Kingdom of the Scots gallery in the National Museum of Scotland.

The Covenant was a pledge or contract between the Scottish people and God to uphold Presbyterian values. This included the refusal to accept the King as the spiritual head of the church in Scotland: the Covenanters believed that Jesus Christ was the head of the church. The Covenant also rejected the hierarchical nature of the Episcopalian system of church government, which was ruled by bishops. Presbyterians believed that the church should be governed by presbyteries, a church court run by church elders selected from each congregation in a geographical area. Most importantly Presbyterians believed that ministers should be chosen by their congregations.

For Charles I, this attitude was treasonous, and he declared war on the Covenanters. This war would bring about his downfall: in need of funds to pursue the war, Charles was forced to recall Parliament after almost 10 years of ruling alone. The subsequent deadlock between King and Parliament resulted in civil war across England, Scotland and Ireland. 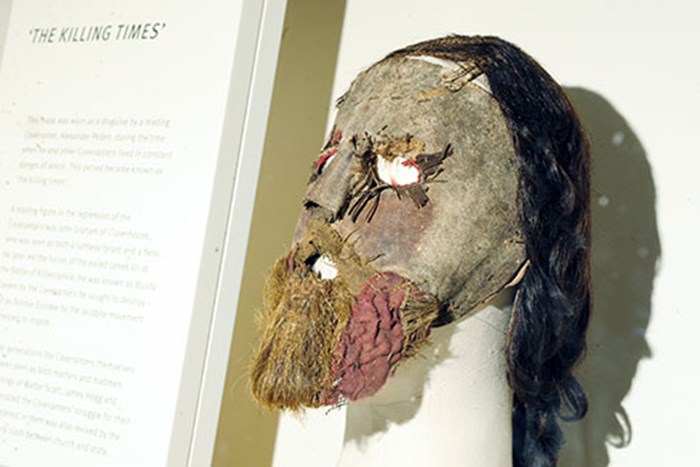 Above: Alexander Peden’s mask, on display in the Kingdom of the Scots gallery at National Museum of Scotland.

In 1660, Charles II was restored to the throne. In return for assistance from the Covenanters, he had reluctantly signed the Covenant. Yet in 1662 the new King renounced his promise and declared himself the head of the Scottish Church.

A period of persecution followed, in which some 350 ministers with Covenanting sympathies were forced from their churches. Rather than suffer the imposition of the hierarchy of the Episcopalian system, they became outlaws, continuing to fight their cause.

Many began preaching illegally at open air services known as ‘coventicles’ – a practice that became punishable by death under Charles’s new laws. Covenanters were hunted down by government troops, imprisoned, executed or transported to the colonies. All Scots were force to take an oath renouncing the Covenant. Anyone who refused to do so could be shot. Many chose to die rather than renounce their beliefs. This bloody period became known as ‘the Killing Times’.

Who was Alexander Peden? 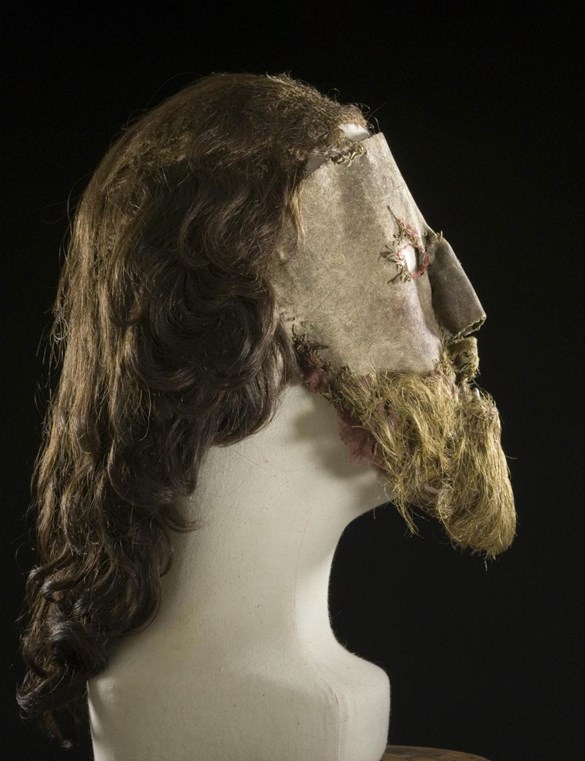 Above: Alexander Peden's mask and wig from the side.

This mask was worn as disguise by one of the Covenanters’ most charismatic preachers, Alexander Peden (1626-1686). ‘Prophet Peden’, a minister from Ayrshire, was an outlaw who preached illegally against the changes imposed by Charles II and encouraged his followers to defy them. Most of his preaching was done in the south and west of Scotland. When not preaching he would travel between sites, sleeping in caves and shelters to avoid recognition and capture.

After 11 years on the run, he was captured and imprisoned for four years on the Bass Rock in the Firth of Forth – the Scottish Alcatraz. Yet plans to exile him to a plantation in Virginia in America backfired when he jumped ship and escaped to Ireland. He then returned to Scotland, where he continued to preach throughout the Killing Times. His final days before his death at the age of sixty were spent living in a cave, yet he died a free man. He was buried in Auchinleck churchyard, in East Ayrshire.