In 2014 Scotland welcomed the Commonwealth Games to Glasgow. Objects from our collection give an insight into the history of the games.

Scotland and the Commonwealth Games

Scotland first hosted the Commonwealth Games in Edinburgh in 1970 then held them again in 1986, making Edinburgh the first city to host the games twice. The initial campaign to hold the games in Scotland spanned several decades, starting in the 1930s. The postponement of the games during the Second World War thwarted hopes for Scotland to act as the host nation in 1942, however the campaign was taken up again in the 1950s.

When the games eventually came to Edinburgh in 1970 they were a great success. 1744 athletes attended from 42 commonwealth nations. The 1970 games made history by being a year of firsts. Photo finish technology was first introduced in this year and it was the first time a completely metric system was used for athletics and swimming. Notably it was also the first time the Queen herself attended the events.

On display in Scotland: A Changing Nation is the 1970 games baton used to carry the Queen's address to the opening ceremony. In the week prior to the opening of the games, the baton made its way around Scotland finally ending up at Meadowbank Stadium where it was received by the Duke of Edinburgh. The baton relay in 1970 was the only relay in the history of the games to start outside of the United Kingdom, beginning in Yellowknife in Canada rather than at Buckingham Palace.

Above: Baton of the 1970 Commonwealth Games used to carry the official greeting of Queen Elizabeth to the opening of the games.

A competition was held by the Royal College of Art to find an artist to design the baton. The winner was Hector Miller who was a student at the time. The design of the baton is intended to represent the shape of two thistles joined in the centre by a chain, a symbol of the Commonwealth Games. Inset at one end of the baton is the arms of the city of Edinburgh with the logo of the Commonwealth Games at the opposite end 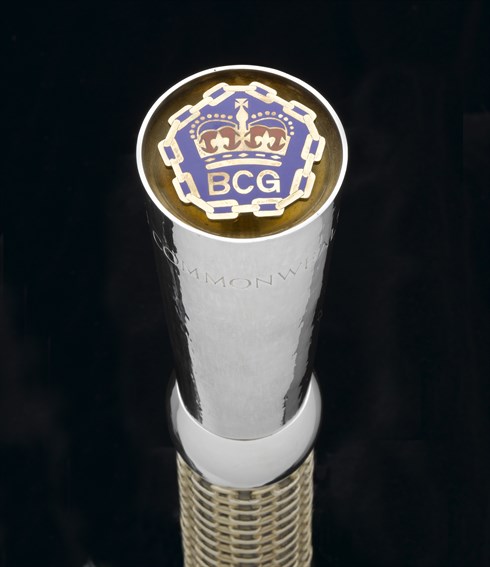 Above: The design of the baton emulates the shape of two thistles joined with a linked chain in the centre which was a symbol of the British Commonwealth Games.

Another object in the collection also from this year is a booklet produced by the Bank of Scotland and the British Linen Bank. This booklet is a guide to Edinburgh for visitors and includes information on the history of the games, records held by medal winners and recommendations for places to visit in Edinburgh and across Scotland. The illustration on the cover of the book sets the events firmly in the city by portraying famous landmarks. Like the official poster, Edinburgh Castle is depicted as well as the Scot Monument, the Nelson Monument and the National Galleries of Scotland. 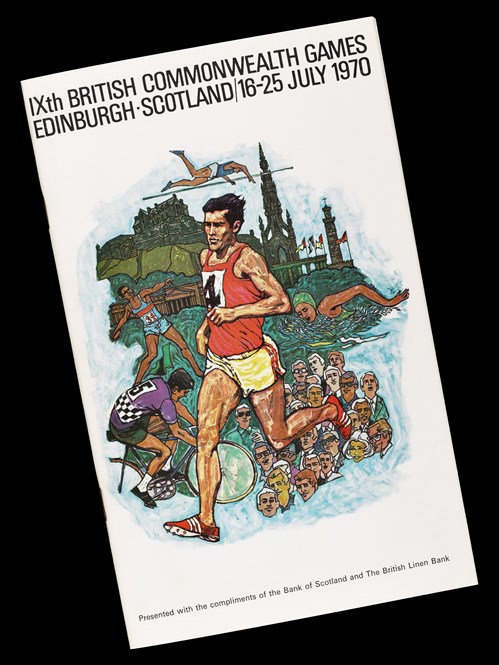 Above: Booklet produced by the Bank of Scotland and the British Linen Bank for visitors to Edinburgh during the IXth Commonwealth Games in 1970. The booklet contains information on the venues, record holders and history of the games while also recommending places to visit across Scotland.

One of the most interesting pages in the booklet shows illustrations of the new facilities built to house the various sporting events in 1970. Meadowbank Stadium depicted on the bottom right of the image below, was built to accommodate athletics, fencing and wrestling as well as having a dedicated velodrome for the cycling events. The capacity of the stadium was 30,000 with additional seating especially constructed for the games. It was here that crowds would cheer on Scottish competitors such as Lachie Stewart, who won gold in the 10,000 metres. 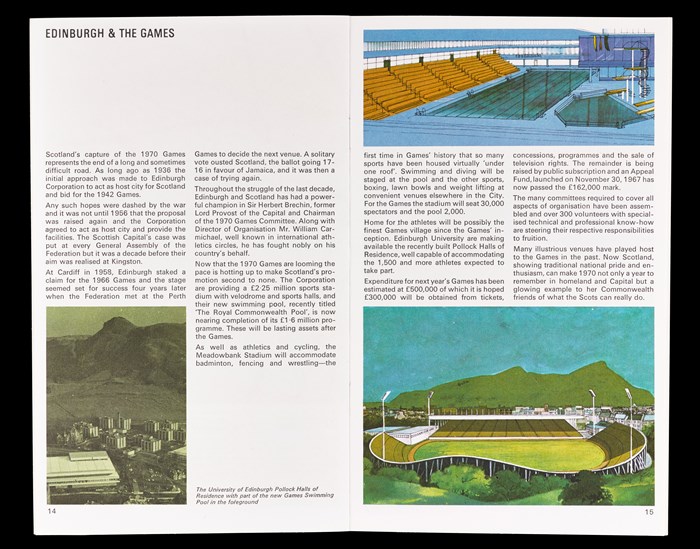 The Royal Commonwealth Pool, also illustrated in the booklet was built for the games, costing £1.6 million to complete. In this venue the Scottish team celebrated success in swimming, with David Wilkie winning a bronze medal in the 200m breaststroke.

The infrastructure built had a lasting impact on the host city of Edinburgh; the sporting venues were used again to host the games in 1986 with the Commonwealth Pool also used in the Glasgow 2014 Games.

Over the years the museum has been collecting objects to document the impact that the Commonwealth Games has had on Scotland. Some of these objects can be seen in Scotland: A Changing Nation. Currently on loan to the museum are medals won by Scottish athletes, including a gold medal and bronze medal won by Sir Chris Hoy. 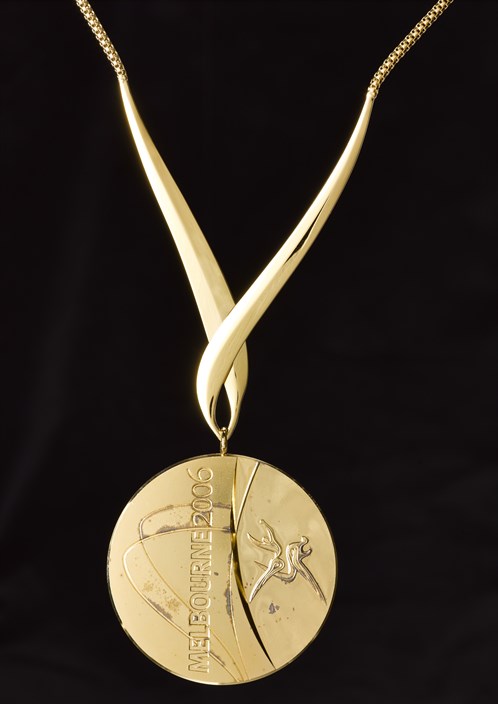 Above: Gold medal won by cyclist Sir Chris Hoy at the 2006 Commonwealth Games.