Discover the story of Scotland's failed venture to colonise part of Panama in the 17th century.

Gifted by the Governor and Company of the Bank of Scotland

Of the 2,500 Scots who left for Panama, only a few hundred survived the failed colonisation attempt.

What is the Darien chest?

The late 1690s were a difficult time for Scotland’s economy. This chest was used to store money and documents associated with the Company of Scotland, a trading company set up in 1695 with the power to establish colonies.

It is now remembered for the disastrous venture to establish a trading colony in the isthmus of Darien in today’s Panama in 1698. This failure cost 2,000 lives and lost Scotland a quarter of its liquid capital. The loss of such a huge amount of capital helped to push Scotland towards an incorporating union with England. 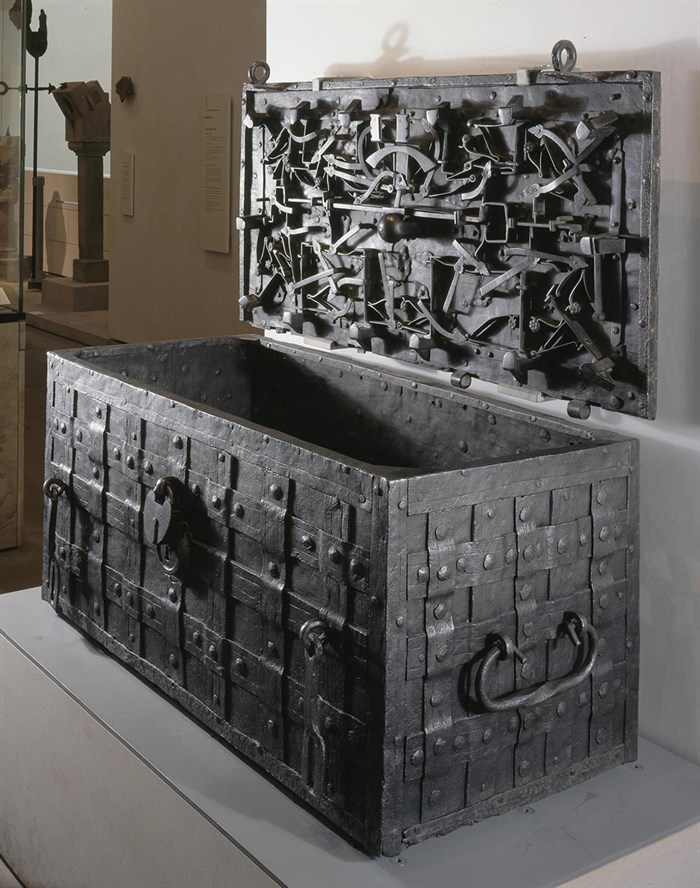 The late 17th century was a difficult period economically for Scotland. The economy was relatively small and its range of exports limited, and furthermore Scotland was in a weak political position in relation to the great powers of Europe.

In response to this, a number of remedies were enacted by the Parliament of Scotland. In 1695 the Bank of Scotland was established and the Company of Scotland was chartered with capital to be raised by public subscription to trade with "Africa and the Indies".

In attempts to expand, the Company of Scotland soon became involved with the Darien Scheme, an ambitious plan devised by William Paterson to establish a colony on the Isthmus of Panama in the hope of establishing trade with the Far East, thus avoiding the treacherous journey around Cape Horn.

The first expedition of five ships set sail from Leith on 14 July 1698. Their orders were to "proceed to the Bay of Darien and make the Isle called the Golden Island...some few leagues to the leeward of the mouth of the great River of Darien...and there make a settlement on the mainland". The fleet finally made landfall on 2 November 1698. 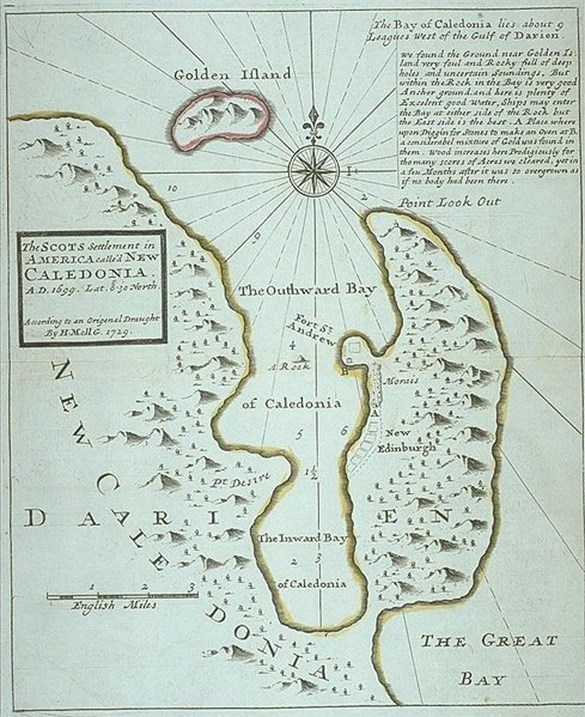 Above: Map of New Caledonia in Darien.

The settlers constructed Fort St Andrew as the main defence, built a warehouse and began to erect huts of the main settlement, New Edinburgh. Agriculture proved to be difficult and local tribes, although friendly, refused to buy combs and trinkets offered by the colonists.

With the onset of summer the following year, the stifling heat added to other causes and there were a great many deaths. In July 1699, after barely eight months the colony was abandoned. Only 300 of the 1,200 settlers survived and only one ship managed to return to Scotland.

Word of the disastrous first expedition did not reach Scotland in time to prevent a second voyage of more than 1,000 people leaving Scotland.  The second expedition arrived on 30 November 1699 to find the settlement of New Edinburgh abandoned, deserted and overgrown.

The fear of being driven out by the Spaniards led them to attack the Spanish fort at Toubacanti in January 1700. The Scots were then subjected to sustained attacks at Fort St Andrew for a month before surrendering, and were afterwards allowed to leave. Of the 2,500 settlers that set off from Scotland to, just a few hundred survived.

The failure of the Darien Scheme has been cited as one of the key reasons why, despite their misgivings, the Scots accepted the 1707 Act of Union. Many in the Scottish political classes realised that if Scotland was to become a major trading power then any future commercial development could only be realised with unimpeded access to England’s colonies and free trade between the two neighbouring nations.

The Scottish economy had been severely damaged by the "Darien Fiasco" and Westminster had been petitioned by Scotland to wipe out the Scottish national debt and stabilise their currency. The 1707 Act of Union granted an "equivalent" of £398,085 10s to Scotland, partly to offset future liability towards the English national debt and as a compensation for losses incurred through the Darien venture.