Uncover the history of this iconic Celtic trumpet, and find out how it has been reconstructed to bring the music of the past to life.

The Romans found the carnyx so distinctive, they used it as a symbol of the tribes they encountered.

Bronze and brass with wooden tongue and enamel eye inserts

The carnyx is still used to denote Celtic tribes in modern culture. For example, it appears in films such as Gladiator, Centurion and Brave. 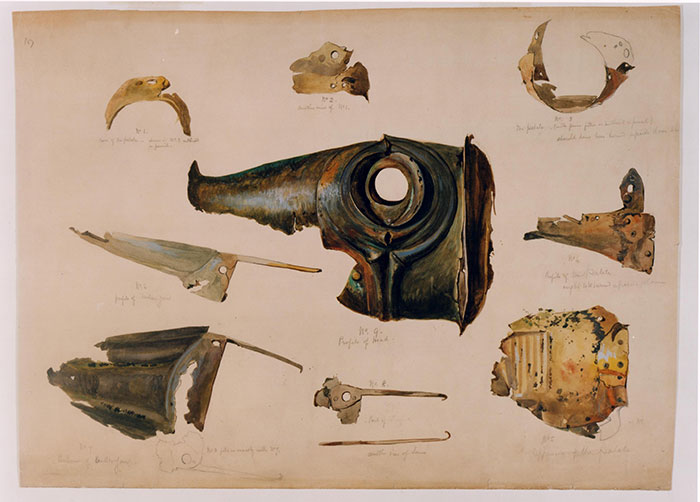 Above: Watercolour of the carnyx painted about fifty years after it was found.

The Deskford carnyx is the head of an Iron Age trumpet. Found in the north-east of Scotland around 1816, it is a masterpiece of early Celtic art, shaped to resemble a wild boar with its upturned snout and decoration mirroring the folds of skin around a boar’s face. It is a complex composite construction, wrought from sheet bronze and brass. This helps us date it, because brass is not native to Scotland: it represents recycled Roman metal. Along with other evidence, this suggests a date between c. AD 80 and 250 for its construction. Today only the head survives: it lacks the erect crest, ears, enamelled eyes, wooden tongue and long cylindrical tube which it once had. For evidence of these we must turn to other examples.

The carnyx was once widespread throughout much of Europe, although only a dozen or so fragments are known to us. It flourished between 300 BC and AD 200 in western and central Europe and beyond. Bands of Celtic mercenaries took it on their travels; carnyces were present at the attack on the Greek sanctuary at Delphi in 279 BC; carnyces defied Julius Caesar in Gaul; carnyces faced Claudius when he invaded Britain. They are even shown on a Buddhist sculpture in India, proof of the far-flung connections of the Iron Age world. Yet they are not a purely Celtic instrument: they were also used among the Dacians, in modern Romania. “Celtic” is a complicated term. The idea of a pan-European Celtic culture is a myth: instead, aspects of art and technology were shared over wide areas among diverse cultures. The carnyx was one example of this.

The carnyx can only be understood in this international context. It is to Europe and beyond that we turn for parallels. Yet this is a specifically Scottish variant. The decoration is typical of metalwork in north-east Scotland at the time, where there was a flourishing tradition of fine bronze-working.

The local context can also help us understand the fate of the Deskford carnyx.

What is the story of the Deskford carnyx?

The minister of the parish at the time of the carnyx’s discovery records it was found at the bottom of a peat moss. Excavations by the National Museum of Scotland in the 1990s examined this findspot. This showed that the carnyx ended its life as a sacrifice, a votive offering to some unknown god. 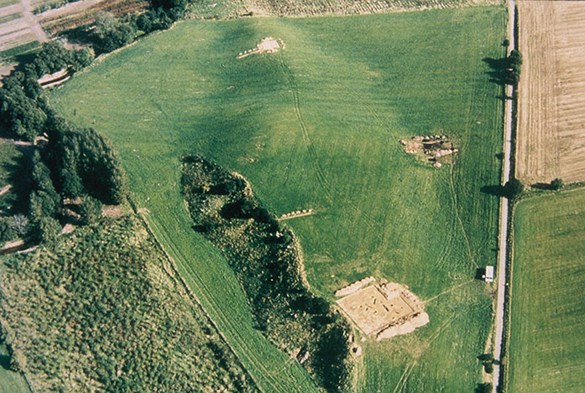 Above: Aerial view of the site in Deskford where the carnyx was found. Image © Aberdeenshire Aerial Surveys.

There was a widespread belief in the Iron Age that wet locations were sacred places where you could contact the gods. Valuable finds often occur in peat bogs as gifts to win a deity’s favour. Deskford produced evidence of a series of offerings made in pits cut into the peat: smashed pottery, joints of meat, and a cache of charm-stones. These are the offerings of the everyday, the tokens of a farming people asking their gods for good weather or thanking them for a fine harvest. 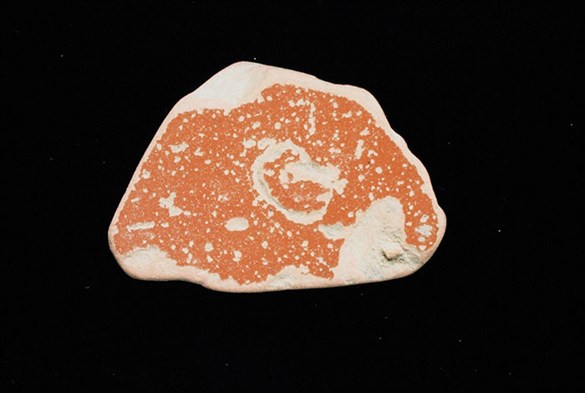 Above: Piece of Roman samian pottery found at Deskford.

The carnyx was more than this: it must have been a spectacular sacrifice, at a time of great danger or great celebration. Before being offered to the gods it was “killed” by dismantling it; perhaps only the head was placed in the bog. It seems an appropriately grand end for such a fine piece of craftsmanship.

How was the replica carnyx created?

The impetus for the research into the carnyx came from Dr John Purser and his desire to build a new carnyx to bring the music of the past alive. With funding from the Glenfiddich Living Scotland Awards, the Hope-Scott Trust and the National Museum of Scotland, this was carried out by John Creed. The missing parts were reconstructed from parallels elsewhere in Europe. 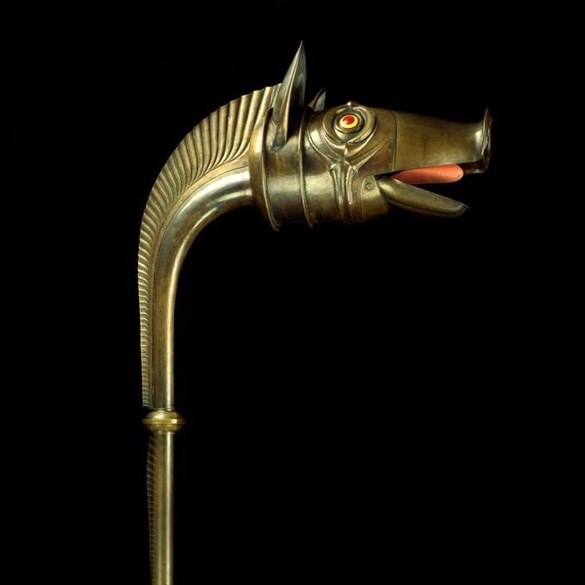 Above: Reconstruction of the Deskford carnyx created by John Creed.

Although surviving examples are few, there are many depictions of carnyces, especially on Roman triumphal sculpture and coinage: the legions encountered it in battle, and thought it so strange that they used it as an emblem of the tribes they fought. This gives us a wide range of comparative material. Some elements are inevitably speculative: the original length and diameter of the tube, for instance, is unknown, although the dimensions fall within the known range. However, the reconstruction is as accurate as we can make it on current knowledge.

What did we learn from reconstructing the carnyx?

We learned that a combination of archaeology, craftsmanship and music is a powerfully creative one in deciphering such fragments. We learned about the effort involved in making these instruments – it took four hundred hours to craft the reconstruction, showing what prized possessions they must have been. And we know something of what it sounded like. A reconstruction can never recreate the sounds of the past: apart from imponderables in the instrument design, we know nothing of Iron Age views of music. However, musician John Kenny has shown what could have been played on such instruments, and the possibilities are greater than anyone could have believed. It makes a fitting tribute to the craftsmen and musicians of almost 2000 years ago.

In this film, John Creed explains how he constructed the replica carnyx.

The voice of the carnyx

In this film, musician John Kenny explores the unique sound of the carnyx.

Secrets of the carnyx

John Kenny compares the Deskford carnyx to a very different carnyx discovered in Tintignac in France.