This canine cranium was one of 24 dog skulls found in a Neolithic passage tomb – the so-called 'tomb of the dogs' – at Cuween Hill in Orkney. Remains of at least eight people, along with other dog bones and those of cattle, were also found there when the tomb was excavated in 1901. This is the only dog skull to have made it into a museum; the others are believed to be lost.

Above: You can explore the Cuween passage tomb in this 3D model created for Historic Environment Scotland by Hugo Anderson-Whymark.

This was the only one of the dog skulls to survive – but what can it tell us about its owner?

To find out more, the skull was radiocarbon-dated. The result showed that it was buried around 4,500 years ago, around 500 years after the passage tomb had originally been built.

Next, faunal osteologist Dr Robin Bendrey at the University of Edinburgh examined it and the other surviving dog bones from Cuween, and was able to say that they belonged to dogs around the size of a large collie.

After that, the skull was CT-scanned by staff in the Diagnostic Imaging Service at Edinburgh University’s Royal (Dick) School of Veterinary Studies – although they hit a snag when they needed to record the patient's age, as their system only goes up to 999!

From the CT-scan, Dr Tobias Schwarz was able to say that the dog had been 2–3 years old, and had crunched lots of bones, to judge from his tooth wear.

The skull was also laser-scanned and 3D printed at Historic Environment Scotland’s Engine Shed in Stirling, and a 3D photogrammetric model was made by Richard Allen at the University of Oxford. 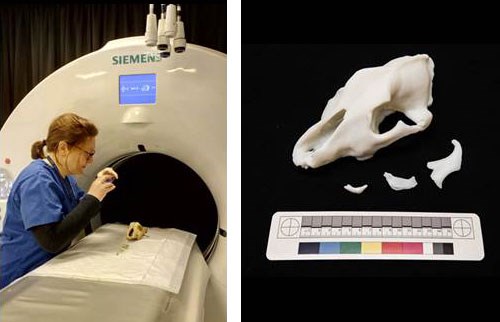 Above: The skull is CT-scanned by Titziana Liuti at Edinburgh University’s Royal (Dick) School of Veterinary Studies (left). 3D print of the skull from a laser scan (right).

Above: 3D photogrammetric model the skull made by Richard Allen.

So this dog was very old and pretty big – but what did it actually look like?

To find out, the 3D print of the skull was sent to Amy Thornton, a forensic artist who studied at the Centre for Anatomy and Human Identification at the University of Dundee.

Facial reconstructions have often been made of historical figures, such as this 3D model of 'Ava', an Early Bronze Age woman from Avanich in the Highlands. 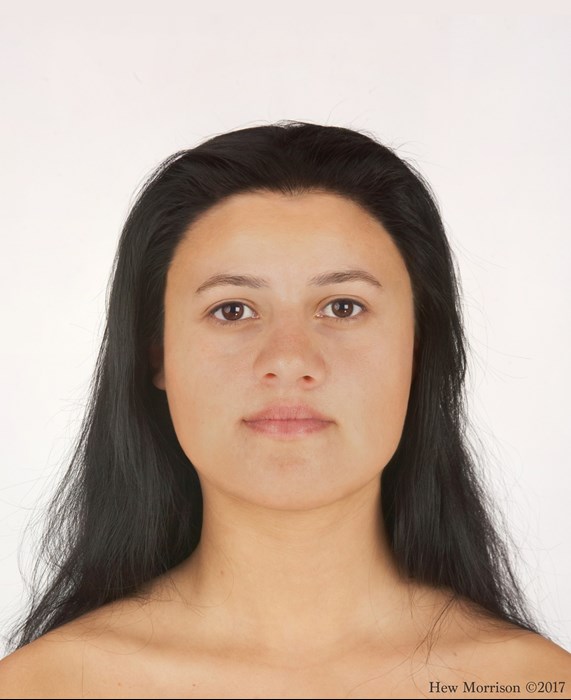 Above: Reconstruction of ‘Beaker’ woman from Achavanich, Highland, by Hew Morrison. From Proceedings of the Society of Antiquaries of Scotland Vol. 147 (2017). © Hew Morrison. 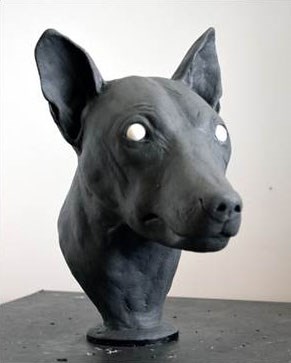 Above: This image shows how Amy built up the basic shape of the face.

However, this was the first time that a facial reconstruction of a Neolithic dog had been tried.

With past experience creating a werewolf ‘reconstruction’, Amy was well qualified for the job. 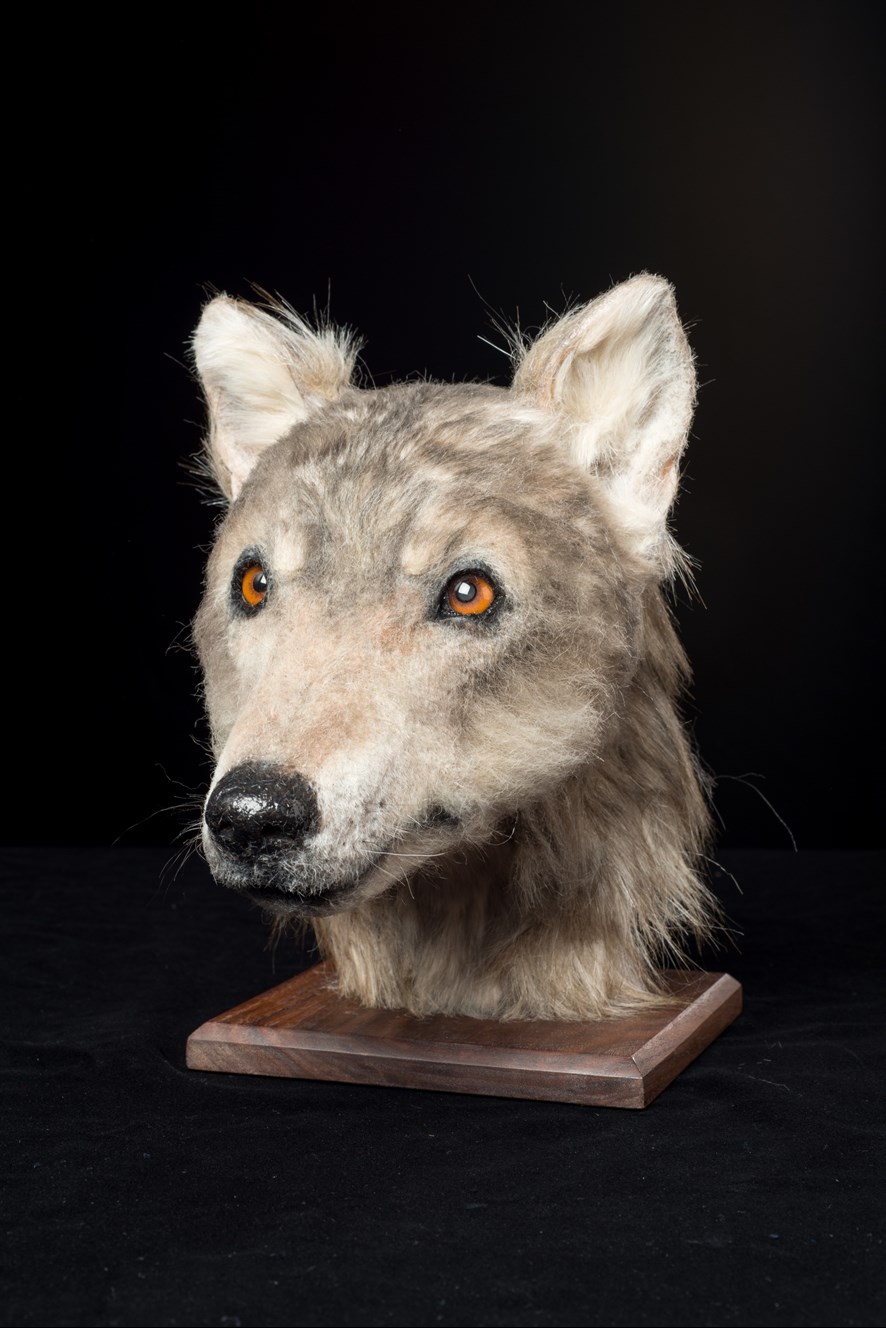 Above: The completed reconstruction. Although it would have been a domesticated dog, its features are reminiscent of the European grey wolf. © Historic Environment Scotland.

This research was commissioned by Historic Environment Scotland, in partnership with National Museums Scotland, as part of their plans to replace the visitor information panel at Cuween Hill chambered cairn. 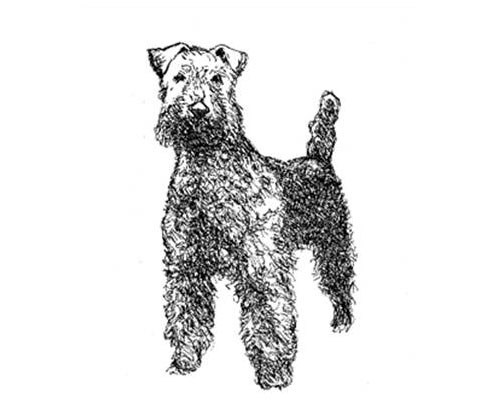 Above: The previous image resembled a terrier, whereas now we know that it was a much larger, more impressive dog. © Historic Environment Scotland. 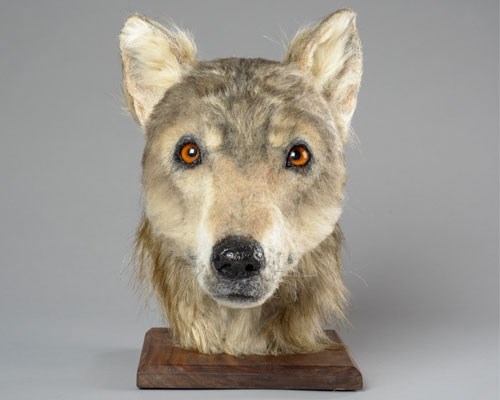 Above: The 'real' face of the Cuween Hill dog. © Historic Environment Scotland.

Comparing the reconstructed dog with the artist’s impression on the previous information panel shows clearly how science and research has brought this ancient dog's true nature back to life.