Novelist, poet, playwright and historian, Scott was one of the most celebrated writers of his time and his works brought Scotland’s evocative landscapes to public attention across Britain and Europe. Discover his story through objects in the National Collection.

“
One hour of life, crowded to the full with glorious action, and filled with noble risks, is worth whole years of those mean observances of paltry decorum.
- Sir Walter Scott

Walter Scott was born in Edinburgh on 15 August 1771. He trained as a lawyer but had always been drawn to writing. His literary interest was initially in the Border ballads, and his first major publication was The Minstrelsy of the Scottish Border (1802–3), a three-volume collection of traditional songs and poems. 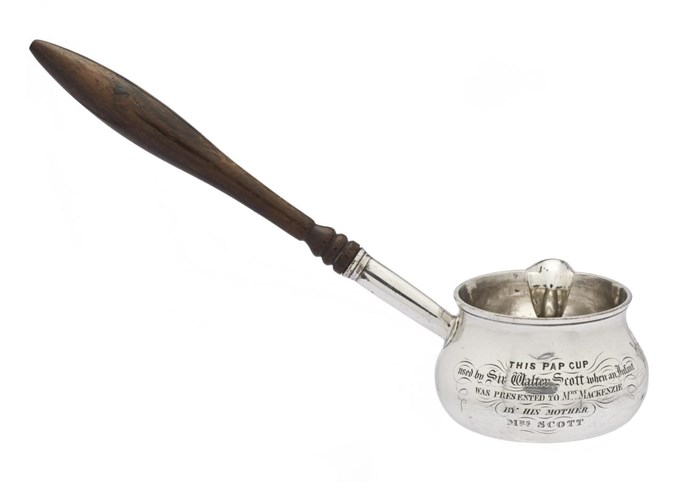 Above: This silver feeding cup was used by Sir Walter Scott when he was a baby, and presented by his mother to a Mrs Mackenzie. You can see it in the Scotland galleries at the National Museum of Scotland. 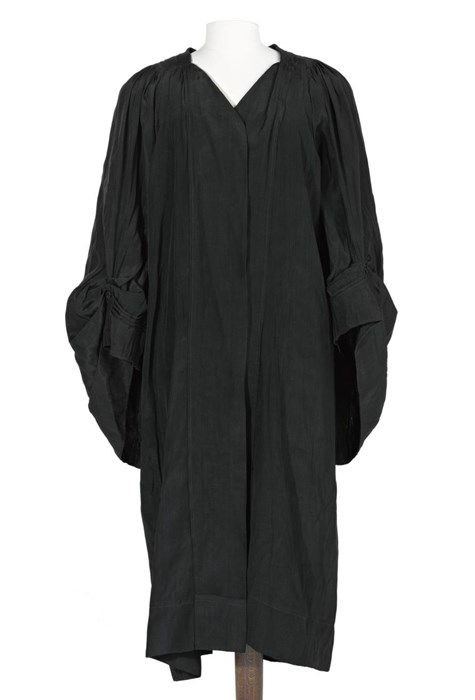 Above: This black alpaca advocate's gown was worn by Sir Walter Scott.

In 1804, Scott and his family moved to a house near Selkirk, in the Borders. Here he wrote his epic poems The Lay of the Last Minstrel (1805), Marmion: A Tale of Flodden Field (1808) and The Lady of the Lake (1810), which proved hugely popular. As fame and fortune beckoned, he began building his country home of Abbotsford, near Galashiels, in 1811.

The Wizard of the North

“
Success or failure in business is caused more by the mental attitude even than by mental capacities.
- Sir Walter Scott 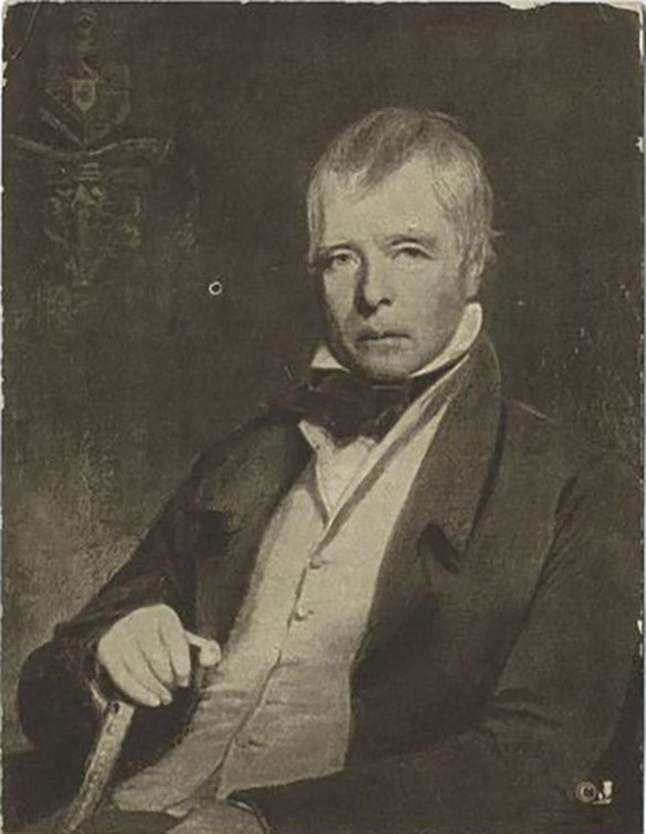 In 1814, Scott published his first novel, Waverley. Set during the 1745 Jacobite rising, it's considered to be the first historical novel – and is also the only novel to have a train station named after it! Waverley was published anonymously, as at the time stories and novels were considered inferior to poetry, and Scott didn't want to damage his reputation. Yet the book went on to be enormously successful, as did his subsequent works.

Based on religious and political conflict and clashes between Scots and English, Highland and Lowland, Scott's novels astutely explored Scottish character and culture, and encouraged a heroic and romantic view of Scotland's past. 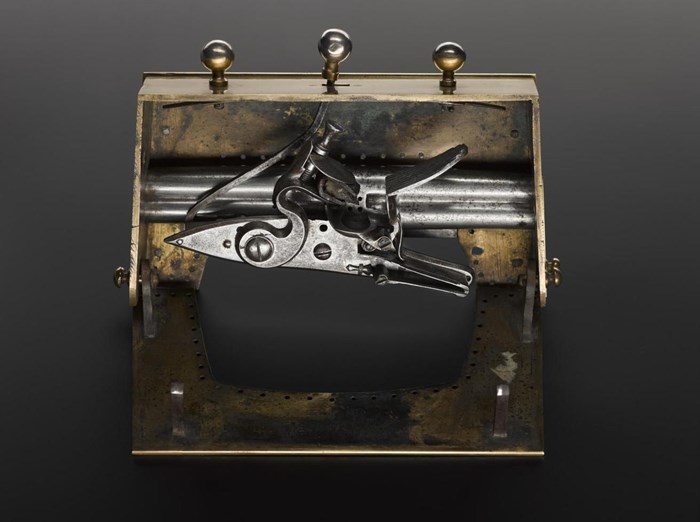 Above: Sporran clasp of brass and steel with four concealed pistols which would fire if the sporran was not opened correctly. This was may have inspired an episode in Scott's novel Rob Roy where the hero's sporran opens by twisting 'one button in one direction, another in another... [when] the mouth of the purse... opened... a small steel pistol was concealed within the mounting... so that the weapon would... [when tampered with]... discharge'. You can read more about Rob  Roy here and see the sporran clasp in the exhibition Wild and Majestic: Romantic Visions of Scotland until 10 November 2019.

Scott became one of the best-known writers in the country, and his influence soon spread to Europe and America. A generous host, he was visited at Abbotsford by writers, politicians, noblemen and many of his readers, including Lord Byron and the composer Felix Mendelssohn. You can find out more about their visits to Scotland in our Wild and Majestic exhibition. 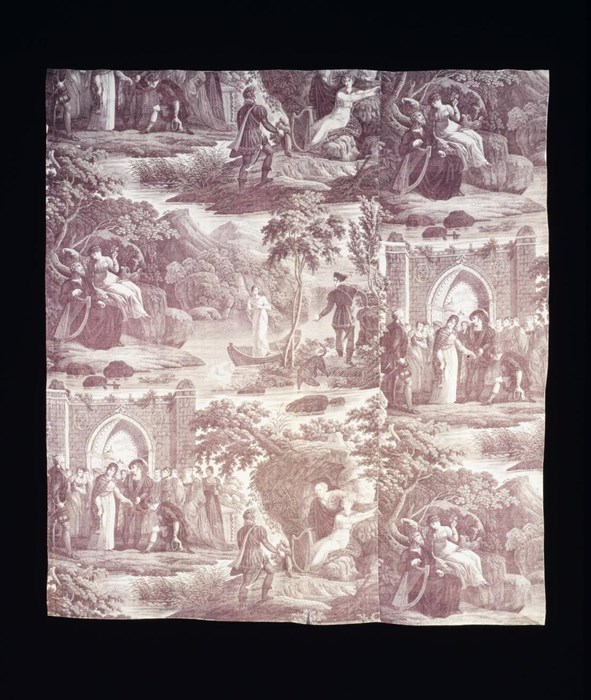 Above: This fabric depicts scenes from Scott’s poem The Lady of the Lake. It was made in Nantes in France by the renowned fabric manufacturers Favre-Petitpierre et Cie in around 1825. By this time Scott was now so popular he was literally part of the furniture! You can see this fabric in the exhibition Wild and Majestic: Romantic Visions of Scotland until 10 November 2019. 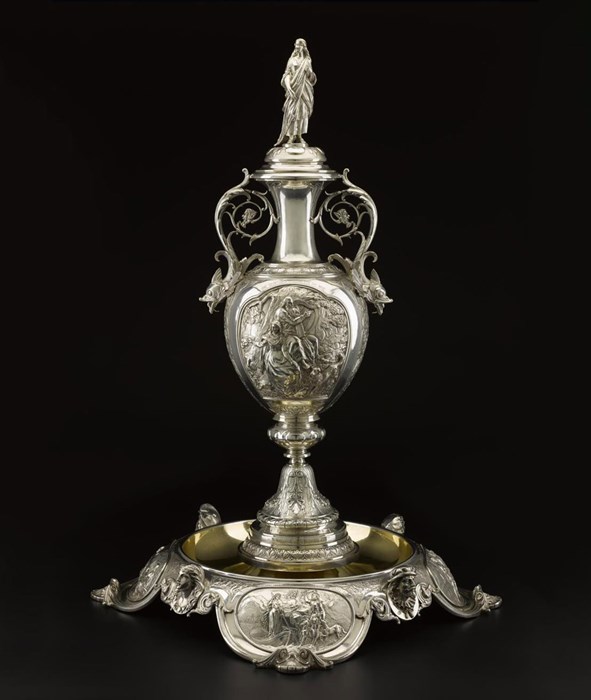 Above: This silver table centrepiece is decorated with scenes from Scott’s epic The Lady of the Lake. It was made in Edinburgh in 1880-1 possibly to mark the 70th anniversary of the poem’s publication in 1810. You can see this centrepiece in the exhibition Wild and Majestic: Romantic Visions of Scotland until 10 November 2019.

In 1820, he was granted the title of baronet by the Prince Regent (later King George IV). This was thanks to his endeavours in 'unearthing' the Honours of Scotland (or Crown Jewels) which were feared lost in Edinburgh Castle.

“
There's nothing so easy to invent as a tradition.
- Sir Walter Scott

In 1822, Scott spearheaded the stage management of the visit of George IV to Edinburgh. The elaborate pageantry that accompanied the event represented the culmination of Scott’s desire to put Highland traditions back on the political map. He devised the King’s itinerary and issued a pamphlet to the citizens of Edinburgh advising them what to wear and how to show their patriotism. As Scott recalled, ‘all has gone off most happily, and the Edinburgh populace have behaved themselves like so many princes’. 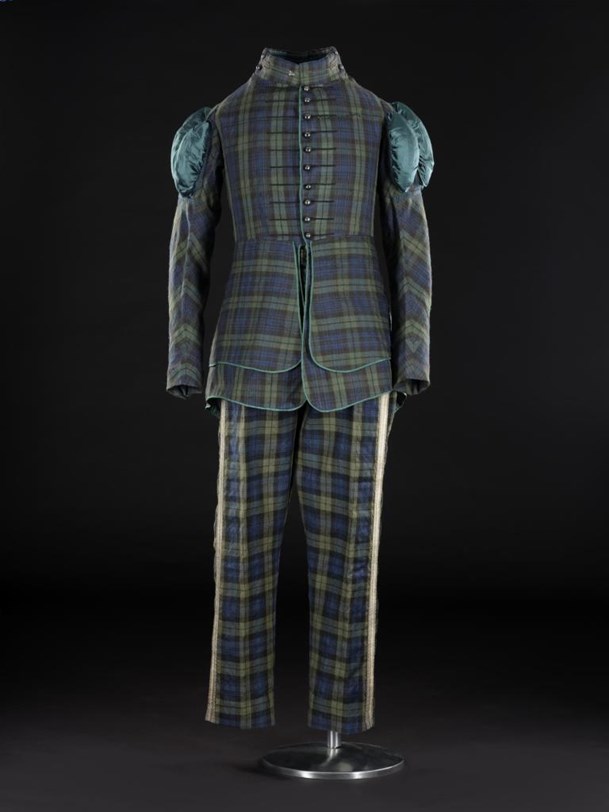 Above: The Royal Company of Archers was the official King’s Body Guard during the royal visit. The uniform was redesigned in 1822 to suit the romantic tastes of the visit organisers, in particular Sir Walter Scott. The tunic was altered to incorporate puffed sleeves and additions included a large neck ruff, white leather gauntlet gloves, a buff-coloured waist belt, and eagle feathers fixed to the bonnet brim. These embellishments were a conscious decision to incorporate medieval features into the uniform. This picturesque uniform was abandoned soon after the visit, as it was thought inconvenient for shooting.

Illustration from A Historical Account of His Majesty’s Visit to Scotland by Robert Mudie, 1823, showing a 'View of the Royal Procession advancing by Picardy Place, from the barrier where the keys of the city were delivered by the Lord Provost to His Majesty: 15 August 1822'.

“
Is death the last sleep? No, it is the last and final awakening.
- Sir Walter Scott

A series of disastrous business ventures combined with a banking crisis in 1825 plunged Scott into huge levels of debt. Yet rather than declare himself bankrupt, the author set himself the challenge of writing himself out of debt, working tirelessly to repay his creditors. 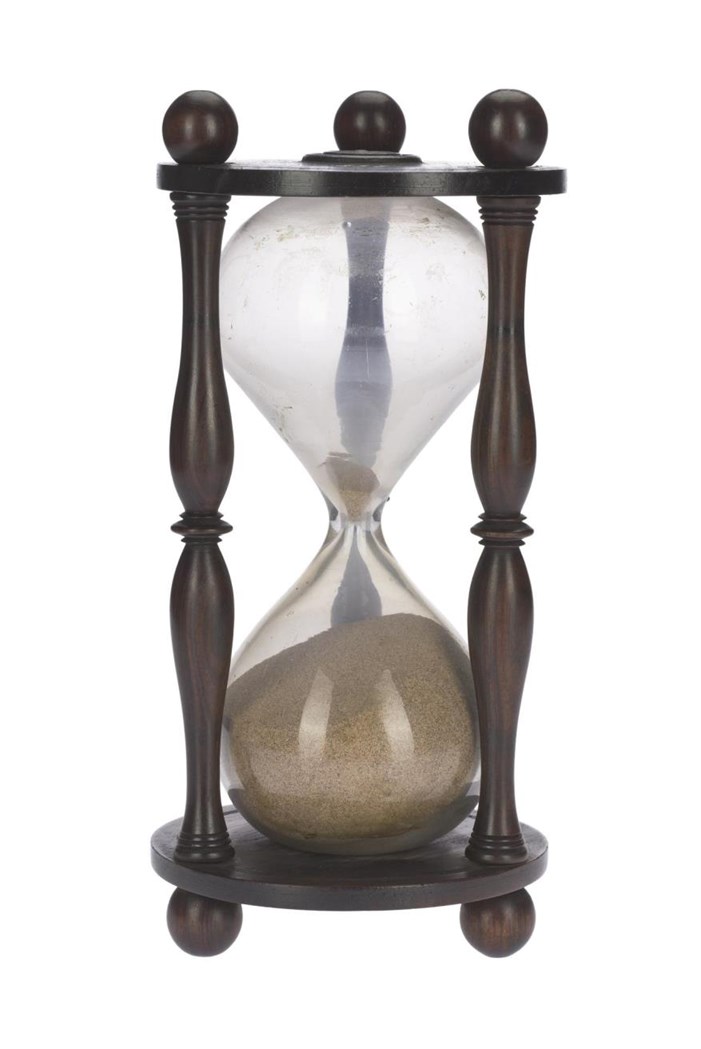 Above: This half-hour glass was used by Sir Walter Scott to time himself when working. You can see it in the Scotland galleries at the National Museum of Scotland.

But his health failed him, and after an aborted trip to Europe, Scott died at Abbotsford on 21 September 1832, aged 61. He was buried at Dryburgh Abbey, a fittingly picturesque and romantic ruin near Abbotsford. 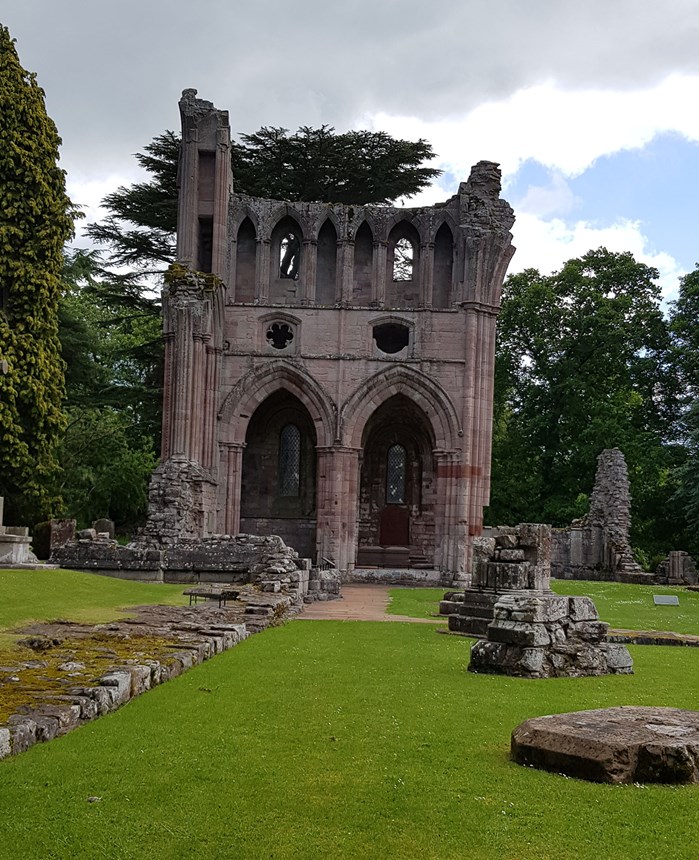 Above: The picturesque ruins of Dryburgh Abbey.

“
Wednesday, the honoured remains of Sir Walter Scott were consigned to the tomb, amid the unfeigned regret of thousands. Never perhaps was the esteem in which this truly great man was held more conspicuously displayed than on this melancholy occasion.
- Edinburgh Courant, 1832

Scott's home at Abbotsford was opened to the public in 1833, just one year after the author's death, and continues to be a much-visited place of literary pilgrimage. He continued to acquire new fans throughout the 18th century, including the young Princess Victoria, who became a devotee of Scott and the romantic vision of Scotland presented in his work after reading Scott’s novel The Bride of Lammermoor in 1836.

After Scott's death, a competition was held to design a monument to him. Twelve years after his death, the Victorian gothic Scott Monument was completed on Princes Street in Edinburgh. At just over 61 metres high, it's the second largest monument to a writer in the world. A fitting tribute to a literary giant. 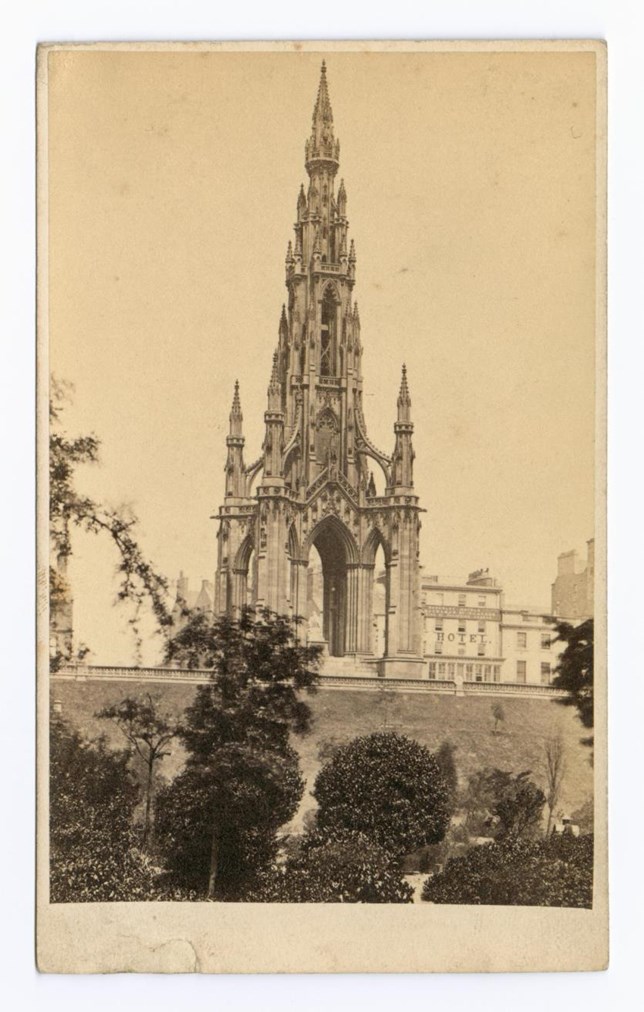 Above: Carte-de-visite depicting the Walter Scott monument, by Archibald Burns, Edinburgh, 1867. From the Howarth-Loomes collection at National Museums Scotland.