This crystal tumbler was given by Napoleon to Captain Francis Maitland, captain of HMS Bellerophon, the British warship which took the deposed Emperor away from France following his defeat at Waterloo.

This tumbler is engraved with the cypher and crown of Napoleon's former wife, the Empress Josephine. 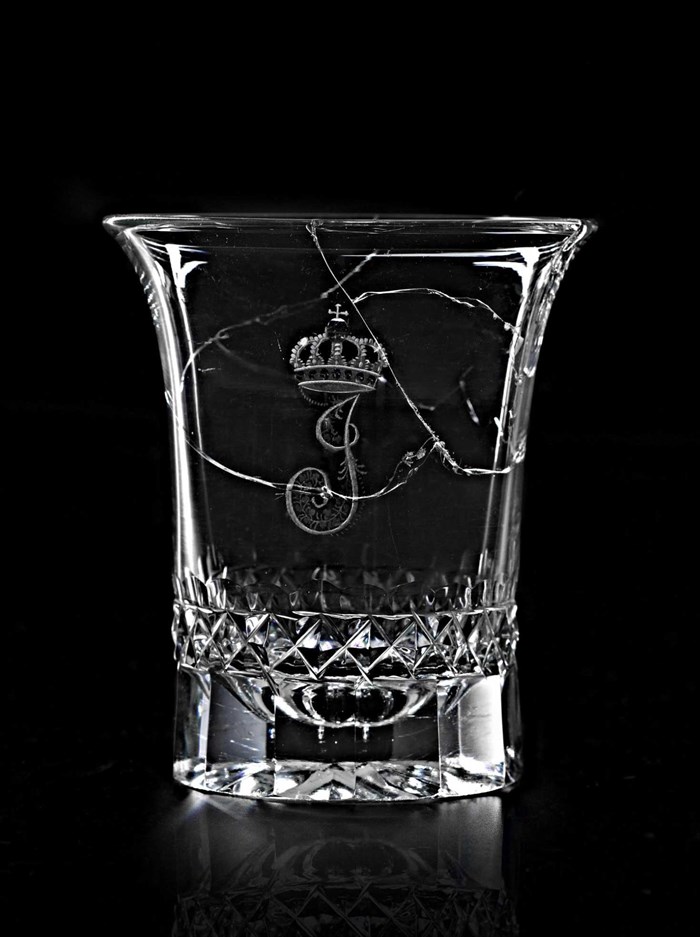 Above: The Josephine tumbler is on loan from Mr Henry Christopher Maitland and Mrs Mary Wang.

After the Battle of Waterloo, Napoleon tried and failed to rally political support in Paris. Forced to abdicate, he then made for the port of Rochefort with the intention of escaping to the United States of America. But Rochefort was blockaded by British ships, the most powerful of which was HMS Bellerophon, a 74-gun man-of-war, commanded by Captain Frederick Maitland.

Following negotiations, Napoleon agreed to be taken on board Bellerophon for transport to England, placing his trust in the British government not to deliver him back to his enemies in France. Captain Maitland received Napoleon and his entourage onto his ship with civility and treated his prisoner with respect. After Bellerophon crossed to England, Napoleon remained on board for two weeks while the ship lay at anchor off the south coast. News of Napoleon’s presence caused a sensation, and fleets of small boats carried sight-seers out towards Bellerophon all anxious for a glimpse of the fallen emperor.

How did the tumbler arrive in Scotland?

Finally, Napoleon was transferred to HMS Northumberland, to be taken into exile on the Isle of St Helena in the South Atlantic. As he took his leave of Captain Maitland, Napoleon asked him to accept a small gift from his travelling case: this tumbler engraved with the cypher and crown of his former wife, the Empress Josephine.

Maitland was from Fife, and he purchased the estate of Lindores with the proceeds of his distinguished naval career. Displayed beside the Josephine tumbler is the Patriotic Fund presentation sword he received for his gallantry in battle at the Bay of Muros in 1805. In 1826 Maitland published a memoir of his encounter with Napoleon, Narrative of the Surrender of Buonaparte.