You are here Home > National Museum of Scotland > Things to see and do > Past exhibitions > Scottish Pottery: Art and Innovation
Over 250 years ago Scottish industry began producing a wide range of pottery, from everyday ware to exotic decorative pieces. Potteries established by Scottish entrepreneurs sprung up around the Forth and Clyde regions, as well as further afield.

Scottish Pottery: Art and Innovation was a small display that brought together key objects from National Museums Scotland’s collection from an important time in Scottish industrial history, it told the story of some of the people who embarked on this journey of industrialisation.

Part of Year of History, Heritage and Archaeology

Header image: In 1790s Delftfield began producing black ware known as 'Egyptian Black'. This piece is exceptionally rare as it is one of only two known marked pieces made by the pottery. 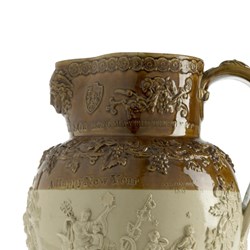