Work to transform the streetscape outside the National Museum of Scotland on Edinburgh’s Chambers Street will start on Sunday 10 January. 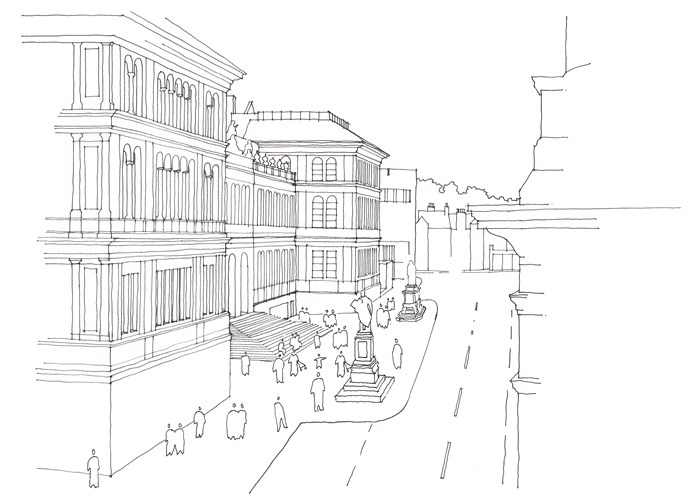 Sketch of planned streetscape outside the National Museum of Scotland from Hoskins Architects.

An innovative public/private partnership involving the City of Edinburgh Council, National Museums Scotland, the University of Edinburgh and private funders will create a new public space with a pedestrianised area in front of the Museum and a new statue to the architect William Henry Playfair. Two lanes of traffic will be maintained on the north side of the street.

The pedestrianised area in front of the Museum will significantly enhance the setting of the much-loved, listed Victorian building, showcasing the architecture and providing a public space where events can be hosted in connection with the Museum, the University of Edinburgh and the city’s many festivals.

The ambition to improve the environment in Chambers Street has been integral to the City of Edinburgh Council’s plans for the area for some time, as part of broader plans to improve the public realm across the city centre. The proposals, developed by Hoskins Architects, offer a comprehensive improvement of the thoroughfare, breathing new life into Chambers Street.

A statue of the Scottish architect William Henry Playfair has been commissioned from the renowned sculptor Sandy Stoddart and will stand on the new plaza with the relocated and restored statue of William Chambers, the publisher and former Lord Provost of Edinburgh. In the Year of Innovation, Architecture and Design, the new statue will provide a fitting tribute to the contribution which Playfair made to the capital.

“All major cities have a quality public realm and the plans to redefine the use of the public space in Chambers Street will provide just that – an appropriate setting in keeping with the prominence of the buildings and a much enhanced public space for people to meet and enjoy events. This space will create a new focus for cultural activity in association with the Museum and our many partners.”

Professor Sir Timothy O’Shea, Principal and Vice-Chancellor of The University of Edinburgh, said:

“William Playfair, a distinguished alumnus of the University and great Enlightenment figure, created some of Edinburgh’s landmark buildings. Few architects have made such a far-reaching impact on an urban landscape, yet his work deserves to be more widely known. This new statue, close to one of his greatest endeavours – the re-design and completion of Old College – will provide a fitting tribute to his work.”

“We are pleased to working with National Museums Scotland and the University of Edinburgh to help facilitate this project, which will vastly improve the area for visitors to the National Museum, as well as all those passing by.

“As we have found in other parts of the city, increasing and improving pedestrian space can have a really positive impact on its surroundings, so I look forward to seeing the effects the widened and enhanced footway will have on the street’s striking architecture as well as encouraging events and performances to the space throughout the year.”

Work begins with the removal for restoration of the statue of William Chambers, which will be returned when the project completes in summer 2016, celebrating the 150th anniversary of the opening of the original building of the National Museum of Scotland, and in time for the launch of ten new galleries of science and technology, decorative art, fashion and design.