Accepted in lieu of Inheritance Tax by H M Government from the estate of Sir John Swinton and allocated to National Museums Scotland, 2021. The acceptance of this collection settled £2,267,370 of tax.

The large paintings depict the Nawabs who were ruling Bengal at that time. When Swinton first met them, they were the local rulers under Mughal sovereignty. Subsequently, they came under British rule. The paintings are believed to have been given as diplomatic gifts during this period of transfer of power.

The paintings form an excellent historical source and contextualise the period. Their lavish decoration in minute detail of clothing and landscapes, set against rich gold and silver backgrounds, feature court scenes, a royal procession on horseback and evening entertainment with music and dance. Painted in the Indian miniature style, which is renowned for its beauty, finesse and highly detailed representations, these paintings have been executed meticulously with delicate brushwork.

An Edinburgh-trained surgeon, Archibald Swinton travelled to Madras (now Chennai) in 1752 and secured a position as an army surgeon. He served in the East India Company’s army at the beginning of its military expansion in India. Subsequently, with his Persian language skills and familiarity with local customs, he became an interpreter for the East India Company and on several occasions was sent as an emissary to negotiate with local rulers, including the Mughal emperor Shah Alam II. Swinton was instrumental in the signing of the Treaty of Allahabad in 1765 (following the Battle of Buxar) by Major-General Robert Clive and Shah Alam II. This event marked the formalisation of British rule in India.

The Swinton collection will add to the understanding of this period of British imperial expansion in India and will enable the telling of early Scottish-Indian encounters, through which we can explore Scotland’s historical relationship with the world and its legacies today. 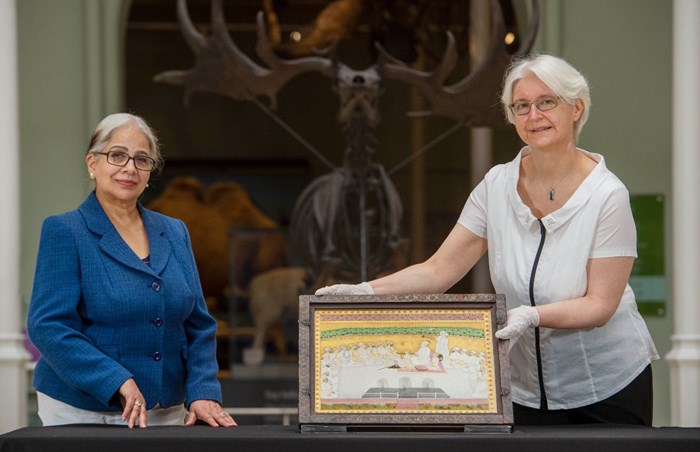 “I am delighted that the Archibald Swinton collection has been acquired through the Acceptance in Lieu Scheme by National Museums Scotland. These paintings and lacquer work are Mughal in origin and date to the 18th century; they are believed to have come into Swinton’s possession as diplomatic gifts. With rich decoration and elegant composition, the pictures are a testament to the skilled craft and precision of their respective artists. I hope that this example will encourage others to use the scheme to find a place for great art in our national collections.”

“I am thrilled that this remarkable collection of 18th century paintings and lacquer work has been saved for the nation under the Acceptance in Lieu scheme.

“The Archibald Swinton collection is of exceptional historical and art historical significance and will make an outstanding addition to the South Asian collections at National Museums Scotland.

“We look forward to preserving, researching and displaying this exceptional material for the benefit of all our visitors.”

"I have a very positive outlook on the South Asian collections of paintings and objects at the National Museum of Scotland in Edinburgh. The Archibald Swinton Collection showcases and tells a story of South Asian culture, history and heritage of the 18th century. Moreover, it gives us, especially the South Asian diaspora, an opportunity to revisit and reinterpret history as we see and understand it from our perspective, in collaboration with diverse communities here in Scotland".