The influence of theatre prints like this one can still be seen in Japanese Manga artwork today.

Kabuki was the popular form of theatre in 19th-century Japan, and it continues to be staged today.  It is a stylised, non-representational form of theatre, which combines elements of drama, dance, music and acrobatics. It is performed by an all-male cast and employs lavish stage sets, sumptuous costumes and elaborate wigs and make-up. Woodblock prints were a cheap and popular product, permitting Kabuki fans to acquire pictures of their favourite actors. They were designed by the leading artists of the day and were printed to the highest technical standards, but were accessible to ordinary people. Although several hundred impressions of a design may have been produced originally, attrition rates were high, and today prints in good condition are rare and valuable.

This print portrays the actor Kawarasaki Gonjūrō I (1838–1903) as the lead character in the Kabuki play Sukeroku, The Flower of Edo (Sukeroku yukari no Edo zakura). 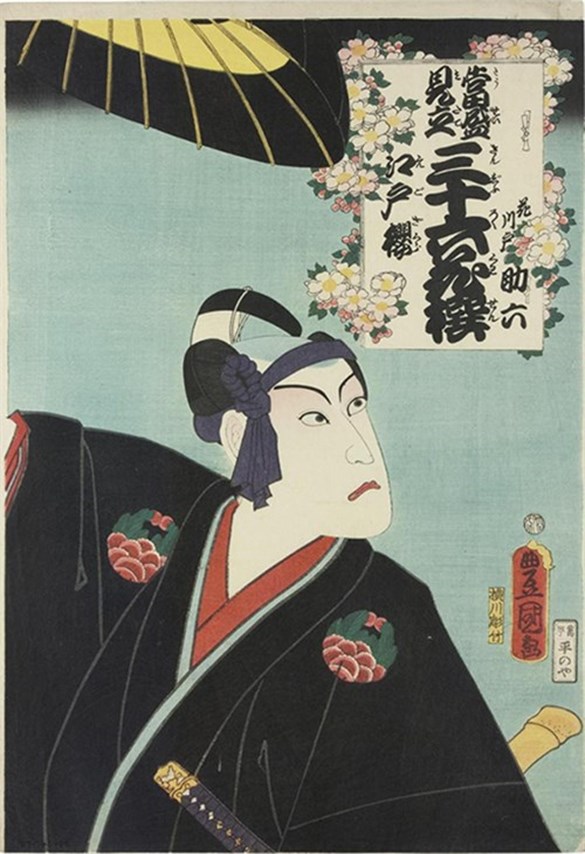 Sukeroku is the quintessential dandy, and the play is set in Yoshiwara, the licensed pleasure quarter in Edo (today's Tokyo), where the hero is in love with the courtesan Agemaki. The play was usually performed during cherry blossom season, and the stage was decorated with this motif, as seen here around the title cartouche. Sukeroku is instantly recognizable from the umbrella held high above his head, the purple headband, and the bamboo flute on his back. Here, he is making his grand entrance into Yoshiwara, where he moves with a particular dandy-like gait (called tanzen). This design is from one of the finest print series by the artist Kunisada, who dominated the production of actor prints during the middle decades of the 19th century.

Kawarasaki Gonjūrō I was one of several sons born to the famous actor Ichikawa Danjūrō VII. However, his parents were not married and he was adopted into another theatrical family. At the time of this print, Gonjūrō was a young man, aged 23 years. 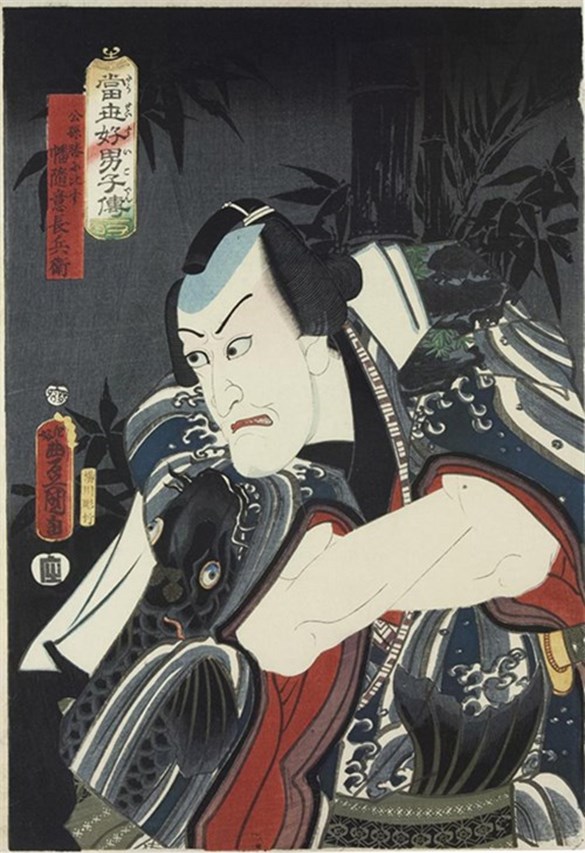 Thirteen years later, in 1874, Gonjūrō received the hereditary stage name Ichikawa Danjūrō IX. This prestigious name had been held before him by his biological father and then his elder half-brother (Danjūrō VIII), but its use had lapsed for more than twenty years. 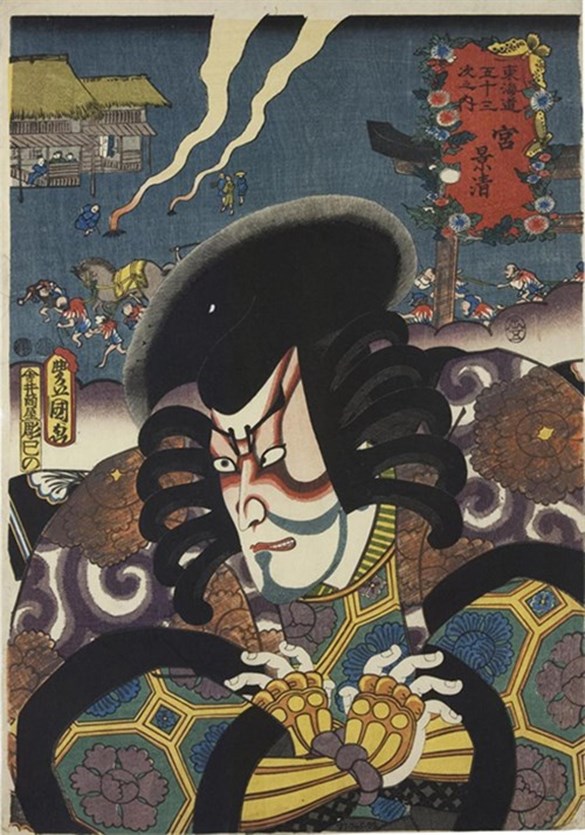 Above: Gonjūrō's elder half-brother, Ichikawa Danjuro VIII, as Kagekiyo, from the series Tokaido gojusan-tsugi no uchi (53 Stations of the Tokaido) by Utagawa Kunisada, 1852.

Gonjūrō was to become one of the superstars of the Kabuki world during the late 19th century, credited with saving the art when it came under threat during a period of widespread modernisation.