This 19th century writing box continues traditional motifs and techniques of this art form and displays the height of the Japanese lacquer artist's skill.

The sap of the lacquer tree is poisonous.

The craft of lacquerwork has existed in Japan since prehistoric times and has been used to produce a diverse array of objects from household furniture to the armour of the samurai, the prestigious class of Japanese warriors. The museum's black and gold writing box (suzuribako) falls into a traditional branch of lacquerwork established in Japan in the seventh to eighth centuries which concentrates on the production of containers. To create these products, a craftsman would have applied a fine layer of refined sap from the lacquer tree (Toxicodendron vernicifluum) to carved and extremely thin wood. Once applied, the layer would have been allowed to harden. The craftsman would have repeated the process multiple times until achieving a durable and attractive finish, resulting in a final product that was more lacquer than wood. 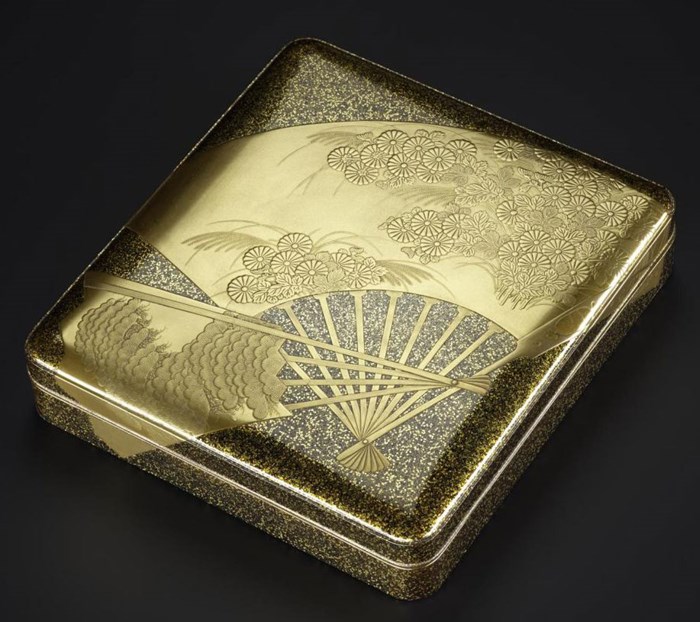 Above: The top of the National Museum of Scotland's late nineteenth-century Japanese writing box, made ca. 1890. The writing box is decorated in black and gold, colours traditionally used in Japanese lacquerwork.

The Scholar and the Suzuribako

Calligraphy, a form of stylized writing, is considered an elegant art form as well as a prestigious scholarly pursuit in East Asian cultures. A suzuribako, such as this one, would have been an essential part of a scholar's equipment, having both practical and aesthetic purposes. Practically, the container was a place to store calligraphic utensils – a knife, a brush, a water dropper, an ink stone, and an ink stick holder. The museum's writing box is unusual in that it is complete with all of these associated tools. Aesthetically, the elegance of the writing box was a statement of the scholar's knowledge and refinement. 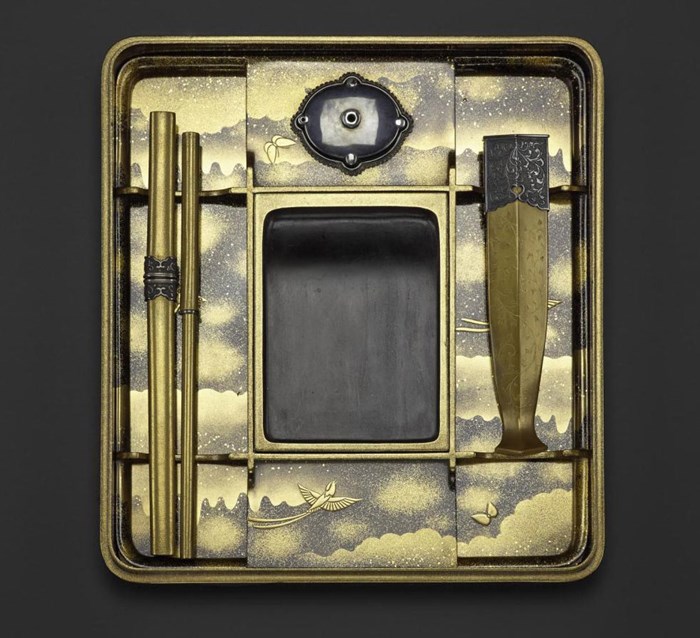 Above: Contained in the writing box are (from left to right) a knife, a brush, a water dropper, an ink stone, and an ink stick holder.

This writing box was produced around 1890 during the Meiji era (1868–1912), a period of industrialisation and modernisation in Japan, yet it continues traditional motifs and forms. The design on the lid is of gold fans decorated with chrysanthemums and pine trees. In Japanese art, fans are traditional motifs associated with elegant pursuits. The inside is decorated with butterflies and long tailed birds, which resemble Japanese Paradise Flycatchers (Terpsiphone atrocaudata). 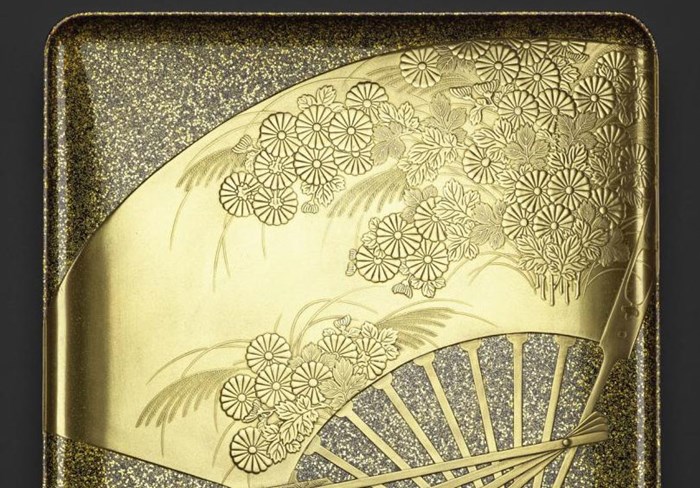 Above: An upclose view of the maki-e that decorates the lid of the writing box and creates a raised effect as seen with the fans and chrysanthemums.

The writing box also continues traditional lacquerwork techniques. The motifs are all worked in a technique known as maki-e (sprinkled pictures) which originated in the Heian era (794–1185). The maki-e technique produces a design by sprinkling gold onto wet lacquer. The lacquer is then allowed to harden and the process is repeated multiple times until the design is complete. 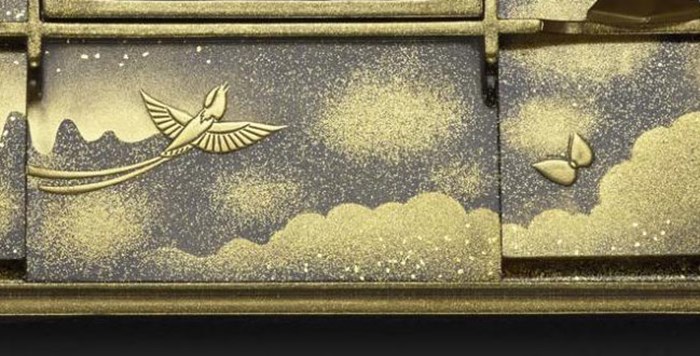 Above: An upclose look at the nashiji that decorates the inside of the writing box and creates the "mist-like effect".

To create the background of sprinkled gold powder on the inside of the container, the craftsman employed a technique similar to maki-e known as nashiji ('pear-ground') which first originated in the Kamakura era (1185–1333). Like maki-e, nashiji uses gold powder to create an aesthetically pleasing effect but it is employed to produce the ground decoration.