Stone Age jade from the Alps

Found in Scotland, these exquisite axeheads were made over 6,000 years ago, high in the Italian Alps. Now, thanks to a French-led project involving National Museums Scotland – Projet Jade – their fascinating story can be told.

Examples can be seen in the Early People gallery, Level -1, National Museum of Scotland.

These hard-won pieces of the mountains could have been regarded as having divine powers to protect and heal.

Green treasures from the magic mountains

These axeheads were not everyday tools for felling trees and chopping wood – they were sacred and precious ceremonial objects, made of rare jadeitite (commonly known as jade) and other special rocks.

Why were they so special? Neolithic people may have associated mountains with the world of the gods. These hard-won pieces of the mountains could have been regarded as having divine powers to protect and heal. Perhaps polishing them to a glassy sheen was believed to enhance these powers. Their luminous green colour may have symbolised immortality.

Far-travelled objects: from the Alps to Scotland

The makers of these axeheads climbed to heights of over 2,000 metres in the Italian Alps to extract the rare and prized rock from Mont Viso, south-west of Turin, and Mont Beigua above Genoa. They took blocks and roughed-out axeheads down to their villages to finish them there, before exporting them. The axeheads travelled north-westwards through France, passing through many hands. Some were re-shaped and re-polished during their journey. 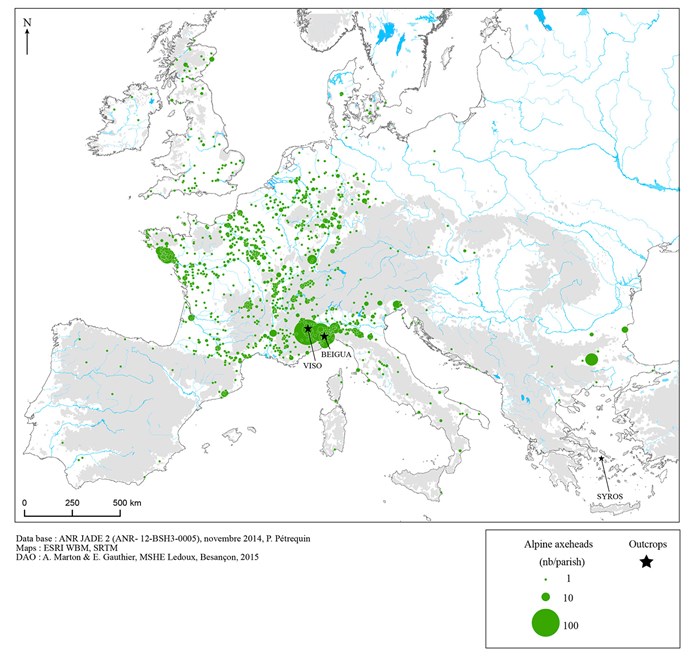 Location of the sources of jadeitite, omphacitite and eclogite on the Mont Viso and Mont Beigua massifs, and distribution of axeheads over 135mm long made of these rocks. Map © Projet Jade

The ones found in Scotland were brought over from northern France by immigrant farmers shortly after 4000 BC. Most would have been at least 100 years old. They would have been treasured heirlooms, each with its own story.

These axeheads travelled over 1,500 kilometres in the course of their long and complicated lives.

This axehead of jadeitite from Mont Viso was found around 1840, near Greenlaw, in the Scottish Borders. Many of the Alpine axeheads found in Scotland are of this distinctive thin triangular shape

Pinpointing the source of the stone

Various kinds of Alpine rock were used to make axeheads – mostly jadeitite, omphacitite and eclogite. Stone Age people knew what to look for: tough green or blackish rocks with sharp edges. Jadeitite can be found as large, free-standing blocks. 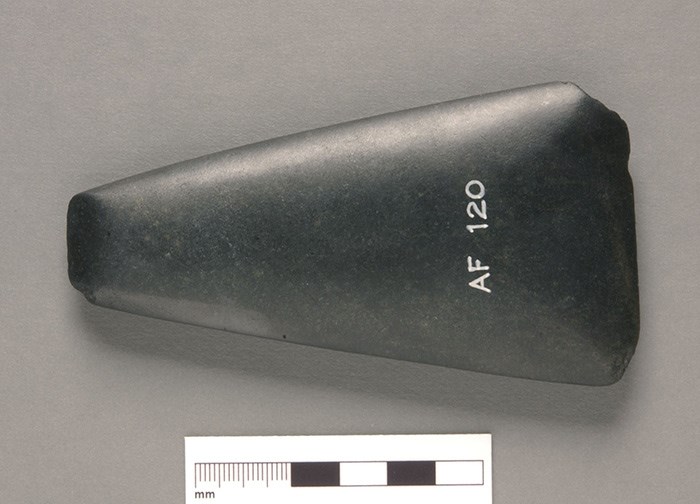 Today various scientific techniques are used to identify an axehead’s rock type and pinpoint its source. Until recently, the usual method involved cutting off a slice, grinding it thin and examining it under a special microscope. Nowadays, only non-destructive techniques are used. Spectroradiometry – a technique borrowed from space exploration – allows archaeologists to trace many axeheads back to specific rock outcrops. By analysing how the rock absorbs light of particular wavelengths it is possible to identify its mineral composition. 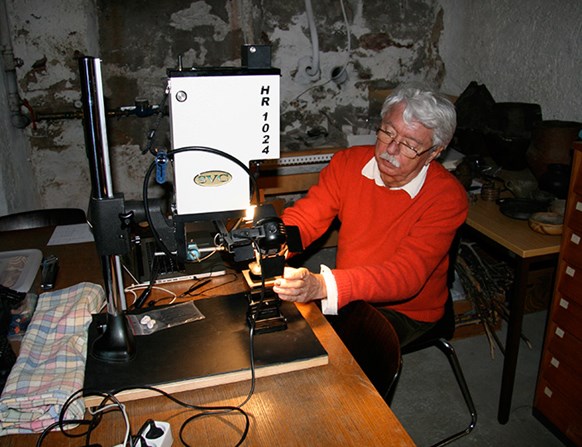 Using a spectroradiometer to analyse an axehead. Photo: © Projet Jade

Raw material was extracted in the mountains by gathering loose blocks, by detaching chunks with a stone hammer, or by setting fire beside a block to loosen long curving flakes. Roughing-out was done by hitting flakes off or by pecking with a hammer-stone.

Back home the process continued by flaking, hammering, grinding and polishing. Some blocks of jadeitite were sawn then flaked and ground. The glassy polish could have been achieved in several ways, including grinding with a paste made of ash from bulrush plants.

The tough Alpine rocks are difficult to work and it took over 1,000 hours to make a highly polished axehead.

Returning the axeheads to the world of the gods

It seems that the Neolithic farmers felt the need to return these sacred and powerful objects to the world of the gods. They deposited them in special places, often in or beside water. The axehead from the River Ericht, for example, was buried upright in the river bank, its blade pointing downwards. 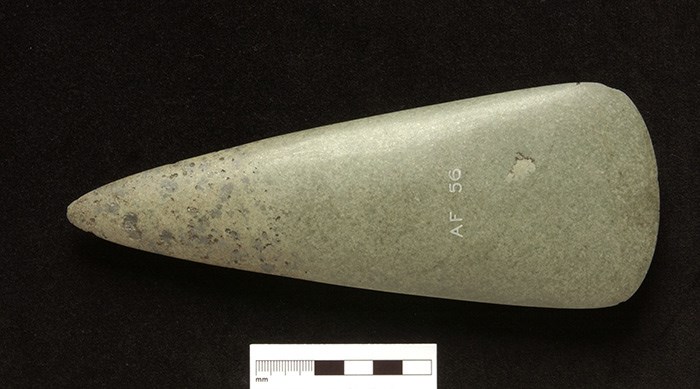 Axehead of jadeitite from Mont Viso, found blade downwards on the bank of the River Ericht, Rattray, Perth and Kinross

Sometimes they deliberately broke and/or burned axeheads, probably as a way of ceremonially ‘killing’ them, removing them from the world of the living. At Cairnholy, in Dumfries and Galloway, they buried a burnt fragment of a broken axehead in a stone monument built to house the dead.

One of two jadeitite axeheads from Mont Viso found in the Glenjorrie Burn, Dumfries & Galloway. The area may have been a small loch when the axeheads were deposited. Other Alpine axeheads have been found in watery locations, in Britain and on the Continent. It seems that by placing them there, people were giving them back to the gods