The Reids have owned land at Kittochside since the 16th century. In 1567, the first laird of Kittochside bought a portion of the land from Robert Mure, laird of Caldwell. Mure later tried to repossess the land. When John Reid refused to give it back, Mure and his men attacked Wester Kittochside several times.

The most severe attacks took place in 1597 and 1599. Friends and relatives of Mure, ‘armed with lances, spears, swords and other fearful wapponis’ threatened John Reid and his family. They seized the Reids’ possessions and animals and burned down the house.

In June 1600 the case of Reid vs Mure was brought before the Privy Council in Edinburgh. John Reid protested that Mure had ‘troubled’ him over a period of 18 years. Mure was found guilty and John Reid was declared the rightful owner of Wester Kittochside. Mure was imprisoned in Edinburgh Castle and ordered to repay the cost of the livestock and Reid’s belongings. He was released on condition that he pay part of the debt within eight days of his release and that he no longer harass John Reid.

The Battle of Bothwell Brig and the Kilbryd Flag

The Reid family prospered and brought more land. In 1679, John and James Reid, great grandsons of the first laird of Kittochside, became involved in a serious conflict. In 1660, King Charles II had been restored to the throne. He wanted to introduce bishops into the church in Scotland, but many people in Scotland opposed this and were prepared to fight.  The two sides met at the Battle of Bothwell Brig, about six miles from Wester Kittochside.

The royal army won and captured the flag of Kilbride parish. James Reid commanded the Kilbryd Company. When he saw the flag had been captured he took direct action.

“
Drawing his broadsword he charged through their dumbfounded ranks and, seizing the staff he tore the silk flag from the pole and wrapping it round his body, made his escape amid a hail of bullets.

John Reid was taken prisoner and sentenced to transportation. He was saved by the Duke of Hamilton, who secured a prison sentence for him instead. He was in prison for six years and released in 1685.

Model of the Wester Kittochside being rebuilt in 1784.

John Reid, the sixth laird, was born in 1760, at the time when farming methods were changing rapidly. His father died in 1770, leaving him a good inheritance. When he grew up, John was well placed to take advantage of the developments in agriculture. He became a successful farmer and businessman.

John Reid married Lillias Rae around 1786. They had five sons, William, Colin, John, Adam and Robert, and three daughters, Margaret, Elizabeth and Lillias. John died in 1850, aged 90. He and his family are buried in East Kilbride churchyard.

The sixth laird left many of the features of the farm and the farmhouse present today. John spent time and money on agricultural improvements such as a drainage system, land division and hedging and improving the living accommodation for his family and livestock. 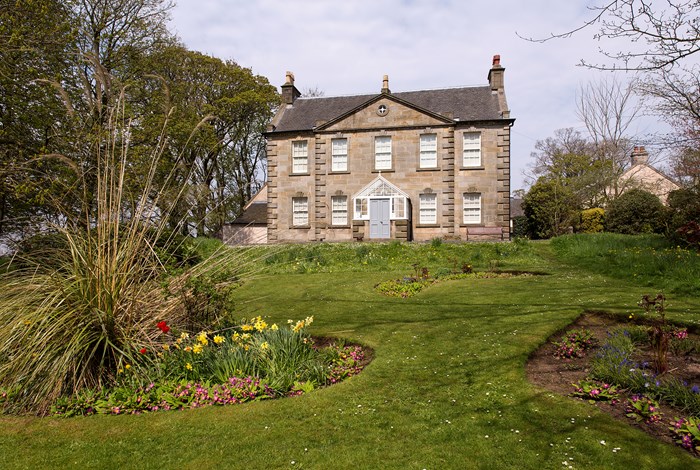 Above: The Georgian farmhouse at Wester Kittochside as it is today © Ruth Armstrong Photography

The farmhouse and steading (much as we see them today) were built in 1783 by John, sixth laird, with some later additions. As with many other farmers, John Reid greatly benefitted from the demands placed upon the country by the Napoleonic Wars (1803-1815), a period when every scrap of land had to be put under the plough.

As in other periods of war, Britain had to make every effort to feed its own people, so not only was John Reid aided by this but the shortage of food helped push up food and grain prices. Between 1815 and 1846 grain prices remained high and stayed that way for another 20 years.

Painting of a Berkshire pig by William Shiels, early - mid 19th century on display at National Museum of Rural Life.

Very little is known about the seventh, eighth and ninth lairds, but during their time at Wester Kittochside they made a number of improvements to the farm and house between 1850 and the early 1900s. They built the dairy and barn, and installed a threshing machine and horse gin. 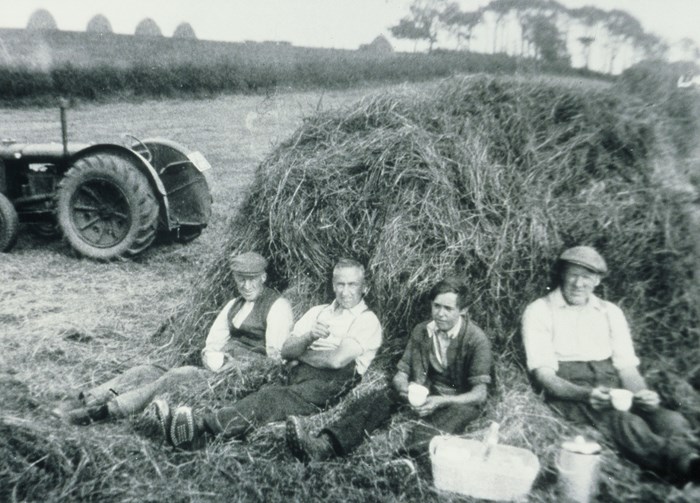 Above: James Reid with three daily labourers who came into help on the farm, especially during harvesting.

Once again there were no children to inherit, so the estate was passed to the ninth laird’s nephew, James Coats Reid, the tenth and last laird of Wester Kittochside. James Reid was the younger nephew of Colin of Lawside (brother of William, the ninth laird) and Helen Coats (sister of Janet, William Reid's wife).

The bothy beside the farmhouse where Heinrich Lückel slept from 1946-1948.

During the First and Second World Wars, more land was brought into cultivation in East Kilbride Parish. Prisoners of war provided the extra labour needed. Heinrich Lückel was seventeen when he was taken, prisoner. He worked at Kittochside from 1946 to 1948. He slept in the bothy beside the house and ate his meals in the kitchen. He kept in touch with the Reids after he returned to Germany. 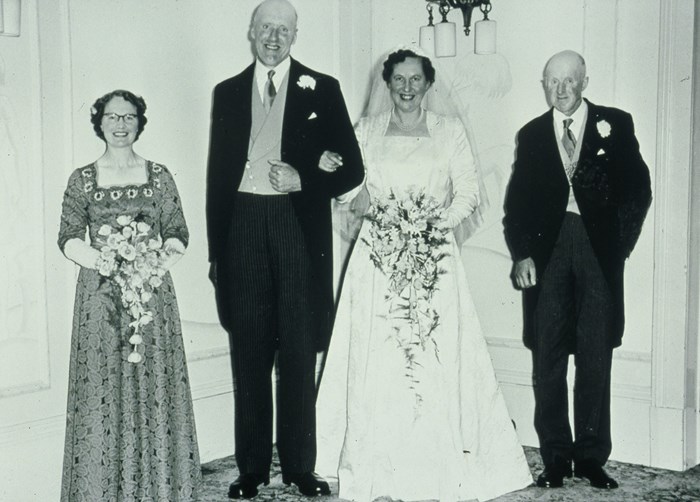 The tenth laird, James Reid, married Margaret Gilmour in 1957. Margaret has stated that James Reid was 6 feet 10 inches tall: he was known locally as ‘the gentle giant’. His shoes, boots and overalls were specially made for him! 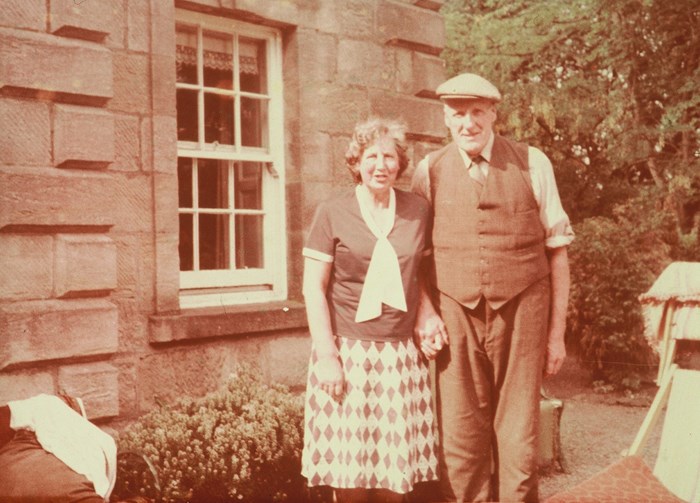 Above: The Reids outside the Wester Kittochside farmhouse.

In 1963, the farm changed from dairy to beef production. The land was only used for grazing beef cattle. Many of the changes that have happened on other farms were not needed at Wester Kittochside. Large machines, like combine harvesters, have never been used, so gateposts and barn doors have never been widened.  This is part is what makes Wester Kittochside a place of special interest.

The farm at the time of Margaret Reid's arrival in 1957 was a mixture of arable, dairy and beef farming. The milking machinery was fitted by this time. Ayrshire cows were kept at Kittochside, and the milking took place first thing in the morning and mid-afternoon, much as it is today. 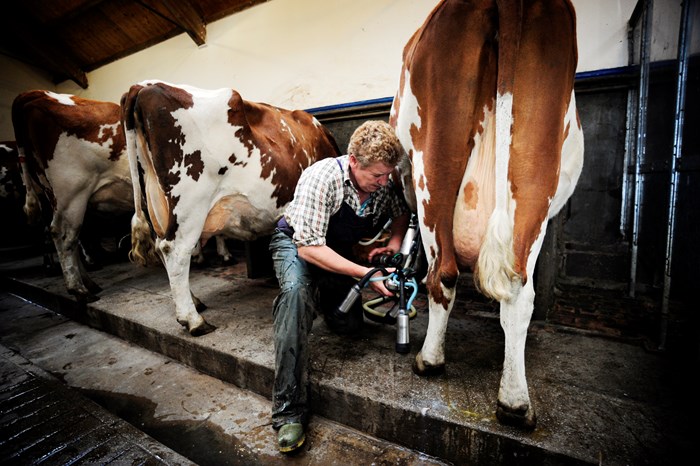 Above: Milking using methods employed in the 1950s are still used on the farm today.

Margaret and James would have liked to have children, but unfortunately this was not to be. One evening, when they were sitting outside the house, James asked Margaret if she thought the National Trust for Scotland would be interested in taking it, and so the couple decided together to leave the farm to the organisation's care.

Since the National Museum of Rural Life opened in 2001, Wester Kittochside Farm has been run by National Museums Scotland in the style of a 1950s working farm. The acreage of the farm was 110 acres when it was gifted to the National Trust for Scotland, and now has 170 acres in total, as more land was brought to build the Museum and car parks, to ensure that the integrity of the historic farm was not compromised.

Today Wester Kittochside farm is home to Ayrshire, Aberdeen Angus and Highland cattle, Tamworth pigs, sheep, hens and Clydesdale horses. The farm is run in the style of a 1950s dairy farm, and the rooms of the Georgian farmhouse are decorated as they would have been in the 1950s. Large areas of the farm remain uncultivated, in order to encourage and improve the already diverse habitats and species of flora and fauna.

And it is thanks to the foresight and generosity of James and Margaret Reid that we are able to enjoy the fascinating history of this site today.