Discover the secrets guarded by this mysterious Egyptian figure, who once acted in the most celebrated drama of Ancient Egypt.

The coffin comes with a lid which dates from the same period, but which belongs not to Iufenamun but to a priestess of Amun called Tjentwerethequa, now thought to be Iufenamun’s grandmother.

The royal pharaohs reburied by Iufenamun were rediscovered in 1881. The story is told in Egyptian director Shadi Abdel Salam’s 1969 film Al-Mumiyaor The Night of the Counting Years.

Where did the coffin and mummy come from? 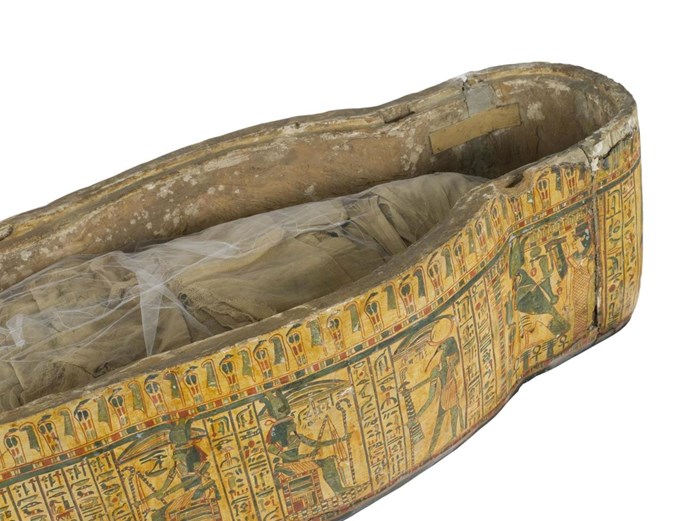 Above: The mummy of Iufenamun in the coffin.

This 3,000 year old mummy and coffin base, with the lid of Tjentwerethequa, was brought to Scotland by the distinguished engineer Sir Colin Scott-Moncrieff, who was probably gifted them while stationed in Egypt during the late 19th century. Sir Colin donated them to his former school, the Edinburgh Academy. In 1907, the school gave the coffin base, lid and mummified body to the Royal Scottish Museum, the precursor of National Museums Scotland.

The base of the coffin dates from the 21st-22nd Dynasties and is decorated with images of its owner with Egyptian gods, including Isis and Osiris, Nut, the goddess of the skies, Hathor, the cow goddess and Amun-Ra, the creator deity. These images represent the afterlife and rebirth, and were intended to offer protection to the deceased.

Above: Left/east side of the coffin base of Iufenamun.

Above: Right/west side of the coffin base.

The coffin base also displays the titles of its owner:

“
The Osiris, senior pure-priest, entering-priest for the memorials of Amun-in-Ipetsut, chief of the cemetery for works in the estate of Amun-Ra, king of the gods, Iufenamun.

Inside lies the mummified body of a man probably aged about 40, wrapped in bandages.

The prestigious titles, along with the high quality of the embalming and coffin base, imply that Iufenamun was a man of considerable importance. But who was he?

His titles suggest that he was a senior priest of Amun-Ra (Iufenamun means “he belongs to Amun”) and that he had many wide-ranging duties, including responsibility for the necropolis, or burial ground.

This means that this mummified body could well be Iufenamun, son of Nesypaqashuty. This is an exciting discovery, as this Iufenamun was a significant figure in Egyptian history. 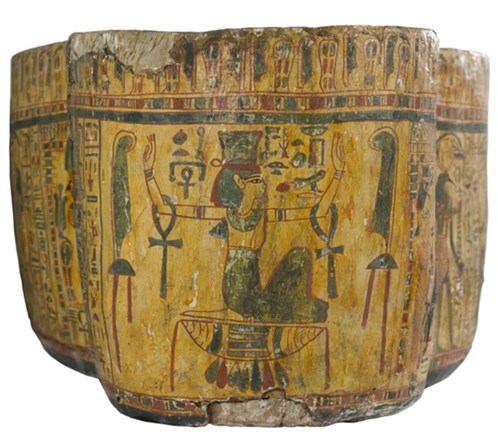 Above: The base of the coffin.

Iufenamun was an important priest at the Temple of Karnak, and was involved in the famous reburial of the royal New Kingdom mummified bodies. In c.961 BC, Temple priests decided that, in order to keep the bodies and funerary goods of the mighty pharaohs safe from desecration, they should be moved from the Valley of the Kings to a new, secret resting place in Deir el-Bahri, across the River Nile from the Temple. Inscriptions on the coffins of Seti I and Ramesses II tell us that Nesypaqashuty and Iufenamun were both entrusted with this sacred task.

The hidden tomb, which contained over 50 royal mummies, wasn’t rediscovered until 1881, although some items from the cache had been looted and sold previously.

The images above show a facial reconstruction of Iufenamun. The first shows a plaster model of the skull created from CT scans. The medical artist used this model as the foundation upon which to build up the facial muscles and skin in clay, before casting the completed face in bronze. 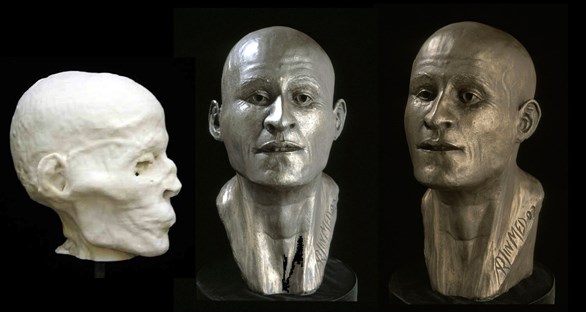 Above: CT scan of the skull of Iufenamun (left) and bronze facial reconstruction.

How was the coffin and mummy conserved?

Before the mummified body and coffin base could go on display, painstaking conservation work was carried out to repair damage and protect against future harm. These blog posts explain how this was done.

Where is Iufenamun on display?

The mummified body and coffin base of Iufenamun, together with his facial reconstruction and the lid of Tjentwerethequa, is on display in the Discoveries gallery, which showcases some of the Museum’s most treasured objects.