East Fortune Airfield is the UK's best-preserved Second World War airfield. Discover its history from its beginnings in the First World War to its transformation to a national museum.

East Fortune, now home to the National Museum of Flight, played a major role in both the First and Second World Wars.

With the outbreak of the First World War in 1914, the Admiralty was tasked with establishing a string of home defence airfields along the southeastern coast of the United Kingdom, from Edinburgh to the south coast of England.

In September 1915 the Director of Naval Air Services gave approval for an air station to be opened at East Fortune and, due to its proximity to stretches of the North Sea, the Admiralty decided to station airships for carrying out sea-lane patrols there.

The first aircraft arrived in September 1915: two Sopwith two-seat Scouts and a Maurice Fairman from the air station in Montrose. Over the following months, more types arrived, Avro 504s and B.E.2c and the first airships, midway through 1916, for which two large hangars were erected.

The air defences at East Fortune were put to the test on the night of 2 April 1916, when two German Navy Zeppelins attacked Edinburgh. One of them was spotted over the coast near St Abbs and East Fortune was notified. At 21.40 hours Flight Sub-Lieutenant Cox took off in an Avro 504C single-seat fighter to intercept the raider but was unable to find it. He returned to East Fortune only to crash his machine on landing and he was badly injured.

The Royal Naval Air Station, East Fortune, was officially commissioned on 23 August 1916 and by May 1917 a third airship shed was constructed to house rigid airships.

This enormous structure was some 200 metres long and over 45 metres high. Throughout the First World War, the British airship effort was predominantly defensive by nature, carrying out anti-submarine patrols around the coast and escorting convoys from their gathering point at Methil on the Firth of Forth.

During 1917 further aeroplane types arrived as East Fortune was used as a depot for ship-based aeroplanes, and a training school was set up for pilots stationed with the Battle Cruiser squadron at Rosyth.

The most influential type of aeroplane to serve at East Fortune in World War 1 was the Sopwith Cuckoo, the first aircraft carrier-based torpedo dropping plane.

By July 1918, crews were being trained for a daring mission proposed by Admiral of the Fleet Sir David Beatty. The aircraft carrier HMS Angus would launch her Cuckoos against the German High Seas fleet at anchor in the Jade River at Wilhelmshaven. To train crews in torpedo bombing technique, No.1 Torpedo Training School was set up and re-numbered 201 Training Squadron in August 1918.

The fighting of the First World War ended on 11 November 1918. When the surrendered German Fleet sullenly sailed into the Firth of Forth, East Fortune’s aircraft photographed and filmed the event. 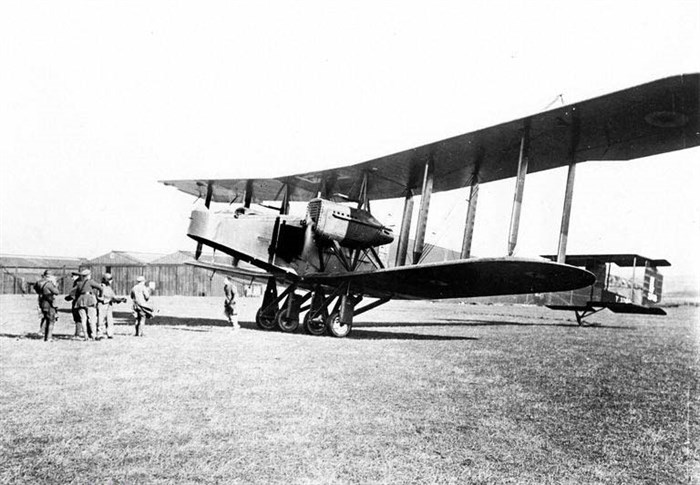 Of all the airships stationed at East Fortune, the most famous was Airship R.34, which arrived at East Fortune on 30 May 1919. On a cold misty 2 July 1919, at 1.42am, R.34 and her intrepid crew of eight officers and 22 men, one stowaway, two carrier pigeons and a kitten set off on the first direct flight between Britain and the United States. 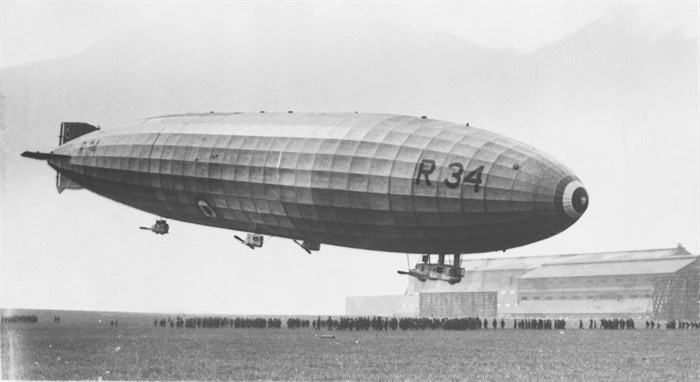 Onboard were two carrier pigeons and two stowaways: Aircraftsman Second Class William ‘Billy’ Ballantyne and a tabby kitten called Wopsie Billy was a regular member of the crew who hid aboard the night before departure. Wopsie was smuggled aboard by one of the engineering crew, and became the ship’s unofficial mascot for the journey, returning aboard R.34 as the first feline to fly across the Atlantic! 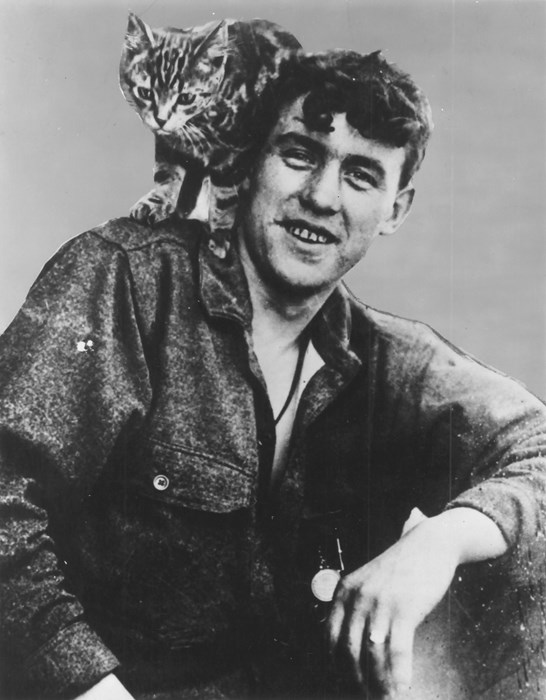 R.34’s flight from East Fortune to Long Island, New York and back were the longest journeys flown by an aircraft at the time. When she returned to her home station, little flying was carried out from then on. She and the non-rigid NS.7 were the last airships to fly from East Fortune, departing on 4 February 1920, after which the airship station closed. 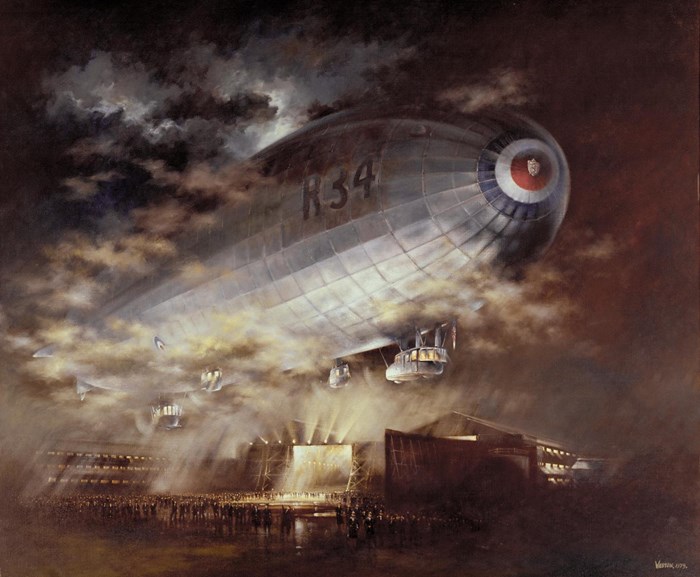 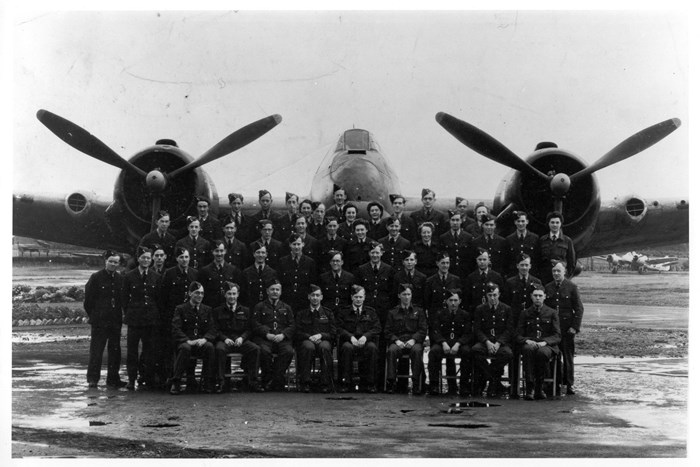 In June 1940, the site was requisitioned by the Air Ministry as a satellite field for nearby RAF Drem. Throughout the Second World War, the Royal Air Force Station, East Fortune served as an operational training base. The first crews to pass through were of Australian, Canadian, New Zealand and Polish origin. Accidents were frequent, often fatal, and the surrounding countryside became littered with aeroplane crash sites. From 4 June 1941, the Air Defence Cadet Corps became the Air Training Corps and they often held camps locally for young cadets which provided them with their first flying experience, in the de Havilland Dominies based at the airfield.

On 24 November 1942, the airfield was transferred to No.17 Group Coastal Command and became an anti-shipping-strike training unit with the Bristol Beaufort and Beaufighter as its principal machines. Training commenced over Aberlady Bay in the art of torpedo bombing and unguided rocket attacks, and once again a Torpedo Training School was opened on site. 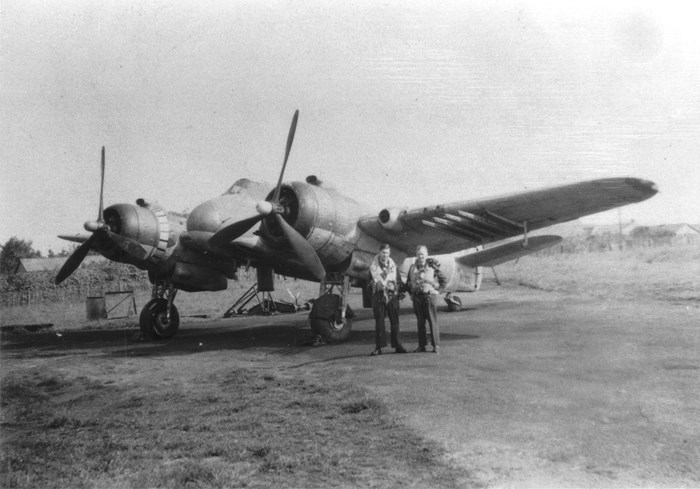 Beaufighter aircraft and crew at East Fortune Airfield in April 1945.

In April 1944, the first de Havilland Mosquitoes began to supplement the Beauforts and Beaufighters. To accommodate the new arrivals, a new hangar was built, adding a fourth to the south side complex. East Fortune began to receive the odd visitor on their way back from night operations over Europe. During one week in December 1944, 22 Handley Page Halifaxes and 18 Avro Lancasters were diverted from their home bases on return from raids on Germany.

With the war in Europe drawing to an end, the intensity of flying training decreased, but continued until the end of 1945. Yet flying activity actually intensified after the end of the Second World War as East Fortune was used as a staging post for the transportation of personnel to and from Scandinavia, using Short Stirlings, Halifaxes and Mosquitoes. From 30 September 1946, Fighter Command took over the site but only stayed until the end of the year with the departure of the RAF.

After the Second World War, the land requisitioned from the Sanatorium was returned and the tuberculosis hospital was set up again. The East Fortune Hospital remained open until 1997, occupying the northern side of the site, the dilapidated buildings still standing today.

After the Second World War, the East Fortune Airfield ceased to be used by the RAF. The runway was extended across the B1347 to take American bombers during the Cold War but was never used for this purpose.

By the mid-1950s, the Scottish Home and Health Department had requisitioned sections of the south side of the former aerodrome for storage of civil defence equipment in anticipation of hostilities erupting between East and West. Emergency service vehicles were stored in hangars, in particular Green Goddess fire tenders.

After tensions slackened, the Ministry for Agriculture and Fisheries took over the south site, and hangars and buildings were filled to the brim with foodstuffs. 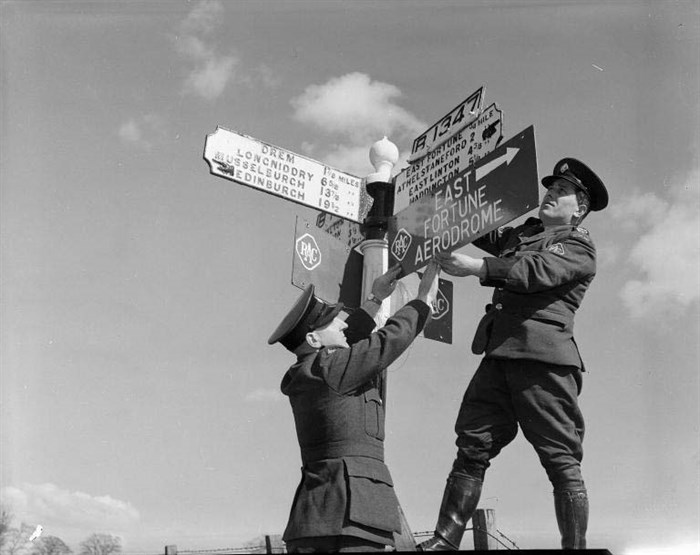 RAC patrolmen erecting a sign for East Fortune Airport in 1961.

Yet flying had not completely ceased at East Fortune. From April to August 1961 the main runway was opened while Edinburgh’s International Airport at Turnhouse was being redeveloped. A prefab village was opened on one of the cross-runways as the terminal and the wartime control tower was refurbished. Over the four-month period, some 99,800 passenger movements were recorded, though it was not without incident. A Vickers Viscount overshot the runway and on a separate occasion a Percival Pembroke crashed after take off near the coastal town of North Berwick – neither accident experienced any fatalities. 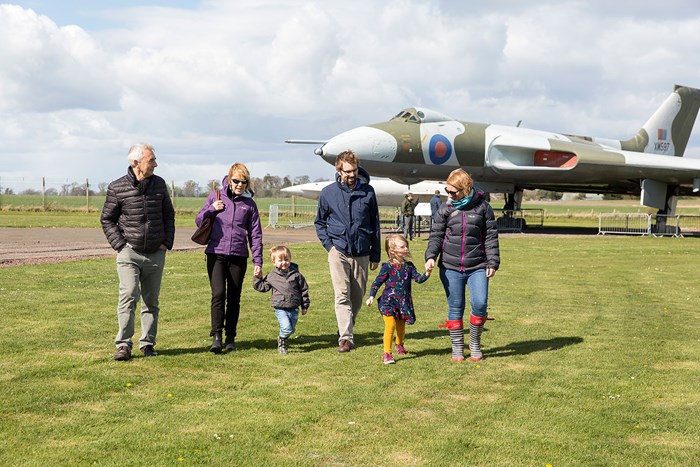 Present-day visitors at the National Museum of Flight.

The National Museum of Flight

In 1971, the Ministry of Defence donated a Supermarine Spitfire to the Royal Museum, Edinburgh. Due to lack of space to accommodate the aeroplane, permission was granted for the Museum to acquire one of the hangars on the former south side of RAF East Fortune as a storehouse for their aeronautical exhibits, and so the seeds were sown for the development of the National Museum of Flight. The museum officially opened to the public on 7 July 1975.

Today East Fortune still reverberates to the sound of aircraft engines, whether from low-flying RAF jets or from air displays put on by the museum. East Fortune may not be the most remembered of airfields but this once busy military site has earned its place in history.

More ways to explore the museum

Become a Member and receive discounts on Airshow tickets plus free access to the National Museum of Flight and special events throughout the year.