You are here Home > National Museum of Scotland > Things to see and do > Past exhibitions > Fossil Tales
Fossil tales and stories are as diverse as the civilisations that created them, legends grew up around these unexplained objects as a way to make sense of their origin and identity.

Fossil Tales was a small display, that brought together a range of fossils from National Museums Scotland's collection to explore some of the myths and early uses for fossils.

Palaeontology, the study of fossils, is a relatively new science. Fossils, the remains of once living plants or animals, can help us understand how some forms of live evolved and others became extinct. Some ancient scholars had realised the true nature of fossils, but it was not not until the 1700s that Europeans began to collect and classify fossils in a scientific manner. Before then fossils had been used and interpreted in many different ways by many different cultures. 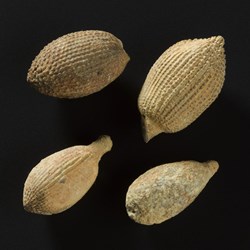 Fossils have always fascinated and intrigued people, but their true nature has not always been understood. Long before scientific understanding of fossils as evidence of ancient lifeforms, myths and legends were used to make sense of these unexplained objects.
More 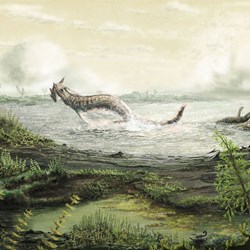 If the first four-legged animals had never emerged from water onto land, our world today would not exist. Yet how did this great step happen? The mystery is finally being solved – and fossils discovered in Scotland lie at the heart of the story.
More
Exhibition information