While reflecting telescopes came to predominate as large astronomical instruments in dedicated observatories, refracting instruments continue to be the most popular choice for portable instruments, from naval spyglasses to birdwatchers’ binoculars. They are frequently simpler to use and maintain and more robust.

National Museums Scotland's collections have recently been enhanced by a generous donation from Allan and Carol Murray of telescopes from the collection of the late Allan G Murray (1943 – 2016), who was born in Gullane, East Lothian and became a leading a Hong Kong financier and art collector. His first telescope was a gift from his father when he was 12 and this inspired a curiosity which ultimately led to his global career.

“
“His first awe-inspiring look at the night sky gave him a sense of the size of the world. It made him want to explore and understand the wider world, a desire which eventually took him to the Middle East and Far East.”
- Carol Murray

We were delighted to be offered first choice of his telescope collection amassed over many years. These greatly add to our collections and represent some important makers whose telescopes we had not previously had in the collection.  This gift has significantly enhanced the research potential of our holdings and we look forward to working with these fine examples of craftsmanship to explore their use by both amateurs and professionals. 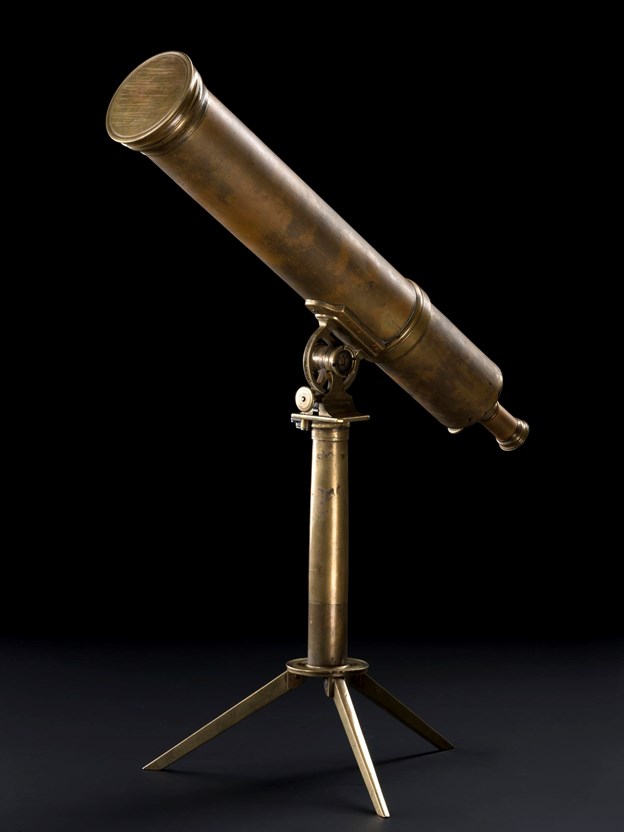 This compact telescope, like many in the collection, would have been a personal instrument, rather than part of the equipment of an observatory. It is the oldest telescope in the Murray donation, from about the 1760s.

Jesse Ramsden (1735 – 1800), was considered the leading telescope maker of his time, and made many improvements to instruments for astronomy or surveying. He was renowned for his perfectionism, but also for his tardiness, with major projects taking far more time than agreed or expected.

This telescope is an example of the smaller, simpler instruments which his workshop produced and which served to maintain a cash flow when his most significant instrument were years in production.

It has only a fairly basic adjustment to point it in the desired direction – it could be moved up and down and side to side, but without accurate angle measurements of its position. The main tube of the telescope unscrews and the tripod stand folds and slides inside it so that when disassembled it all fits compactly into its small wooden box for transport or storage. 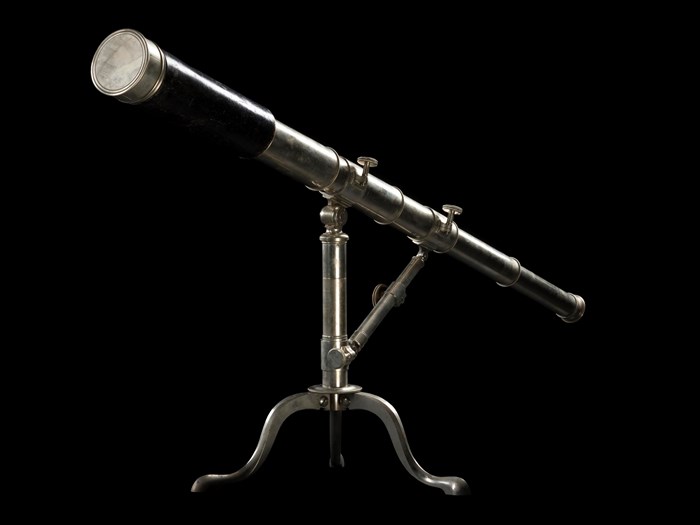 Very few scientific instruments made by Smith and Ramage of Aberdeen are to be found in museum collections. They were commissioned by James Clerk Maxwell to construct a number of pieces of custom apparatus (link to our dynamic top explore page) but most of their business was likely connected with nautical instruments and timepieces.

They are listed in some 1850s Aberdeen trade directories and post office directories as ‘opticians’ and in others as ‘watchmakers etc’, and other surviving items featuring their name include a watch and a ship’s compass card. It is unlikely that they actually manufactured this telescope, given the close similarity of some of its features to telescopes with other shop names on. More likely it was sold by Smith and Ramage, having been actually made in a workshop elsewhere.

Regardless of who made it, the telescope is clearly from the top of the range. It is made in German silver, a silver coloured alloy of copper, nickel and zinc which despite the name contains no silver. This metal is harder than the more commonly used brass, and is more resistant to corrosion so remains shiny for longer. The fitted wooden box contains accessories to use the telescope in several different ways.

It can be used hand held; mounted on a tripod with or without an additional diagonal support to hold it at a given angle; or the mount can be screwed into wood (such as a tree or post) rather than mounting it on the tripod.  The telescope comes with two additional eyepieces with very dark red filters for observing the sun. These eyepieces fit into an alternative first draw tube with rack and pinion focussing for precise focussing with these higher power eyepieces. 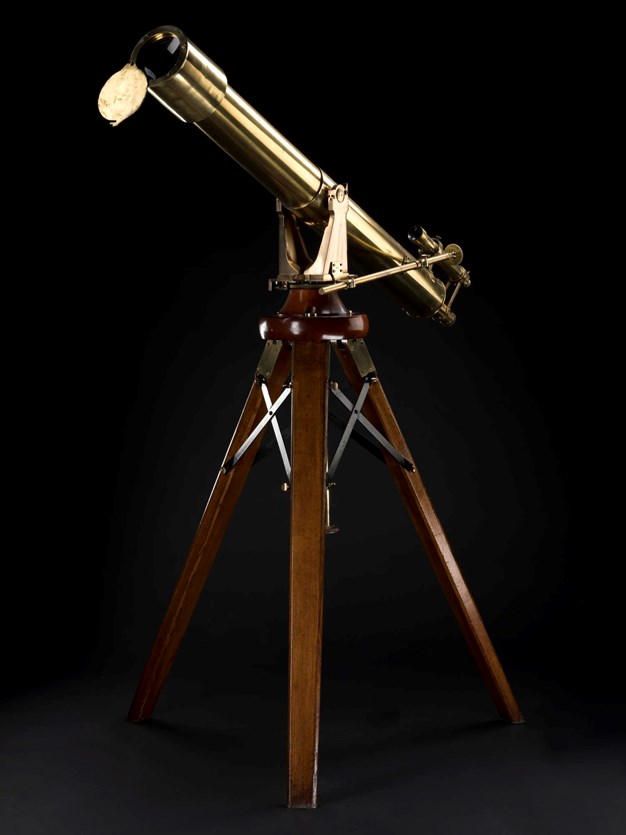 5 inch refracting telescope, made of brass, with brass finder telescope mounted between brass trunions, on a rotating table, with mahogany and brass tripod with iron fittings painted black, by Troughton & Simms, London, c. 1880

The largest telescope standing at 2m tall is also one of the most recent in this donation, made in about 1880 by Troughton and Simms a firm who made equipment for astronomical observatories round the world.

This telescope was advertised as a portable astronomical telescope. Portable is a relative term; it can certainly be moved unlike many astronomical telescopes which are built into observatories, but we found it takes three or four people to do so. The small sighting scope on top of the main tube has lower magnification and was used to point it in the right direction. This size of telescope was most likely to be used by amateur astronomers, or for educational purposes. 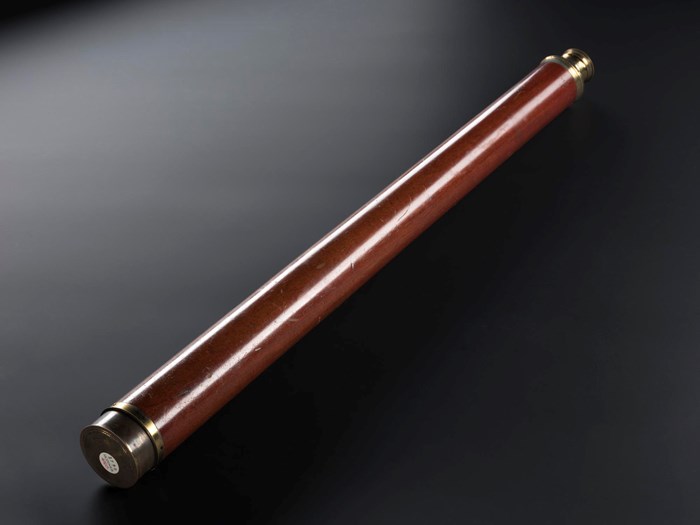 This telescope with a single focussing draw tube is of the kind often described as a marine or sea telescope. The optics are designed to give an image which is the right way up, bright and of only moderate magnification, for use scanning over a large area.

Some examples of these have alternative eyepieces which increase the magnification for astronomical use. There are holes drilled into the mahogany body tube of this telescope, which show that at some stage it was mounted onto a stand. It comes with an old canvas bag which is an unusual survival. 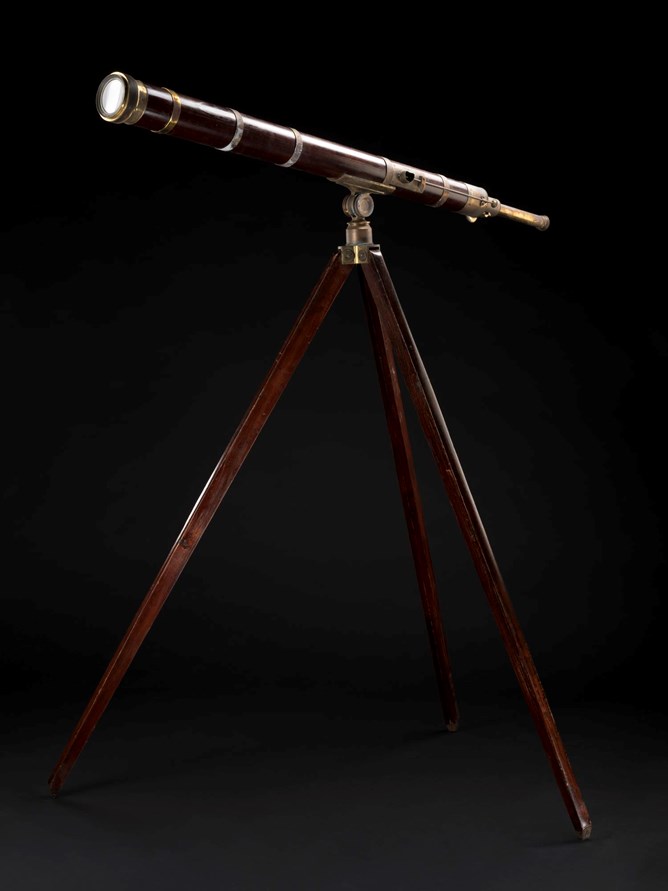 2 1/2 inch refracting telescope by A. Bardou 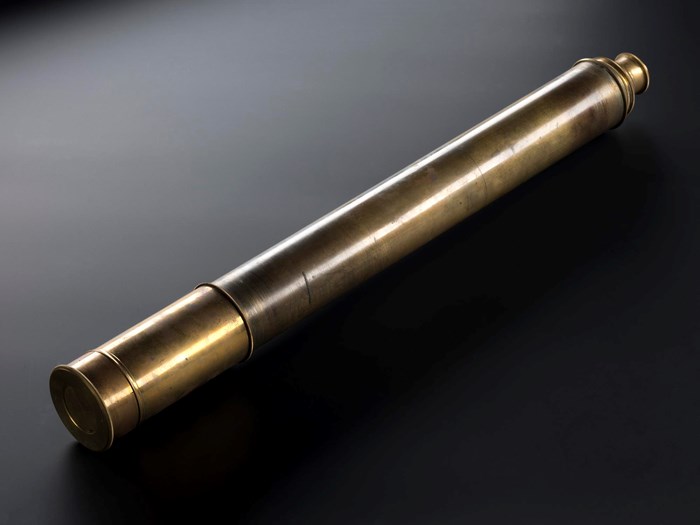 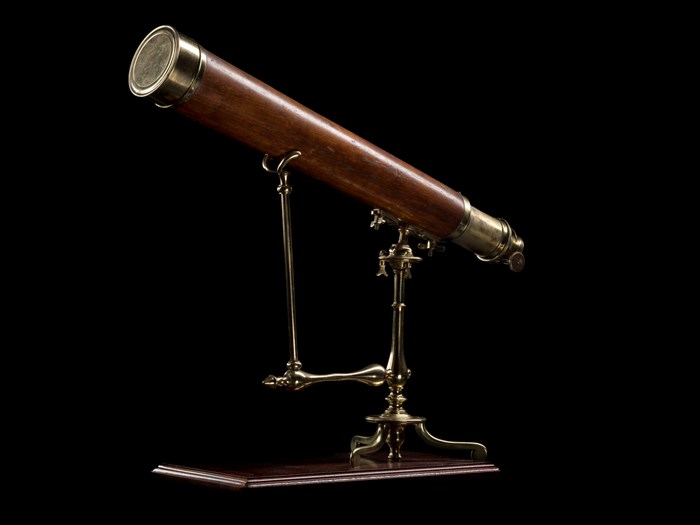 2 3/4 inch refracting 3 draw brass and mahogany telescope on brass tripod base with ball and socket stand and mahogany base, by E. Lorieux, Paris, c. 1840 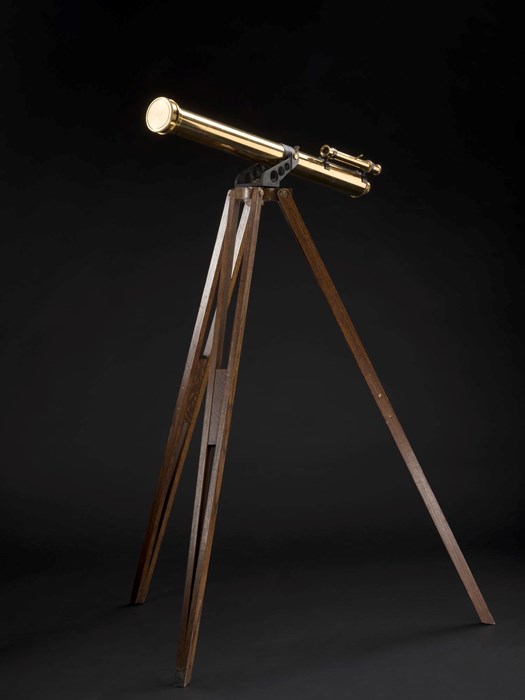