The growth of the anti-slavery movement in 18th-century Britain

This scenes on this teapot show, on one side two servants, a Black boy and a white woman, and on the other, a contrived, aspirational scene of an elite white British couple taking tea in a garden. These images are based on an original engraving by Robert Hancock published in a Drawing Book in 1757. Hancock’s design inspired a popular range of similar scenes that notably included a Black child servant and a dog portrayed in a way that denoted loyalty and obedience.

Tea-drinking, originally an expensive luxury for elites, spread in popularity throughout the 18th century. The accompanying demand for sugar soared as more British people enjoyed consuming hot sweetened beverages. The social ritual of tea-drinking in the home developed amongst the women who were part of the newly emerging middle class.

Boycotts of slave-produced sugar began after William Fox’s anti-sugar pamphlet was published by and widely distributed across the country in 1791. The most vociferous and influential supporters of abolition came from the metropolitan middle classes who were supporters of free trade.

Abolitionists used poetry and factual pamphlets to target middle-class women who were presumed to have greater compassion and sense of morality than men and could utilize their power in the domestic sphere, particularly around consumer choice. The pamphlets spurred tea-time conversation around the brutal reality of slavery, leading women and even children to spearhead family boycotts of the ‘loathsome portion’. By 1792, 400,000 British people had joined the boycott of West Indies sugar, which coincided with hundreds of anti-slavery petitions flooding the House of Commons. 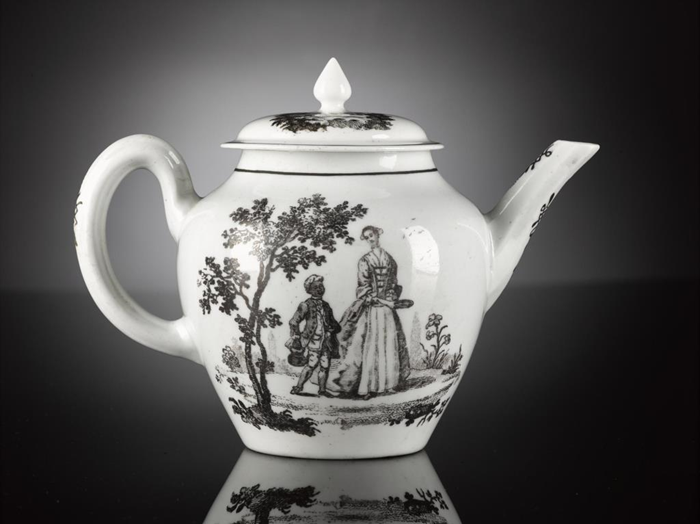 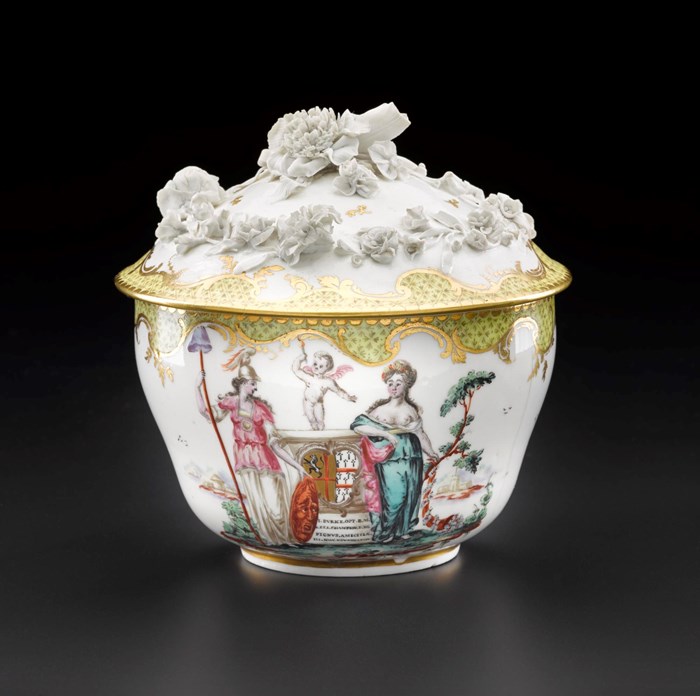 This tea service was commissioned in 1774 as a gift from merchant and porcelain manufacturer Richard Champion and his wife Judith, to Jane Nugent Burke to mark both the election of her philosopher husband Edmund Burke as a Whig Member of Parliament for Bristol and the major role that Champion had played in Burke’s success.

The elaborate decorations celebrated the political ideals attributed to Burke of ‘Liberty and Justice’. Burke had backed the repeal of taxation on tea in America and went on to support the American rebels in their later bid for independence from Britain. His special affection for them came from their ‘common names and kindred blood’ and their supposedly unique ‘love of freedom’.

Despite Burke’s advocacy for liberty and free trade in America, India and France, he drew the line at liberation movements by enslaved people in the Caribbean. Burke’s ‘Negro Code’, possibly written as early as 1780s, laid out a series of suggestions for regulating and improving conditions of the enslaved in the Caribbean but was also hoped to be a means to prevent resistance and protect the planters’ right to own enslaved people as property.

Burke was keen on religious instruction in order to ‘civilise’ the enslaved, with punishments in place for those who refused marriage. His friend, the statesman Henry Dundas requested that Burke send him an outline of the ‘Code’ just one week after Dundas' amended motion for ‘gradual abolition’ of the slave trade in April 1792 had won a huge majority in Parliament.

Burke died in 1797, but the measures that were put in place between 1812 and 1833, to ameliorate the conditions of the enslaved cross the Caribbean, were heavily influenced by his original plan.

The anti-slavery movement began to gather speed in Britain towards the end of the 18th century. Decorative items and fashion accessories such as these ivory plaques acted as important visual political statements against slavery. The British abolitionist movement used non-threatening images of enslaved Africans depicted in passive and supplicating poses to appeal to white audiences. Although we are more familiar with names of abolitionists like William Wilberforce, a range of other influential and radical speakers were well received on visits to Scotland or came from Scotland itself.

Black abolitionists and authors Oluadah Equiano and Ignatius Sancho received a warm welcome on their visits to Scottish cities, and Scottish-African Robert Wedderburn left Jamaica to become a revolutionary speaker, minister and author in Britain. William Dickson from Moffat in Dumfriesshire and Zachary Macauley from Inverary, both horrified by their experiences in Caribbean slave colonies, became key players in the abolition of the slave trade.

Edinburgh-born Henry Brougham used his position as an MP to close loopholes in the slave trade laws and to highlight ongoing abuses of the formerly enslaved under the ‘apprenticeship’ system which lasted until 1838. In a speech in Edinburgh in 1830, which was likened to the ‘bursting of a bomb’, evangelical minister Andrew Mitchell Thomson condemned calls for the gradual abolition of slavery and accepted that violent insurrection on plantations might be the only viable route to freedom. Ladies’ Emancipation Societies became increasingly influential in the following decades, including many across Scotland. 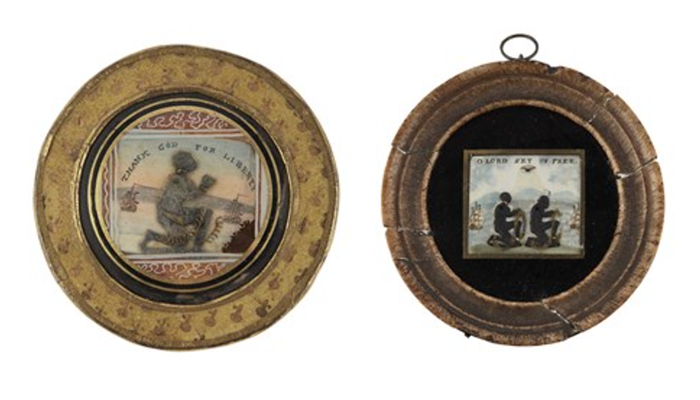 Two plaques depicting enslaved Africans kneeling in metal shackles and chains with slave ships at sail in the distance.